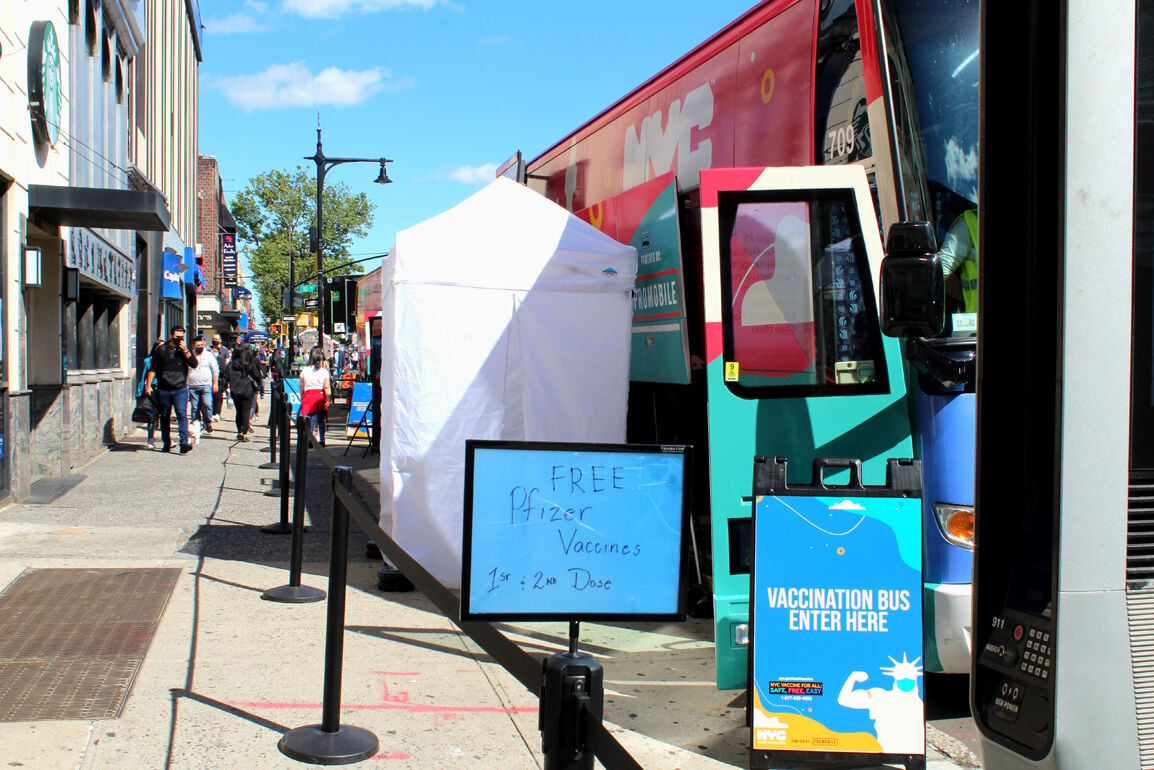 As health officials try to reach more of the vaccine-hesitant population, the city rolled into Astoria, above, and Rockaway this week with buses set up as mobile inoculation sites. See the latest on which parts of Queens are leading and lagging when it comes to vaccines, and what’s being done about it, inside. 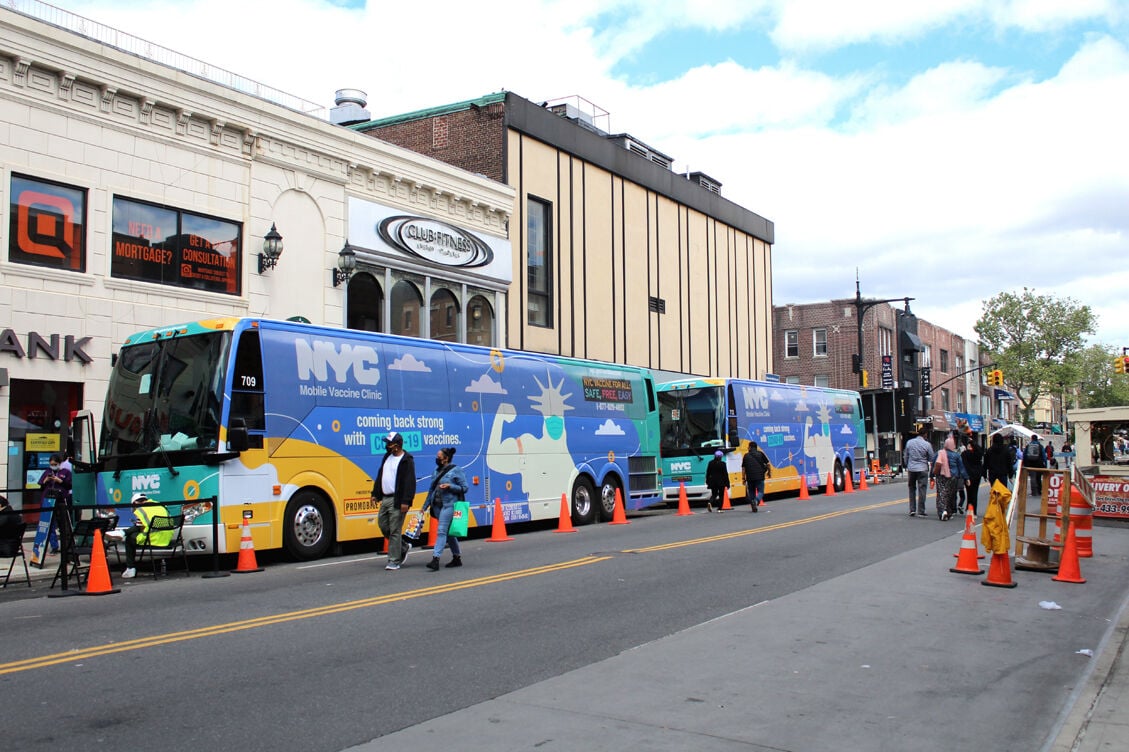 Two mobile vaccine buses were on Broadway in Astoria on Monday, set to stay through Wednesday. The first bus is where doses were given and the second bus was for post-shot observation. 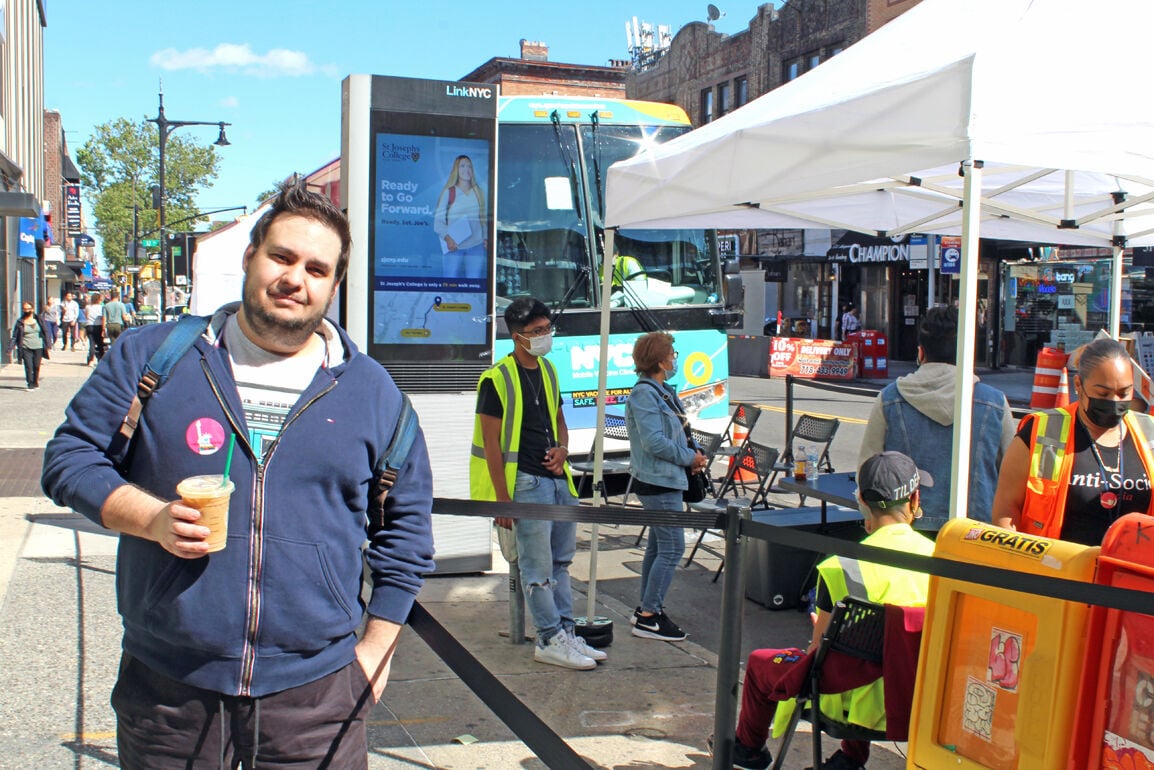 Tom Ninos got his second shot there after being told he’d have to wait for months in Canada, where he’s temporarily living.

As health officials try to reach more of the vaccine-hesitant population, the city rolled into Astoria, above, and Rockaway this week with buses set up as mobile inoculation sites. See the latest on which parts of Queens are leading and lagging when it comes to vaccines, and what’s being done about it, inside.

Two mobile vaccine buses were on Broadway in Astoria on Monday, set to stay through Wednesday. The first bus is where doses were given and the second bus was for post-shot observation.

Tom Ninos got his second shot there after being told he’d have to wait for months in Canada, where he’s temporarily living.

Tom Ninos was turned away for a Covid-19 vaccine at a CVS on Memorial Day and was on the way to get coffee when he noticed two huge mobile vaccine buses covered with bright graphics on the corner of Broadway and 31st Street in Astoria.

“I just came to get some Starbucks and saw the bus, so I figured it was a good opportunity,” said Ninos, 31, who is originally from Astoria and is moving back after three years in Canada. “The vaccine rollout there has not been great,” said Ninos, who got his first shot in April in Canada. “The second appointment they put me in for wasn’t until September which would render the first one useless.”

The Centers for Disease Control and Prevention recommends getting the second shot within three to four weeks, and not beyond six weeks.

The mobile vaccine buses are part of a push by the city to boost vaccination rates after numbers have dropped to the lowest in months. On Sunday, only 6,512 shots were administered, compared to 72,661 a month ago.

The buses were launched in early April and aim to reach neighborhoods hit hardest by the pandemic. They are operated by Promobile and assisted by NYC Health + Hospitals and the Test and Trace Corps. City employees and community organizations are contributing with outreach including canvassing and posting fliers.

And this Memorial Day weekend provided a new type of incentive: Those who got their first Covid-19 vaccine this past weekend can be fully vaccinated for Fourth of July celebrations if they follow the exact timeline. That includes the 21-day period between the first and second shot plus the two weeks it takes to build immunity, according to the CDC. Moderna shots would have been needed by the 23rd and Pfizer shots by the 30th. The buses offered Pfizer shots to anyone ages 12 and older, free of charge, with only an ID required. That will make Fourth of July “picnics and barbecues far less sad,” the city Department of Health and Mental Hygiene said in a press release.

“Most people who wanted to get the vaccine have gotten it. The low-hanging fruit has been picked,” said Dr. Bruce Farber, chief of infectious diseases at Northwell Health’s Long Island Jewish Medical Center and North Shore University Hospital. “The late come-alongs are a much more difficult and slow group to chip away at.”

In addition to vaccine hesitancy, geographic locations are a factor. The City’s Task Force for Racial Inclusion and Equity identified “priority populations” and neighborhoods that were hit hardest by the virus as well as those that face historical socioeconomic disparities. Black and Hispanic people have lower rates of vaccinations, according to data from the Health Department.

“It’s now becoming apparent that for many people, people who work seven days a week, people that have trouble getting out of their home, getting to these large sites and getting an appointment has been a barrier to actually getting the vaccine,” said Dr. Teresa Amato, chairperson of emergency medicine at LIJ Forest Hills and director of geriatric emergency medicine for Northwell Health. “We’re changing how we’re looking at this and starting to make programs for going into homes for homebound folks.” Sixty-five percent of city seniors are fully vaccinated, and 72 percent have gotten at least one dose. But vaccinations for seniors in Queens lag behind Manhattan and Staten Island numbers.

Data from the city shows a geographic divide in vaccination rates for Queens, too. Residents of Southeastern Queens have much lower rates of vaccination compared to northern areas, with Breezy Point in the southwest also among the most inoculated. As of last weekend, Long Island City was at the top of the list with almost 70 percent of its residents fully vaccinated. Breezy Point was second at 68 percent and Flushing, Murray Hill and Queensboro Hill had 65 percent. Also among the top 10 most-vaccinated ZIP codes were Flushing, Bellerose, Hollis Hills, Douglaston-Little Neck and Bayside North. At the bottom of the list were Edgemere and Far Rockaway with only 24 percent fully vaxxed, followed by Arverne and Laurelton.

So a vaccine bus parked on Shore Front Parkway in Rockaway Beach this weekend was a welcome sight to residents looking for a vaccine site available for walk-ins. Despite the rainy weather, dozens of people were able to get first and second doses, and the buses will be returning in the coming weeks.

Eric Wakschal, 59, of Far Rockaway, tried once to get a walk-in vaccine at a CVS but was told to make an appointment online and come back. Then, he saw the bus while biking and called his wife immediately.

“I’ve been thinking about doing it for a while; I just happened to be hesitant,” Wakschal said. “This was very convenient. I told my wife to come down here and get it too, so maybe she’ll come next weekend.”

Besides the mobile buses, other pop-up sites can be found across the boroughs. This past week, VIP StarNetwork, a private company that provides Covid health services for film studios and sporting events, set up one-day-only pop-up events in Queens, Manhattan, Staten Island and the Bronx, looking to serve low-income areas that lack access to vaccines.

“We’re going to have multiple pop-up sites across areas of Queens throughout the entire summer,” said CEO Johonniuss Chemweno.

On Friday, the company administered almost 100 shots to patients at Sunnyside Community Services. “The pop-up sites are having a level of success in being able to set up locations same day and then move on to a new location to make sure there’s equitable access to vaccines across the entire State of New York,” said Chemweno.

“Our ability to partner with community centers such as Sunnyside Community Services allows participants to come to a place they know and trust in terms of getting the right information,” he said. He hopes that model for education and outreach can eventually provide access to care for other healthcare needs like diabetes and high cholesterol.

Getting trusted information is what pushed Omar Ortega, 40, to get his first shot on the NYC Mobile Vaccine Clinic bus in Astoria on Monday. He felt insecure about getting the vaccine, he said, and had many questions. He wondered which vaccine he would be getting, if he would have to pay and what information he would need to provide. “Latino people are really insecure because we need to get more information,” said Ortega, who is an immigrant from Mexico.

“I didn’t make any plans to get it, but it was easy. The people need to see, it’s easy. I am very happy, satisfied,” said Ortega. “It’s there, why not?”

Amato’s priority is remaining nonjudgmental when having conversations about such hesitancy, she said. “Hesitancy is different for everybody, whether it’s fear or concern about the science or the newness of the vaccine. I would say many people fall in the category of wanting to wait. Some are waiting for the FDA to give the approval, not just for emergency use but the actual authorization.”

Amato says she tries to educate people about the vaccine and explain how it works. “The gist of it is, it’s exposing you to just the spike protein mRNA,” she said. Covid-19 mRNA vaccines give instructions for the cells to make a harmless “spike protein,” according to the CDC. Then, the mRNA and spike proteins disintegrate and if you are exposed, the body triggers an immune response, Amato said.

“What I try to explain to people is that Covid will do this to you or the vaccine will do it to you in a very controlled way, which only does a small part of the virus, which won’t make you sick.”

Amato said she is discouraged by encounters with patients who test positive for Covid yet still refuse the vaccine, but she is hopeful for “some form of herd immunity that will stop huge outbreaks.” As of Monday, 43 percent of New York City residents were fully vaccinated, and 51 percent had had at least one dose. Queens ranks second for the most partially and fully vaccinated residents, behind Manhattan. Over a million Queens residents are fully vaxxed, according to the Health Department.

“I think this summer is going to look a lot different than last summer,” Amato said.

Ninos, the Astorian temporarily in Canada, had an answer as to his summer plans as soon as he stepped off the bus. “Hopefully vacation! I’m hoping to go to Europe now that they’re allowing vaccinated people in. I’ll be able to enjoy the summer — maybe see a beach this year.”