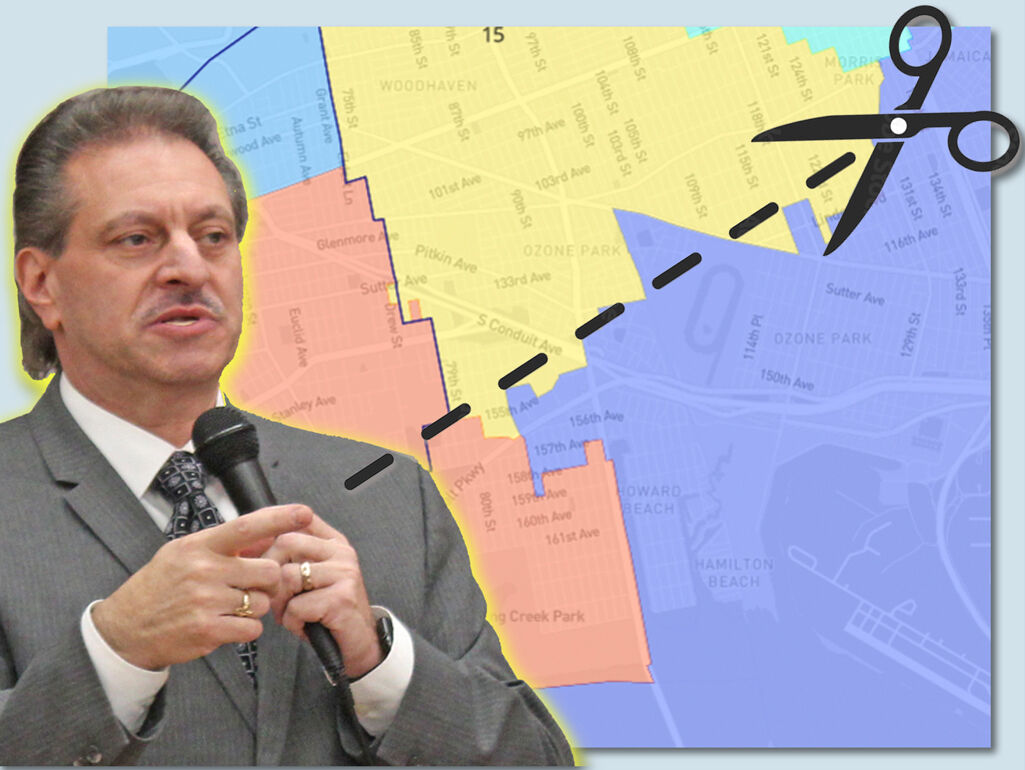 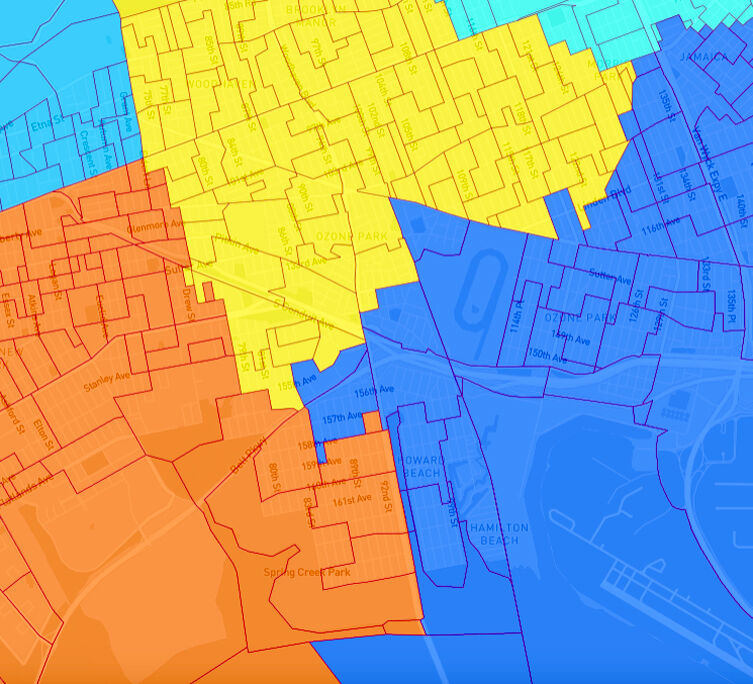 Howard Beach would be split down the middle along Cross Bay, under new state Senate maps.

Howard Beach would be split down the middle along Cross Bay, under new state Senate maps.

Community leaders in Howard Beach are outraged at the newly proposed state Senate maps, which would divide their district into three different ones.

The maps, which are redrawn every 10 years based on Census data, are expected to be finalized by Friday.

With the newly proposed lines, Addabbo’s 15th Senate District would be limited to Middle Village, parts of Forest Hills, Woodhaven, Ozone Park but not South Ozone Park, most of Lindenwood but not Old Howard Beach, Hamilton Beach or anywhere south of those neighborhoods. Resorts World and Aqueduct Race Track would no longer be in his district, but in Sanders’.

The central part of Addabbo’s district would be consolidated with more of Forest Park, Richmond Hill and South Richmond Hill. It would stop just north of the Belt Parkway and Resorts World.

Rockwood Park, the new side that is west of Cross Bay Boulevard, would be the only Queens neighborhood in Persaud’s district, which encompasses Southeast Brooklyn.

On Wednesday, Addabbo sent a letter to Judge Patrick McAllister of the Steuben County Supreme Court and Jonathan Cervas, the special master who drew the maps, requesting that Howard Beach be included in Senate District 15.

“To keep the tightknit, diverse working class families of the 11414 communities wholly within Queens County would better serve the residents due to the historical ties and common interests within itself and shared with the communities to the north in the proposed 15th Senate District, as opposed to being placed in the 19th Senate District in Brooklyn County,” he wrote.

He said he has spoken with Persaud and that she agreed to relinquish 11414 and that it makes sense to keep it in the 15th Senate district.

Addabbo cited ongoing resiliency projects dating back to Hurricane Sandy; a desire to keep the school districts whole; the shared NYPD 106th Precinct, Community Board 10 and other groups; and the Cross Bay business district and transit lines including the ongoing bus redesign that affects the whole neighborhood.

“One ZIP code, less than 30,000 people, divided up into three different Senate districts — That’s unconscionable to do to a community,” she said, referring to the 11414 ZIP.

She said that it means that, for 10 years, “a community will suffer.”

“Redistricting is supposed to take geography into consideration,” she said, adding that she believes it would make more sense to use geographic distinctions and landmarks like the north shore of Jamaica Bay, JFK Airport, the Brooklyn county line and Forest Park as barriers.

Frank Gulluscio is the Democratic district leader for Assembly District 23 and he called the splitting up of the ZIP codes “mind blowing.”

“I am very concerned that the neighborhoods are split up even worse than before,” he said.

He said that political circles are “up in arms” about the new maps and he thinks the general public will be, too, when residents realize they might be in new Senate districts.

According to the New York State Independent Redistricting Commission, a “community of interest” shares social and economic interests and should therefore be included in a single district for “effective and fair representation.” The interests do not include political affiliations but can include similar standards of living, shared methods of transportation, or similar economic and societal concerns.

Braton argues that the new maps split up the areas of interest in the southern portion of the district, especially considering that it groups the west portion of Howard Beach in with Brooklyn park space and Old Howard Beach and Hamilton Beach with the airport.

“Howard Beach has a great deal more in common with Ozone Park and Woodhaven in terms of all community issues than with the areas to the east and west of us,” she said.

Having to work with new representatives means a “learning curve” and “diluted” ability to work together on important issues in the area like the ongoing resiliency efforts in flood-prone neighborhoods, something that Roger Gendron of Hamilton Beach knows well, too.

Over the last 10 years, Gendron says that the community worked with Rep. Hakeem Jeffries (D-Brooklyn, Queens) on environmental projects including Spring Creek studies. When the new congressional lines were announced in February, they changed his representative to Rep. Greg Meeks (D-Queens, Nassau), which Gendron saw as a setback because they would have to catch him up on the issues. Gendron would prefer to see the communities of interest group them with areas of coastal Brooklyn that share similar environmental vulnerabilities.

“The thing that bothers me is, when they drew the congressional maps, they wanted to try to put everybody within the same borough. That’s what I was told. So that’s why we were removed from Hakeem Jeffries’ district and moved back into a Queens district with Greg Meeks,” he said, which makes the moving of only part of Howard Beach to Brooklyn in the new Senate maps especially confusing.

He, Braton and Gulluscio are also sending letters opposing the maps to the Steuben County State Supreme Court judge who appointed the special master who drew them.

Gendron fears the plan will also disenfranchise voters who have two election dates this year: June 28 to choose candidates for most offices including governor and the Assembly, and Aug. 23 for the congressional and state Senate seats.

He wonders if any other senators would be willing to keep their district office in Howard Beach as Addabbo’s is and which Gendron says is extremely accessible even for those in the outskirts of Hamilton Beach.

“My gut feeling is one or two high tides and no, they’re going to go, ‘What the hell am I doing here?’” said Gendron, referring to flooding and fearing that would set the community back on 15 years of progress.

“Nobody knows this community better than Joe does,” said Gendron of Addabbo, who has represented the area since 2001, first in the City Council, prior to the Senate.

“Joe is a mainstay in this community,” he said.