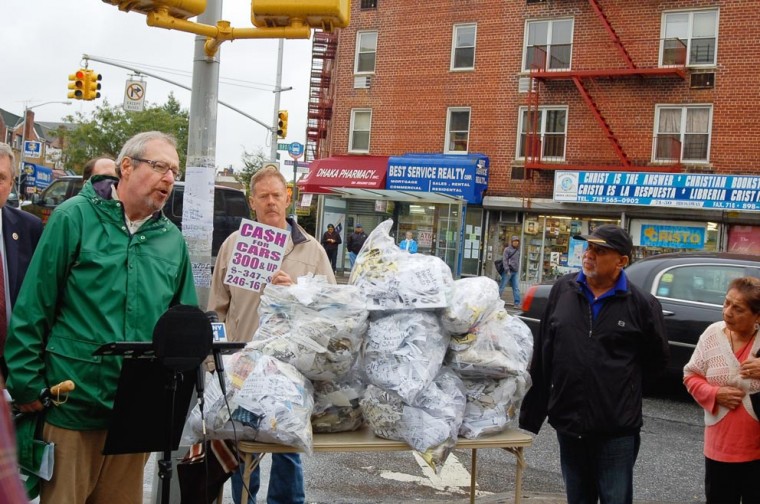 Jerry Wind, president of the Bellerose Hillside Civic Association, left, spoke about the blight of illegal ads throughout Queens on Tuesday afternoon. 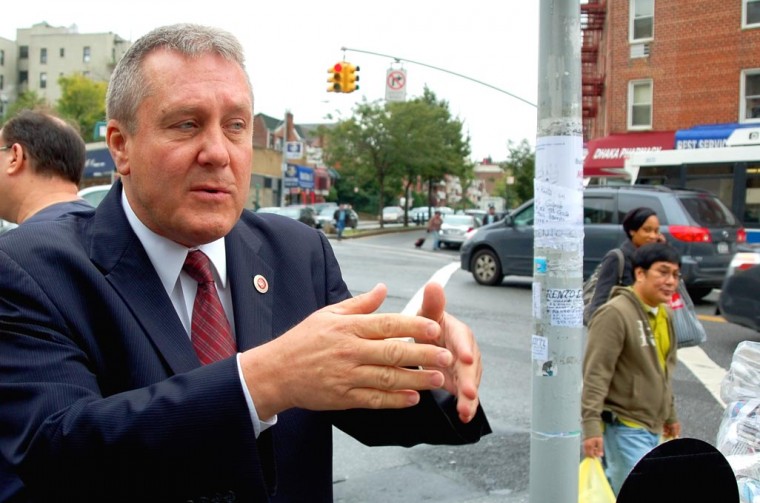 Councilman Danny Dromm says many of these advertisements lead to scams.

Jerry Wind, president of the Bellerose Hillside Civic Association, left, spoke about the blight of illegal ads throughout Queens on Tuesday afternoon.

Councilman Danny Dromm says many of these advertisements lead to scams.

“Our neighborhoods are flooded with these signs,” Bellerose Hillside Civic Association President Jerry Wind said, while standing in Jackson Heights next to bags filled with advertisements collected from Queens streets. Dromm’s office plans to shred fliers at a shredding event on Saturday.

Laws prohibit the placement of signs on public property such as lampposts, trees, bus shelters and street lights, but nevertheless, businesses still do it. If caught, the advertisers are faced with a $75 fine, which could be increased to $225 per advertisement, if Weprin’s proposed amendment is approved.

“My hope is that increased fines will deter advertisers,” Weprin said.

Both council offices receive complaints from residents about the illegal ads — “it goes from Western Queens to Eastern Queens,” Dromm said.

He added that many of the illegal advertisers attempt to rip off those who respond to them. Dromm’s office has contacted the businesses, which he said are “unresponsive to and uncooperative with our requests that they cease their illegal advertising.”

In addition to possibly fraudulent scams the ads are an eyesore and can leave a permanent mark on public property, even after they are taken down. Exposed nails sometimes used to affix the ads also present a hazard.

“Now that those who post these signs are resorting to cementing them to the metal poles, traffic signs, traffic boxes and street signs, the illegal signs are damaging public property,” said Michael Augugliaro, a member of the Queens Colony Civic Association.

Civic leaders and politicians point to a lack of enforcement by the Department of Sanitation for the proliferation of advertisements that are displayed for free. Dromm said that some cafes and bodegas allow people to post ads in their establishments, which can be monitored more closely by owners than if the ads are posted outside.

“The Department of Sanitation is doing a lousy job of enforcing,” Weprin said. “The number of illegal signs is multiplying and we must increase both fines and enforcement to discourage this pattern from continuing.”

There are 25 sanitation officers dedicated to enforcing illegal posting violations citywide, the DSNY said. For the 2011 fiscal year 45,293 summonses were written.