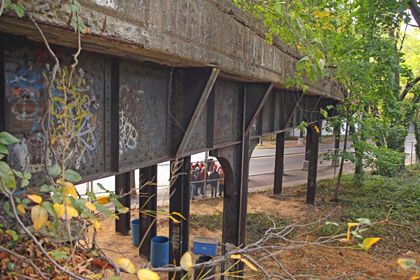 Twenty-one abandoned rail bridges, such as this one over Yellowstone Boulevard, would have to be replaced between Howard Beach and Rego Park in order to restore train line service from South Queens, says a new report. 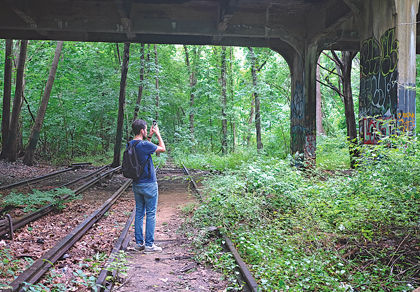 The Rockaway Beach Branch rail line has been reclaimed by nature since it was abandoned by the LIRR more than 50 years ago. Putting it back into service as a train route would be hugely expensive but could cut commuting time to Manhattan by half, says a study.

Twenty-one abandoned rail bridges, such as this one over Yellowstone Boulevard, would have to be replaced between Howard Beach and Rego Park in order to restore train line service from South Queens, says a new report.

The Rockaway Beach Branch rail line has been reclaimed by nature since it was abandoned by the LIRR more than 50 years ago. Putting it back into service as a train route would be hugely expensive but could cut commuting time to Manhattan by half, says a study.

Sounds too good to be true.

However, there’s a catch. It’ll cost a small fortune, according to the MTA.

The cost to reopen the line as a spur of the Long Island Rail Road is estimated at $6.7 billion.

If the MTA converts the right of way to a new subway line, the cost would jump to $9 billion — about the same cost as building the recently completed portion of the Second Avenue subway in Manhattan.

The subway ride would take about 45 minutes, the report estimates.

Commissioned in 2016 and released nearly two years after it was first promised, the report is a “sketch planning level” engineering assessment of what it would take to rebuild the 3.6-mile LIRR line originally built in the 1880s and closed in 1962 for lack of ridership.

Remnants of the old line from Forest Hills to Howard Beach are still visible — mostly as rusty, graffiti-covered train bridges that run parallel to Woodhaven Boulevard.

The right of way is now overgrown with trees and brush and is visited these days only by intrepid, urban hikers.

“This is really a big step,” said former state Assemblyman Phil Goldfeder, who commissioned the report.

“It’s the first time in a really long time we have the chance to create a new line,” he said.

“On any rail system, the most valuable asset is the right of way. And that we have. We don’t have to acquire any land, put anyone out of their homes.

“This is not only feasible,” Goldfeder said, “but the only way to improve public transportation in Queens.”

Transit advocates, however, are not the only ones with designs on the right of way.

A powerful lobby has grown in the past few years advocating that the land be made into a linear park, similar to the High Line in Manhattan.

The final decision will be up to Gov. Cuomo, who so far has avoided saying whether he favors a park or a train line.

The report — written by the MTA, a state agency under Cuomo’s control — is steadfastly noncommittal too.

After years of engineering study and cost estimates it called the train proposal simply “an option.”

Reopening the line would require replacing 21 bridges along the right of way as well as all the track. The MTA would also have to rebuild four or five passenger stations and install power stations and a new signal system, the report concluded.

The report was released without comment or any of the other fanfare that usually accompanies a long-awaited study such as this. Asked to comment on the report’s findings, an MTA spokesman declined to respond.

Meanwhile, the agency released a companion report at the same time, estimating the cost of a so-called “one-seat ride” — meaning a trip with no transfers — from Midtown Manhattan to JFK International Airport.

The projected cost is an additional $10 billion, the report said, for a total of $19 billion.

That’s equivalent to one-third of the MTA’s entire capital budget for the next five years.

While essentially an engineering study to determine if it was possible to build a new line, the report is also a political document that will be the basis for future debate on whether it would be worth the cost.

“It looks like they made the cost high so that people will dismiss it,” said Rick Horan, director of Queens Rail, an advocacy group.

“I knew it was going to be a big-B number,” Assemblywoman Stacey Pheffer Amato (D-Rockaway Beach), who succeeded Goldfeder, said of the projected costs.

“But I ignored that part and focused on the 25 minutes,” she said. “I’m excited.”

This line is important not JUST for a quick trip to Howard Beach or a one-seat ride to the airport, which it could very efficiently provide. (The AirTrain has been located conveniently with that in mind.) The junction with the main line at Rego Park is indispensable for providing future capacity for the Main Line itself. It would allow a better storage option for putting trains in service at Jamaica than the yard north of the station there currently in use, which was adapted for longer trains a while ago through means of some dicey track geometry. It only holds six trains. The yard should be closed and the property developed, preferably to benefit the LIRR. By adapting the nearby, and larger, Morris Park Yard for storage, trains providing a stop at Richmond Hill could be originated there, and, with a connection to the Rockaway Beach Branch at Glendale Junction, would provide alternate service to and from Jamaica and points east, with three additional stops served: Richmond Hill, Glendale Junction and Rego Park. In the interest of having sufficient capacity to handle both this service and the likely-frequent one-seat ride to the airport, the connection to the main line should be upgraded from the present (disused) two tracks, to four. The Main Line already has bridges to handle six-tracks running west from Rego Park, and they appear to be serviceable.