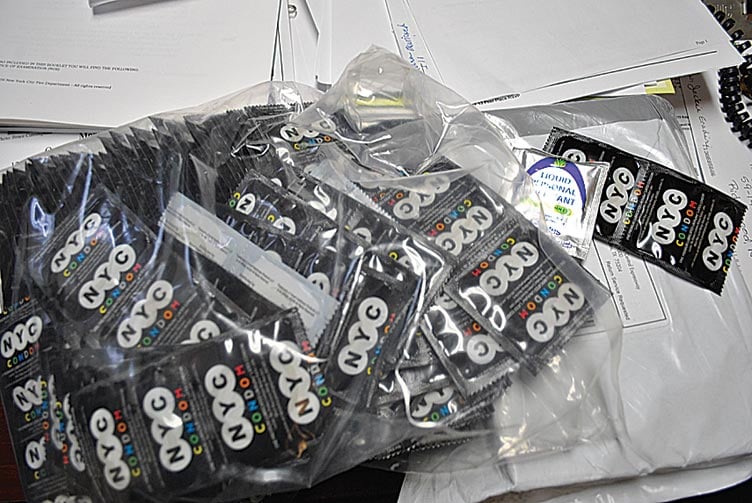 The Ridgewood Older Adult Center and other senior facilities citywide receive free stockpiles of condoms to distribute to their members.

This PSA poster is just one way an elder advocacy group is spreading its message.

The Ridgewood Older Adult Center and other senior facilities citywide receive free stockpiles of condoms to distribute to their members.

This PSA poster is just one way an elder advocacy group is spreading its message.

More seniors are having sex, and since many of them are newly single for the first time, that also means they may not know how to use a condom, or may not want to. As a result, older adults are becoming more likely to contract sexually transmitted diseases.

The city’s Department of Health distributes male condoms, female condoms and lubricant to more than 3,500 venues citywide though the NYC Condom Availability Program. Some 245,000 condoms went to senior centers across the five boroughs in 2012, an agency spokeswoman said in an email.

The increase in intercourse among seniors, some believe, is due to the advent of drugs like Cialis and Viagra, which correct erectile dysfunction and make sex possible for many men who were otherwise unable to engage in it, according to the AARP and senior advocates.

Besides ED drugs, other medications are helping seniors remain sexually active. There are hormone replacements, which can help promote virility. Progesterone and estrogen creams make sex more comfortable for women. And testosterone-replacement drugs are known to boost libido in both men and women, according to the AARP.

But such drugs can create unintended problems.

“You may have a guy who has eight [Viagra] pills in his pocket and will say, ‘Do you want some?’” explained Jacqueline Eradiri, the executive director of the Ridgewood Older Adult Center. “No, that’s not your doctor. He’s acting like a drug dealer. So, you need to get them from your doctor, because they can have some really serious side effects.”

But Eradiri said she sees nothing wrong with elders having sex if they are physically capable of doing so safely.

Eradiri said frisky clients at her center sometimes have sex at the facility — in the bathrooms, or in the loft, and although they’ve never been caught in the act, they have been “found in various stages of undress.”

Many elders have been married to the same partner for decades and have never worried about safe sex, so when they become widowed the idea of using a condom is foreign to them. Since their advanced age has wiped out the possibility of pregnancy they may believe that protection is not needed, Eradiri added.

In order to create awareness about safe sex, Eradiri periodically invites healthcare professionals to the center to speak on the subject and demonstrate how to put on a condom, which they do using a banana.

“It’s like a question-and-answer session,” Eradiri explained. “We tell them this is really serious. This is for you guys. It’s not for me, because sometimes the conversation got kinda heated, especially when they were talking about philandering men, or men who have more than one partner.”

Eradiri has in her desk drawer a bag filled with condoms and an equal amount of individual packets of lubricant. She says the DOH provides the center with 1,000 of each, and clients ask her for the items whenever they need them.

But not every senior center is so liberal when it comes to sexuality. Judy Ascherman, assistant director of the Howard Beach Senior Center, said she does not feel comfortable distributing condoms to its clients, and so she refuses the free ones that are offered to the center by the DOH.

Still, the message of protecting oneself from STDs is making its way to older adults.

SaferSex4Seniors.org, a website created by an independent collective of professional sexuality educators, researchers, authors, trainers and counselors to teach elders about protected intercourse, has raised some eyebrows with a risque public service announcement campaign, which includes a commercial and print posters depicting seniors in various sexual positions followed by the slogan — “There are many ways to do it. There is only one way to do it safely. Use a condom.”

As people age, their immune systems tend to weaken, and other health problems make them more prone to infection. Medications for heart disease, hypertension and diabetes also cause seniors to be more susceptible to STDs, the AARP says. And because STDs often have no symptoms at first, they frequently go untreated and are easy to unknowingly transmit.

Pat Bishop, the executive director at the Rockaway Boulevard Senior Center in South Ozone Park, said that the DOH does not send her facility condoms, but that its parent group [Jamaica Service Program for Older Adults] has a grant-funded department with staffers who come to the location to talk about safe sex and the spread of AIDS. “I’ve never had an issue with seniors having sex at the center, but the spread of disease is still a concern,” Bishop said.

Betty DeBaptiste, 75, a retired nurse and an HIV coordinator with JSPOA, periodically gives classes on safe sex. They include the screening of a film in which elder adults discuss the topic as well as demonstrating how to use both male and female condoms.

“I see nothing wrong with it, as long as they practice safe sex,” DeBaptiste said of active seniors. “I always tell them while I’m doing the demonstrations that if they feel uncomfortable they can leave the room, but only one or two have ever done that. They want to see.”

And DeBaptiste is not the only one who is open when it comes to sexuality. Her then-98-year-old mother once had an HIV test, when free ones were offered at her church, even though, according to DeBaptiste, she was not sexually active. “She just likes to be involved in everything,” DeBaptiste explained.