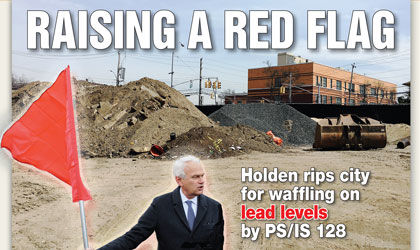 Councilman Bob Holden has spent the last week taking the city to task in private and public over dirt being stored uncovered — until this week — across the street from PS/IS 128 in Middle Village. The lawmaker said a senior Department of Design and Construction manager told him there were high levels of lead in the soil, while other city employees sang a different tune. 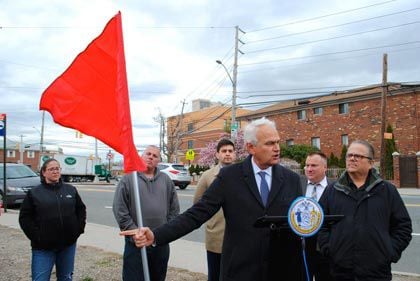 Councilman Bob Holden declares a CAC Industries lot a “red flag site” on Tuesday, a few days after he learned potentially hazardous soil was being housed there, mere feet from PS/IS 128.

Councilman Bob Holden has spent the last week taking the city to task in private and public over dirt being stored uncovered — until this week — across the street from PS/IS 128 in Middle Village. The lawmaker said a senior Department of Design and Construction manager told him there were high levels of lead in the soil, while other city employees sang a different tune.

Councilman Bob Holden declares a CAC Industries lot a “red flag site” on Tuesday, a few days after he learned potentially hazardous soil was being housed there, mere feet from PS/IS 128.

A $22 million sewer main project in Middle Village that was nearing completion suddenly stalled in December, and no one in the community knew exactly why.

There was some talk among area leaders that workers were transferred to another job site or that they had various problems digging into the ground.

But on Tuesday, Councilman Bob Holden (D-Middle Village) said the real reason for the project’s halting was much scarier.

“The Department of Design and Construction sent four representatives to my office on Friday and they told me the project stopped because of contaminants in the soil,” Holden said. “I asked one gentleman what were the contaminents in the soil.

“He said high levels of lead.”

As if that wasn’t a big enough issue, the lawmaker said that problematic soil that had been excavated during the Penelope Avenue sewer work is sitting in a yard leased by CAC Industries — the project contractor — across the street from PS/IS 128, a K-8 school in Middle Village.

The massive mounds of dirt had been sitting uncovered at the site, possibly for months, as a tarp wasn’t placed over them until this week.

And at both a press conference and Community Education Council District 24’s monthly meeting on Tuesday, Holden said the person who spoke about the high lead levels — a senior DDC project manager based in the immediate area — was contradicted by his colleagues over how dangerous the soil was and if it was covered.

The lawmaker added he visited the site last Friday and noticed the massive mound of soil was uncovered. But on Monday, he claimed, DDC Acting Commissioner Ana Barrio falsely told him it had been covered the entire time and that the agency project manager “misspoke” regarding lead levels.

“If anyone would know what’s going on with the site, he would,” he added of the project manager at the CEC meeting. “But now you’re telling me he misspoke?”

When contacted by the Chronicle, a DDC spokesperson said City Hall would be handling press inquiries on the matter. A spokeswoman for the Mayor’s Office later told the Chronicle that the dirt was not a threat to anyone in the area.

“This soil has been tested and does not pose a hazard to students, school staff or community residents,” she said. “We are safely removing the soil within the next week out of an abundance of caution.”

The spokeswoman did not respond to another inquiry with follow-up questions by press time on Wednesday, and Holden said a day earlier that lead levels in the dirt were lower than originally thought.

However, the lawmaker said he’s still incredibly concerned, citing CAC’s initial attempt to have the soil deposited at a dump, only for the dump to deny it.

A spokesman for CAC, Michael Capasso, told the Chronicle in a Wednesday email that the dump “visually rejected the material,” but added that the company’s tests of the soil — and more recent ones of the air around the mounds — showed it was not hazardous.

One day after learning of the problem, Holden said he had a 30-minute phone conversation with Mayor de Blasio on Saturday to inform him of the issue — adding that the city’s chief executive pledged swift action.

“He put his staff on it. The Mayor’s Office has promised a full investigation and I will hold him to it,” he said. “You’ve heard me criticize the mayor in the past, but not this time.”

Steps the city has taken to address the problem have been to “fast track” the testing of air and water inside PS/IS 128 and its annex — Holden said he wanted each child’s blood tested for lead, if their parents permit — and to end the practice of dumping excavated earth on the adjacent CAC site.

But what really needs to happen, according to the lawmaker, is an investigation into how the DDC allowed CAC to place the soil across the street from the school in the first place — something he said de Blasio promised.

“DDC told me, in fact, that they don’t locate waste transfer sites across from schools, so I want to know how this was approved,” Holden said. “I need answers.”

District Superintendant Madeline Chan said she had a lengthy conversation with the councilman and DOE officials the night before, adding that “everyone” in the agency is on the case.

“I’m not going to say no to any kind of testing,” Chan told parents, noting initial analyses showed no hazardous materials in the air at PS/IS 128 and its annex. “Whatever is needed, let me know.”

CEC 24 Co-president Dmytro Fedkowskyj added that all PS/IS 128 parents were contacted via robocall Tuesday about the issue and that people should be concerned, but not panicking.

“At this moment, there is no dangerous environment,” Fedkowskyj said. “We’re going to get to the bottom of it.”

In his statement to the Chronicle, Capasso said the fear over lead is unwarranted, as similar compounds are being dug up at PS/IS 128, where an extension to the school is being built.

“The material being excavated from that site contains [semi-volatile organic compounds], metals, and lead,” he said. “Councilman Holden made statements yesterday about the material staged by CAC, approximately 350 feet from the school, as being harmful. Yet there is an ongoing project next to the school with the same and or similar material.”