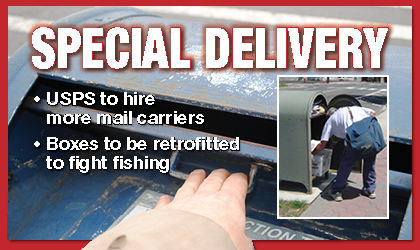 As Queens residents continue to complain of delayed or missing mail, the United States Postal Service announced it will hire more carriers and retrofit 3,000 boxes in Queens and Brooklyn in an effort to prevent mail fishing. 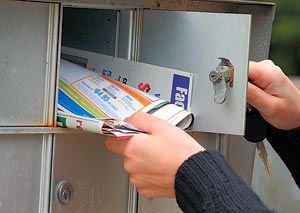 Members of Congress said while they’re happy the United States Postal Service has committed to hiring more mail carriers, more must be done to address delivery issues in Queens. It’s not clear how many more employees will be brought on.

As Queens residents continue to complain of delayed or missing mail, the United States Postal Service announced it will hire more carriers and retrofit 3,000 boxes in Queens and Brooklyn in an effort to prevent mail fishing.

Members of Congress said while they’re happy the United States Postal Service has committed to hiring more mail carriers, more must be done to address delivery issues in Queens. It’s not clear how many more employees will be brought on.

The United States Postal Service will hire additional mail carriers in an effort to resolve the delivery problems that have plagued Queens in recent months, borough Congress members announced Feb. 14.

Neither the politicians nor the USPS said how many more people will be employed or when the hiring will start. The announcement was made at a recent meeting between two lawmakers, representatives for three others and postal officials.

“This meeting was a productive first step, though it falls far short of a full and adequate resolution of the postal service crisis in Queens and Brooklyn,” Rep. Gregory Meeks (D-Queens, Nassau) said.

Meeks said the additional carriers will be hired to “resolve delays and discrepancies in mail delivery.”

The USPS will also look to bring on an unspecified number of people to field complaints made over the phone, “to ensure every postal matter is handled in a timely manner.”

Residents across Queens in recent months have complained of going days without receiving mail, getting parcels late at night and getting letters and packages meant for their neighbors on multiple occasions.

They said the delays and missing deliveries extend to late last year, before the Jan. 4 “bomb cyclone,” that the USPS blamed for many of the problems.

Elected officials have also said their offices have experienced issues with delayed or missing mail.

Rep. Grace Meng (D-Flushing), who joined Meeks at the recent meeting, said, “Complaints about the Postal Service have reached an all-time high.

“Problems are a regular occurrence and continue to grow.”

The carriers, she said, will not deliver boxes on some occasions by claiming nobody was home — even though someone was inside.

Other packages have been deemed “undeliverable,” including an eight pound box.

“My mother is 76 and she can carry it,” Vivienne said. “We’re not talking 50 pounds here. Come on now, it’s just ridiculous.”

Asked if she believes additional postal carriers may resolve the issues, Vivienne responded, “It’s not how many carriers there are, it’s the idea they’re refusing to do their own damn job.”

Ozone Park resident Paul Schroer was also skeptical, saying he doesn’t believe more people will stop him from getting his neighbor’s mail on a daily basis.

“And when I went to the post office to complain, I got yelled at,” Schroer said. “It’s the rudeness, it’s the abuse of power.”

Schroer isn’t the only person to have experienced pushback at the post office — an Ozone Park resident who went to complain last month was allegedly told carriers were “too busy” to deliver mail.

Rep. Hakeem Jeffries (D-Brooklyn, Queens), who represents Howard Beach and sections of Ozone Park, said in a written statement, “Mail service in America is a right. Every single one of my constituents deserves to receive mail regularly at their home, without delay.” Jeffries did not attend the recent meeting, but sent a representative there.

Some residents have said prescriptions or financial documents have been lost in recent months.

Meeks has said he’d support a House probe into the matter and last month signed on to a letter saying “mail delivery standards throughout Queens are not meeting even the most basic expectations.”

Rep. Carolyn Maloney (D-Manhattan, Queens, Brooklyn), a member of the House Oversight and Government Reform Committee, said she’d support a probe into the matter. Maloney sent an aide to the meeting with the USPS, but said in a statement, “Consumers and businesses deserve reliable delivery service, and I will continue to work with USPS to help resolve these problems in Western Queens and North Brooklyn.”

Her staff also brought up the issue of the Dutch Kills section of Long Island City needing its own full-service post office.

“Over the last decade, Western Queens and North Brooklyn have grown enormously, and the increased density has negatively impacted mail delivery service,” her office said.

A representative for Rep. Nydia Velazquez (D-Brooklyn, Manhattan, Queens) also attended the meeting, but the congresswoman did not issue a statement.

At a recent meeting of the Woodhaven Residents’ Block Association, Evelyn Cruz, from Velazquez’s office, said she’s received calls from residents in all parts of the district about delivery problems.

A spokesman for the USPS said in an emailed statement “We share concerns of reliable, effective and secure mail delivery service ... Our goals are to provide postal customers, their constituents, the excellent postal services that they deserve and to ensure that improvements are made where we aren’t living up to expectations. Postal officials look forward to maintaining and expanding robust lines of communication to address any concerns as they relate to the Post Office.”

I do not believe that Postal spokesperson in the last paragraph. I sent a letter to the "Postmaster" in my zipcode over 2 months ago complaining about me receiving someone else's mail. I never got any feedback or acknowledgement.