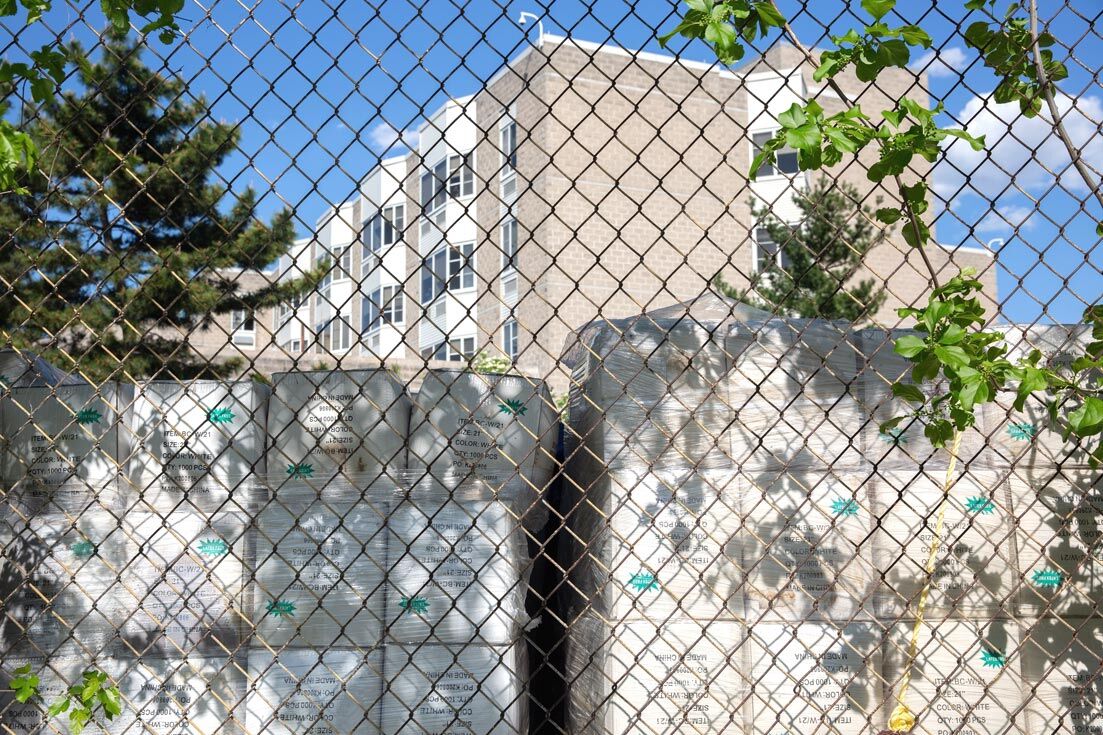 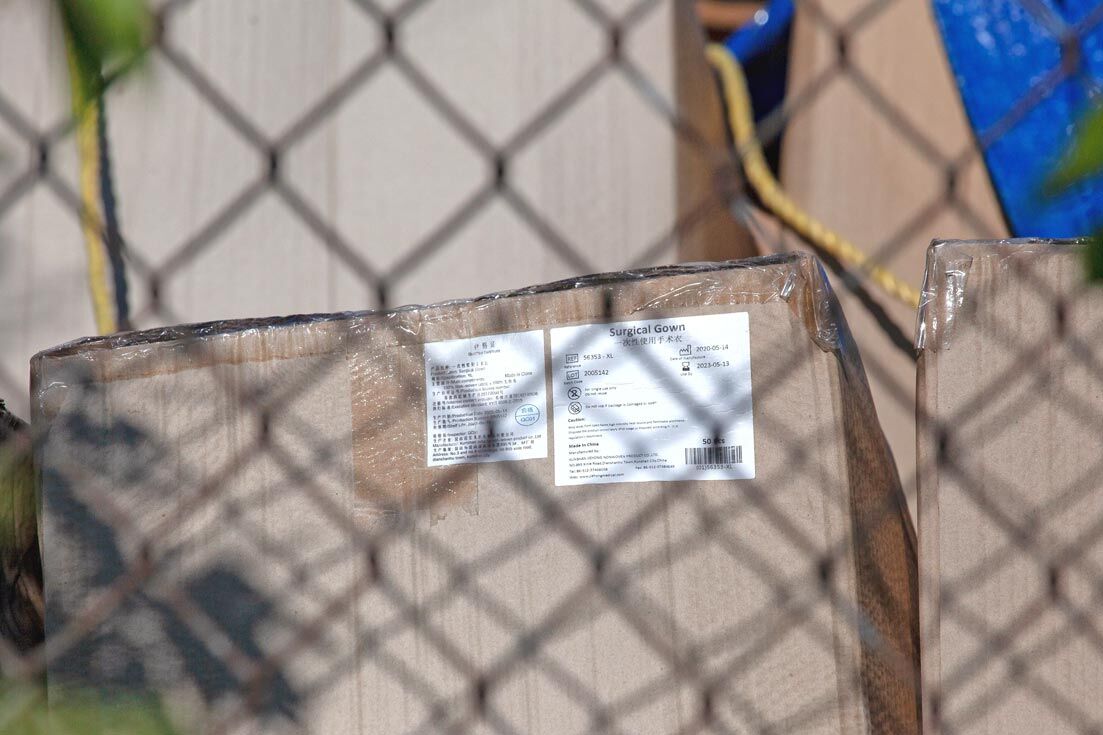 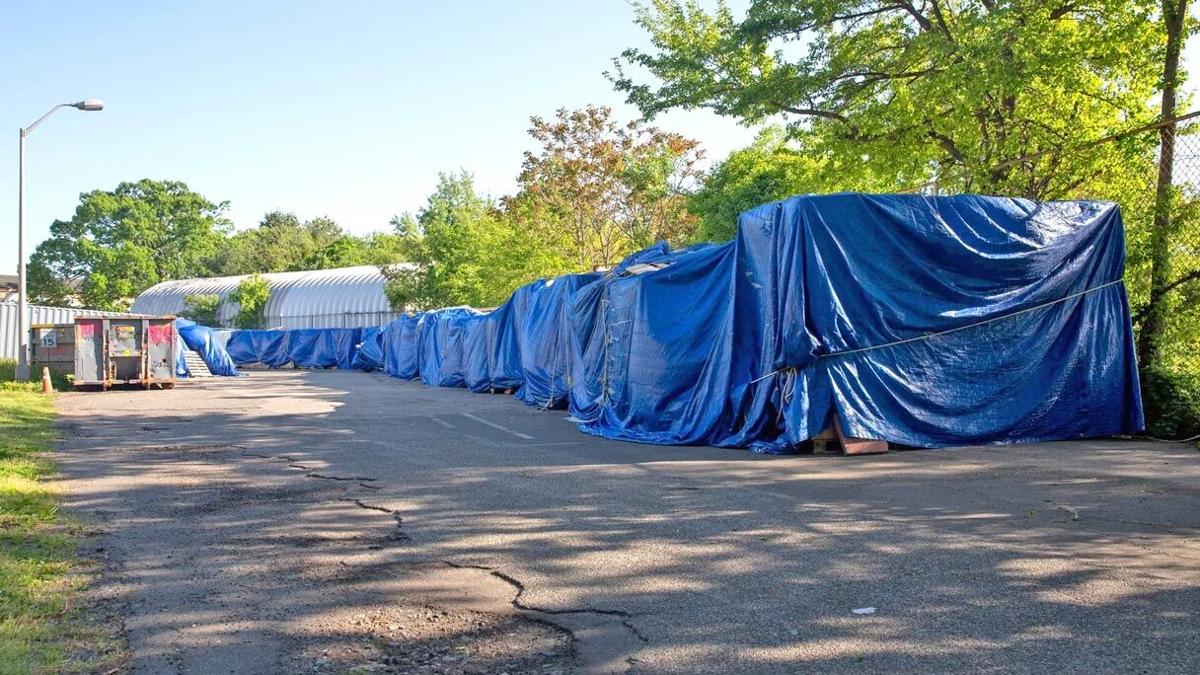 This article was originally published on June 28 at 9:42 p.m. EDT by THE CITY

A state-run Queens nursing home for veterans has been storing nearly 1,000 boxes of PPE outside under a blue tarp for months — exposing the once desperately needed items to rain, rats and snakes, THE CITY has learned.

Much of the supply cache, which includes medical gowns, has been rendered unusable from rot and mildew, staff say.

Hundreds more boxes of PPE are stacked floor to ceiling in a number of rooms at the New York State Veterans’ Home at St. Albans that are intended for resident use — including a multi-purpose room, library and physical therapy unit, staffers told THE CITY.

Over a year ago, supply shortages at the height of the coronavirus epidemic were so acute that three nurses in a Manhattan hospital were forced to don garbage bags in lieu of medical gowns to protect themselves.

Staffers at the St. Albans veterans facility recall experiencing similar desperation at the time, when nursing homes were particularly hard-hit by the virus.

“When we needed the PPE we couldn’t even get it,” said one employee. “Now it’s being wasted.”

Multiple staffers who spoke to THE CITY said they can’t fathom why facility leaders haven’t stopped the influx of protective gear, which one employee said includes surgical masks and gloves.

Some lamented that it hadn’t been taken somewhere where shortages persist — such as India, where the Covid-19 crisis has sparked a flood of international relief efforts, including PPE deliveries.

Recently at St. Albans, a number of rental trucks have arrived to pick up some of the boxes of PPE, according to two staffers — but only after nearly 1,000 boxes had been exposed to the elements for months.

Officials at the State Department of Health, which manages the veterans facility, said the trucks were moving some of the boxes into storage, both on-site and off.

But they didn’t respond to a question about the visible damage to hundreds of boxes stored outside, nor whether it was appropriate to store the PPE outdoors for months at a time.

Instead, Jill Montag, a health department spokesperson, sent a statement that read in part that St. Albans, like other nursing sites, “continues to receive, manage and use a supply of PPE items in an ongoing effort to combat the pandemic, stay prepared for any future developments and abide by state and federal regulations governing PPE supply requirements.”

The longtime administrator of the veterans home, Neville Goldson, didn’t respond to multiple questions sent via email about the PPE.

A vast portion of the stack of boxes under the tarp recently tumbled onto a private roadway beside the nursing home, damaging the cargo and inviting rats, raccoons and snakes from a nearby vegetable garden to settle in, two employees said.

“What are they doing with this PPE?” one of the workers asked. “We’re overflowing with PPE. It’s like madness.”

New York’s nursing homes have been particularly hard hit by the coronavirus pandemic.

More than 15,000 residents and staff of nursing homes and other long-term care facilities have died from Covid-19, according to the state Department of Health.

The agency only acknowledged the true death toll after a report by State Attorney General Letitia James in January found that state officials had been publicly underreporting the data by as much as 50 percent.

Gov. Cuomo’s administration is being probed by the Federal Bureau of Investigation over its handling of nursing homes during the crisis, including for the accuracy of information New York supplied to the U.S. Department of Justice last year.

State provisions that formerly required nursing homes to accept Covid-positive patients directly from hospitals, and that protected the healthcare industry from lawsuits, have also drawn scrutiny and criticism.

Even amid the crisis, however, the veterans home at St. Albans has stood out.

As THE CITY has previously reported, staffers sounded the alarm in May 2020 that the state-run facility wasn’t properly isolating residents with presumed or even confirmed Covid, and kept them in shared rooms with a roommate not known to be ill.

The facility also failed to assign dedicated staffers to treat the residents known or presumed to have coronavirus — even though the state Department of Health required such separation in facilities with confirmed Covid cases to limit the potential spread of virus by staff.

Just before Memorial Day last year, staffers provided THE CITY with a list of the residents who had died of Covid-19, in an act of defiance intended to call attention to the state’s undercounting of deaths of veterans at the home.

The list identified 48 residents who died, at a time when state officials were acknowledging at most 35 coronavirus-related deaths.

Earlier this year, THE CITY reported that a number of family members responsible for relatives’ medical decision-making in the nursing home had not been informed by officials at the facility that their loved ones had been given hydroxychloroquine, an antimalarial used as an experimental Covid-19 treatment.

At least 62 residents were administered the drug between March and late April 2020, documents and sources revealed.

Neither state Sen. Leroy Comrie (D-St. Albans) nor Assemblymember Alicia Hyndman (D-Springfield Gardens), whose districts include the nursing home, responded to requests for comment from THE CITY.

But Assemblymember Ron Kim (D-Flushing), who has been a vocal critic of Cuomo’s response to the nursing home crisis, said the photos of the PPE outside the St. Albans facility confirm the need for state officials to re-examine the protocols for how protective gear is stored and distributed.

Kim, chair of the Assembly’s aging committee, said he plans to introduce legislation that would allow state lawmakers to make unannounced visits at nursing homes and other long-term care facilities, in order to check for negligent behavior or violations of PPE protocol.

“This is clear evidence that we need another oversight hearing as soon as possible to continue our analysis and investigation of what is going on in state-run nursing home facilities,” he said.

“THE CITY (www.thecity.nyc) is an independent, nonprofit news organization dedicated to hard-hitting reporting that serves the people of New York.”

It is absolutely unconscionable that a situation like this can exist for so long. Why are there no agencies or persons responsible for oversight. If no one else, the director of this VA facility should be held responsible for the waste incurred by not seeing that some of this PPE was delivered to other homes and/or hospitals in dire need. Just one more incident of elected officials not caring about how taxpayer money is wasted.