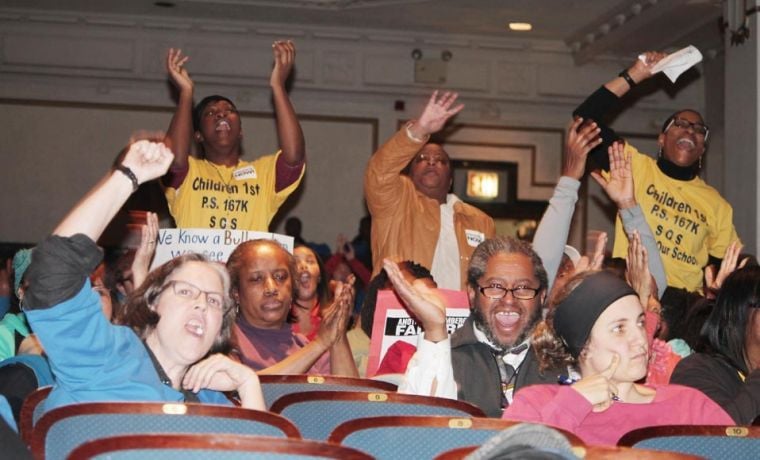 Teachers, parents and other opponents of the Department of Education’s phaseout and collocation policy chant during the Panel for Educational Policy’s meeting in Brooklyn on Monday. 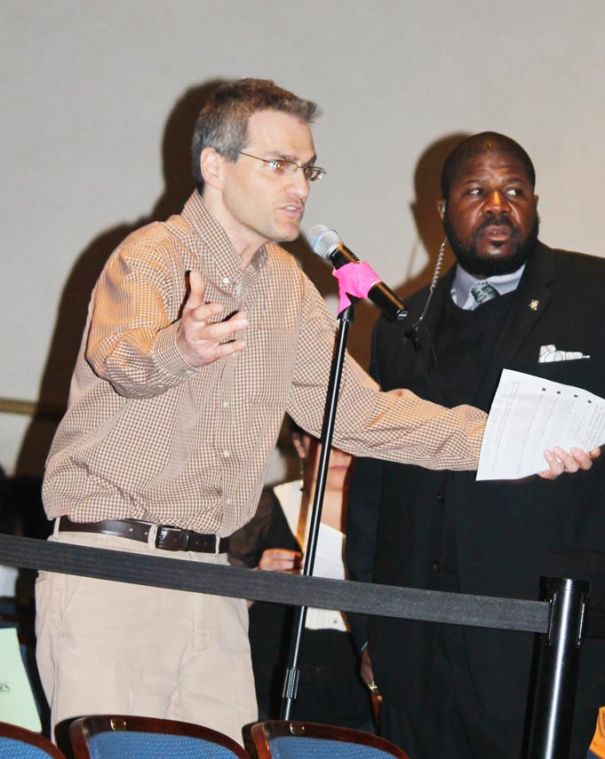 James Eterno, UFT chapter leader at Jamaica High School, was one of the speakers from Queens at Monday’s PEP meeting.

Teachers, parents and other opponents of the Department of Education’s phaseout and collocation policy chant during the Panel for Educational Policy’s meeting in Brooklyn on Monday.

James Eterno, UFT chapter leader at Jamaica High School, was one of the speakers from Queens at Monday’s PEP meeting.

The police officers and bodies in suits standing guard at the end of the auditorium aisles have become a familiar staple of late winter and early spring meetings of the Panel for Educational Policy in recent years.

The policy-making arm of the city Department of Education decided the fates of dozens of city schools, including two high schools in Queens — Business, Computer Applications and Entrepreneurship; and Law, Government and Community Service — and voted on a slew of other new collocated schools, including new ones that will be placed in Flushing and Newtown high schools at a meeting Monday night at Brooklyn Technical High School.

By a vote of 8-4, the PEP approved all of the changes. Seven of the votes came from mayoral appointees — the eighth member was absent — and one vote came from Staten Island representative Diane Peruggia.

The two closing schools — both located at Campus Magnet Complex in Cambria Heights — will be phased out starting next year. A new high school focusing on English language learners will open in Newtown High School’s building and two new high schools, including one dedicated to Chinese-speaking students, will open in Flushing High School’s building next year, which will allow the DOE to decrease enrollment at Newtown and Flushing. The DOE had attempted to phase out both schools last year, but a lawsuit prevented it from moving forward with the plan.

The four schools were the only ones in the borough out of more than 50 citywide whose futures were decided Monday night. Most of the phaseouts and collocations were in Brooklyn and the Bronx.

The six-and-a-half-hour meeting was calmer than many in past years, but did have a number of vociferous moments. Parents, teachers and union officials were not coy about their frustrations and disapproval of the body’s decisions, not only those made Monday, but Mayor Bloomberg’s entire education policy.

“You’ve had 12 years to fix our schools and you’ve failed!” scolded Michael Mendel, the United Federation of Teachers’ secretary.

The real anger toward the board was less about its decision to close or collocate dozens of schools citywide this year specifically. Most were already resigned to that happening. At issue was the frustration with the Bloomberg administration’s policies on schools period, especially in his third term.

“You don’t listen to us!” screamed one teacher repeatedly as Schools Chancellor Dennis Walcott and Deputy Chancellor Marc Sternberg explained the DOE’s phaseout and collocation policies.

Walcott said the department had done everything it could for the problem schools and that new collocated schools provide another option for students at failing institutions. He acknowledged there is strong opposition to the DOE’s idea, but defended it.

“We know we can’t please all the people all of the time and that leads to the reaction we see in the audience tonight,” the chancellor said.

Sternberg struggled to speak over the boos and hisses and chants of “Liar!” and “Fraud!” from the crowd when he outlined steps the city took toward saving failing schools. At times seemingly affected personally by the catcalls from the crowd, Sternberg said closing schools is a “last resort” and he wasn’t happy to be doing it.

“There is no joy for me or my colleagues in having to bring these proposals to you this evening,” he said. “But we have a responsibility to act.”

James Eterno, UFT chapter leader at Jamaica High School — which was approved for phaseout in 2011 — said the city did nothing to help Jamaica in the years before the DOE decided to close it and has done nothing for the school since. He also questioned the policy of collocations and phaseouts, noting the situation at the Campus Magnet — formerly Andrew Jackson High School — which was closed in the 1990s and replaced with four schools.

“If phaseouts were such a success, why are we here discussing closing two of the four schools located there?” he asked.

The PEP also debated a resolution drafted by Queens member Dmytro Fedkowskyj that would place a moratorium on school closures and collocations, but discussions about the proposal turned to criticism of mayoral control, which allows the mayor to appoint a majority of the members of the PEP.

“In 10 years, no one’s raised a hand against the mayor, because you know you’ll get fired if you do,” Patrick Sullivan, Manhattan representative on the PEP, said to the members appointed by the mayor. He accused them of not being involved in policy discussion, amidst chants of “Puppets!” from members of the audience.

“Did it ever occur to you that we’re here because we believe in what’s being done?” responded Judy Bergtraum, one of Bloomberg’s appointees.

Fedkowskyj responded by suggesting the DOE should have gotten involved in the troubled schools earlier.

“If these policies were put in place before phaseout, we wouldn’t have to phase these schools out,” he said to thunderous applause from the audience.

The resolution was supported by a number of mayoral candidates, but only former Comptroller Bill Thompson was at the meeting to speak in favor of it. However, one teacher yelling across the room at Thompson called for the mayoral candidate to support ending mayoral control.

“No to mayoral control, for you too Thompson!” she screamed, letting him know that she did not support having him in control of schools as mayor, even if he was opposed to Bloomberg’s policies.

The board voted down Fedkowskyj’s proposal by a tally of 8-3-1, with the lone abstention coming from Brooklyn’s representative, Kelvin Diamond. A contingent of teachers from Brooklyn booed Diamond’s vote, accusing him and Brooklyn Borough President Marty Markowitz, who appointed him, of being sellouts.

The PEP will meet again next Wednesday night, March 20, in the same location to vote on another list of closures and collocations, including collocations of new schools in August Martin High School; PS 156 in Laurelton, which is also proposed to be truncated from a K-8 to a K-5; IS 8 in South Jamaica, IS 204 in Long Island City and JHS 226 in South Ozone Park.