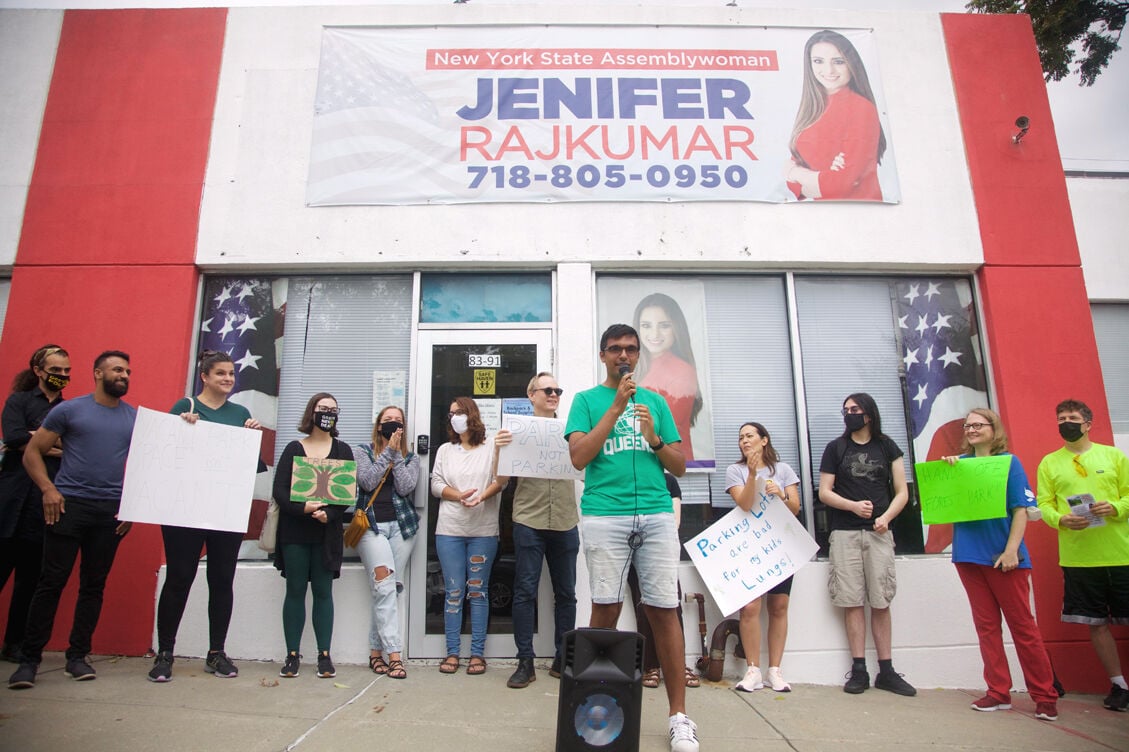 Rajkumar identified a lot with benches on co-op land as a potential site where she would add parking spaces.

Rajkumar identified a lot with benches on co-op land as a potential site where she would add parking spaces.

A proposal to add parking spaces to a stretch of Woodhaven bordering Forest Park released by Assemblywoman Jenifer Rajkumar (D-Woodhaven) has sparked confusion and protests from a group of ecologically minded residents in her district.

In a press release from two weeks ago, Rajkumar publicized a walk-through with Department of Transportation Commissioner Nicole Garcia, in which she said she was proud to provide plans to convert “vacant park space at the corner of 98th Street and Park Lane South” into parking, among other ideas for increasing the number of spots as locations for diagonal parking next to the Forest Park Co-op and finding other spots along the roadway.

In response, advocates and residents of her district raised concerns that Rajkumar’s plan at the intersection, which contains two wooded areas — one a section of Forest Park — and two private driveways on the other side, aimed at building a parking lot on the park land.

On Sept. 2, Rajkumar’s spokesperson Vjola Isufaj tweeted that the assemblywoman never proposed cutting down trees or adding parking in Forest Park, and said that the “park space” was located on a gravel lot owned by the Forest Park Co-op, but did not provide the exact location when the Chronicle reached out multiple times last Friday about where Rajkumar proposed to put the new parking lot.

Rajkumar later told the Chronicle over the phone that the space she was referring to is next to Section 2 of the Forest Park Co-op on 98th Street — over 100 yards from the intersection mentioned in her original press release.

But such clarification was not made by Sunday when South Richmond Hill resident Aaron Narraph Fernando, who lives just outside Rajkumar’s district, had organized a protest that brought out around 20 advocates and Woodhaven residents who gathered at Rajkumar’s office to protest not just against any plan that involved park space specifically, but more broadly, the addition of parking spaces to the area as encouraging greenhouse gas emissions through car infrastructure.

In advance of the protest, Rajkumar’s office sent out a statement that accused the activists of making up facts, painted them as politically motivated Democratic Socialist of America members and claimed that the parking lot idea was being proposed on “a vacant plot of gravel at 98th and Park Lane South that is privately owned by a co-op building” as opposed to the wording she used a week earlier: on “park space.”

Around that time, according to an email Rajkumar sent the Chronicle on Wednesday, her office also sent an email to the DOT which included a final list of requests based on her walk-through that included redesigning median striping on Woodhaven Boulevard, creating angled parking along 98th Street next to the co-ops and slimming down the bus lane on Woodhaven to make room for additional spots. The email, sent after Rajkumar’s “park space” plan had garnered criticism on social media, denied the assemblywoman had ever proposed building parking in Forest Park.

“While some residents proposed different ideas such as building on the edge of Forest Park, the assemblywoman never at any time supported such a plan,” the email read. “Separately our office is reaching out to the leadership of the Forest Park Co-operatives to see if they would be willing to convert their vacant gravel lot at 98th Street and Park Lane South into parking.”

Asked if she should have provided the exact location of the proposed parking lot in her first press release and avoided the controversy, Rajkumar said no, “all of the releases and plans that I have sent out were perfectly correct.”

The protest on Sunday centered around a half dozen Woodhaven residents who took turns speaking about environmental and safety concerns they said Rajkumar’s parking announcement had raised. The protesters acknowledged the fact that Rajkumar had denied she was planning to chop down trees, but argued that they were still concerned since at that point she had not clarified the exact site that she was proposing.

“She hasn’t said where she expects to put this parking. So we’re here today to make our vision clear that we are against this new parking and we are against cutting down any of these trees,” said Fernando.

Among the protesters the consensus was that car infrastructure promotes the burning of fossil fuels and should be shelved for mass transportation and green space.

“What makes this neighborhood a joy to live in is Forest Park and what makes it a struggle and scary sometimes are the cars,” said Woodhaven resident Scarlett Ahmed, who spoke about the dangers of her children crossing Crossbay Boulevard.

Other residents raised concerns spurred by Hurricane Ida, pointing out that more pavement could create more runoff that could potentially lead to flooding.

“I am a homeowner who was affected in the aftermath of Tropical Storm Ida,” said Kat Bridges, another Woodhaven resident. “​​Our community is at such high risk of stormwater, sewage system overflowing every time there’s a moderate rain, let alone what we experienced this past week.”

In addition to Rajkumar’s constituents, the protest drew a number of green transportation advocates.

“When she ran for office, she spoke of wanting to improve mass transit and transportation. Wonderful, beautiful. Let’s do that. There’s so many different ways we can do that,” said Peter Beadle, a Transportation Alternatives volunteer.

Rajkumar has said that her plan came in reaction to multiple complaints about the dearth of parking from residents of the Forest Park Co-op, a housing development with thousands of residents that sits just north of the intersection at issue and right next to Rajkumar’s district office.

“Her plan to create angled parking on 98th Street and open up spots on the Woodhaven Boulevard Service Road are common sense solutions that many of us support,” said Kenneth Mankowitz, president of Forest Park Co-op Section 1, who has been raising the issue in public forums since at least March.

Beyond those at the protest, other members of the Woodhaven civic community said that they were let down about not being approached before Rajkumar’s meeting with the DOT.

“Honestly I was a little disappointed that Community Board 9 wasn’t invited or had any input, and I was almost getting that same general feeling from some of the other community groups,” said CB 9 Chairman Kenichi Wilson.

This article originally misstated the status of Aaron Narraph Fernando vis-a-vis Assemblywoman Jenifer Rajkumar. He lives outside of her district. We regret the error.

Protestor's Sign reads " Parking lots are bad for the lungs". But so is air travel, space rockets, buses, coal burning. If you focus on that you will get more bang for the buck. Be smart and not be a professional protestor.