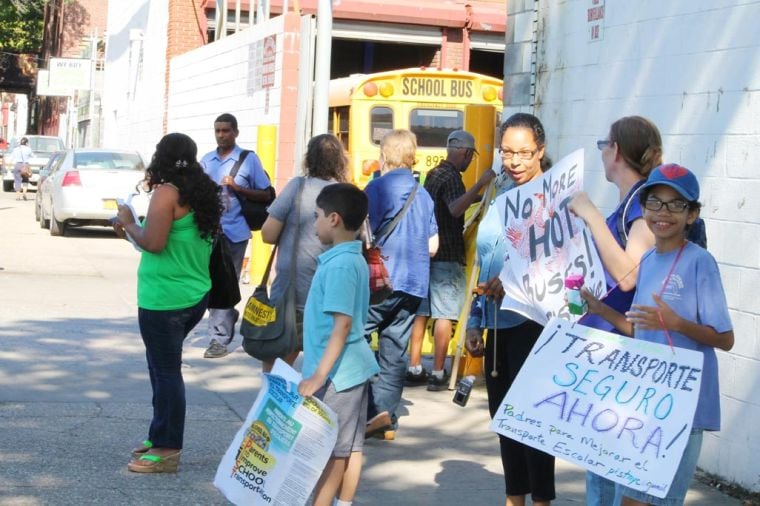 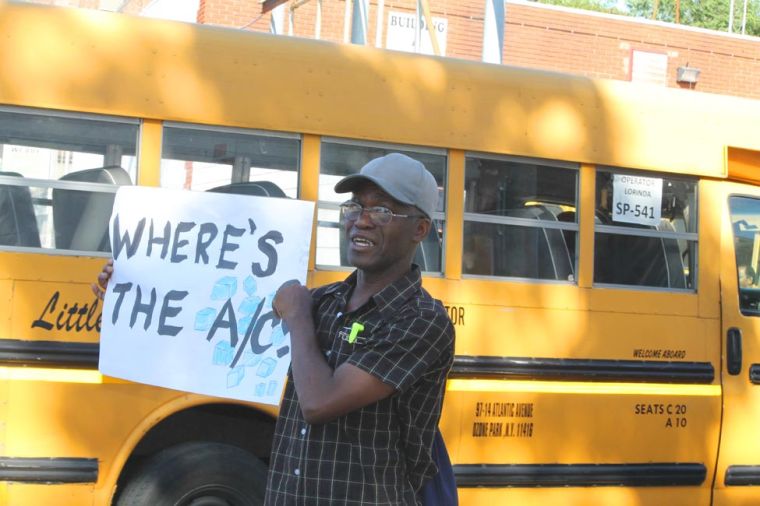 Belinda Barnett-Andrea has a lot on her mind.

The St. Albans resident is still dealing with the long recovery of her brother, transit cop John Barnett, who was stabbed in the eye by an emotionally disturbed man in Jamaica last summer.

Her son Frankie is in a year-round District 75 program in Bayside and his commute there on a daily basis is hard enough. But during last month’s heat wave, Frankie began coming home sick on a hot school bus, adding another concern to Barnett-Andrea’s list of issues.

New York City law requires school buses that serve special education students have the air conditioning turned on when the temperature is over 70 degrees, as it has been nearly every afternoon since June.

But members of the group Parents to Improve Student Transportation said many school buses that run District 75 routes do not have air conditioning, often break down and are late.

The group staged a protest outside the Logan Bus Company yard at 97-12 Atlantic Ave. in Ozone Park on Monday afternoon as buses lined up to get back into the yard at the end of the day.

Sara Catalinotto, president of PIST, delivered a letter to the main office of Logan listing some of the issues citywide concerning special education students and buses this summer, including two in Queens.

“We want them to see for themselves what the problems are and take care of them,” she said. “If they don’t, the city really needs to step in.”

On one bus, route Q320, PIST said there has been chronic lateness as well as no air conditioning with the windows up and the bus driver’s window open.

The letter said that at least one child came home soaked in sweat and needed to be placed on an asthma machine and the matron and driver have not followed regulations including boarding children on the traffic side of the bus across the street from the home instead of door-to-door transportation.

PIST also received complaints about the driver blowing the horn, a sign in the window with the wrong operator’s name, failure to pre-trip buses before leaving the yard and inspectors who close cases without first following up with parents and caregivers.

The letter includes complaints from Frankie’s bus, Q337, which alleges that the bus had insufficient air conditioning, and was filed on July 16 — at the height of the seven-day heat wave. The letter states that an inspector was not sent out until July 19. Office of Pupil Transportation borough representative Frank Jackson told a complaining parent that the bus for that route now has air conditioning, but the parent said it was still too hot for both the children and their aides.

Barnett-Andrea said a violation was issued for his son’s bus after inspectors responded, but she said the problems come right back after the case is closed.

One driver, who wished to have his name withheld, acknowledged the problem.

“Today was the first time I was on a bus with air conditioning,” the driver said.

Department of Education spokeswoman Marge Feinberg said the two buses with issues in Queens were checked and the situation has been rectified.

“We have arranged for inspectors to check them in the morning,” she said in an email. “Buses Q320 and Q337 were inspected in late July and the air-conditioning systems were found to be in working order. When a report ofnon-functioning or inadequate air-conditioning system is received, the vehicle is scheduled to be seen by an inspector. If the system is not working properly, it is normally taken out of service and a replacement bus is ordered.”

But Barnett-Andrea said she believes the city just doesn’t care about her son and others in special education programs.

“I think they’re discriminating,” she said. “This is too important. Doctors don’t sign notes because they have nothing better to do.”