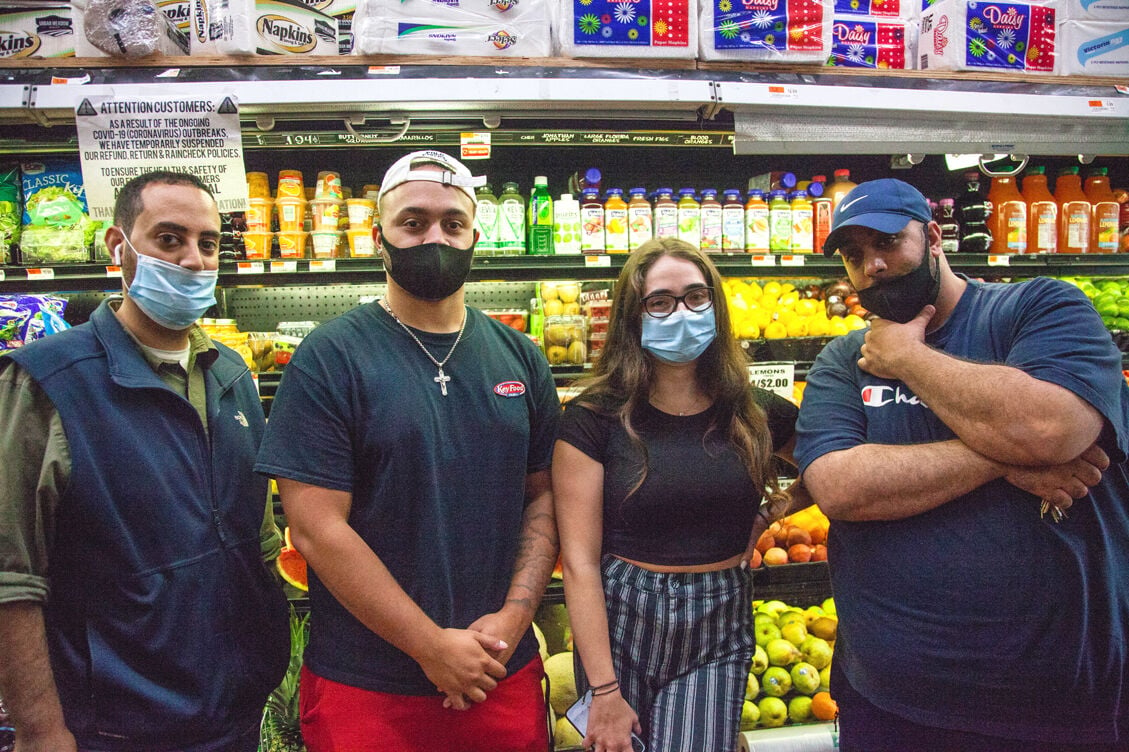 The staff of the Ozone Park store began taking their civic role more seriously during the coronavirus crisis. Above are Hasan Zghari, left, Chris Lopez, Sierra and Ahmad Zghari. 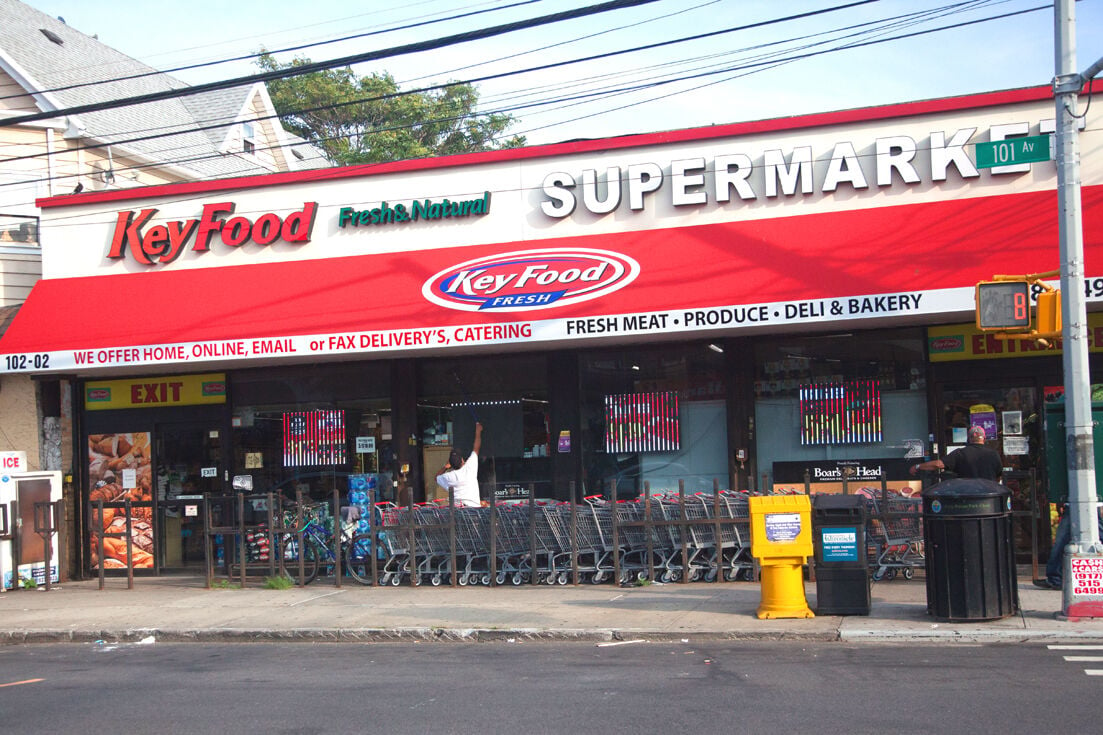 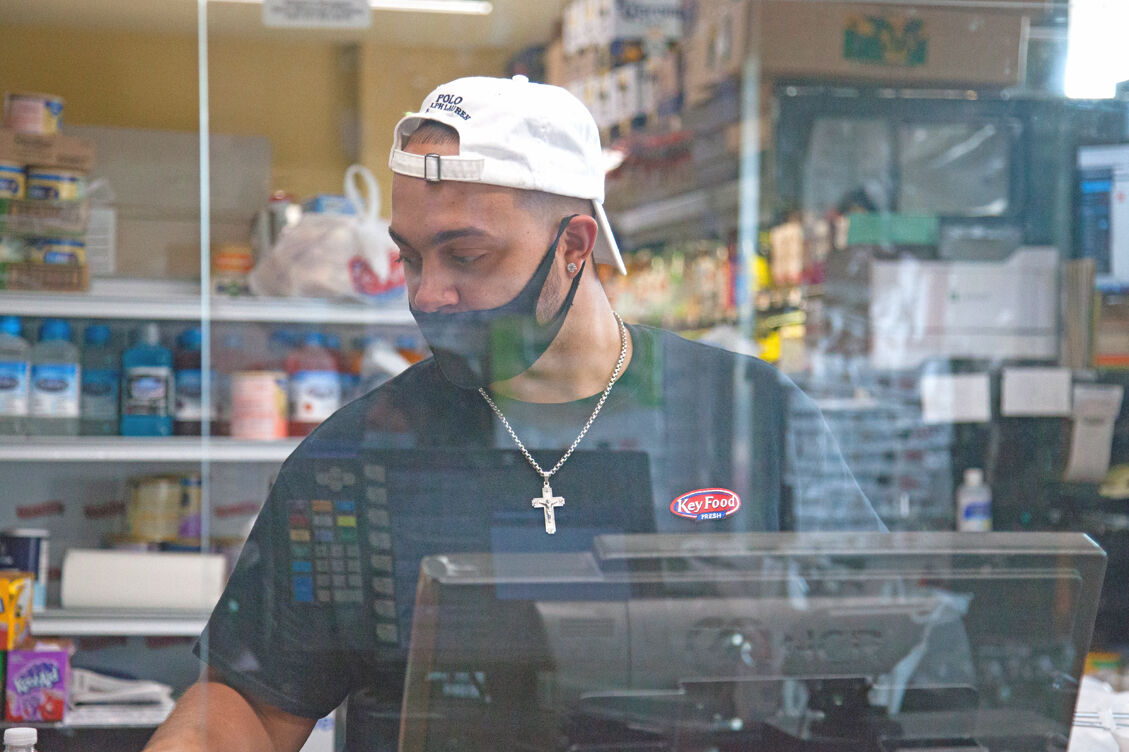 During the pandemic, long lines wrapped around the Ozone Park Key Food, where Lopez, left, works the cash register. 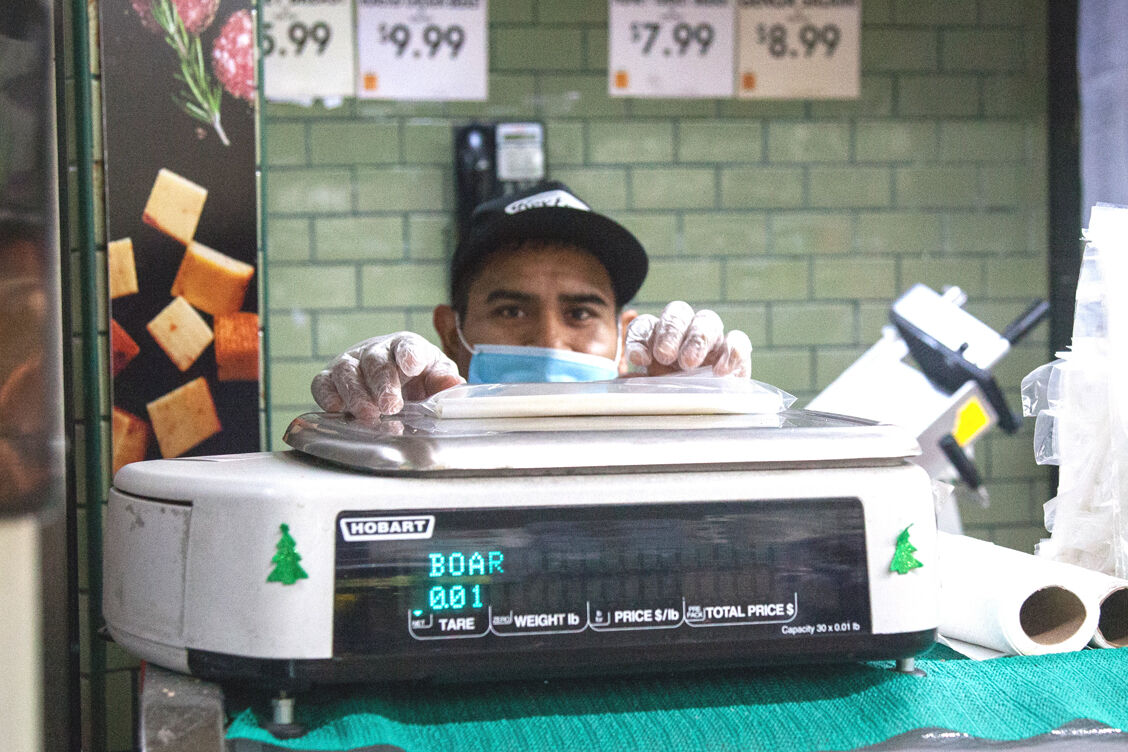 The staff of the Ozone Park store began taking their civic role more seriously during the coronavirus crisis. Above are Hasan Zghari, left, Chris Lopez, Sierra and Ahmad Zghari.

During the pandemic, long lines wrapped around the Ozone Park Key Food, where Lopez, left, works the cash register.

The first image that came to the mind of Hasan Zghari when asked about his experience of the pandemic was a snowstorm.

“It was an unpredictable blizzard. Usually when it comes, it’s snow and go, and it’s over with. With this one it’s all up in the air,” he said.

As general manager of the Key Food at 102-02 101 Ave. in Ozone Park, he found himself as the sole grocery provider in the neighborhood for several weeks when the pandemic hit hardest.

To cope with the surge in demand, he not only had to ensure that his staff and customers were as safe as possible, but shift his whole business model to meet demand and encourage phone orders.

Zghari, an Ozone Park resident, is general manager of several Key Foods stores around New York City, including one in Maspeth next to NYC Health + Hospitals Elmhurst, which emerged as one of the most overburdened hospitals in the city.

In talking wth the Chronicle about the effects of COVID Hasan and his brother Ahmad Zghari, the manager of the Ozone Park Key Food, spoke with a special fondness for that store, where they have gotten to know many of their customers on a personal basis.

Though none of his employees there became infected, he knew of customers who were. His role took on a civic significance. He said he needed to make sure his neighbors were taken care of.

Business doubled when the Ozone Park store was the only one in the area to stay open for a period of around three weeks. While the store had lines wrapping around the block, Zghari transformed the model of the store to focus on deliveries as much as possible.

“We didn’t want people to come to the store,” he said.

Protecting seniors citizens in the area became a priority. The store stopped charging Howard Beach and Ozone Park seniors any phone order fees to make sure that they had access to groceries.

Not only were the grocery store employees making deliveries, even to neighborhoods way out of their range like Ridgewood, they started cooking special meals for seniors who were asking for it.

“This woman called and said, ‘Could you do this for my dad?’ You’d take a chicken, cut it up into four pieces, and put it with some microwavable bag of rice and a can of beans,” said Ahmad.

At one point they called an Uber to do a delivery, even though the cost negated most of the return.

When suppliers weren’t able to provides the store with groceries, Ahmad took it into his own hands.

“We rented trucks, and went to wholesalers, and picked up stuff. We were doing it by ourselves,” Ahmad said.

One worker, Andrew Distefano, said that he was simply too busy to be thinking about health risks. When the pandemic hit, Distefano, 20, went from doing deliveries two days a week to five days back-to-back from 12 to 9 p.m.

“I wasn’t really worried about the risk. I was more stressed about the actual work because there was a lot. There was always a backlog,” Distefano said.

Distefano, who lives with his mom and brother, said that he had to quarantine himself from his family members when he got home.

The Zghari brothers, who live with their parents in their 60s, completely changed clothes before they went home, and isolated as much as possible inside.

Sierra, a 20-year-old employee who declined to give her last name, said that she had to be extremely cautious because her mother, whom she lives with, has health problems. But even though it caused anxiety, Sierra said that her mother was proud of her for wanting to help people.

Since her job mostly consisted of taking phone orders, she said that she found ways to help people who were struggling to make ends meet. She would work closely with customers, especially seniors, to help them find sales, and get the most bang for their buck.

“I was definitely happy to give back. I’m not a doctor or a lawyer. People were just so happy. You didn’t realize how much you need a supermarket. Food is important,” Sierra said.

In return, the staff said, the level of customer appreciation soared.

“We have longtime customers who not only say they appreciate us, but actually show it,” said Ahmad.

One customer actually brought the staff a bottle of liquor as a thank you. Tips also increased — a silver lining of the risks that the staff were taking.

Distefano even earned the name “Warren Buffet Jr.” for taking the money he saved from his tips and extra shifts and investing it through the Robinhood app. Distefano said that Zghari encouraged many of his employees to try investing for the first time, right before the market started to rebound.

As of July, Zghari said that the operations of the store had returned to something resembling normal, with the addition of the customer base who started shopping there at the peak of the virus. In another change, Zghari will continue to waive the fees of phone orders for seniors.

Though in many ways the Zghari brothers prioritized civic obligations ahead of profit at the pandemic’s worst, they never stopped being shrewd businessmen. Ahmad did not miss out on the opportunity to promote his store.