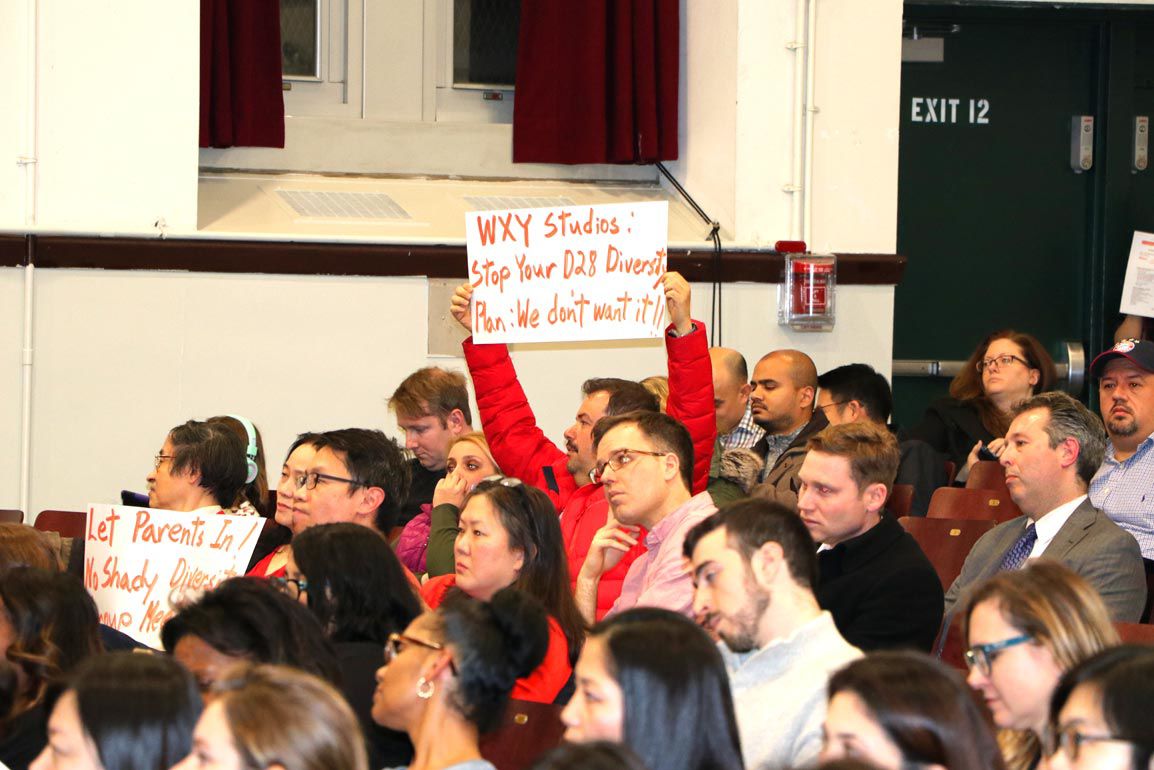 Parents opposing the Department of Education’s plan to diversify middle schools in School District 28 hold signs at a forum on the topic in Briarwood. The plan would affect schools in Forest Hills, Rego Park, Kew Gardens and Jamaica. 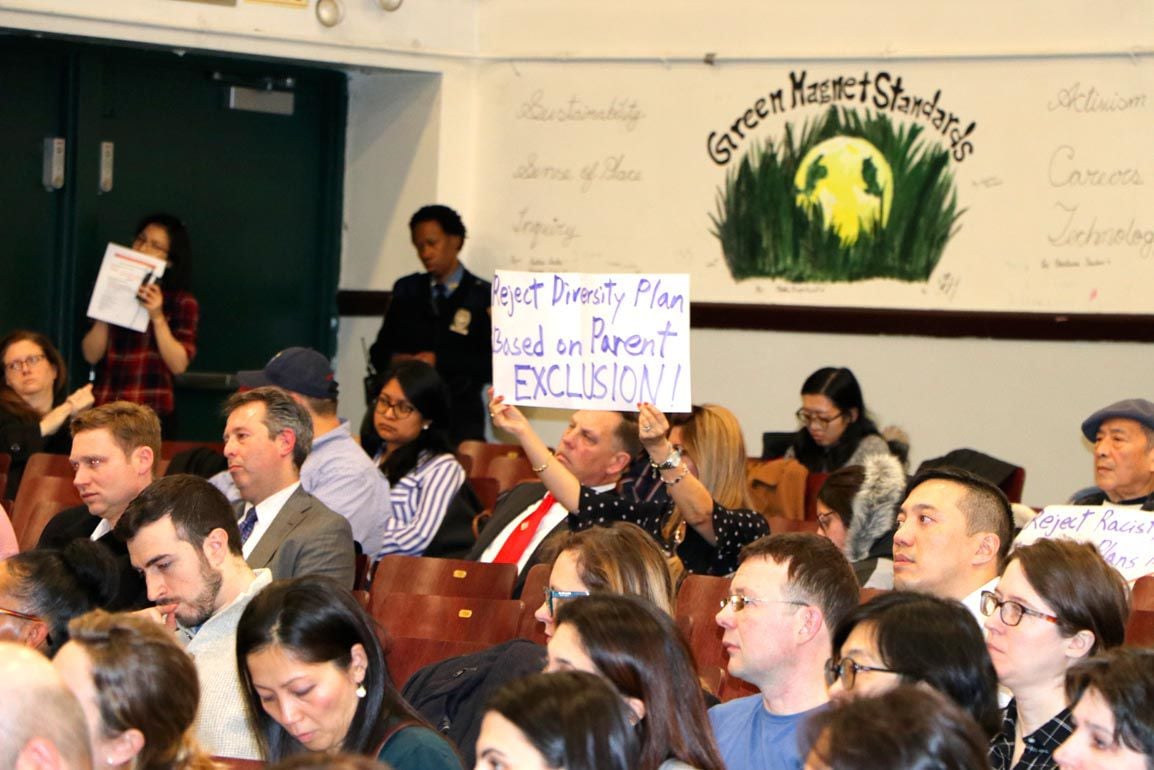 Another DOE critic objects to the way parents were kept out of a previous forum due to lack of space.

Parents opposing the Department of Education’s plan to diversify middle schools in School District 28 hold signs at a forum on the topic in Briarwood. The plan would affect schools in Forest Hills, Rego Park, Kew Gardens and Jamaica.

Another DOE critic objects to the way parents were kept out of a previous forum due to lack of space.

For more than two hours, parents in School District 28 yelled at the city Department of Education — and each other — over a proposal to diversify the district’s middle schools at a heated meeting of Community Education Council 28 on Jan. 2.

The meeting was billed as a forum for parents to ask questions of the DOE and its consulting firm, WXY Studios, on how it plans to desegregate the schools — but opponents of the plan mostly took their time to accuse both entities of secrecy, and some supporters accused the other side of racism.

“Unless proven otherwise, it’s our assumption that [Schools Chancellor Richard] Carranza and WXY is trying to ram through with this ... and we’re not going to give up until a true democratic process emerges,” parent Jason Fink said, to applause from a majority of the audience at JHS 217 in Briarwood.

In 2018, the city granted District 28 and others in other boroughs $200,000 each to draw up desegregation plans by the end of this school year. Schools in the northern part of the district — in mostly white neighborhoods like Forest Hills, Kew Gardens and Rego Park — typically perform well while the southern portion, which encompasses Jamaica, has lower-performing institutions.

School District 15 in Brooklyn — which stretches from Park Slope to Red Hook — eliminated middle school admission standards to integrate them, and later the city said the experiment was a success and that diversity at all the schools had increased.

District 28, according to DOE statistics, is 30 percent Asian, 28 percent Hispanic, 20 percent black and 16 percent white. But in JHS 190 Russell Sage in Forest Hills, 33 percent of students are Asian, 27 percent are white, 27 percent are Hispanic and only 7 percent are black. Its test scores are far above the state average every year. Meanwhile, black students make up close to 70 percent of middle schools in Jamaica, which have struggled on state tests.

Officials believe integration would not only increase diversity, but improve test scores throughout the district.

Those who support integration in District 28 accused detractors of having a racial bias for opposing any such plan. “The way you’re behaving today is absolutely disgraceful,” said parent Shavvone Jackson. “We’re teaching our children this racism that’s going on today.”

Most who spoke in opposition were white or Asian, though some black and brown parents also spoke out against any such plan. Lorraine Reid, who is black, said the DOE should focus on providing more resources to the struggling schools in Jamaica instead of trying to get black children into schools in Forest Hills and Rego Park.

“Do you believe that if we had the resources available in our schools, we would want to ship our kids off two hours away?” Reid asked the officials, receiving applause behind her.

The opponents denied being racist, and instead said their main concern is that the DOE would force children to ride on buses one hour to and from school every weekday to get to school. “The DOE will never take my child out of their home and community. Ever,” yelled parent Jeffrey Herskovitz.

Allison Brown, who supports integration, responded that the focus should be on the educational success of every student. “I hope this integration process will result in an acknowledgment from the DOE as well as more privileged parents that all students, regardless of race,” deserve a chance to succeed, she said.

Vijah Ramjattan, CEC 28’s president, said in an interview after the meeting he, too, would like to see a discussion about resources for the district’s failing schools and said the safety of children who might have to travel to a different part of the district is a legitimate concern. “Let’s discuss resources,” said Ramjattan. “Let’s talk about access to the same resources for every school.”

While parents and DOE officials referred to a “plan,” no recommendations have been drawn up yet — the city and WXY have vowed to hold at least four more community meetings in the coming months, and are partnering with a 20-member working group to come up with ideas.

Opponents, though, believe the fix is in, and pointed to the working group as an example — there are six parents in it, but their names are not public. Additionally, December’s CEC 28 meeting quickly became overcrowded and many parents were unable to get in — leaving them angry and some saying they were shut out of the process.

CEC 28’s next meeting is scheduled for Feb. 6 at its headquarters, at 90-27 Sutphin Blvd., but could be moved to a larger location to accommodate more people interested in speaking on the plan.

This article originally misstated the ethnic breakdown of students at Russell Sage Junior High School by including Asians in the figure for whites. The correct figures are 33 percent Asian, 27 percent white, 27 percent  Hispanic and 7 percent black, with the rest multiracial or not reported. We regret the error.

I would like to point out an inaccuracy in the article, JHS 190 Russell Sage is not 62% white. According to the latest DOE data on the school, it is 32% Asian and 30% white. These are two separate races and this should be corrected as it is misleading, hopefully not intentionally.

Editor's note: Thanks for pointing out the error, which has been corrected. The figures were not misreported intentionally. We regret the error.

I wasn't at the meeting but from speaking with parents, the issue is more about allocation of resources. Parents are questioning why the DOE and city are spending millions on consultants when there are the following concerns:

1. A parent in Jamaica mentioned that her school had cockroaches running around in the gym, which is right across from the kitchen. The same school also has a lot of broken equipment and has had trouble getting enough laptops for students.

2. Some elementary schools have lead paint issues that need to be addressed.

3. There are schools that are overcrowded and need more space.

And all these issues you mention Allen Go need to be fixed, but lowering or eliminating admissions isn't going to fix it. You are right - the allocation of FUNDS needs to be equitable, regardless of the population of the school.