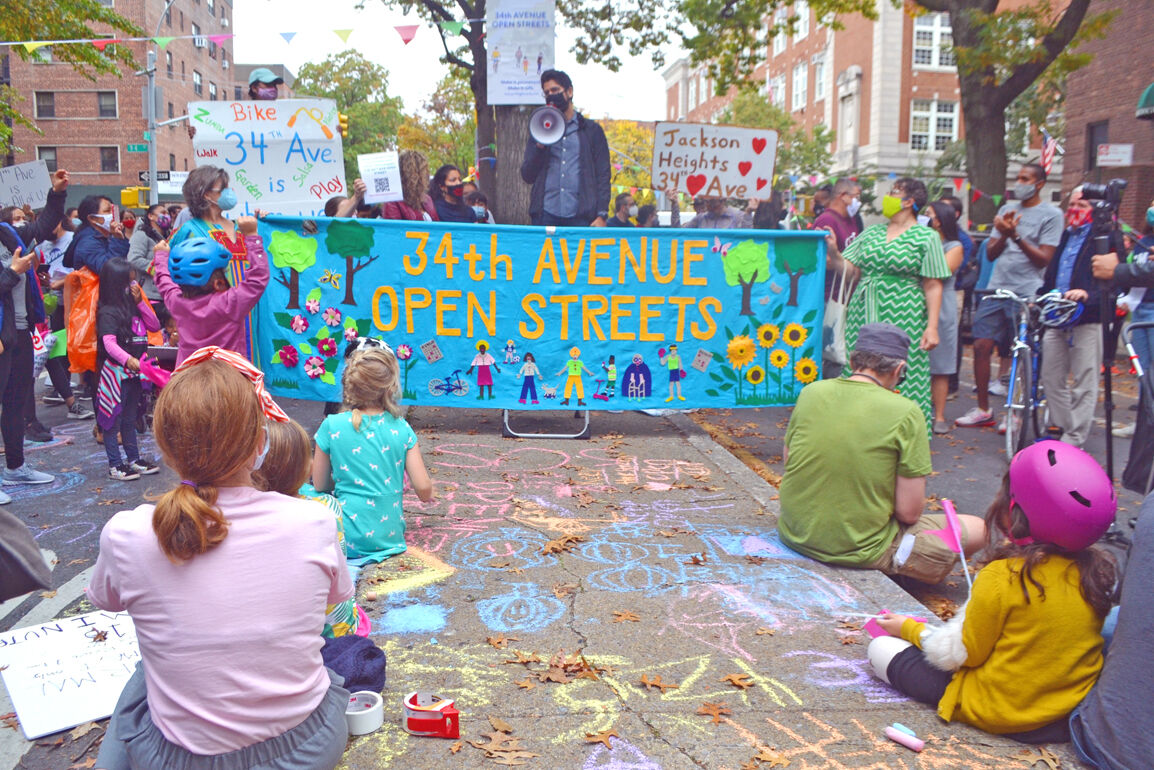 At the end of a rally at which area residents pressed the city to keep 34th Avenue closed to most vehicles and open for fun and families, City Councilman Danny Dromm announced that it would be so. Left unclear is whether the avenue’s Open Streets status will be extended east of Junction Boulevard as activists hope. 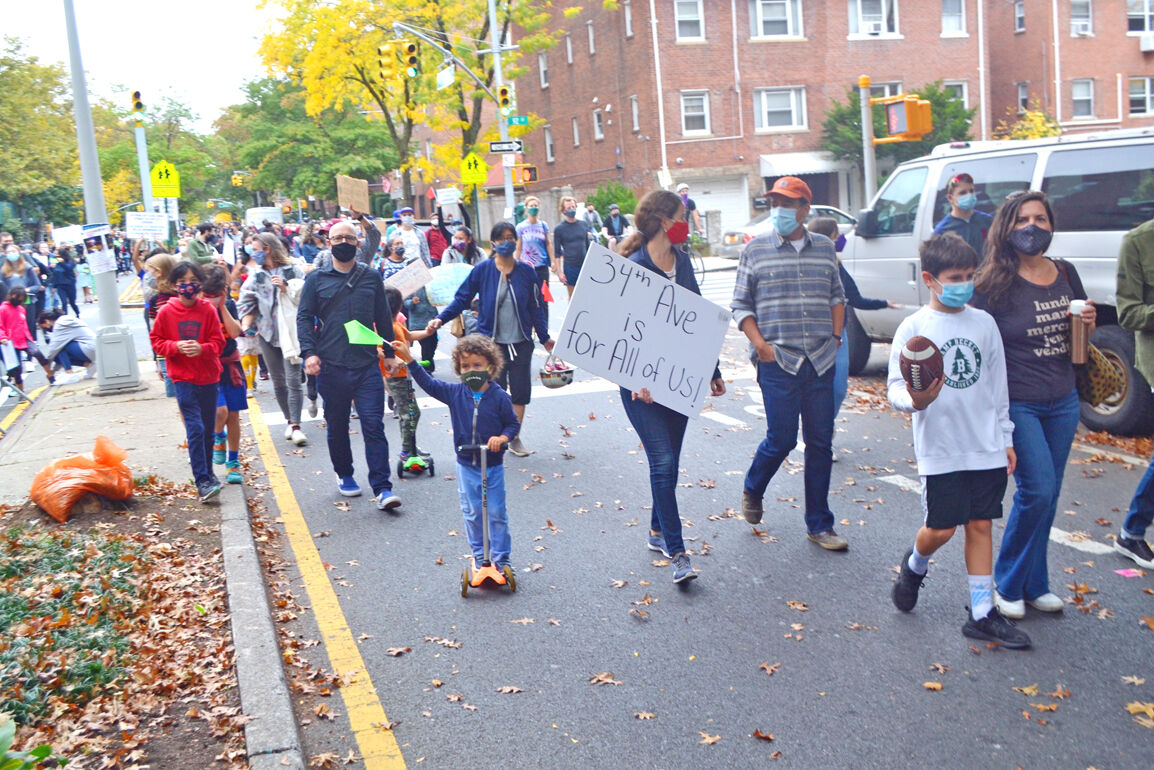 At the end of a rally at which area residents pressed the city to keep 34th Avenue closed to most vehicles and open for fun and families, City Councilman Danny Dromm announced that it would be so. Left unclear is whether the avenue’s Open Streets status will be extended east of Junction Boulevard as activists hope.

“Our children are very safe,” said her mother, Lourdes. “My 5-year-old son learned to ride his bike in the street this summer.”

“Everyone’s child learned to ride a bicycle in the street this summer,” said Dawn Siff of the 34th Avenue Open Streets Coalition.

Their neighborhood has enjoyed the relatively traffic-free avenue since last spring when it was named an Open Street in response to the COVID-19 pandemic, which had people holed up in their homes for weeks or even months.

And folks in Jackson Heights should be able to enjoy 34th Avenue a good deal longer.

“Yesterday I spoke with the [city’s Department of Transportation],” Councilman Danny Dromm (D-Jackson Heights) said Saturday in Travers Park. “There is an agreement with the DOT to make the changes to 34th Avenue permanent.”

The announcement came at the end of a 17-block march by residents of Jackson Heights and Corona with the aim of asking the DOT to do just that.

Since spring, neighborhood residents, most members of the 34th Avenue Open Streets Coalition, are up at 7 a.m. to place barricades at the eastern and western ends of each block on 34th from Junction Boulevard to 69th Street; and are back at 7 p.m. to move them aside.

Area residents can still park on 34th Avenue as long as there is space. North-south traffic is unimpeded, and there are no retail businesses or commercial properties until the very western section near 69th.

Resident drivers needing to make a turn do need to exercise more care.

Saturday’s march, with sign-carrying walkers, cyclists, roller bladers and scooters, began just west of Junction Boulevard and went to 78th Street, where the march made a right turn into Travers Park.

It was preceded by a mini pep rally at which Siff, Nuala O’Doherty Narando and other residents spoke of their desire both to make the change permanent and to extend it eastward across Junction Boulevard into Corona as far east as 114th Street, where the roadway ends.

“We’re not leaving our Corona neighbors behind,” Siff said.

She and others also gave shoutouts to coalition member Jim Burke — “The mayor of 34th Avenue,” Siff said — who was hospitalized.

Cruz at one point was asked to adjust the megaphone she was using.

“The first time in my life I’ve been told I’m not loud enough,” Cruz remarked.

Dromm said he will insist on extensive community input as plans are drafted by the city. A DOT spokesman, in an email on Monday, said that is already in the works.

“DOT had been doing detailed planning for 34th Avenue even before the COVID pandemic, including through upgrades to the existing bike lanes and new designs to improve pedestrian safety on this distinctive street,” the spokesman said.

“The 34th Avenue Open Street will not end on October 31st,” he continued. “We are thrilled at the reception that it has received these last few months, and we look forward to working closely with community groups, elected officials, local schools and advocates on the best plan for the street’s long-term transformation.”

Whether the agency intends changes east of Junction Boulevard is not clear.

The DOT said its experts “look forward to continuing a robust, detailed and inclusive discussion among stakeholders” at Community Board 3’s Transportation Committee meeting that was set for Wednesday evening on Oct. 28.

Residents didn’t even have to be attending the rally to voice their support of making the change permanent, and extending it into Corona.

“I think it’s a good idea,” said Nathaniel Daniels of Corona, who was walking along 34th shortly before the rally organizers began setting up. “My child and my grandchild come here every day.”

So does Barbara McCarthy of Jackson Heights with her dog, Sammy, the latter considering himself the street’s unofficial greeter and ambassador. She too liked the coalition’s idea.

“The children are playing,” McCarthy said. “They have Zumba lessons. There have been English as second language classes on the block. Seniors play bingo.”

As for residents’ desire for an extension to 114th Street — which would run right out to the Grand Central Parkway — little information was available. Dromm declined to comment, and messages left with the office of Councilman Francisco Moya (D-Corona) were not returned.

The DOT did not address the issue in response to a follow-up email.

This story was edited to reflect that the Open Streets program is open-ended with no existing end date. We regret the error.

For so many reasons, but now this....so glad I got out of Jerkson Heights!