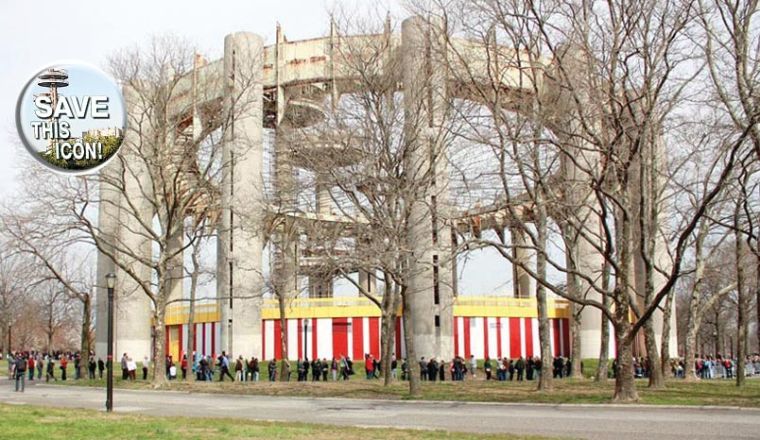 The queue of people waiting to get inside the New York State Pavilion’s Tent of Tomorrow at Flusing Meadows Corona Park during a single day of public access Tuesday stretched all the way across the bridge over the Long Island Expressay and past the Queens Zoo. Those who were there during an official announcement got to hear the decayed site declared a “National Treasure” by a preservation group, which could assist in fundraising for its restoration. 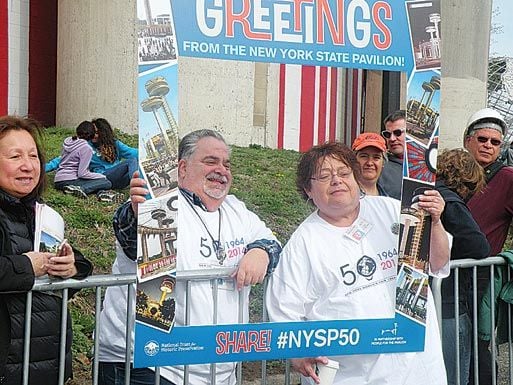 Artie DeGennaro and his wife, Lois, pose for a picture outside the New York State Pavilion on April 22, when it was opened to the public.

The queue of people waiting to get inside the New York State Pavilion’s Tent of Tomorrow at Flusing Meadows Corona Park during a single day of public access Tuesday stretched all the way across the bridge over the Long Island Expressay and past the Queens Zoo. Those who were there during an official announcement got to hear the decayed site declared a “National Treasure” by a preservation group, which could assist in fundraising for its restoration.

Artie DeGennaro and his wife, Lois, pose for a picture outside the New York State Pavilion on April 22, when it was opened to the public.

As the smell of sweet Belgian waffles wafted in the spring breeze, 2,500 spectactors gathered at the New York State Pavilion in Flushing Meadows Park on Tuesday morning to hear it declared a “National Treasure” and see for themselves what’s left of the hulking relic.

The event was held to commemorate the opening of the World’s Fair in 1964 and give visitors a chance to see the decaying pavilion that has been chained off for years. People waited on line for hours to don a hard hat and take a quick peek inside the Tent of Tomorrow.

They were joined by elected and Parks Department officials, but the big news came from Paul Goldberger, a board member of the National Trust for Historic Preservation, who announced the “National Treasure” designation.

Goldberger said the title “recognizes historically, culturally and architecturally important sites to raise awareness and funding for their preservation.” Only 44 locations in the United States have been awarded the designation since the program began four years ago.

He called the Philip Johnson-designed pavilion “a remarkable piece of architecture” and “the finest architectural achievement of the fair.”

The event was organized by Parks and the Pavilion Paint Project, volunteers who since 2009 have repainted the structure with the familiar red and white stripes that decorated it during the fair.

John Piro, who helped organize the group, said he was overwhelmed by the response of the large crowd. “It shows people care about the pavilion and want it preserved,” Piro said.

Earlier this year, Parks held listening sessions to find out what people wanted done with the pavilion. It’s been estimated that it would cost $72 million to fully restore it or $14 million to demolish it.

But Borough President Melinda Katz has come out strongly in favor of saving the structure and said Tuesday that as far as she is concerned, the $14 million can go toward restoring it.

Congressman Joe Crowley (D-Bronx, Queens) said he wants to make the pavilion a national landmark “and we should do all we can to save it.”

Goldberger, noting that for years the future of it had been problematic, added: “For a long time the pavilion’s future was a question mark; in the future it will be an exclamation point.”

The people who came for the opening were a mixed bag, from those who went to the fair and wanted to renew the positive feelings it invoked to restoration supporters and the curious who wondered what the hype was all about.

Christopher Dean traveled from Boston. He grew up in New Haven, Ct. and remembers the transportation exhibits from the fair, including the Avis antique car ride.

Artie DeGennaro and his wife, Lois, of Oceanside, LI, both grew up in Queens. He remembers singing with his school at the pavilion during Brooklyn-Queens Day. “I had a camera and I saw bandleader Guy Lombardo standing with Robert Moses and Mayor Robert Wagner, and I asked to take their picture, which they agreed to,” DeGennaro said. “I have lots of good memories.”

DeGennaro, who was raised in Bayside, said he and his family went to the fair almost every weekend it was open for two years. “That was our vacation,” he said.

Sueann Hoahng grew up in Chinatown and still lives in Manhattan. She came to the fair with the Henry Street Settlement House at the age of 6. “Everyone was well dressed and well behaved,” Hoahng said. “The Fountain of the Planets was amazing and I remember the Belgian waffles.”

Valerie Barbarite grew up in Maspeth and went to the fair with her drum and bugle corps, performing at the pavilion. “We marched in formation and played our instruments,” Barbarite said.

David Steinberg hails from Bayside and said he has a vague memory of going up the elevator to one of the pavilion’s three observation towers. “I want the pavilion preserved,” Steinberg said. “It’s criminal that it was allowed to decay so long.”

A food truck serving Belgian waffles, which became popular during the 1964-65 fair, was a hit with visitors on Tuesday, though the price has escalated from 99 cents then to almost $10 now.

Most of the pavilion, which includes the observation towers, the Tent of Tomorrow and the Theaterama, now home to the Queens Theatre, has been deteriorating since the fair ended. For a time the tent was used as a roller skating rink and a concert venue for Led Zeppelin and other acts.

But in the 1970s, the Plexiglas panels above it began falling and Parks said theyposed a safety risk, so it removed the remaining panels and closed the site. Weather and time have eroded the Texaco terrazzo floor map of the state, and rust and decay can be seen everywhere.

To conserve what’s left of the floor, Parks covered it, and only gravel is visible. But parts of the floor were on display Tuesday to help visitors imagine what it looked like 50 years ago.