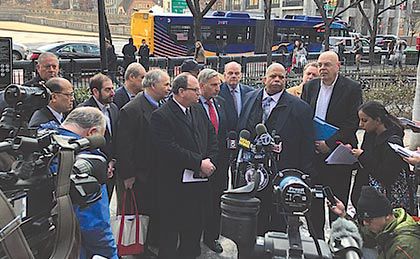 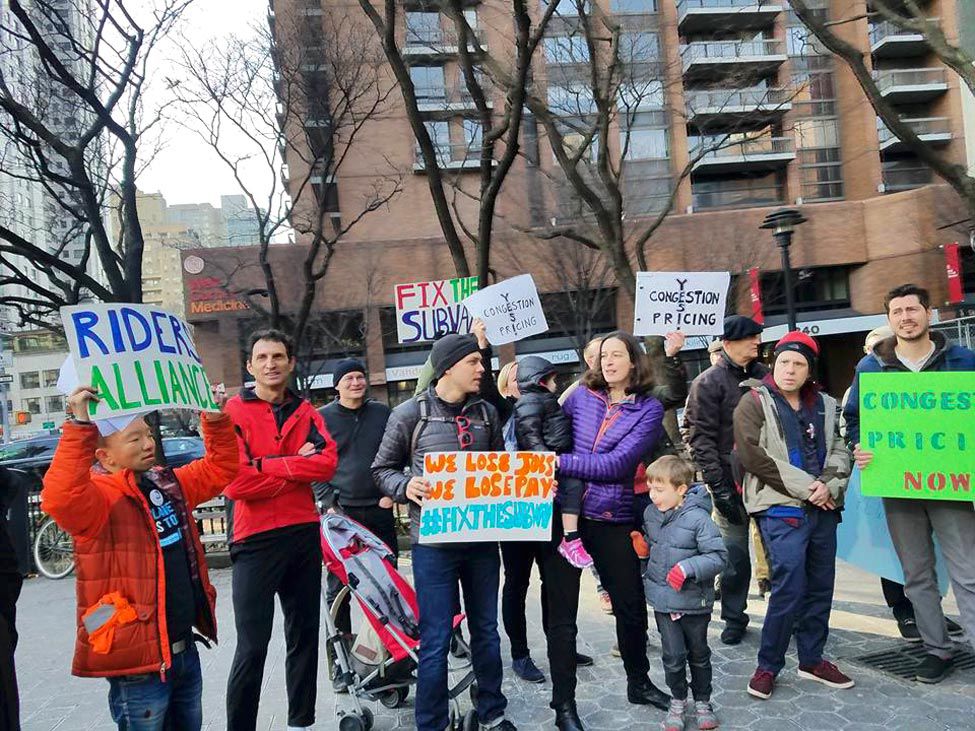 Mass transit advocates staged a protest on Sunday morning across from speakers who oppose recommendations of the Fix NYC panel.

Mass transit advocates staged a protest on Sunday morning across from speakers who oppose recommendations of the Fix NYC panel.

Whether one likes or dislikes the report from Gov. Cuomo’s Fix NYC panel on congestion pricing, at least everyone has an opinion.

The 35-page report is a combination of recommendations that would charge drivers the price of an E-ZPass toll for entering much of Manhattan, with additional charges for trucks, taxis and other vehicles for hire.

The stated aims are to reduce traffic congestion below 60th Street and secure money for the Metropolitan Transportation Authority’s mass transit improvements.

The report estimates that various fee programs could raise between $810 million and $1.1 billion in revenue per year.

But many oppose it.

“Congestion pricing would be disastrous for Queens, Brooklyn and Long Island residents,” Weprin said Sunday. “The tolls would inadvertently place a tax on middle-class communities and small businesses in these areas and raise the cost of goods and services from these areas, while also limiting the competitive ability of local businesses.”

He said drivers who rely on the free bridges would have to pay each and every time they travel into the city, in addition to vehicle registration fees, fuel taxes and other charges.

“New York cannot afford to break the backs and empty the wallets of its outer borough locals to ‘Fix NYC.’”

Grodenchik accused the state of trying to make up for decades of short-funding mass transit by slamming middle class residents.

“If this wrong-headed plan is implemented and ‘successful,’ traffic speed in the core area of Manhattan will still be less than 6 mph, which is a bill of goods I am not interested in buying,” he said. He added that by the authors’ own admission, the increase in traffic speed would be unlikely to reduce congestion. He cited a section of the report that states that average vehicular speeds could increase by 9 percent. He applied that to the study’s finding that taxis in the Midtown Core in 2016 averaged 4.7 miles per hour.

The report does recommend — based on studies of similar plans in other cities in the United States and Europe — that the state needs to consider transit improvements in the outer boroughs as a first step. Cuomo last week said he will discuss the alternatives with the Legislature over the next several months.

“There is no doubt that we must finally address the undeniable, growing problem of traffic congestion in Manhattan’s central business district and present a real, feasible plan that will pass the legislature to raise money for MTA improvements, without raising rider fares,” he said.

Cuomo believes a uniform pricing model for for-hire vehicles that discourages continuing presence in the central business district and measures to encourage truck deliveries on off-peak hours are necessary.

The governor, “as a born and raised Queens boy,” acknowledged that costs must be kept down while encouraging use of mass transit — which is poor in many communities in Eastern and Southeast Queens.

“We must also find a way to reduce the costs for outer borough bridges in any plan ultimately passed,” Cuomo added.

Rebecca Bailin of the Riders Alliance slammed Weprin for grandstanding.

“David Weprin is standing up for the few people who are rich enough to drive and park in Manhattan, and he is ignoring the needs of the vast number of working- and middle-class New Yorkers who rely on the subway and buses,” Bailin said. “The congestion pricing plan ... is a progressive way to fund urgent repairs to the transit system so that working people can get to their jobs, pick up their kids and keep their medical appointments.”

The plan was subject to lively discussion Monday night at a meeting of Community Board 13, where it proved one of the few issues capable of dividing Councilmen Donovan Richards (D-Laurelton), who supports the proposal, and Daneek Miller (D-St. Albans), who called any cost increases “unconscionable, immoral” until Eastern and Southeast Queens receive more and better mass transit options.

At that same meeting, Bob Friedrich, president of Glen Oaks Village, offered a litany of existing taxes and fees that all were created to fund the MTA, including the $15 auto use tax; $30 metropolitan commuter registration fee; the MTA sales tax surcharge; the MTA mobility tax and the 50-cent taxi surcharge.

“Now we’re being told, ‘Just agree to this congestion toll plan,’ and we’ll finally create that elusive sustainable revenue stream that these other costly fees, which we are still paying, failed to do,” he said.

“The next step is for Governor Cuomo to use his legendary political skills to move these recommendations from proposal to reality,” he said.

The New York League of Conservation Voters called the plan “a long-welcome solution to a 40-year problem, which has escalated in the last decade, and threatens to spiral out of control.”

The Move NY Campaign has been pushing a plan for the last few years to add tolls at East River crossings while reducing them elsewhere, such as the Whitestone and Throgs Neck bridges, and dedicating some of the money to maintaining roads and highways. Alex Matthiessen, the group’s director, backed Friday’s proposal.

“The Fix NYC’s proposal sends a clear signal: that in order to fix New York City’s broken transit network, everyone must chip in,” he wrote. Jaqi Cohen of the Straphangers Campaign said the plan has the potential to do just what it proposes: faster bus service and a modernized subway system. State Sen. Leroy Comrie (D-St. Albans) said in an email that the proposal does not go far enough to ameliorate transit issues for his constituents.

“What working people and seniors in Southeast Queens need are creative solutions to our transportation issues, like Council Member Miller’s Freedom Ticket proposal [for reduced Long Island Rail Road fares], something which the MTA had previously agreed to implementing as a pilot program before reneging on its commitment to the community,” he said.

“While reducing traffic and fixing our crumbling transit infrastructure is a significant priority, burdening residents in areas with inadequate bus and subway service is unacceptable,” he said. “It’s time to reassess how money is spent by New York state and the MTA rather than merely adding a tax on the middle class to raise revenues,” he wrote.

The Independent Drivers Guild, which represents more than 60,000 drivers of app-based for-hire vehicles, also is opposed.

“After years of pay cuts and exploitation, many New York City for-hire vehicle drivers are earning less than minimum wage after expenses,” guild founder Jim Conigliaro Jr. said in an email on Friday. He said any further financial burdens would be devastating, particularly if drivers are not protected from pay cuts in response to new fees.

Doug Kellogg of the Reclaim New York Initiative said it would amount to just another massive tax on New Yorkers while failing to address internal MTA spending issues.

And this year's state elections will determine the fates on all state legislators and executives who support or oppose congestion pricing statewide. [cool]