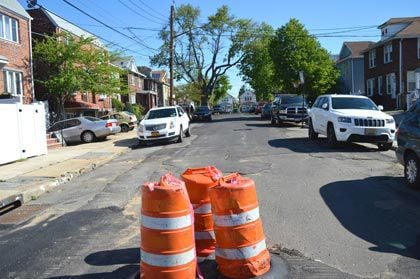 Cones left in the middle of the street and ripped up roads are a common sight in Centreville as workers for a massive sewer and water main project walked off the job four weeks ago. Residents are fuming at the mess left behind. 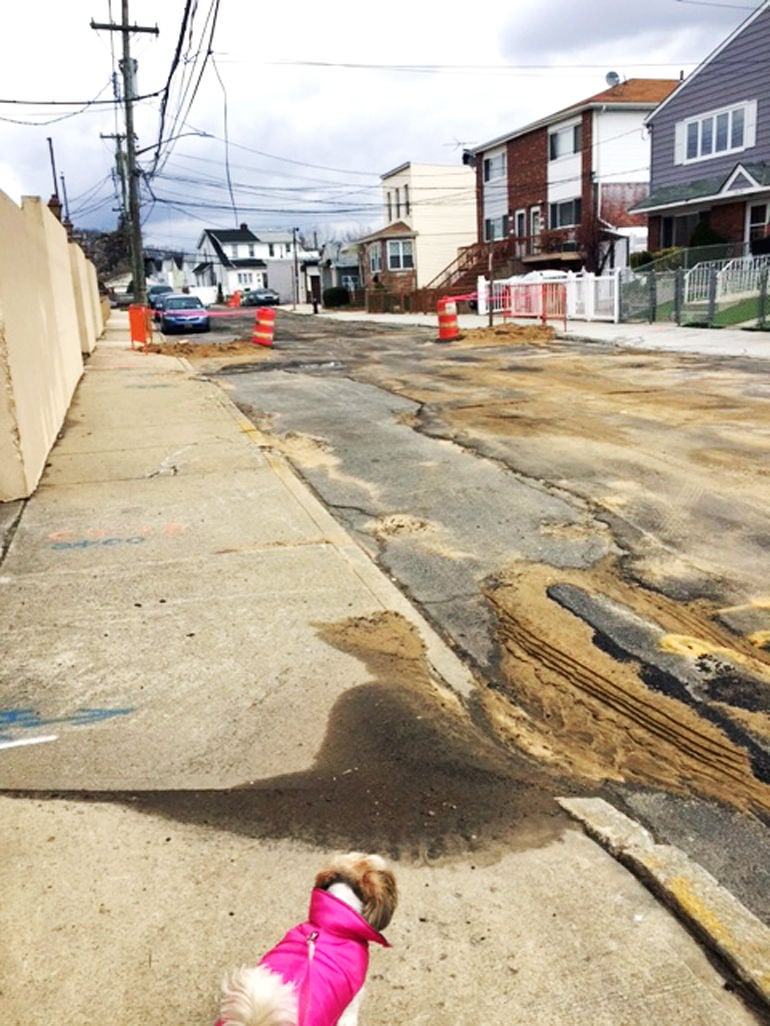 The mess left behind on Tahoe Street.

Cones left in the middle of the street and ripped up roads are a common sight in Centreville as workers for a massive sewer and water main project walked off the job four weeks ago. Residents are fuming at the mess left behind.

The mess left behind on Tahoe Street.

It only took 35 years to start, what’s another four weeks delay?

Workers at the Albert Road sewer project in the Centreville section of Ozone Park have not been spotted on site for close to a month, because they’ve been pulled for another job elsewhere.

While some area residents joked they’re enjoying the peace and quiet, they’re also fuming because the neighborhood has been left a mess by the workers there.

“People now have to live with the mess for a longer term than they should have to,” said Ozone Park Civic Association Howie Kamph. “It’s not fair to the residents.”

A Chronicle reporter on Monday saw streets ripped up and uneven, water mains exposed to the elements, and cones — which looked to be covering a pothole — left in the middle of the street.

“It looks like a third-world country,” said resident Joanne Cutitto. “It’s like there’s no pride in their workmanship.”

The Department of Design and Construction did not respond to multiple requests for comment on this story — including if they’re chasing down the contractor, Maspeth Supply, to finish the taxpayer-funded work in the time laid out in the contract.

A person answering the phones at Maspeth Supply — which, according to city records, has received hundreds of millions of dollars in city contracts for water main and sewer work — said to send an email to the company’s owner, which was not responded to by press time.

The HWQ411B project seeks to place 12 miles of sidewalks, roads and curbs and replace two miles of sewer lines and three miles of water mains within the community.

Representatives from city agencies told Kamph’s civic last month that a majority of the sewer and water mains have been placed in the community.

The anticipated completion date for the entire project is sometime in 2018.

It was first proposed during Mayor Ed Koch’s first term — before the councilman for the area, Eric Ulrich (R-Ozone Park), was born — but was delayed several times, in part due to discussions with homeowners over how much land the city wanted to take for the work.

At the civic meeting last month, residents fumed at the quality of work and behavior of workers at the site.

“What we’re not delighted with is the daily nuisances and quality-of-life concerns,” Ulrich said at that meeting, echoing his constituents concerns.

Cutitto said she’s seen elderly people fall on the uneven streets, heard of rat infestations in people’s homes and seen the vermin rifling through trash cans. Since the work has began, flooding has become worse on rainy days near her home, she said. She’s also had to clean her white dog every time after a walk, due to the tar and other materials left behind by workers.

“It’s annoying for me,” the resident said. “They should be here cleaning.”

State Sen. Joe Addabbo Jr. (D-Howard Beach), whose chief-of-staff lives in Centreville, said delays on big projects are not uncommon but still frustrating and might end up being costly.

“The longer you wait you have labor costs and supply costs going up,” Addabbo said Monday.

In a follow-up interview Tuesday, the senator told the Chronicle the city is in the process of redesigning part of the project because the placement of a water main could have interfered with utilities.

“That could delay it another one to two weeks,” Addabbo said.

One of the concerns of the project’s delay is its effect on a nearby school under construction.

“People are mainly wondering what effect it’s going to have on that,” Kamph said. “Is it going to be able to open in time?”

The school, to be called PS 377 and expected to open in September, cannot be functional until all sewer and water mains are finished.

Addabbo isn’t concerned this delay will have any impact on the school — which will first open to kindergarten this year, then first-graders in 2018 and so on until it reaches fifth grade.

“That school is definitely opening,” he said. “The city will work 24/7, work around the clock to get it open.”

But for Cutitto, who worked in the school system, the concern is getting the area to look “pretty” before children walk in the doors.

“Let’s get it over with before the children have to come to school,” she said. “They deserve something nice.”