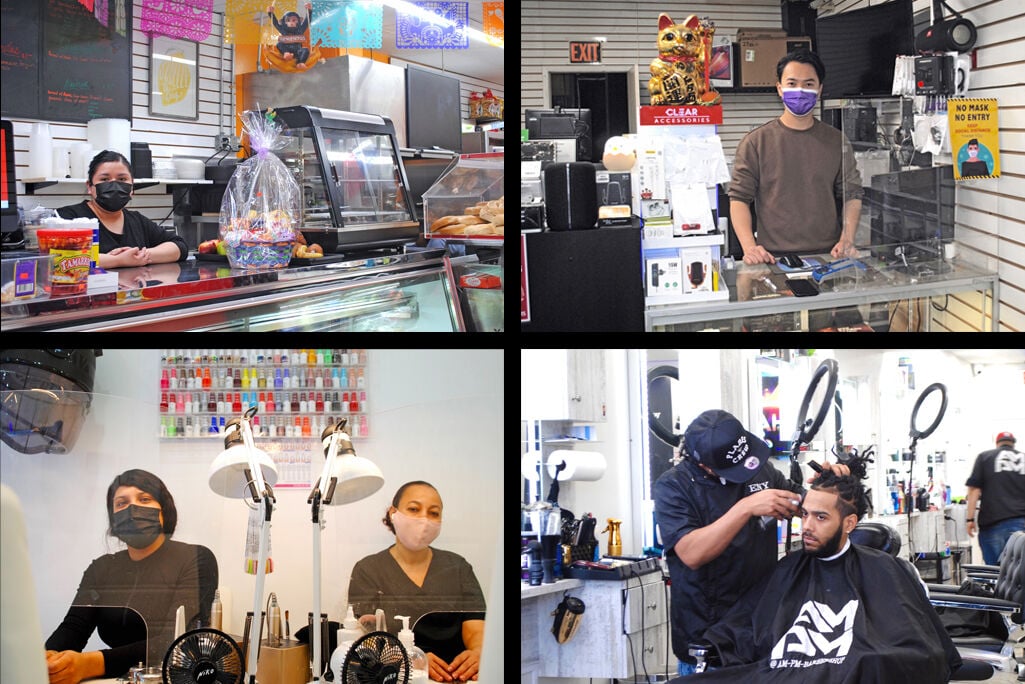 Yanette Ramales, top left, works at her family’s La Plazita Deli and Grocery, one of the new businesses to recently pop up on Jamaica Avenue. Other business owners include Jairo Ng of HDA Global II, top right, and Lexlisbette Rosario of Le’Camille, above left, here with co-worker Yanelis Rodriguez. Customer John Lopez, above right, gets a cut at newly opened AMPM Barbershop. 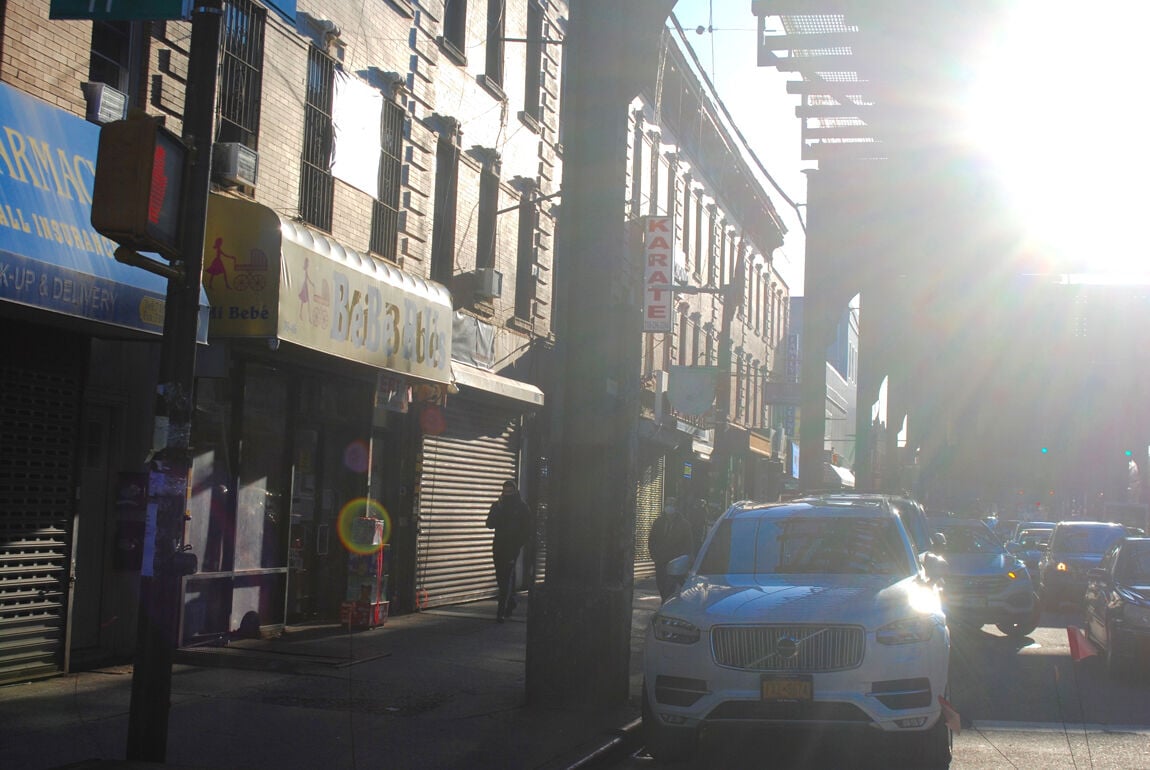 New businesses have been opening up along Jamaica Avenue in Woodhaven, and owners say things largely seem to have returned to a sense of “normal.”

Yanette Ramales, top left, works at her family’s La Plazita Deli and Grocery, one of the new businesses to recently pop up on Jamaica Avenue. Other business owners include Jairo Ng of HDA Global II, top right, and Lexlisbette Rosario of Le’Camille, above left, here with co-worker Yanelis Rodriguez. Customer John Lopez, above right, gets a cut at newly opened AMPM Barbershop.

New businesses have been opening up along Jamaica Avenue in Woodhaven, and owners say things largely seem to have returned to a sense of “normal.”

Despite facing multifold challenges during the pandemic, businesses on Woodhaven’s Jamaica Avenue have not only proven their resilience, in some cases the corridor has actually attracted a new class of entrepreneurs.

The commercial strip, which runs in the shadow of a subway line, with limited street and sidewalk space, did not take to outdoor dining over the summer to the degree that those in other neighborhoods did. While the economic downturn ended up shuttering some storefronts, in a handful of cases, new businesses have already begun to pounce on the spaces and make a fresh start.

But despite the good news, Olivares was candid about the strip’s Covid challenges. In theory, the biggest threat to business should be the virus itself, and subsequent shutdowns. As of Tuesday, Woodhaven had the second-highest level of Covid positivity in the city.

On top of that, quality-of-life issues have popped up during the pandemic. Olivares said that ever since last summer trash has been piling up as a result of an uptick in illegal dumping — a side effect of sanitation cuts.

But in spite of those health and hygiene concerns, as the sun set on Woodhaven last Friday evening, groups of residents walked up the strip window-shopping or socializing. There was undeniably a sense of spring revival in the air.

Yanette Ramales, a member of the family that runs La Plazita Deli, a Mexican grocer and sandwich shop that opened in March, said that the idea to start a business boiled down to “opportunity.”

Ramales’ uncle, who works in the food industry, noticed the vacant space around Jamaica and 96th Street and enlisted his family members to work in the kitchen and man the register.

“Opening up a business wasn’t something that we had in mind,” she said. “But it was mostly my uncle’s idea. He wanted to own a business. He’s a chef. So he just said, ‘Why not?’”

The deli has distinguished itself with bright “papel picardo” flags and homemade Mexican fare like tortas and tacos, made with imported spices and cheeses.

Though Ramales said she thinks more of the neighborhood’s Latin community tends to live farther west, that has allowed the deli to stand out more on the stretch east of Woodhaven Boulevard.

Jairo Ng, who opened up an electronics store and repair shop called HDA Global II around 88th Street in December, said he began looking for a space along Jamaica during the pandemic. Ng, who owns another electronics store in Corona, said he was looking to replicate the model in a friendly, residential neighborhood.

“A lot of old people — they don’t know anything about technology,” Ng said. “So of course they won’t go to Manhattan to fix a computer because it’s too expensive, so yeah, it’s good to help them.”

For him, it was all about getting a good deal on the space, so that he could fit as much merchandise as he can. The shop used to be a 99-cent store, but the former owners vacated after retiring.

Jonathan Jerez, a barber at AMPM Barbershop, said that the new business was branded for customers looking for a more luxurious haircut experience.

“We do hot towel shaves. We do color enhancement. We do hair dying. We do facial massages. If you want to run a barbershop, you have to be up-to-date. You have to be appealing to the eye,” Jerez said.

Next to the window, a big-screen TV played a boxing match last Friday afternoon. “Always making power moves,” reads a neon banner in the reception area. The branding of the shop, Jerez said, has helped attract customers who trust that the very carefully designed business has higher cleaning standards.

Customers “seem more wowed than anything else. Not really nervous,” Jerez said.

Le’Camille, a new hair and nail salon next door to AMPM, has a similar sheen. Its owner, Lexlisbette Rosario, said that she worked in construction before, so she was able to renovate much of the interior of her shop herself. She said that as the weather warms up and the shop has seen more foot traffic, she’s been able to attract more regulars.

Though Chef Toribio 2, a Latin restaurant to crop up over the past year, built a large outdoor seating area, on Monday afternoon it was serving mainly takeout. It’s not alone in its shift away from outdoor seating. Those diners who seek a sit-down restaurant on the avenue tend to eat indoors. The loosening of restrictions has allowed many restaurants to bail on street seating.

Pop’s Cocina and Bar, an established Latin-American restaurant on the corner of 86th Street, was “one of those businesses that worked with DOT to play around with outside seating,” according to Olivares.

But as of Friday evening, the bustling restaurant was serving patrons inside the main dining area with plastic dividers between tables, marking something like a return to pre-pandemic normal.

That sense of business as usual was shared by several of the new stores.

“At least here [business] feels like it’s back to normal. Except for everybody wears a mask, it’s like nothing ever happened,” said Jerez, the AMPM barber.