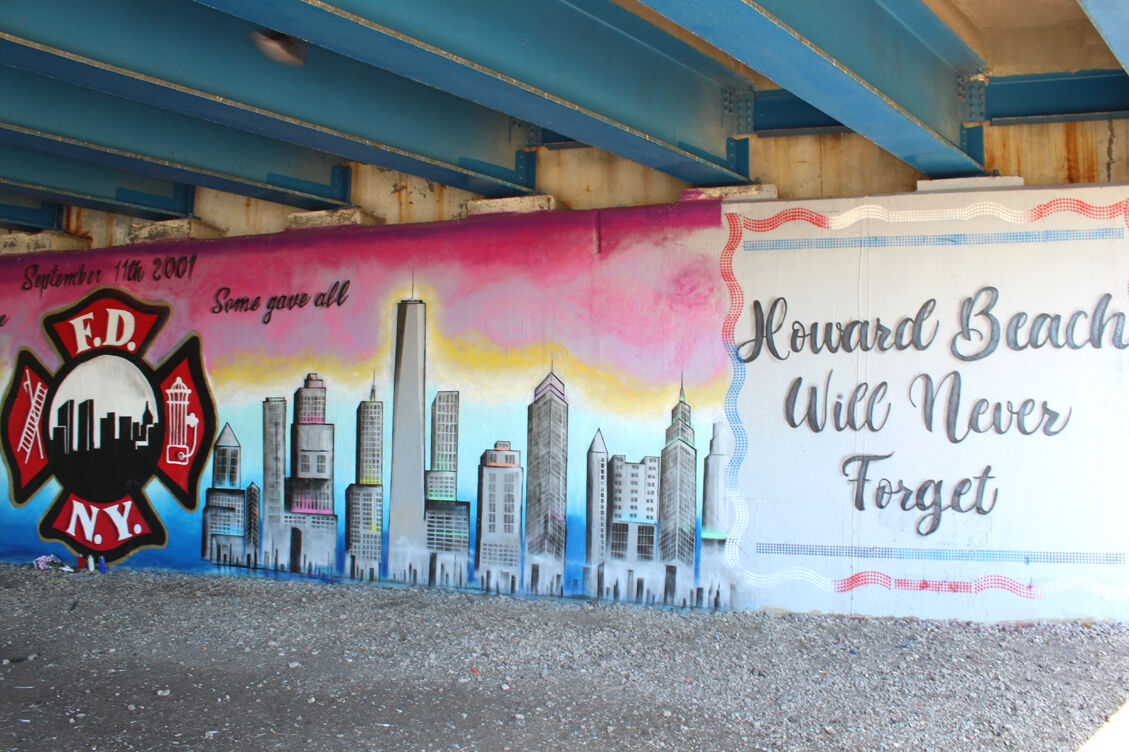 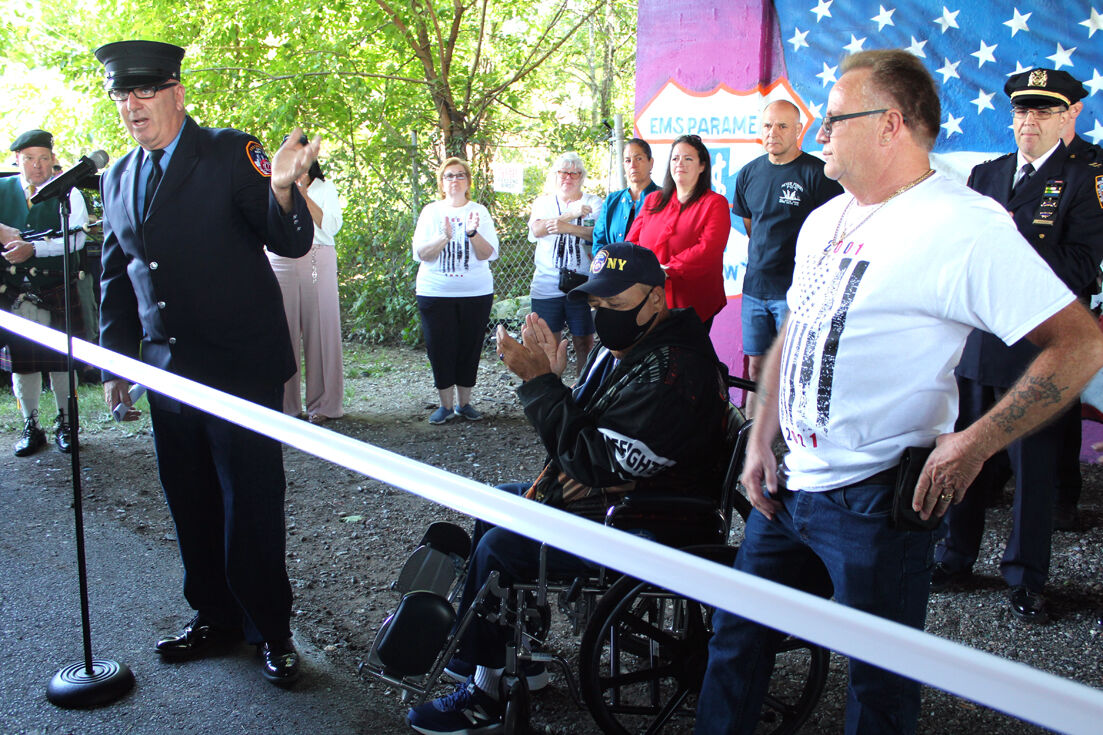 Jay Frango, left, an FDNY firefighter with Engine 260 and a 9/11 first responder, helped fund and organize a new mural in Howard Beach. 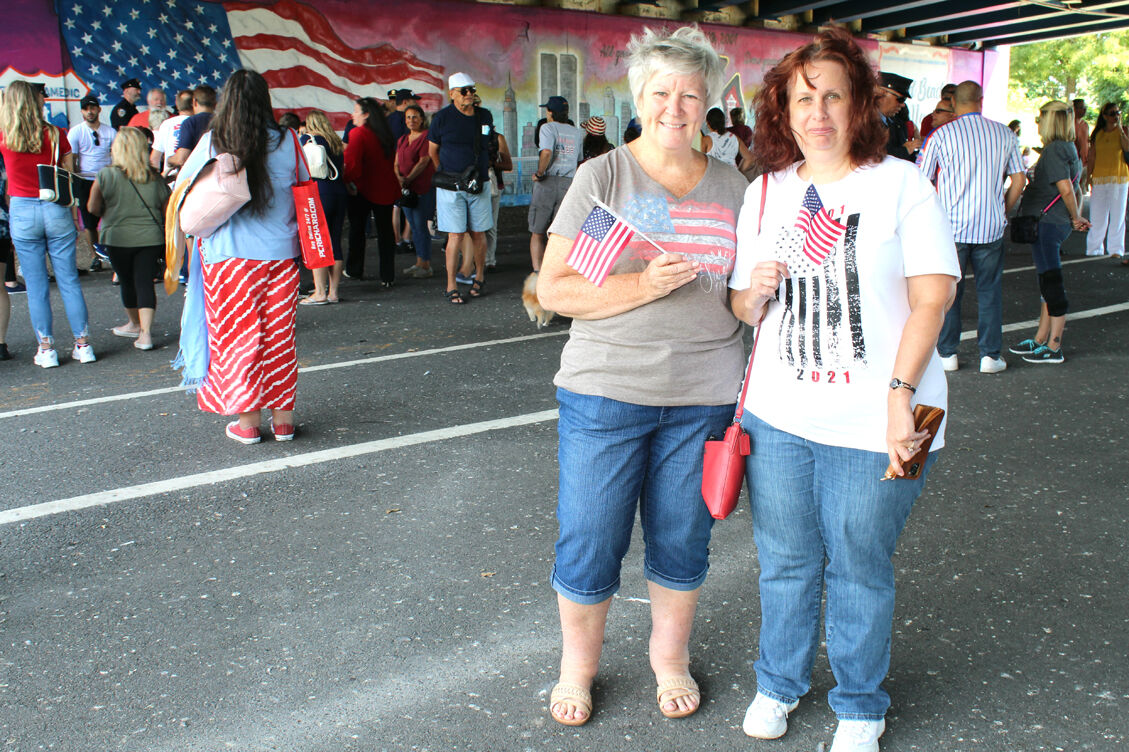 Jay Frango, left, an FDNY firefighter with Engine 260 and a 9/11 first responder, helped fund and organize a new mural in Howard Beach.

A memorial commemorating the Sept. 11 attacks was unveiled in Howard Beach on Saturday, a project that was many years in the making and created by local artists with help from community groups and volunteers joining together.

“We have survived many things, including Hurricane Sandy, a pandemic and now we are standing here honoring all those who lost their lives on 9/11 and those who continue to lose their lives because of the effects of going down to the 9/11 site,” said Joann Ariola, president of the Howard Beach Lindenwood Civic Association and City Council District 32 candidate.

The civic association and mural committee held the “Remembering September 11th” ceremony in front of the painting which is located on 84th Street between 157th Avenue and Shore Parkway below the overpass on the border of Howard Beach and Lindenwood.

“Yes, we’re happy that we have this, yes, it is a way of celebrating their lives but still we mourn them,” Ariola said. The mural features 2,977 stars representing those who lost their lives in the attacks on the World Trade Center.

“This area has been an eyesore for many years,” Ariola said. “What we really wanted to do for many years was to beautify this area.”

The mural was painted by Howard Beach locals, Mark Amato, Krissy Amato, Joseph Visconti, John Giramita and Doreen Coffey. Ariola said the project is still ongoing and soon the wall on the opposite side of the street will have a mural as well.

Community leader Frank Gulluscio announced that the alley, which was commonly referred to as “God’s way” with St. Helen’s Church across the street from Rockwood Jewish Center, is proposed to be renamed “Never Forget Way.”

The plan came to fruition with help from FDNY firefighter Jay Frango, who found the artists and donated funds to fuel the project. Frango was a 9/11 first responder and spoke of spending 37 days straight on “the pile.” He called up fellow first responders and key players like firefighter John Stewart to join him as he spoke in front of the mural.

“I lost 43 of my friends that day,” Frango said through tears.

“I just could’ve never imagined that we could’ve had such a beautiful mural,” he added, thanking the team that put in long days and nights of work, staying up until 5:30 a.m. the morning of the unveiling.

Patty Glaviano of Howard Beach attended the ceremony with her friend Jean Mullin of Woodhaven. In 2001, the two were working together at a law firm on Park Avenue in Manhattan and saw the towers come down. Now, they both work at the same law firm but are located at 3 World Trade Center.

“We will never forget,” said Mullin, recalling seeing people covered in the dirt. “We think about them to this day,” she said.

“It’s beautiful to have something in our community,” said Glaviano. “It teaches the children, too,” she said. “When we’re gone, it still can’t be forgotten.”