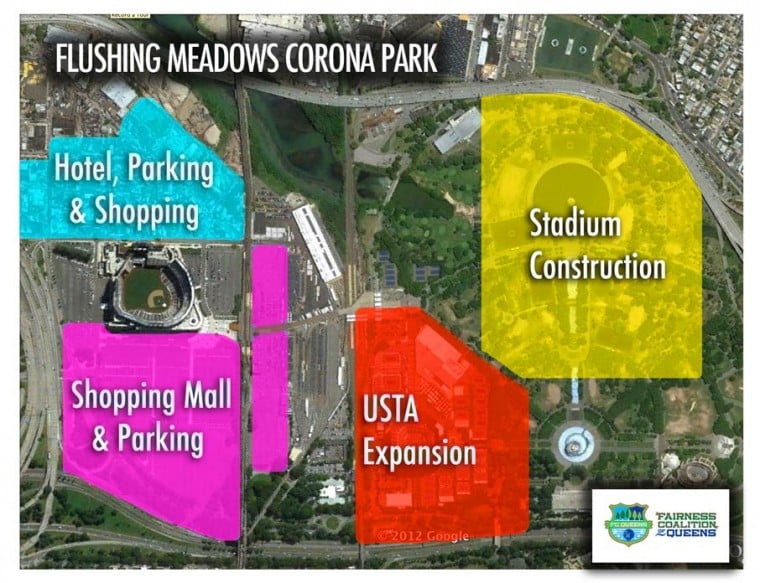 A map shows the location of the three proposed developments in Flushing Meadows Park and one hotel eyed for the neighboring Willets Point. 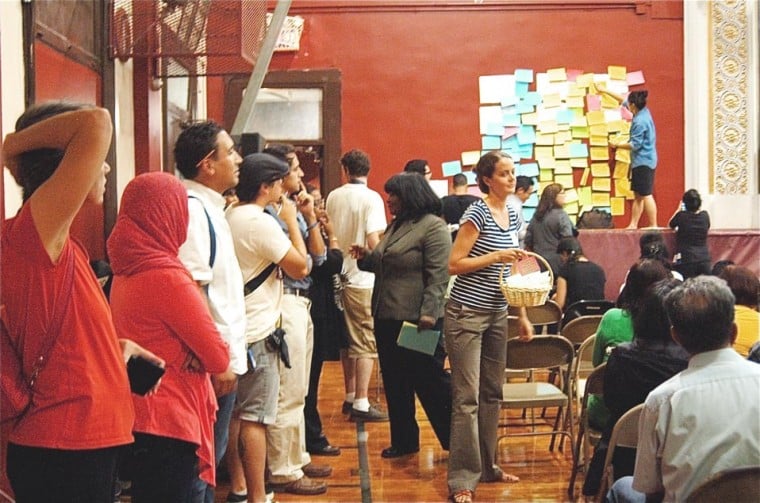 Attendees wrote that Flushing Meadows Park means family and recreation to them and taped these comments on the wall for all to read.

A map shows the location of the three proposed developments in Flushing Meadows Park and one hotel eyed for the neighboring Willets Point.

Attendees wrote that Flushing Meadows Park means family and recreation to them and taped these comments on the wall for all to read.

On Monday at Our Lady of Sorrows Catholic Church in Corona hundreds of Flushing Meadows Park neighbors voiced concerns about development proposals that would subtract open space without adding any affordable housing to the neighborhoods surrounding the park.

“I learned to ride my bike here and my kids might not have that chance,” Queens resident Steven Moyano said.

Although nothing is set in stone, three developments could take away significant green space in the 1,255-acre park. Because the sites are on public parkland, any development would need approval from both the City Council and state legislature and would have to mitigate the used land with an equal amount of new parkland in another location within New York City, not necessarily in Queens.

Major League Soccer is reportedly eyeing land behind the Hall of Science to build a nine-acre, $300 million, 25,000-seat facility and nine public soccer fields. The league said it would fund renovations of public sports fields within the park, including cricket, soccer and volleyball fields along with adding parkland to the city.

Lastly, a 1,400,000-square-foot shopping mall on public land was proposed for Willets West, a section of the park now used for parking next to Citi Field, which is on public land, and Willets Point, which is not on park property.

“There is some confusion, but Willets West is on public park land,” said Joseph McKellar, a spokesman with the Queens Congregations United for Action.

“We use the park to play soccer. It’s where our children learn to play. We don’t just want to watch soccer, we want to play,” Make the Road New York Deputy Director Theo Oshiro said.

Many people cheered and clapped when speakers denounced the possible loss of open space, but one retired nurse and Corona resident, Elna Tullock, said all development would be good.

“There’s lots of space, but that’s my opinion,” Tullock said. “It’s good to have these meetings to express ideas.”

Politicians and spokespeople with QCUA, MRNY and several other Queens community organizations who hosted the town hall want to start a conversation wherein the community, which has a large poor and immigrant population, has a say in the future of the park.

“Neighbors of the park should have a seat at the table and a say in what is happening in their backyard,” Oshiro said.

“Every inch of developed parkland is park space we won’t get back,” Ferreras said.

Although not public land, development at Willets Point, across 126th Street from Citi Field, was also a point of concern. In 2008 the city council approved the Willets Point redevelopment project, which included 2,000 affordable housing units. However, in June of this year Mayor Bloomberg and the Economic Development Corp. announced the Willets West plan and said the affordable houses would be delayed until 2025.

“That’s not just. We had a promise,” said Our Lady of Sorrows Pastor Thomas Healy, adding that the plan is unfair to neighborhood residents who already live two and three families to one apartment.

“They want to displace workers like animals,” he said, adding that the co-op is asking the government to help with a relocation to Maspeth.

All proposals would include constructing more roads and adding more car traffic in the park, Donovan Finn of the Jackson Heights Green Alliance said. MLS’ plans would include a shuttle from the No. 7 train to the proposed soccer stadium.

In addition to the eating up of open parkland and increasing traffic, speakers said the proposed developments would bring part-time jobs without benefits when the neighborhood needs “good jobs,” Maria Alvarez with MRNY said.

Residents broke into small groups and discussed what the park means to them, which for most meant recreation and family. A follow-up meeting will be held on Sept. 27 at PS 19 at 98-02 Roosevelt Avenue at 6:30 p.m.