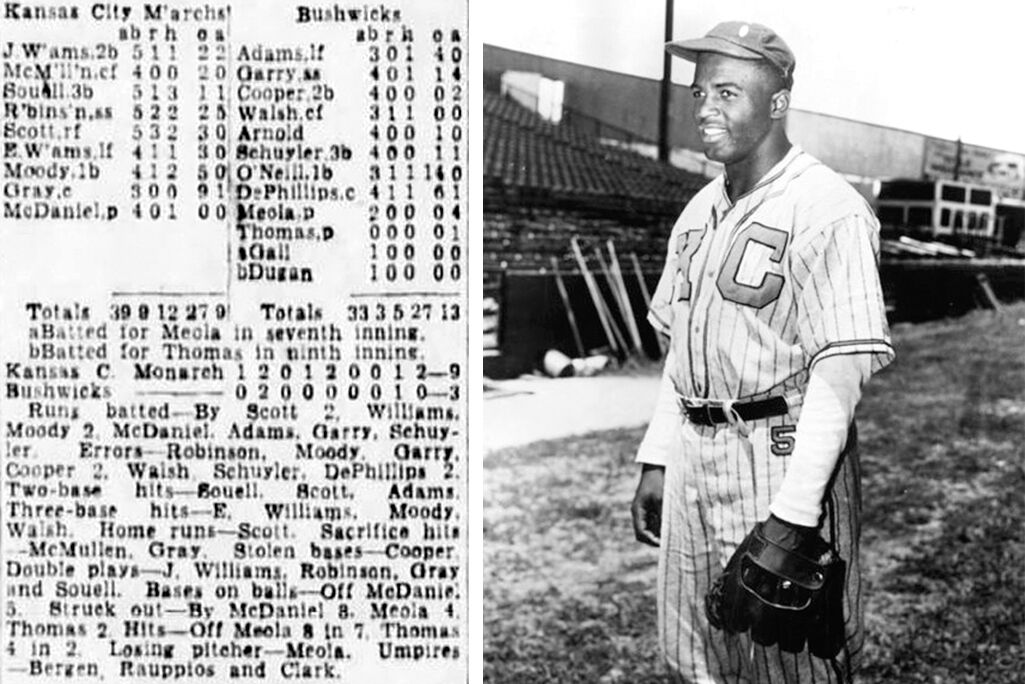 A box score shows that Jackie Robinson, right, in his days with the Kansas City Monarchs, had a pretty good day at Woodhaven’s Deter Park, going 2-for-5 with a pair of runs scored against Max Rosner’s semipro Brooklyn Bushwicks. 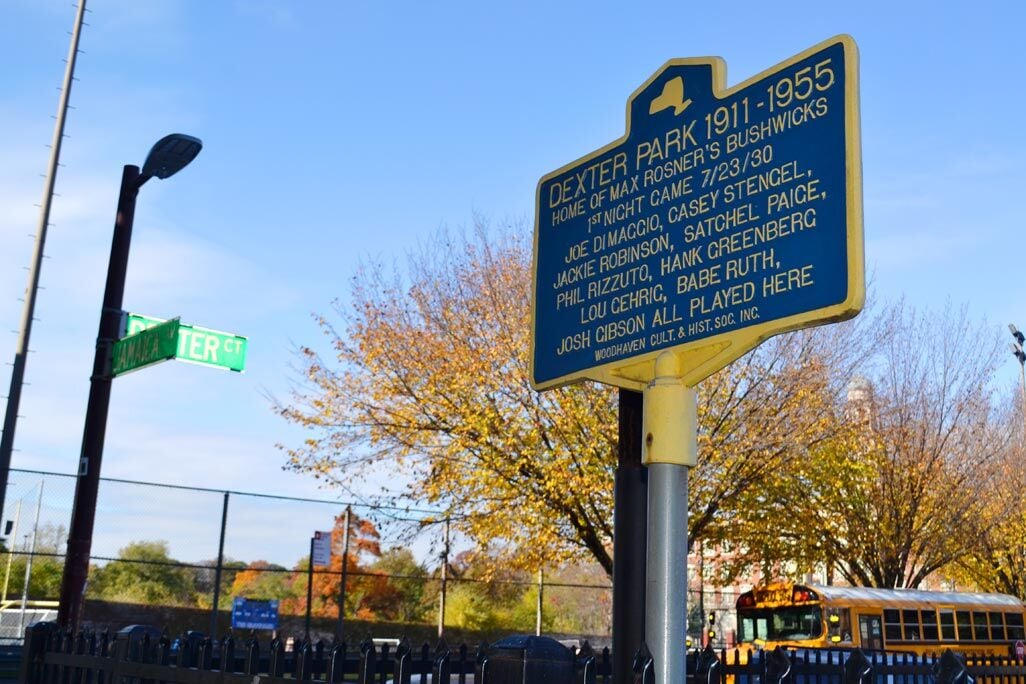 Negro League baseball was a big draw — and big business — at Woodhaven’s Dexter Park between 1920 and the 1950s.

A box score shows that Jackie Robinson, right, in his days with the Kansas City Monarchs, had a pretty good day at Woodhaven’s Deter Park, going 2-for-5 with a pair of runs scored against Max Rosner’s semipro Brooklyn Bushwicks.

Negro League baseball was a big draw — and big business — at Woodhaven’s Dexter Park between 1920 and the 1950s.

With the Mets’ pitchers and catchers reporting to spring training this week, one can walk or drive past Citi Field and the lot that used to hold Shea Stadium and conjure up fond memories of Tom Seaver, Darryl Strawberry and Mike Piazza.

But head down to Dexter Court in Woodhaven, and you might get a similar feeling. And if you don’t know why, it could be the spirits of Jackie Robinson and Leroy “Satchel” Paige, who toiled in baseball’s segregated Negro Leagues before crashing through and integrating the Major Leagues; and maybe those of legends like Josh Gibson, Oscar Charleston and “Pop” Lloyd who never got the chance.

And don’t be taken aback if you start humming Frank Sinatra’s winsome “There Used to Be a Ballpark” when you pass what used to be Dexter Park.

On the site that is now a supermarket and houses, the greatest players and teams in the history of the Negro Leagues would, between 1920 and 1951, be major attractions and play high-caliber baseball at the home field of the semipro Brooklyn Bushwicks. The Bushwicks, fielding white players, for decades boasted future and former major leaguers in their lineup, and would host minor league teams, barnstorming major leaguers, and, before the sport was desegregated, any Negro League team they could schedule.

A plaque erected by the Woodhaven Cultural and Historical Society marks the spot.

Author Phil Dixon of Kansas City, Mo., has written eight books on Negro Leagues history. In a recent telephone conversation, he was direct when asked how much of that history those legendary teams and players made right here in Woodhaven.

What is generally recognized as the era of the Negro Major Leagues ran from 1920 to the 1950s.

Dixon said a man named Nat Strong, a white man who helped organize Negro league baseball in the East, and Max Rosner, who owned the Bushwicks and Dexter Park, found good matches in each other.

“Rosner owned the field and a team,” he said. “Nat Strong controlled the bookings for all Negro League teams on the East Coast.”

Scott Simkus of Chicago is an author and award-winning researcher on the Negro Leagues. He wrote “Outsider Baseball: The Weird World of Hardball in the Fringe” in 2014. His research helped create the first Negro League card set for Strat-o-Matic Baseball. He formerly ran a subscription newsletter, the Outsider Baseball Bulletin.

“Negro League teams were THE draws during the Bushwicks’ season.” Simkus said in an email, saying Rosner devoted most weekends to hosting black clubs. Simkus and Dixon said the top teams could draw between 10,000 and 12,000 fans per engagement.

“At 55 cents a ticket, they were bringing in roughly $6,000 on weekends, which translates to more than $100,000 in today’s money — all for one doubleheader,” Simkus wrote. “Semipro baseball was big business.”

“Every big-name player you can think of, all the Negro League Hall of Famers, played at Dexter Park at least once, but usually dozens of times.”

Dixon said Negro Leaguers played night baseball in Woodhaven in 1930, eight years before the Dodgers illuminated Ebbets Field in Brooklyn. Rosner’s son, an electrical engineer, was the architect of the project.

“The lights at Dexter Field were so good they called them ‘midnight sun lights,’” Dixon said. “The Yankees didn’t even get lights until 1946.”

In his 2019 book “The Dizzy and Daffy Barnstorming Tour: Race, Media and America’s National Pastime” Dixon chronicled a barnstorming tour of a white team led by future Hall of Famer Jay “Dizzy” Dean, who enjoyed his nickname and his brother, Paul, who didn’t care for his.

“The day after the Cardinals beat the Tigers in the 1934 World Series, they went on a two-and-a-half week tour,” Dixon said. “They played 14 games, and only one against a white team.”

The tour stopped at Dexter Park, with Dizzy Dean losing to the New York Black Yankees, 6-0. But he also on that tour pitched against Paige, a man who in 1965, at age 59, would throw three shutout innings for the Kansas City Athletics. They would continue to duel on the barnstorming circuit long after Dean was past his prime.

In his book, Dixon wrote that many sportswriters would gloss over or ignore the play of black ballplayers on the tour.

At least with Paige, Dean did not. An affable man, Dean, when in character, was generous with praise, though often of himself.

“If me and Satch was ever on the same team, we’d clinch the pennant by the Fourth of July and we could both go fishin’ ’til the World Series,” was one of the more famous quotes attributed to Dean.

Dixon confirmed it was true.

Smokey Joe Williams of the Brooklyn Royal Giants in 1924 struck out 25 men in a 12-inning game after coming on in relief —and was the losing pitcher.

In 1936, an aging Oscar Charleston, once a feared hitter and then a player-manager with the Pittsburgh Crawfords, sent himself in to pinch-hit against a hotshot young pitcher from Richmond Hill named Marius Russo, who in a few years would find World Series fame with the Yankees. Simkus wrote that the switch was odd, given that the lefthand-hitting Charleston was putting himself up against a lefty in Russo.

“But Russo made a mistake and Charleston clobbered it over the right field wall for a home run, securing the lead and the eventual victory for the Crawfords.”

The Crawfords, Dixon said, had a unique distinction in 1934.

“They didn’t lose a single game at Dexter Park in 1934,” he said — though with future Hall of Famers Gibson at catcher, Charleston at first, Paige on the mound, Judy Johnson at third and Cool Papa Bell roaming the outfield, they didn’t lose a lot anywhere that year.

Simkus said the Bushwicks were a very strong professional team.

Simkus said the Bushwicks probably could be considered a Triple A-quality club. From boxscores he was able to collect, all Negro League teams had a record of 315-291-13 against their hosts in Dexter Park between 1918 and 1951, a .520 winning percentage.

“The Bushwicks were very good,” he wrote. “Now, the better Negro League teams, such as the Pittsburgh Crawfords, fared better in those head-to-head games.” He said the very best, the caliber of the Crawfords or Kansas City Monarchs, beat the Buswicks more than 70 percent of the time.

In Simkus’ research of more than 3,300 games, including those played by semipro teams from numerous major cities and towns, Negro League teams won just under 70 percent of the time against white teams.

“If you eliminate the Bushwicks from the semipro list, Negro League teams defeated white semipros 73 percent of the time (2,007-736) in my research.”