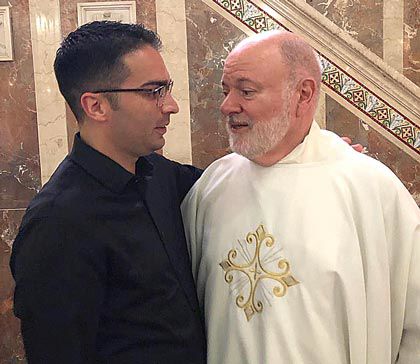 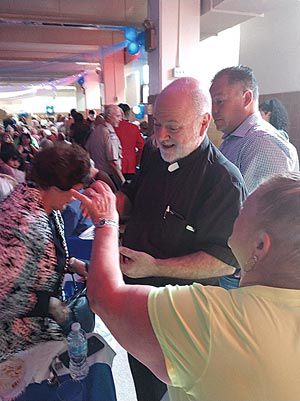 The Rev. Paul Palmiotto says goodbye after Sunday’s special Mass in his honor.

The Rev. Paul Palmiotto says goodbye after Sunday’s special Mass in his honor.

There just wasn’t enough room in Nativity of the Blessed Virgin Mary Roman Catholic Church last Sunday for all the parishioners who wanted to attend the final Mass given by the Rev. Paul Palmiotto before his retirement.

Latecomers had to perch on the front steps outside the Ozone Park church and listen to the service that echoed out the open doors.

The pastor of both Nativity and St. Stanislaus Bishop & Martyr Church officially retired last Monday, heading off after nearly 40 years in the priesthood to his new home in Florida.

But Sunday’s emotional Mass, interrupted at several points by standing ovations, was his final day in the pulpit.

“I don’t know how many people the church holds, but there had to be 800 people there,” said Councilman Eric Ulrich (R-Ozone Park), whose district office is around the corner from the church.

“It was a tremendous outpouring of love and respect,” he said.

Diagnosed earlier this year with amyotrophic lateral sclerosis, also known as Lou Gehrig’s disease, “Father Paul” spoke only briefly at the Mass, thanking the congregation for its support.

“The theme of most of my preaching was that Jesus loves us,” he told the Chronicle in an email. “No matter how many times you said it, it was worth repeating and reminding people.”

A lifelong resident of Queens, Father Palmiotto came to the Ozone Park parish in 2008 after serving more than 20 years as pastor of both St. Bonaventure and St. Benedict the Moor churches in Jamaica.

His arrival came shortly after Nativity and St. Stans were consolidated under a single pastor. It was a time when the diocese was combining churches and redrawing parish lines due to changing populations in Queens and a shortage of priests.

Father Palmiotto, who studied business at Queensborough Community College and sociology at Baruch College as young man, was, throughout his career, well-known for encouraging youngsters to consider careers in the priesthood.

The Rev. John Tino of Saint Benedict Joseph Labre in Richmond Hill has been assigned as the new pastor.

.i had difficulty swallowing and fatigue. I was given medications which helped but only for a short burst of time, then i decided to try alternative measures and began on ALS Formula treatment from Akanni herbal centre , It has made a tremendous difference for me (Visit www. akanniherbalcentre .com). I had improved walking balance, increased appetite, muscle strength, improved eyesight and others.