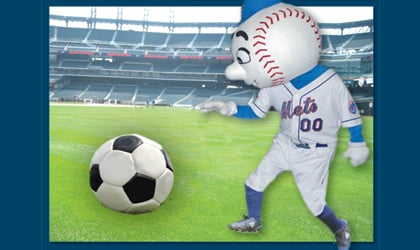 The New YorkMets have opened the door to potentially hosting MLS’ expansion franchise on their home turf, but the soccer league, its eye on Flushing Meadows Corona Park, says sharing a stadium is not an option. 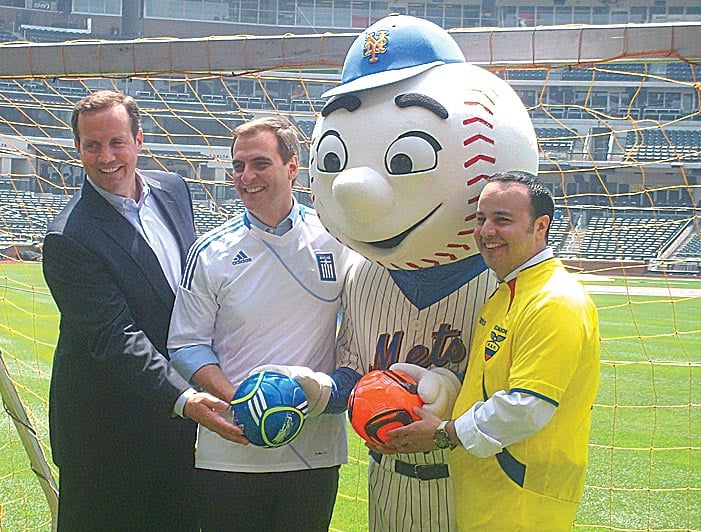 The New YorkMets have opened the door to potentially hosting MLS’ expansion franchise on their home turf, but the soccer league, its eye on Flushing Meadows Corona Park, says sharing a stadium is not an option.

The Mets’ home field has become the center of an ongoing debate over potential sites outside of Flushing Meadows Corona Park for the soccer league’s 20th franchise.

The suggestion was first made by Councilman Peter Vallone Jr. (D-Astoria), who said in a statement the Mets are "very interested and fully capable of handling an MLS franchise at Citi Field."

According to Dave Howard,  the team’s vice president of business operations, the Mets are offering an open door to a business partnership. Citi Field is ready for MLS’s use — if the right deal can be worked out.

“We would be interested,” Howard said. “The impetus is on them to approach us.”

MLS, however, is sticking by its current plan to build a 25,000-seat soccer stadium in Flushing Meadows Corona Park, at what is currently the Pool of Industry.

Citi Field is not an option, according to league spokeswoman Risa Heller.

Sharing space with the Mets is a “nonstarter,” she said in a statement.

The kerfuffle began when Vallone released a statement claiming the Mets were “very interested and fully capable” of hosting an MLS franchise at Citi Field.

“While I’m sure the MLS would prefer its own stadium, what’s most important is what works best for the people of Queens,” said Vallone. “This is a great way to have the best of both worlds in the world’s borough.”

MLS’s business model specifically avoids sharing space with other sports. The league strives for soccer-specific stadiums, sometimes newly built for its franchises. Of its 19 clubs, 15 play in stadiums designed or renovated to exclusively accommodate soccer matches. Sharing with a baseball team would be an uncharacteristic change.

The league’s practice is an intentional departure from the failed North American Soccer League, which in the late ‘60s to early ‘80s often shared homes with other sports leagues.

Citi Field’s potential as a soccer home has already been tested. It has hosted three soccer games since opening in April 2009; its first, a friendly match between Ecuador and Greece, happened on June 7, 2011.

MLS’s interest in a Queens franchise was only a rumor 20 months ago. At the time, Howard said the Mets were potential buyers, adding there would have to be a separate “soccer-specific” facility.

The Amazin’s have dropped their interest in owning the soccer franchise, Howard said in an interview on Tuesday. But the Ecuador-Greece match and two others that followed proved Citi Field has potential as a soccer home.

“Our experience holding the three international matches here shows this can be a world-class soccer venue,” he said.

The logistics of such an undertaking would be ironed out in the negotiating process, Howard added. Transforming Citi Field from a baseball park into a soccer pitch is an arduous 24-hour process which includes filling in the warning track with turf and dealing with inevitable post-soccer divots pock-marking the field.

None of that is a concern, Howard said. “We have one of the best directors of field operations in the business.”

The MLS and Major League Baseball schedules overlap, which could prove to be an additional scheduling headache. The Mets and MLS would have to work that out during negotiations, according to Howard.

But the soccer league won’t come knocking anytime soon, maintaining a steady focus on a plan it claims will bring 160 full-time jobs and $60 million in annual economic activity.

“A soccer stadium in Flushing Meadows-Corona Park is a win for soccer fans, a win for the Queens community and a win for economic development,” Heller said.

CLARIFICATION: An earlier version of this article overstated Vallone's characterization of the Mets' position towards MLS using Citi Field, calling it "exuberant."