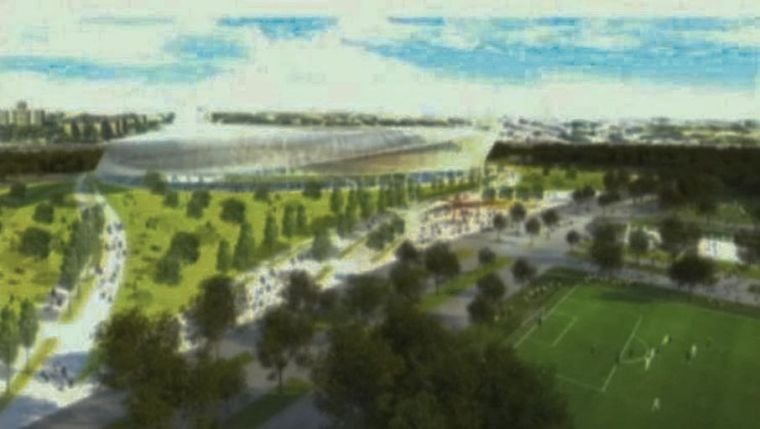 A rendering of a potential Major League Soccer stadium by SHoP Architects, a firm doing initial design study work but not guaranteed to be the brains behind the final proposal, leaked online. MLS said the renderings are not representative of the proposed stadium. 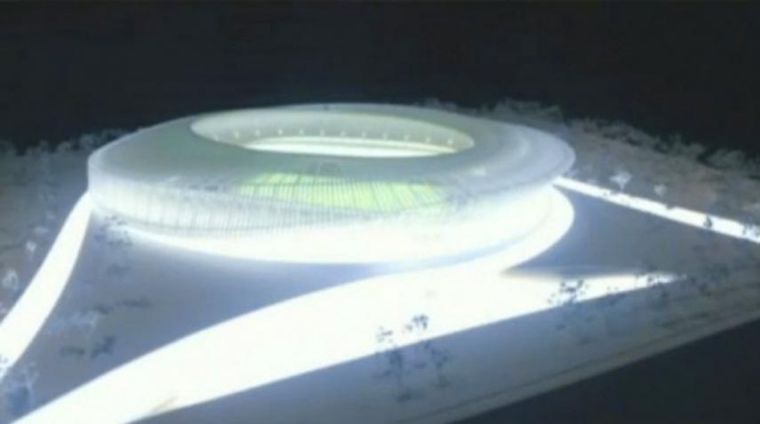 A negative of the soccer stadium rendering drawn up by SHoP Architects.

A rendering of a potential Major League Soccer stadium by SHoP Architects, a firm doing initial design study work but not guaranteed to be the brains behind the final proposal, leaked online. MLS said the renderings are not representative of the proposed stadium.

A negative of the soccer stadium rendering drawn up by SHoP Architects.

Queens got a peek this week at the potential Major League Soccer stadium planned for Flushing Meadows Corona Park.

A presentation by SHoP Architects’ principal Gregg Pasquarelli to students at Columbia University was posted on YouTube. It included images of an arena in what is clearly Flushing Meadows Corona Park, which found their way online.

The renderings quickly spread on the web, with many mistakenly pointing to them as MLS’s planned structures. But technically speaking, that design is a placeholder until the franchise’s owner hires its own architect, according to MLS President Mark Abbott.

“This was simply a concept drawing that was done only to help determine the potential height and footprint,” he said in a statement. “Any assertion that these drawings represent what a stadium will look like in Queens is wrong.”

SHoP is one of more than a handful of entities hired by MLS during the project’s early design phase, contracted to do assessments before it starts formally navigating the Uniform Land Use Review Procedure.

The architectural firm’s role in the process is simply to offer the scale of the proposed stadium. But its work with MLS so far offers no promise that it will actually design the final product.

“These drawings do not represent what the stadium will look like,” Abbott said in the statement. “In fact, we haven’t selected an architect yet and will not start the design process until we have an owner for the club.”

The renderings’ temporary status wasn’t enough to stymie the ire of various opposition groups, who have opposed the stadium proposal since its inception.

“This is a nightmare; now we know why MLS has been trying so hard to keep renderings of the stadium out of the public eye,” said Geoffrey Croft of Save Flushing Meadows Corona Park. “This is massive. The stadium represents the equivalent of parking three enormous aircraft carriers in the middle of a public park.”

The ongoing controversy over a soccer stadium in the park has died down somewhat, as MLS’s outreach efforts have slowed as the league approaches certification to initiate ULURP.

The league’s proposed $300 million, 25,000-seat stadium at the current site of the Pool of Industry would take up 10 to 13 acres of parkland, which MLS has promised to replace elsewhere.