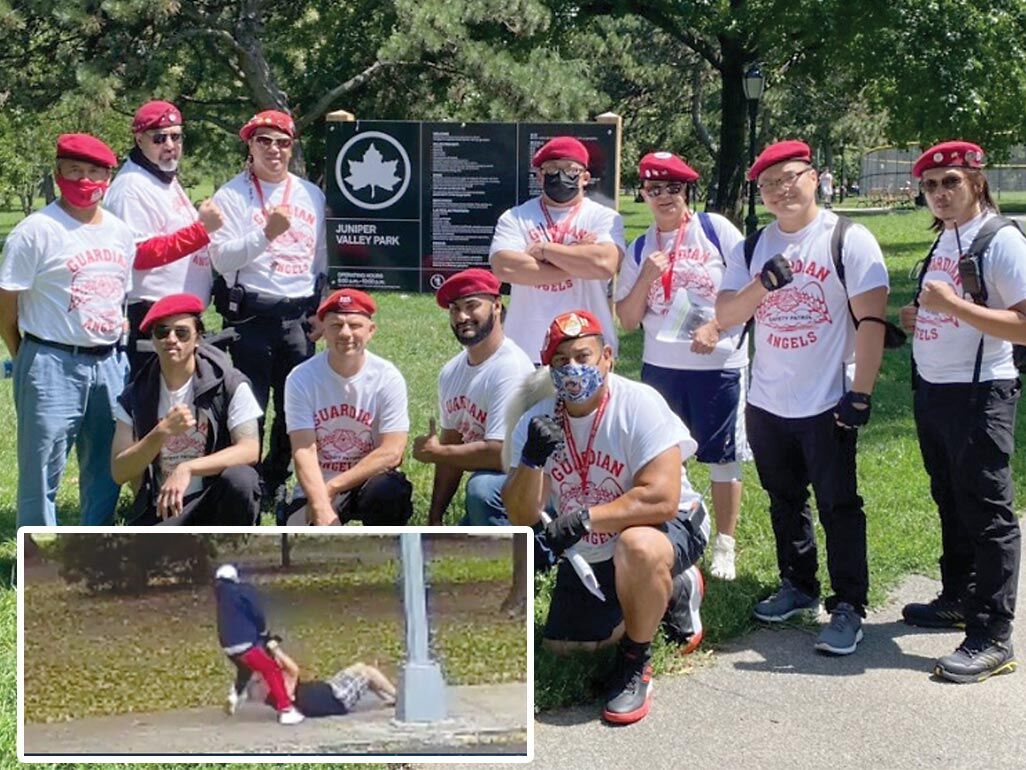 Members of the Guardian Angels, assembled at Juniper Valley Park, have begin patrolling in Middle Village in the wake of a brutal daylight assault and robbery on Oct. 13. 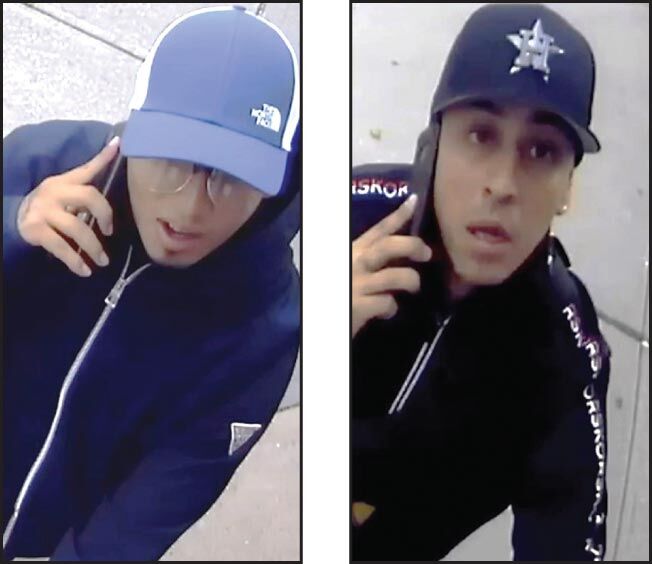 Police suspect the man above left of attacking a man in broad daylight in Middle Village on Oct. 13, while the other man is suspected of driving a maroon Ford Fusion that was used as the getaway vehicle.

Members of the Guardian Angels, assembled at Juniper Valley Park, have begin patrolling in Middle Village in the wake of a brutal daylight assault and robbery on Oct. 13.

Police suspect the man above left of attacking a man in broad daylight in Middle Village on Oct. 13, while the other man is suspected of driving a maroon Ford Fusion that was used as the getaway vehicle.

The NYPD is continuing its hunt for two suspects who teamed up to rob a man of $17,000 on a Middle Village street last Thursday.

And residents are getting some peace of mind in the presence of new patrols by the Guardian Angels.

Police said the 66-year-old victim was walking along 71st Street toward Juniper Valley Road when an unknown assailant came up from behind and pushed him to the sidewalk. The attack took place opposite 62-58 71 St. at about 1:20 p.m. The robber began punching and kicking the man while trying to wrest a bag from his possession.

A surveillance video released by police shows the attacker dragging the victim for more than 20 feet while continuing to kick and beat him in an attack that lasted less than 20 seconds.

He was eventually able to take the bag and flee on foot. Police said he got into a maroon Ford Fusion where a getaway driver was waiting. The car was last seen heading toward Eliot Avenue. The victim was treated at the scene by EMS personnel.

No arrests had been announced by police as of Wednesday afternoon.

Sliwa told the Chronicle that he spoke with Councilman Bob Holden (D-Maspeth) about the group’s plans.

“Robert Holden is a councilman who always tells constituents to call the cops,” Sliwa said in what could be taken as a none-too-veiled swipe at Councilmember Tiffany Cabán (D-Astoria) and Assemblyman Zohran Mamdani (D-Jackson Heights).

The two recently circulated literature in their districts encouraging residents to call 311 rather than 911 for many complaints involving the homeless or the mentally ill, or even attempt to engage them.

FDNY paramedic Alison Russo-Elling was stabbed to death in Astoria two days later, allegedly by a man known to be suffering from serious mental health issues.

Sliwa said Middle Village appears to have undergone some changes in recent years, sharing that he and Holden both believe the man was followed after he left a nearby bank.

“Which was an absolute disgrace,” he said. “My comment was, ‘My God!’ This guy was screaming. He was yelling. It was in the middle of the day. Nobody stopped to help. If this had happened five years ago in Middle Village, men would have gotten out of their cars. Everybody would be outside. This never would have happened. And now, unfortunately, in so many parts of the city the best they can offer is filming it. Live at five. No intervention ... It’s like everybody’s wearing blinders.”

Their founder said the Guardian Angels’ increased patrols are becoming more the norm than the exception.

A police canvas of the surrounding area in the 104th Precinct after the robbery turned up surveillance video that the NYPD says depicts the alleged robber and driver at Artis Drug and Surgical at 80-02 Eliot Ave. shortly before the crime occurred.

The suspected attacker is described by police as a male with a medium complexion with a medium build and short, dark hair. He was last seen wearing a dark-colored hooded jacket, multicolored Tommy Hilfiger sweatpants, white sneakers, a blue-and-white North Face baseball cap and glasses.

The alleged driver is described as a male with a medium complexion and medium build. He was last seen wearing a dark-colored jacket, dark-colored sweatpants, gray sneakers and a blue Houston Astros baseball cap.

All tips are strictly confidential.