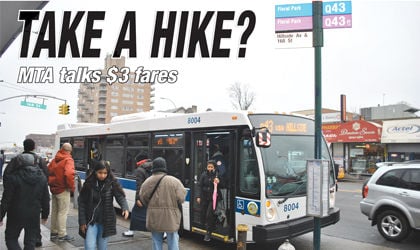 Money troubles at the Metropolitan Transportation Authority could have mass transit riders reaching deeper into their pockets with higher fares or no bonuses for MetroCard purchases over $6 come March if new sources of funding cannot be found. 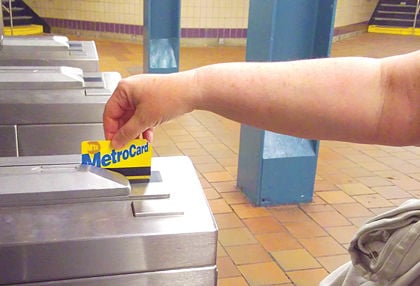 Money troubles at the Metropolitan Transportation Authority could have mass transit riders reaching deeper into their pockets with higher fares or no bonuses for MetroCard purchases over $6 come March if new sources of funding cannot be found.

The Metropolitan Transportation Authority last week released a budget plan that includes the option of a 25-cent increase in the cost of a MetroCard swipe — and still would not be enough on its own to offset staggering deficits in the next four years.

A second option, which would keep the basic bus and subway fare at $2.75, would eliminate the existing bonus for MetroCard purchases in excess of $6.

But both plans, released on Nov. 15, also forecast reductions in ridership, rider-generated revenue and service unless the MTA can identify a large and dependable revenue stream.

Both also call for increases in bridge and tunnel tolls

The projected budget — which will have to be voted on by the MTA’s board — calls for a bottom line of $15.5 billion for 2019, a figure which slides up to $16.4 billion in 2022. The Chronicle could not determine if the figure allows for any of the $19 billion NYC Transit Andy Byford is seeking for the first five years of his 10-year plan to rebuild the subway and bus systems.

But in a statement issued last week, the agency is projecting a drop of $1 billion in fare revenue by 2022, and a reduction in dedicated tax money to the tune of $580 million. MTA Chief Financial Officer Robert Foran estimated that the agency projects out-year deficits of $515 million in 2020, followed by deficits of $819 million and $991 million with funding remaining at a status quo.

“Without additional revenue in the near term, future options will be even more service reductions, reductions in staffing and/or fare and toll increases,” he said.

Fares last increased in 2015. The MTA is on a schedule on which it attempts to limit budget increases to 4 percent every two years.

Reaction to the proposals was swift and unmistakably clear last week at a rally of rider advocates and elected officials.

“The proposed 2019 fare hike is a slap in the face to every New Yorker who rides the subways and buses, many of whom struggle to pay a fare that’s already too high,” Assemblywoman Aravella Simotas (D-Astoria) said in a statement issued by the Fix the Subway Coalition. “But it’s not just about the money, it’s about asking people to pay more for lousy service, chronic delays, filthy stations and subway cars, and the abysmal lack of accessibility. We need to find a way to pay for mass transit that fixes the system and holds the MTA accountable for how it spends money, without picking the pockets of commuters.”

Marco Conner, deputy director at Transportation Alternatives, called for passage of congestion pricing legislation, which would charge drivers going into Midtown and Downtown Manhattan in a plan supporters claim would raise $1 billion per year for mass transit funding.

“With no end in sight to declining service, it’s imperative that Albany codify congestion pricing into their 2019 budget and guarantee predictable, sustainable funding for subway improvements, before any fare hike is approved.”

Leah Grandoit, a member of the NYPIRG Straphangers Campaign, agreed.

“Why should I be asked to pay more every few years to fund the subway when Albany refuses to do the same?” she asked.

“Transit affects every New Yorker and every New Yorker should fight for it,” said Felton Hou, a member of the Riders Alliance. “Seeing fares go up for little to no improvements in service is frustrating.

“As a lifelong transit rider who does not have a driver’s license, I depend on transit,” Ramos said. “I know how frustrating the subway and bus can be and how delays and unreliability can change our lives.”

“Like all New Yorkers, I am sick and tired of the problems we face with our subway,” Barnwell said. “Riders should not continue to pay increasing fares while services deteriorate.”

The Daily News reported that Gov. Cuomo, who appoints MTA leadership, opposed the increase during an appearance Monday on WNYC Radio’s “The Brian Lehrer Show.”

The News quoted the governor as saying that ongoing financial waste at the MTA must be addressed first; and that the Legislature should adopt a congestion pricing plan for Midtown and Lower Manhattan to create a stream of funding for the MTA.

The News reported that, upon being asked by Lehrer why the MTA is in such disarray after eight years under his stewardship, Cuomo reiterated his stance that he does not run the MTA, and has only six of the appointments to the board.

But the paper also quoted Cuomo as restating his belief that a new millionaire’s tax, cherished by Mayor de Blasio as an alternative to congestion pricing, lacks the support in Albany to be enacted.

Under both proposals, one-way tolls for the Whitestone, Throgs Neck and RFK/Triborough bridges and the Queens Midtown and Hugh L. Carey tunnels would increase from $8.50 to $9.50 for those paying tolls by mail; and increase from $5.76 to $5.99 or $6.22 for those using E-ZPass.

Fares for the Long Island Rail Road and Metro North also would increase under both plans.

The full budget proposals as well as a summary are available online at new.mta.info/fares-and-tolls. So too is information on public hearings outside of Queens; on registering to speak at a public hearing; and submitting written comments for the board’s consideration prior to a vote, likely in January.

That's the MTA in a nutshell: The ultimate creature of NYS, controlled by Cuomo. [smile]