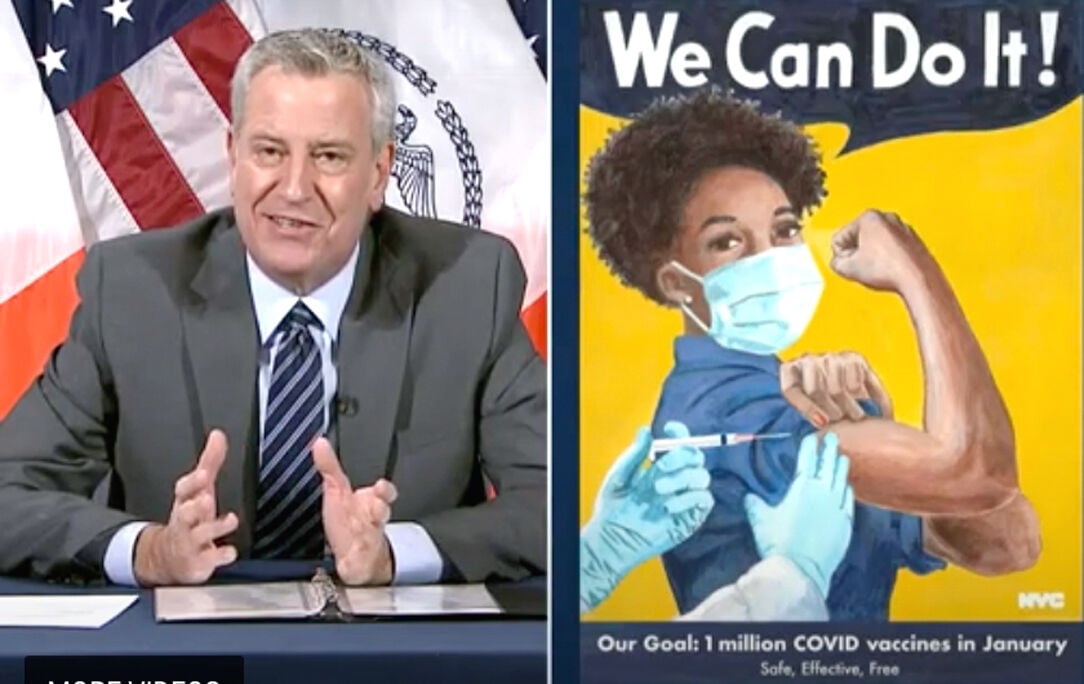 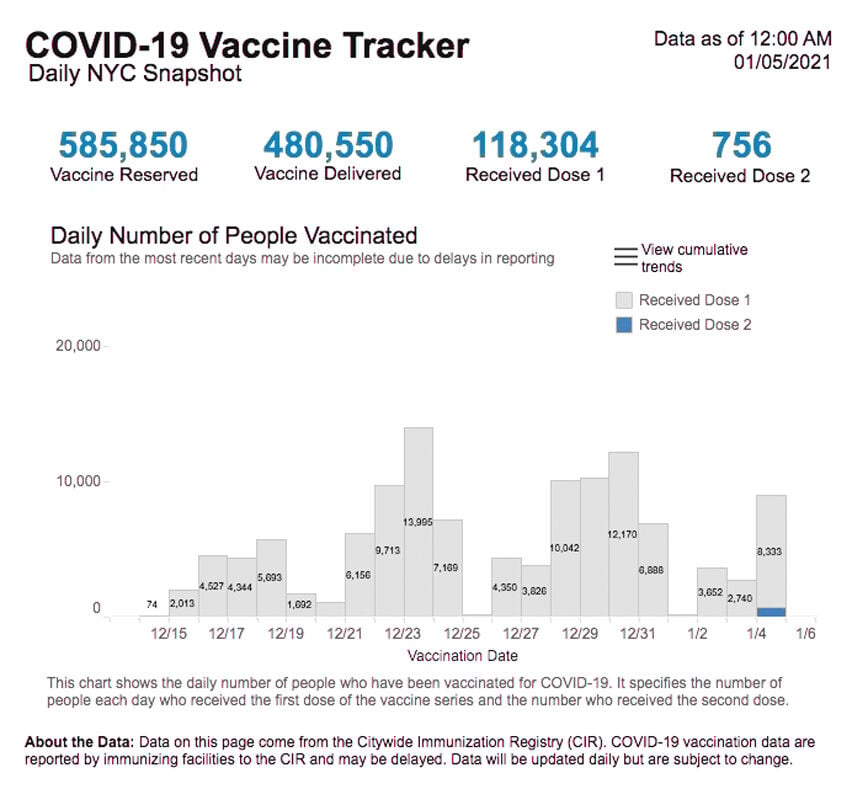 Vaccine data to date are available on one of the city’s Covid data pages.

Vaccine data to date are available on one of the city’s Covid data pages.

A Jamaica Hills high school will be transformed into a vaccination hub this weekend as part of Mayor de Blasio’s plan to inoculate 1 million New Yorkers by the end of the month.

Hillcrest High School, located at 160-05 Highland Ave., will administer doses to healthcare workers from 9 a.m. to 7 p.m. on Sunday. The site, as well as its counterpart Brooklyn and Bronx locations, is not open to the general public at this time. Additional dates and locations will be added soon.

The city introduced the vaccination hub concept Jan. 4, four days after de Blasio revealed his New Year’s resolution to administer shots to roughly one-eighth of the city population in January. The effort was off to a slow start — an average of 32,258 doses have to be administered a day to achieve the goal, but only 135 shots were given on Jan. 1 — but the city hopes the hubs, as well as other initiatives, will speed up the process.

“Why do we put down on this goal? Because we are convinced we need it and we can do it,” the mayor said Monday.

Nearly 14,873 people have been vaccinated since the first day of 2021 and another 690 have received their second, and final, dose, including RN Sandra Lindsay of Northwell Health, the first to be vaccinated in the country. De Blasio hopes to inoculate 100,000 total by the end of the week.

With 119,060 people vaccinated since Dec. 14, the city has used approximately a quarter of its supply. NYC also has 105,300 more vaccines in federal reserve.

The city has also opened two city Health Department Vaccine Clinics in Manhattan and five city Health + Hospital sites across Manhattan, Brooklyn and the Bronx. Officials plan to have 250 vaccination sites operating by the end of the month, which will utilize urgent care and community health centers.

“We want to keep expanding those categories. The more people that we can reach quickly, the better. The more options we have to spread out the effort and make sure that vaccinations happen where they’re most possible, the better off we will be. Remember: every single additional person who gets vaccinated — one more step towards defeating the coronavirus,” de Blasio said.

About 300,000 people across the state have received their first dose, at a rate of 1,539 per 100,000. The state had used about 32 percent of its vaccine stockpile as of Jan. 5, which Cuomo said is not a strong or fast enough distribution rate.

In an effort to speed up distribution, Cuomo threatened consequences for hospitals that do not dole out vaccinations within seven days of receiving allocations. Those that miss the deadline can be fined up to $100,000 and have their status as a vaccine distributor revoked. The state would then turn to other hospitals that are inoculating patients at a faster pace.

The 200 hospitals that are distributing vaccines across the state have only doled out 46 percent of the allocations they have received over the past three weeks, the governor said. Some have been operating at a consistently high pace, however, including the NewYork-Presbyterian system, which has administered 99 percent of its allocation. Nearby Nassau University Medical Center, by contrast, has only doled out 19 percent of its shots.

“If one hospital isn’t performing, we can use other hospitals and if you’re not performing this function, it does raise questions about the operating efficiency of the hospital. So, we are very serious about it,” Cuomo said.

The governor, who revealed he won’t take the vaccine until it is available to black, Hispanic and poor New Yorker communities, made the announcements hours before the mutated UK strain of the virus was detected in upstate Saratoga Springs. It has now been identified in 33 countries. Cuomo once again called on the federal government to mandate a test for all travelers from outside the U.S. in an effort to stall the new strain’s spread.

For more information on city vaccination sites and eligibility to receive one, visit on.nyc.gov/39iHRaz.

The state also launched an “Am I Eligible” app to help New Yorkers determine their eligibility, connect them with administration centers and schedule appointments. For more information, visit covid19vaccine.health.ny.gov.