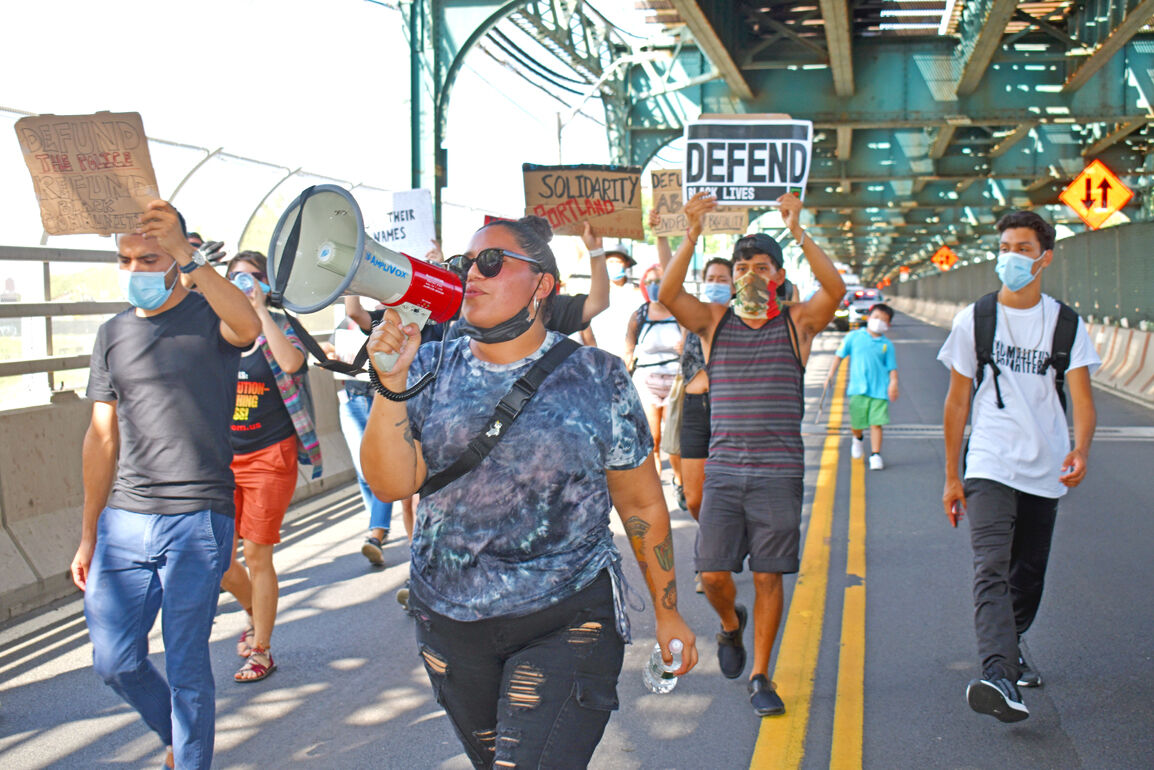 Protests throughout New York City have surpassed two months with demonstrators, such as NYC Injustice Fighters here in Flushing, claiming no real concrete action has been taken by the government to demilitarize or defund law enforcement. 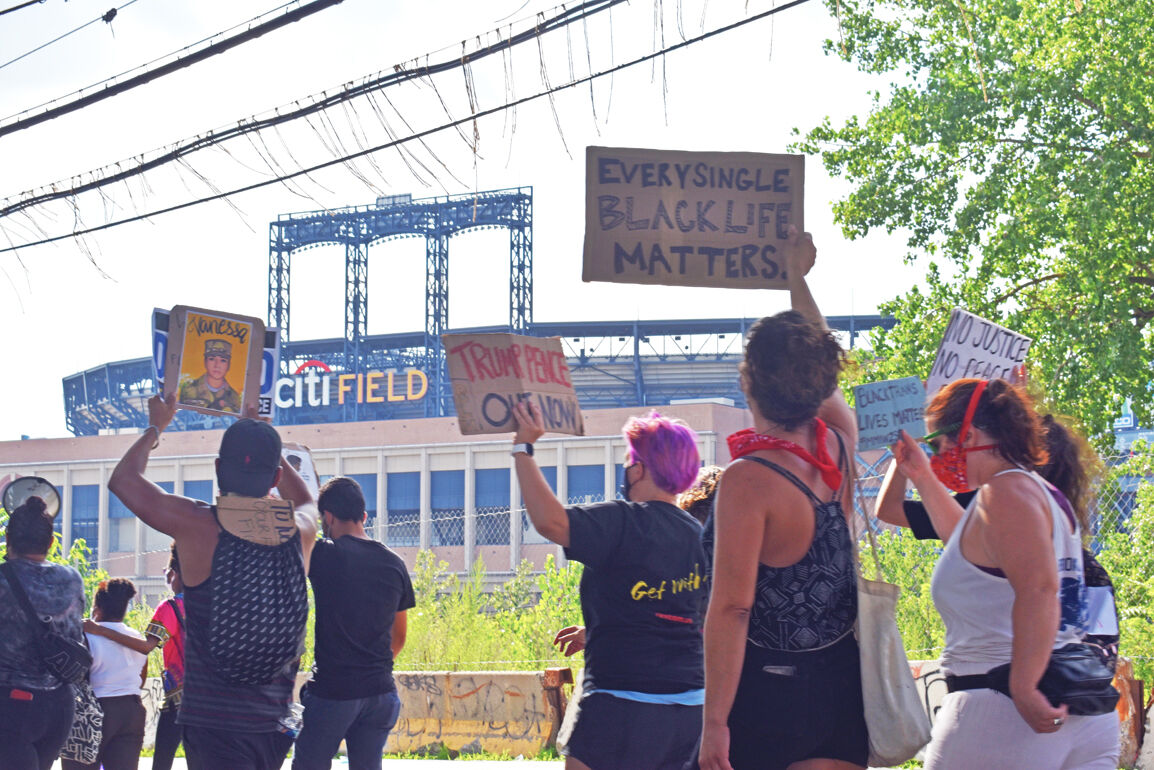 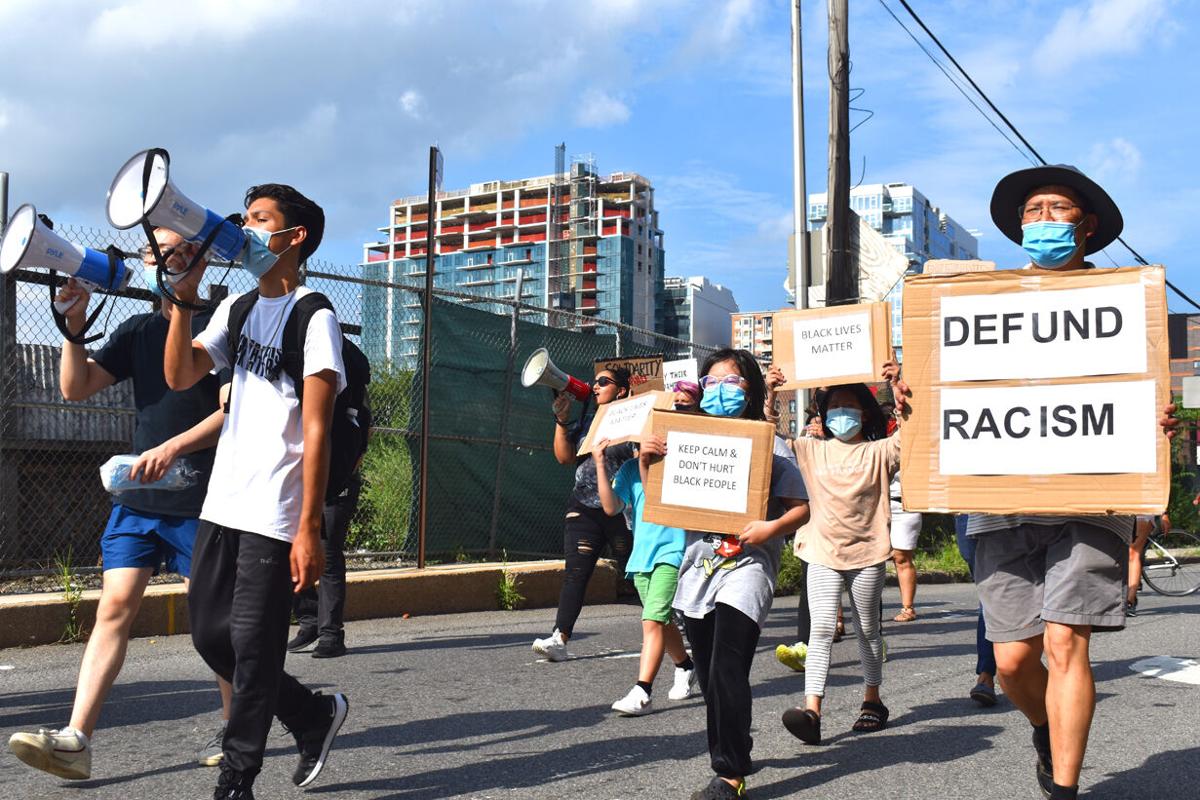 Protests throughout New York City have surpassed two months with demonstrators, such as NYC Injustice Fighters here in Flushing, claiming no real concrete action has been taken by the government to demilitarize or defund law enforcement.

One week after the mayor signed the NYPD accountability package into law, protesters in Flushing marched to defund and demilitarize the police, claiming the legislation is not nearly enough.

“It’s definitely mostly for appearance. It’s the same thing with the budget change where they moved $1 billion from the police but they didn’t do anything we asked for,” John Almonte, founder of the recently established NYC Injustice Fighters, said July 23. Almonte created the organization in an effort to increase Queens’ participation in the Black Lives Matter movement, which he said had been lacking compared to efforts in other areas of the city. “They were just trying to make it seem like they were doing good, but it’s definitely not done. As people have been saying, this is not a moment, it’s a movement.”

The NYPD accountability package included six measures aimed at cracking down on police misconduct. It included the criminalization of the use of chokeholds and other potentially deadly restraints by law enforcement as well as the requirement of officers to display their badge numbers while on the job.

The budget that was passed by the City Council on July 1 transferred $1 billion of the NYPD’s funding toward educational and social services, including the Summer Youth Employment Program that employs New Yorkers between the ages of 14 and 24.

Though protesters agreed both the legislation and the funding redistribution will make a positive impact on the community, they said the actions are skirting around what they’ve spent the last two months asking for.

“Even if it’s a year away, these protests make sure that we’re not giving up. Even if it takes a year to defund the police, it gives politicians an opportunity to see that people are still pissed off, even more pissed off because that budget deal was atrocious for a lot of protesters,” said Mobilize Middle Village member Manny Martinez. “[The package] doesn’t end qualified immunity, which [doesn’t allow] lawsuits to be brought up against police officers. And there’s a reason why people of color are more likely to be arrested for drug possession ... We could at least fully decriminalize all drug possession, instead of punishing people who need help ... We could do better, there’s a lot of things that hasn’t been fixed.”

The group of about 25 protesters traveled along Roosevelt Avenue from Main Street in Flushing to 103rd Street Plaza in Corona, where they met with a larger group and held a vigil for Breonna Taylor, a 26-year-old black emergency medical technician who was killed after three plainclothes Louisville, Ky. officers executing a no-knock search warrant entered her apartment on March 13 and shot her as she slept, and Vanessa Guillén, a 20-year-old Latina U.S. Army soldier at Fort Hood in Texas who was murdered after having been missing for over a month, before which she had reported being sexually harassed by an unnamed solider.

One marcher, a young white woman named Kristen McManus, had participated in the Bayside march almost two weeks earlier, where she was slapped across the face by a Back the Blue supporter. Despite being surrounded by 111th Precinct officers when she was assaulted, an action that was caught on video, the perpetrator was not detained or punished and was allowed to participate in the pro-police rally.

“It just gives me more of a reason to come out and fight because the police won’t do their job in protecting me the same way they don’t do their job to protect black people in America,” she said. “Maybe what happened to me can show other white people what they’re not getting when they hear stories ... about the violence at protests that black protesters are experiencing. That maybe when they see a white person experiencing it, it may change their mind.”

Protesters rallied outside the 111th Precinct July 26 to call the officers to action to punish McManus’ assaulter. Printed pictures of the older white man were pasted across posters that said, “Is it okay to assault another human being if I’m wearing an NYPD shirt? Asking for a ‘friend.’”