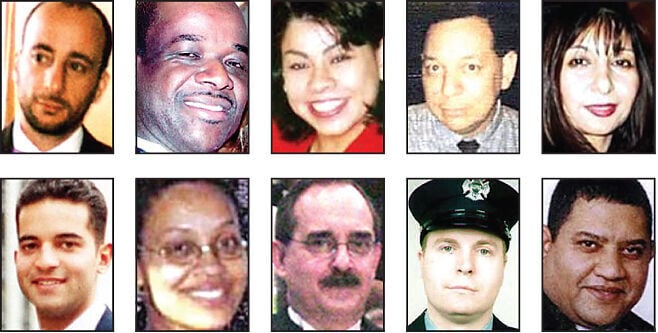 Friends of Maple Grove Cemetery in Kew Gardens will pay tribute to an eclectic group of people on Sept. 11.

Some were born in New York City while some came from as far away as the Caribbean and South America. They lived from New Jersey to Suffolk County, and they included a financial analyst who was a world-class cricket player and a guitar player who wanted nothing more than to become a New York City firefighter.

All showed up for work at the World Trace Center 20 years ago on Sept. 11 and were killed in the attack on the Twin Towers. All now rest in Maple Grove.

Bunin, 45, was a Queens resident and computer systems administrator with Cantor Fitzgerald. The financial firm occupied five floors in the North Tower, and lost 658 of 960 employees in the building that day. He was an active member of his Seventh-day Adventist Church in Queens.

Dawson, 47, lived in Jamaica and was a native of the British Virgin Islands. He served as a computer network administrator at Euro Brokers, which lost 61 people, or about 20 percent of its staff, in the North Tower. Dawson was married with one child.

A Suffolk County resident, De La Pe–a, 32, worked at Fiduciary Trust International. The firm and its sister company Franklin Templeton lost 97 people. She was married with one child.

Jorge Luis Morron Garcia, 38, was a resident of New York City. He was employed as a security officer with Summit Security Services.

Girolamo, 41, lived in New York City and worked for Aon Corp., an insurance and risk management firm, at the time of her death. Nearly 180 Aon employees were killed in the Sept. 11 attacks.

A Queens resident, Gomes was an officer at Fiduciary Trust International. Various biographies said he was a fan of music, sports, math and New York City’s cultural offerings. Gomes was married with one child at the time of his death.

The attacks claimed 343 New York City firefighters, including Guadalupe, 37. The 10-year FDNY veteran lived in Rochdale Village in Jamaica. He was one of four members of Engine Co. 54 in Manhattan who would never return home. Guadalupe also served the neighborhood’s youth as a mentor or just by encouraging teens to take their studies seriously and not hang out using their time unproductively.

Henry, 49, was one of two men from Manhattan’s Ladder 24 to die in the South Tower. He was a New York City resident. He was an athlete, and a frequent traveler who enjoyed home fix-up projects.

Hetzel, 33, was one of five members of Manhattan’s Ladder Co. 13 to perish in the towers. The Elmont, LI, resident left behind a wife and daughter. He had been with the FDNY for six years and a volunteer firefighter in Nassau County for 15.

Kearney-Griffin, 35, of Jamaica was married with two daughters. She worked with American Express Corporate Travel at Marsh & McLennan’s office. She enjoyed traveling.

Khan, 29, was a Long Island native and New York City resident. He perfected many BMX moves on his bicycle as a child before becoming a high school football player. The commodity futures trader was one of 69 employees of Carr Futures who were killed.

Martinez, 33, of New York City, was an accounts manager at Cantor Fitzgerald. She and her children enjoyed things like arts and crafts, apple and pumpkin picking and similar activities, particularly around the holidays.

Motroni, 56, was a broker and trader at Carr Futures. A website established by his family said the native of Cuba, a talented musician, athlete and businessman, came to the United States with a dream “and became everything.”

The Kew Gardens native and Forest Hills High School graduate was a talented musician and songwriter, even leading a few bands. But his heart was set in being a firefighter since childhood. He charged into the South Tower minutes before it collapsed, giving his life with three others from with Brooklyn’s Engine Co. 201.

After his death at age 45, Ramsaroop’s family said when he emigrated to New York city from his native Trinidad, he was so impressed with the World Trade Center that he knew he wanted to work there. He shortly secured a job there, and was working in custodial and maintenance work with ABM Industries when he was killed. He left behind his wife and eight children and stepchildren.

Rauzi, 42, an employee of the state Department of Taxation and Finance, was a New York City resident. A cousin told a Pennsylvania newspaper last year that at a memorial service, one of Rauzi’s former co-workers said Rauzi put him into a crowded elevator on Sept. 11, saying that he would catch the next one, which would never arrive.

Sewnarine, 37, of New York City, was a native of Guyana. She worked as a disaster recovery agent for the Fiduciary Trust International Co. Sewnarine was devoted to her church, the Pentecostal Bethlehem Church of God, and left a young daughter.

Felix Vale, 29, lived in East New York with his mother, whom he supported with his job as a manager at Cantor Fitzgerald. He helped his brother Ivan, 27, get a job at the Cantor company eSpeed. A published report said Ivan had survived a round of layoffs the day before. Ivan had been married for three years.

Young, 35, of Laurelton, managed the telecommunications systems for Euro Brokers and was working on the 84th floor of the South Tower on Sept. 11. A published report said his wife, who worked in Garden City and had a clear view of the towers, saw both the flash of the second plane hitting and the collapse of the building.

Further information on the Sept. 11 tribute, a virtual event set for 4 p.m. Saturday, is posted on the Friends of Maple Grove Cemetery’s Facebook page.