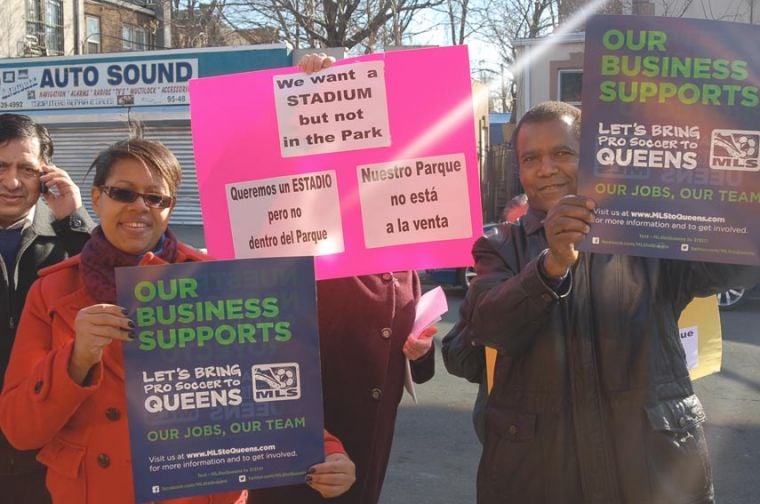 Two sides of the professional soccer stadium proposed for Flushing Meadows Park gather during a press conference on Friday. 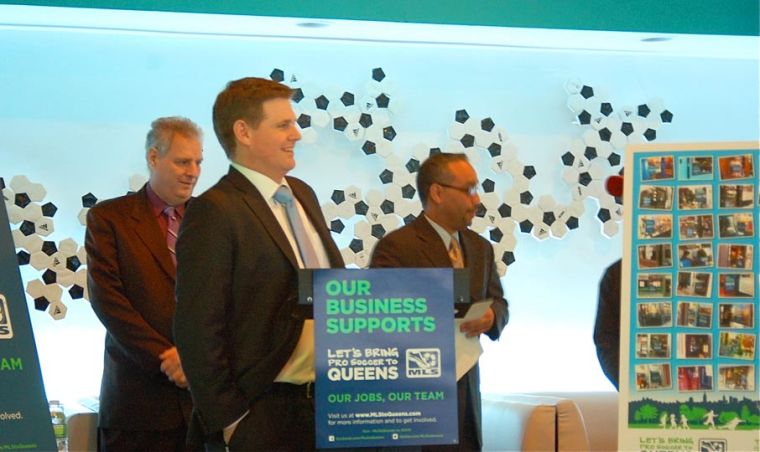 Two sides of the professional soccer stadium proposed for Flushing Meadows Park gather during a press conference on Friday.

Outside the MLS press conference, a handful of protesters from Make the Road New York and the Fairness Coalition of Queens, two organizations that do not want green space taken from the park, held signs saying “We want a stadium, but not in the park” and “Our park is not for sale” in English and Spanish.

There were also individuals waving signs saying “Let’s bring pro soccer to Queens.” Those people would not speak directly to the press, but pointed to an MLS spokesman.

The pro-stadium signs are being displayed by businesses in the neighborhoods surrounding the park including Sabor Latino and two salons, Sapna Gandhi and Unisex Salon, all three located on 40th Road in Jackson Heights.

According to MLS, 1,000 small business owners have signed a letter of support for the 25,000-seat stadium at what is currently the Pool of Industry. The signatures are “primarily” from Queens businesses, “primarily in Flushing and Corona,” according to Brett Lashbrook of MLS.

“We have seen at stadiums nationally that soccer fans take part in the fabric of the community,” Lashbrook said. “They shop, eat and drink there.”

“As business people you know a good deal,” state Sen. Jose Peralta (D-East Elmhurst) said, adding he plans to continue to hold MLS’s “feet to the fire” about promises the organization has made including replacing parkland and revamping soccer fields in the park.

“[In] places like Harrison, New Jersey, everything they have said they’ve done,” Queens Chamber of Commerce Executive Director Jack Friedman said, referring to a town where MLS recently opened a soccer stadium.

Michael Battinos, owner of Battinos, a men’s clothing store on Junction Boulevard for 30 years, said the press conference was the first time he heard about the plan.

“I think this would be a good thing as long as they are giving back. In my opinion it’s a good thing,” Battinos said.

The press conference was attended mostly by the media, MLS employees, politicians and a handful of business owners.

“It is the perfect time to build a stadium. The fan base is here, there’s tremendous access to public transportation and it will be a tremendous boost to the neighborhood and the city as a whole,” said John Ferreira, owner of Casa de Ropa on Junction Boulevard in Corona and president of the Junction Boulevard Merchants Association.

The other two business owners who spoke were the manager of Sabor Latino, Juan Inga, and Mike Proano, manager of F. Ottomanelli Burgers and Belgian Fries in Woodside, a neighborhood that does not abut the park.

Unfortunately taking land away from our residents is not the way go. Sports arena's never offer full time work, as the soccer season is only so long, and what about away games? how will the community stay employed.

I would like to see the proposal and employment plan from the MLS.