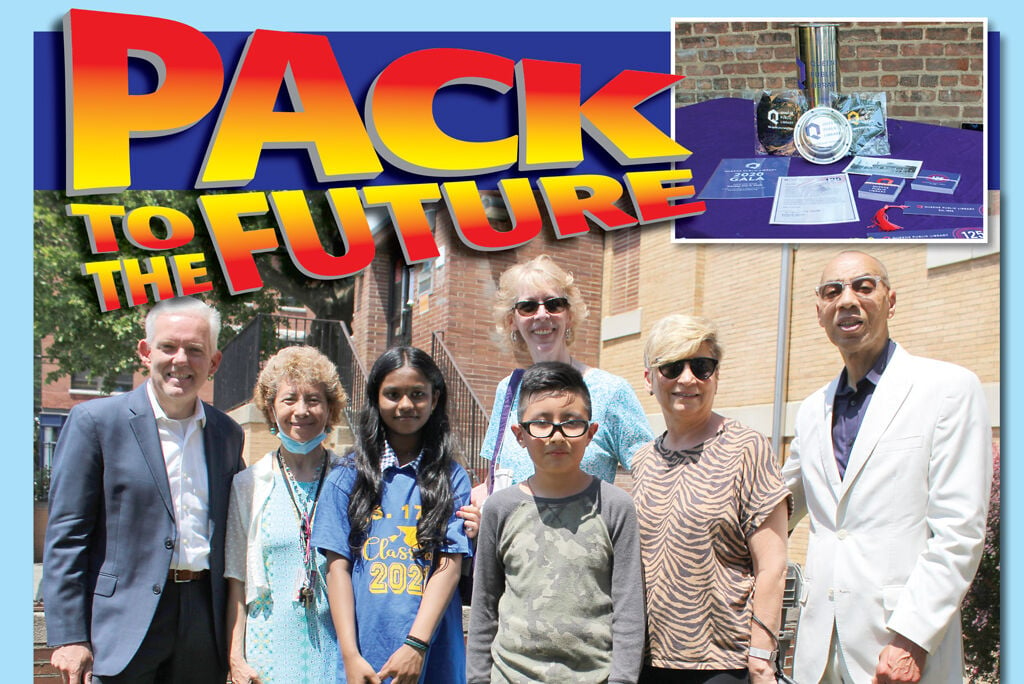 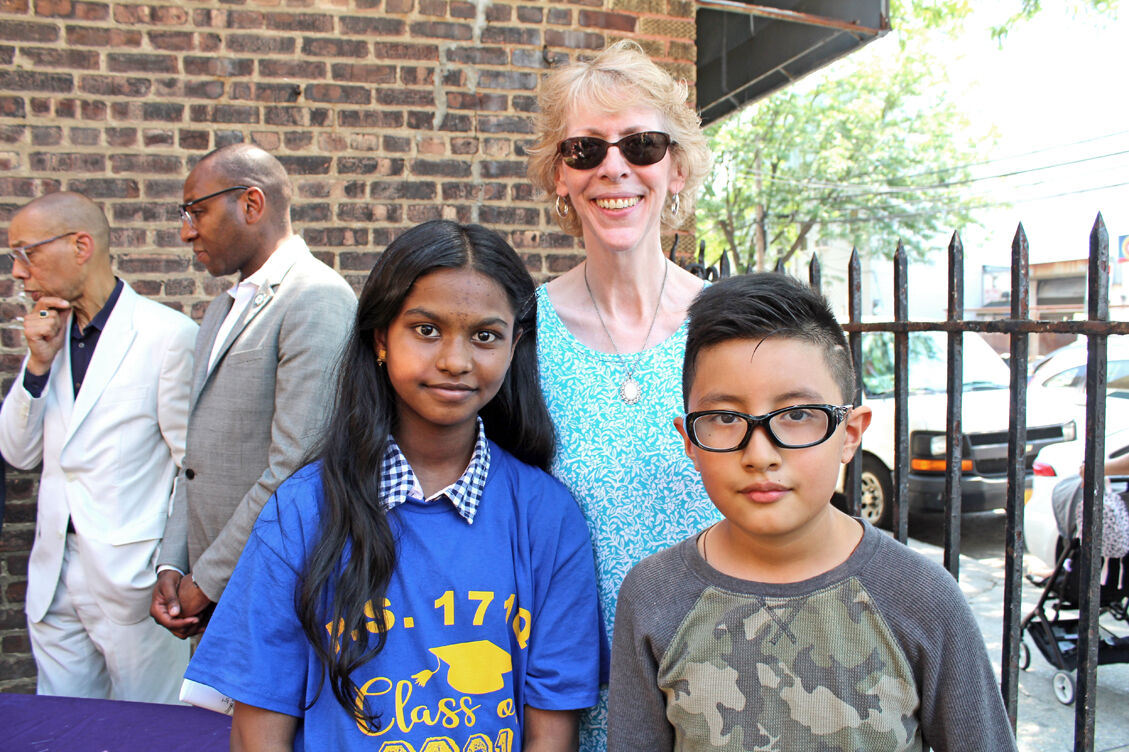 PS 171 fifth-grade Salutatorians Tasniha Islam, left, and Willian Lema are joined by their principal, Lisa Stone, at the Astoria Library time capsule burial, where the youngsters read their hopes for the year 2046. At rear are Queens Library President and CEO Dennis Walcott, left, and Borough President Donovan Richards. 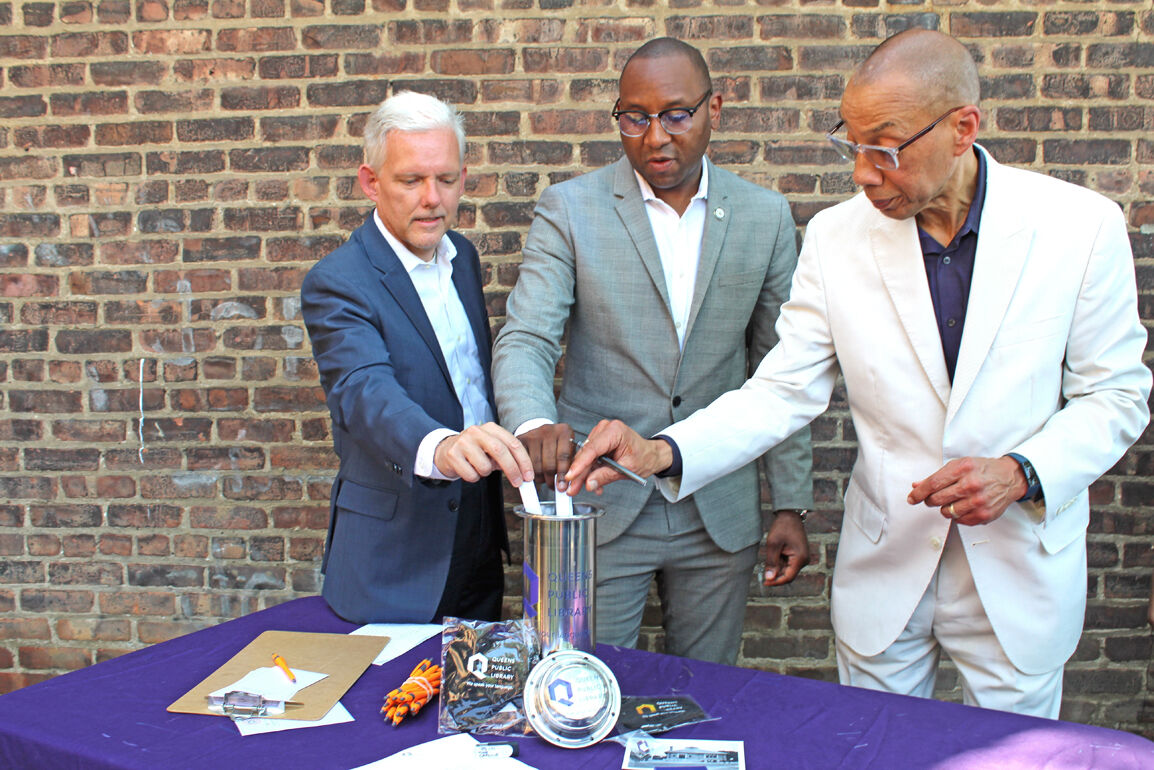 City Councilman Jimmy Van Bramer, Richards and Walcott put their wishes for 2046 in the time capsule.

PS 171 fifth-grade Salutatorians Tasniha Islam, left, and Willian Lema are joined by their principal, Lisa Stone, at the Astoria Library time capsule burial, where the youngsters read their hopes for the year 2046. At rear are Queens Library President and CEO Dennis Walcott, left, and Borough President Donovan Richards.

City Councilman Jimmy Van Bramer, Richards and Walcott put their wishes for 2046 in the time capsule.

“Life in 25 years will be great. First, scientists can make a cure for every type of cancer. Second, robots will do most of the things like cook, do chores and help you so you can do things that you love — like visit your family or watch TV.”

Or maybe, read a book.

There is a lot to look forward to in 25 years, according to Willian Lema, a fifth-grader from PS 171 in Long Island City, who is one of the salutatorians of his graduating class. Also in 25 years will be the unearthing of a time capsule he helped bury on Monday to commemorate the 125th anniversary of the Queens Public Library.

Inside the capsule were handwritten wishes for the year 2046 as well as Queens Library pins, bookmarks, a QPL mask, an invitation to the 125th gala celebration, which was on Tuesday, and blueprints of current construction projects.

Walcott promised a “major infusion of infrastructure” and hinted at upcoming surprises to also mark the anniversary. “This branch will undergo several important renovations, improving accessibility and making other improvements so that it can serve the community for many years to come,” he said.

Richards added that “millions” of dollars will go to the libraries, including for expansions. Additionally, he declared June 7, 2021 Queens Public Library Day.

Richards and Van Bramer are running against each other in the Democratic primary for Queens borough president but put aside their differences to share their love of the libraries.

“Political seasons and moments come and go but the thing that always remains is our joint commitment to these institutions,” said Van Bramer.

“In 25 years, I hope to still live in the greatest borough with the best people and the best public library system in the world,” he read from his note before he stuck it in the capsule.

Van Bramer is chairman of the City Council’s Cultural Affairs, Libraries and International Intergroup Relations Committee, and he served as chief external affairs officer for the Queens Library from 1999 to 2009.

Though the first library in Queens was founded in Flushing in 1858 and was subscription-based, other local library services followed and in 1896, the first multibranch system was formed with the consolidation of the Long Island City, Steinway and Astoria libraries.

In the early 1900s, Andrew Carnegie donated $240,000 to build libraries in the most populated neighborhoods, four of which are still in use, including the Astoria location that hosted Monday’s event.

“We will be modernizing this building in the next year and a half or so and maintaining the Carnegie presence of this building,” said Walcott.

Today, the Queens Library is among the top 25 largest library systems in the country and the top 10 public libraries, according to the American Library Association.

“I want to thank the Queens Library for opening their doors. Books and libraries certainly helped our students escape, kept them up to date with school and more importantly, made us feel less alone,” Richards said.

Marie Torniali, chairperson of Queens Community Board 1 in Astoria, said she remembers the local library being a “lifesaver” for her when she immigrated to the United States with her family from France at 7 years old.

“It gave me the opportunity to be part of a larger community,” said Torniali. “I don’t think Queens would be the same without the Queens Library.”

Her daughter went on to work for the library and now Torniali takes her grandson there. “I want my grandson to be here when the capsule is opened,” she said.

For Van Bramer, working in leadership for the Queens Library taught him the importance of supporting nonprofits.

“We as elected officials have an obligation to use tax dollars wisely. Investing them in the Queen’s public library, for example, is one of the best things you can do, because this serves everyone,” said Van Bramer.

“It educates children and advances their careers but it’s just one of the rare institutions that’s open, free, accessible to every single person in the borough, no questions asked.”

Twenty-five years from now, PS 171 student Tasniha may prove how the Queens Public Library system helped propel her career. First, she says, she dreams of becoming an astronomer and sending a satellite to outer space.

“I see myself having graduated college and having a successful job as an astronomer,” she said. “The second thing is to publish a best-selling book.”

We can’t wait to read it, Tasniha!