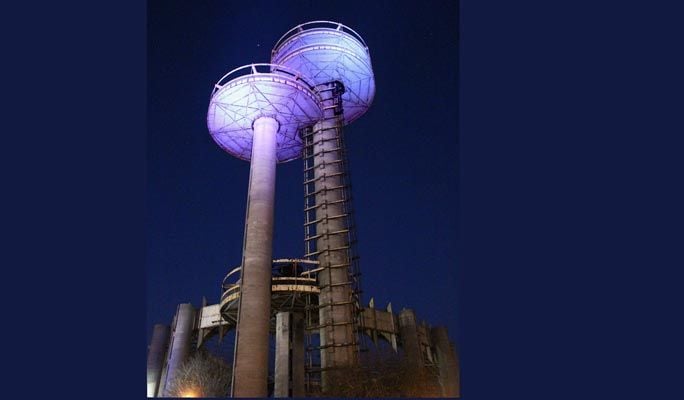 Borough President Melinda Katz was on hand Tuesday night to watch lighting experts work on the best ways to ighlight the 50-year-old relic from the World’s Fair at Flushing Meadows. 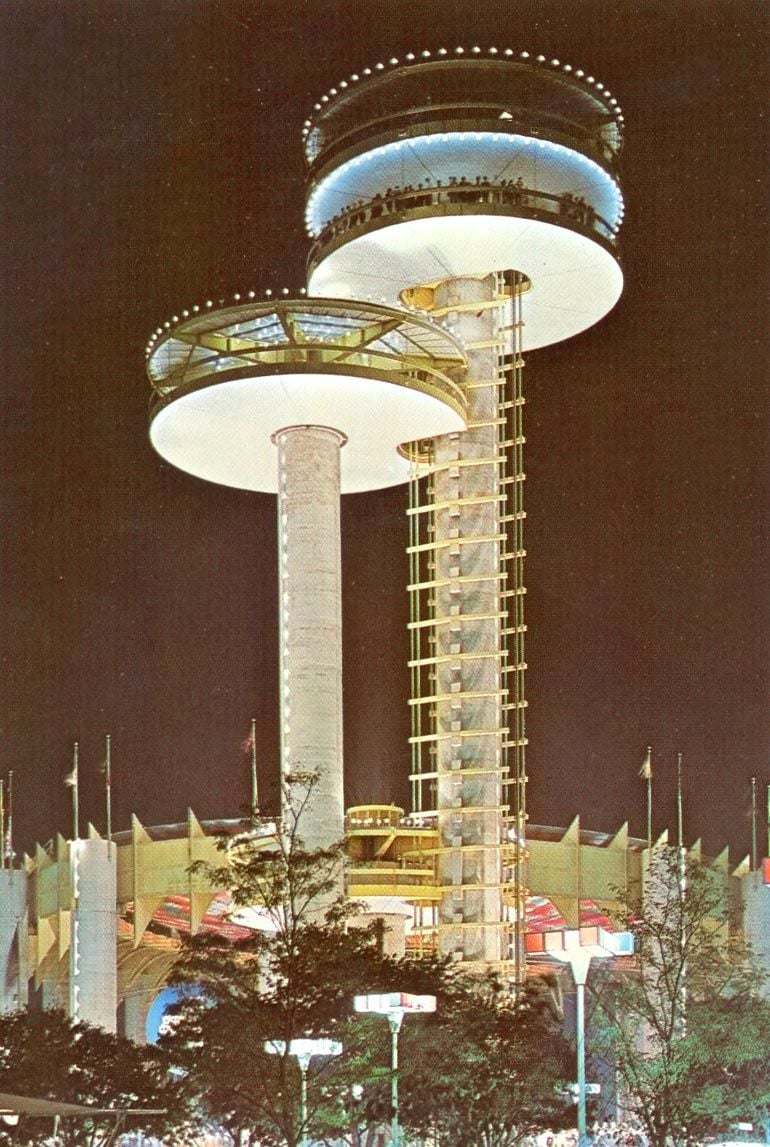 The New York State Pavilion as it looked at night during the 1964-65 World’s Fair at Flushing Meadows.

Borough President Melinda Katz was on hand Tuesday night to watch lighting experts work on the best ways to ighlight the 50-year-old relic from the World’s Fair at Flushing Meadows.

The New York State Pavilion as it looked at night during the 1964-65 World’s Fair at Flushing Meadows.

It was deja vu Tuesday night at the New York State Pavilion as two of its tallest 50-year-old towers were temporarily lit once again.

Borough President Melinda Katz and other officials were on hand to watch the second test run to illuminate the rusting structures, one of which, at 226 feet, was the tallest feature of the 1964-65 World’s Fair at Flushing Meadows.

After taking office last year, Katz vowed to preserve the pavilion, which also includes the circular Tent of Tomorrow and the Theaterama, later converted to the Queens Theatre.

“The New York State Pavilion is an architectural marvel that was a major attraction at the 1964-65 World’s Fair, one of the most important events in our borough’s history,” Katz said last year. “Today this structure continues to be an awe-inspiring icon for both Queens residents and our many visitors.

“Given all that, I say we should do what it takes to make sure the pavilion remains standing,” she added.

Katz hopes to have the pavilion permanently lit sometime later this year and is seeking additional funds in her latest budget to help restore the site. Last year, the city budgeted $5.8 million to start fixing it up.

Different methods of illumination have been tried, such as utilizing LED lights from the ground and from the Queens Theatre roof in red, green and blue colors. Workers added a second light fixture on the ground Tuesday.

During the fair, the pavilion was lit with white lights around the observation decks of the three towers and bases.

John Piro, who founded the Paint Project, a volunteer group that keeps the pavilion cleaned up, said he is excited about lighting the towers. “I would like to see white lights like at the fair, otherwise it’s too gaudy,” Piro said.

Lighting designer Brian Belluomino of Shimstone Lighting Design said Tuesday night that he wants the new lights to have the least amount of intrusion in the park, adding that work will continue on how to best light the facility. The NY Landmarks Conservancy is acting as an advisor.

Meanwhile, Piro is hoping to get permission this year to start cleaning out a couple of the rooms in the Tent of Tomorrow, which are now used for storage. During the fair the rooms held a restaurant, a cafeteria and a fashion exhibit, among other things.

But as the city goes ahead with restoration plans, vandals have once again illegally entered the pavilion and on March 15 got to the top of one of the towers, adding graffiti along the way.

Flushing Meadows advocates have been calling for years for a greater police presence, and in her latest budget requests, Katz is seeking funds to create a police substation there.

Geoffrey Croft, founder of the website A Walk in the Park, which delves into city park issues, broke the story on the trespassers and told the Chronicle that it is a perfect example of why more patrols are needed in the park.

“There is a hole in the fence that has been there for years,” Croft said. “It just happened that two Park Enforcement Patrol officers saw the five teens on the observation deck of one of the towers.”

He noted the perilous conditions there because of the rotted stairs, adding, “It is extremely dangerous in its present condition. The views are breathtaking, but they are not worth losing your life over.

“We are very much looking forward to the city commencing its work on stabilizing the stairs and eventually restoring the iconic towers for future generations, which is long overdue,” Croft added.

Two of the teens, carrying graffiti materials, were arrested.

In other pavilion news, teacher Matthew Silva’s movie “Modern Ruin,” about the pavilion, will be shown for the first time on May 22 at 7 p.m. at the Queens Theatre.

Let there be light; pavilion illuminated