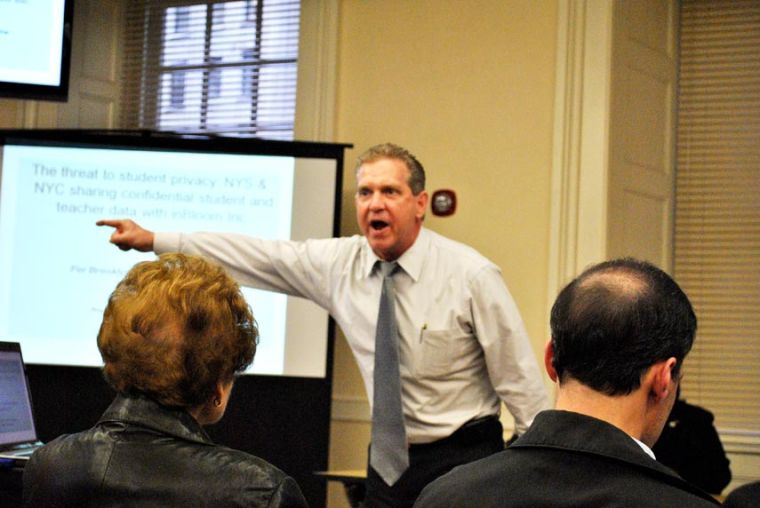 Joseph Blythe, a member of the Parent Teacher Association at PS 49 in Middle Village, rails against a plan to have detailed student information managed online by inBloom, a private nonprofit group. 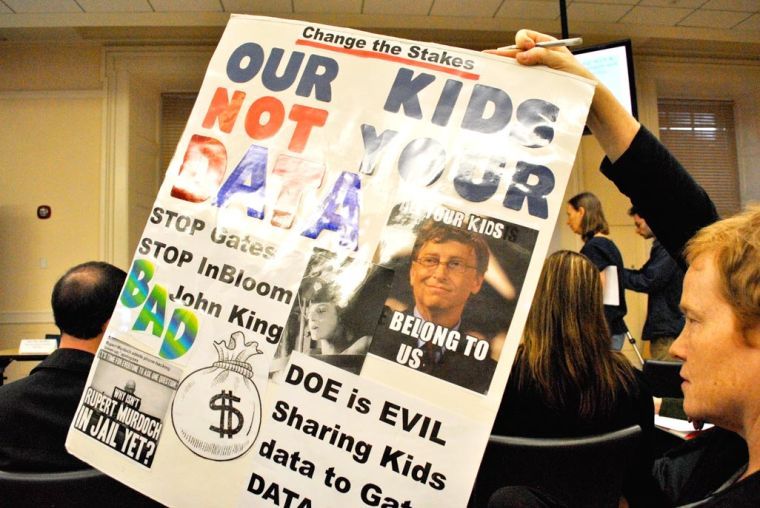 A concerned parent holds up a sign protesting the State’s newest data system, inBloom, at a town hall meeting hosted by Class Size Matters at Brooklyn Borough Hall. Parent’s say they should have the right to opt out of the data “cloud.”

Joseph Blythe, a member of the Parent Teacher Association at PS 49 in Middle Village, rails against a plan to have detailed student information managed online by inBloom, a private nonprofit group.

A concerned parent holds up a sign protesting the State’s newest data system, inBloom, at a town hall meeting hosted by Class Size Matters at Brooklyn Borough Hall. Parent’s say they should have the right to opt out of the data “cloud.”

The parents at CEC 24 meeting in Middle Village last Tuesday were furious.

A presentation made by the activist group Class Size Matters informed them that New York State is planning to share their children’s confidential information with private corporations.

“There is no way this is legal,” one parent said. “I don’t want my kid’s information out there for any business to see.”

The company they are referring to is inBloom Inc., a nonprofit organization adopting New York as one of seven pilot states for its data software program.

The private organization, funded by the Bill and Melinda Gates Foundation, describes itself as a “provider of technology services that allow states and public school districts to better integrate student data and third-party applications to support sustainable, cost-effective personalized learning.”

In layman’s terms: inBloom will provide the state with the technology to store student data in one central Education Data Portal or “cloud.”

The reasons for centralizing the data are complex.

The DOE has said inBloom offers a more efficient way of storing and utilizing student information as teachers and school administrators may have to go into several databases to get student names, addresses, and test scores.

Another reason a central EDP is being implemented is because of the federal grant contest known as Race to the Top, which was created to “spur innovation” and reforms in state and local district K-12 education. The contest began in 2009, though New York State wasn’t added to the list of finalists until 2011. States that meet a series of requirements are awarded funds for education.

According to the New York State Education Department, the RTTT award “requires NYSED to provide a single sign-on portal that allows authorized educators, students (grades 6 through 12), and their families (all grade levels) to log in and view student educational data through data dashboards or online tools that display student demographic, enrollment, program participation and achievement scores.”

Those “data dashboards” will be used to detect early warning indicators, graphical display or student mastery of Common Core standards and recommendations for relevant curriculum or instructional content and resources.

In order to implement the EDP, the NYSED has entered into a legal agreement with inBloom to provide many of the underlying services upon which the EDP will rely.

A comparable example is GPS. There are hundreds of applications, software programs, phones, computers and other devices that utilize GPS, yet each time one of those devices or programs is created no one needs to re-invent GPS.

Basically, inBloom acts as a “GPS” of sorts for the schools.

However, because of inBloom’s association with Wireless Generation (a subsidiary of News Corp., owned by Rupert Murdoch), Amazon and other groups, many people are worried the information that will — and in most cases, has already begun to — be transferred to inBloom will result in their child’s confidential data being sold to corporations.

Class Size Matters Director Leonie Haimson has been at the forefront of the “anti-inBloom” movement.

She said, “inBloom is collecting confidential information in at least eight states right now. This is the most radical violation of privacy in recent history and yet the people behind this seem totally indifferent.”

An inBloom spokesperson responded to Haimson’s claims by laying out the fact that the data has and will continue to be in control of the state.

“States and districts using inBloom retain ownership and control of their data, and how that data is collected, retained and made available to the right users and applications,” she said. “That means student data privacy and protections in the states and districts do not change with the adoption of inBloom services. Education content providers will continue to contract directly with states, districts, and schools as they already do in order to access and provide any services that utilize student information.”

Even before inBloom, student data has been given to “vendors.” Technically, the vendors inBloom and Haimson are referring to do not only include major corporations like McGraw-Hill or Pearson but also bus services and report card distribution, both of which require student data be handed over to a third party.

“The way things are set up now, every district organizes data differently, so each district pays each company they contract with separately,” Adina Lopatin, a deputy chief academic officer for the DOE, said at a April 29 town hall in Brooklyn. “The state is choosing to use inBloom because it has a common set of standards so districts won’t continue to pay each vendor separately.”

“I am disgusted,” Natasha Capers said. “It is no one’s business to use my children’s information to know what they need to know. How are they going to make it better? My child has three absences. How are you going to fix that? Is Amazon going to call me?”

What bothered parents the most was the fact that they could not opt out of the pilot program.

“The state is telling districts that they have no requirements to tell parents,” Haimson said. “We are working on a piece of legislation that grants us an opt-in option, which is stronger than an opt-out.”

In March, Assembly Bill A06059 was introduced by Assemblyman Daniel O’Donnell (D-Manhattan) and is sponsored by more than 50 other Assembly members.

The act is set “to amend the education law, in relation to the release of personally identifiable student information” by entirely prohibiting the sharing of personal student information without parental consent. If passed, it will take effect July 1 and will apply to the upcoming 2013-14 academic year.

Assemblywoman Cathy Nolan (D-Sunnyside), who chairs of the Education Committee and is one of the bill’s co-sponsors, would not return repeated calls to her office for comment.

For now, Class Size Matters is asking CECs across the city to pass resolutions for parental consent prior to sharing student information.

“Personal information should never be shared without parental consent,” Haimson said. “The whole project is very risky and there is no evidence that putting instruction online will benefit students.”

However, inBloom and the work it will do in the coming months are compliant with the Family Educational Rights and Privacy Act, a federal law created specifically to protect the privacy of families and students.

Though inBloom states in its privacy policy that it cannot guarantee that information will not be leaked, the group is confident that enough provisions have been taken.

“Student privacy is a top priority for inBloom and protections for student privacy have been addressed throughout the design and ongoing operations of our solution,” the inBloom spokeswoman said.