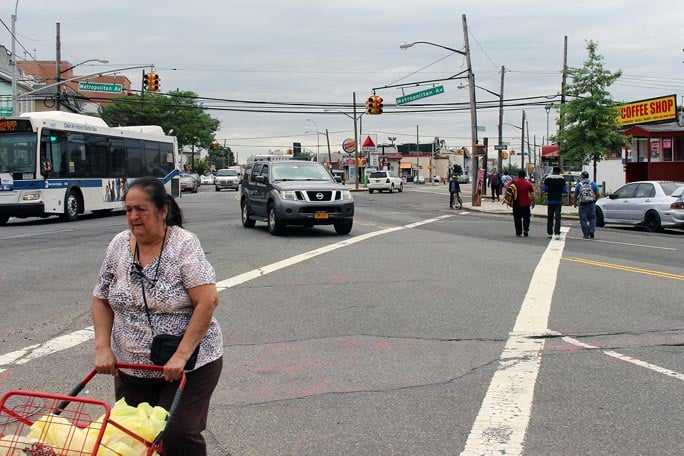 Citing the high number of accidents at the corner of Metropolitan and Hillside avenues, the city Department of Transportation wants to make a number of changes to both streets, but the plan ran into resistance when presented to Community Board 9 Tuesday. A top concern is the danger posed to pedestrians by westbound vehicles making turns, as above. 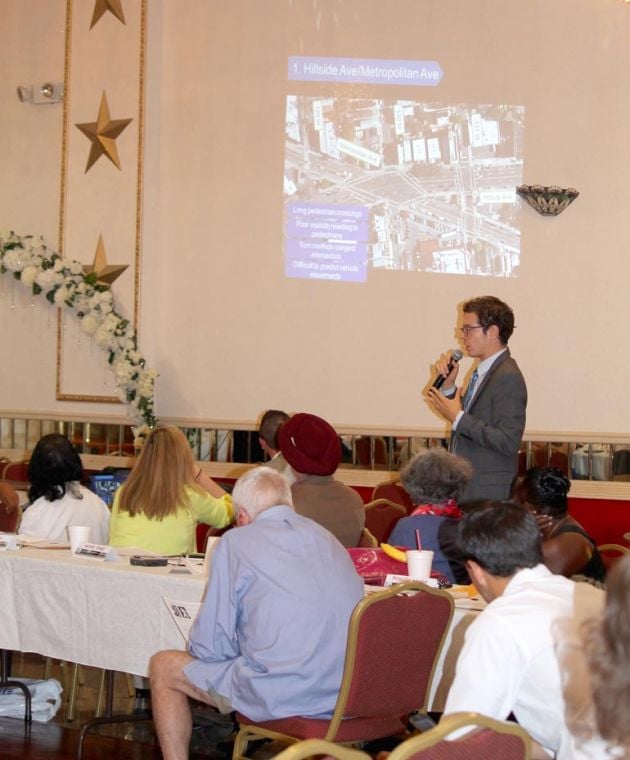 Richard Carmona goes over the DOT’s plans for the intersection of Hillside and Metropolitan aves. at Community Board 9 Tuesday night.

Citing the high number of accidents at the corner of Metropolitan and Hillside avenues, the city Department of Transportation wants to make a number of changes to both streets, but the plan ran into resistance when presented to Community Board 9 Tuesday. A top concern is the danger posed to pedestrians by westbound vehicles making turns, as above.

Richard Carmona goes over the DOT’s plans for the intersection of Hillside and Metropolitan aves. at Community Board 9 Tuesday night.

Kenichi Wilson, chairman of Community Board 9’s Transportation Committee, seemed to be taken by surprise by the reaction to what many members thought would be a run-of-the-mill vote.

The city Department of Transportation came to CB 9’s June meeting Tuesday night to unveil its plans to alter the intersection of Metropolitan and Hillside avenues on the Richmond Hill/Kew Gardens border.

The odd confluence of the two east-west thoroughfares is dangerous — no one disputes that – but the DOT plans for the intersection, plus two nearby, part of Mayor de Blasio’s Vision Zero plan to reduce pedestrian fatalities, did not sit well with some residents who attended the meeting hoping to speak out before the board weighed in with a vote.

They were concerned about the effects on traffic and businesses in the area.

According to DOT statistics, 46 people were hurt in more than 50 motor vehicle accidents at the intersection between 2008 and 2012. Sixty percent of crashes involving pedestrians occurred when they were crossing with a signal. A quarter of all accidents involved a left-turning vehicle, most notably cars making left turns from westbound Metropolitan Avenue onto westbound Hillside Avenue.

“This is a dangerous intersection,” said Richard Carmona, project manager at the DOT. “There are really long pedestrian crossings on Hillside Avenue. There is poor visibility and difficulty for drivers to see pedestrians crossing the street.”

The location, about a quarter mile west of the Van Wyck Expressway, is used by pedestrians living nearby accessing stores along both streets and children and parents walking to nearby PS 54.

But several residents and business owners at the meeting opposed the DOT’s plans, which include converting one block of Metropolitan Avenue into a one-way, adding medians on both routes and altering the intersection of Hillside Avenue and Kew Gardens Road a block away.

Michael Butler, president of the Richmond Hill Business Persons Corp., who owns a business nearby, said he opposed the plans and wanted the board to take the effect it would have on businesses into consideration

“They are completely wrong about this, it’s a mistake,” he said

The main issue was the proposal to make Metropolitan Avenue a one-way eastbound between Hillside Avenue and 131st Street, which Butler said would disrupt businesses by eliminating a key route customers take by car.

Westbound traffic would have to make a right on 131st Street and a left onto Hillside Avenue, where drivers could either continue straight or make a right back onto Metropolitan Avenue.

The DOT would also add medians to Hillside and Metropolitan to allow pedestrian refuge and extend curbs to shorten crossing distances.

The department is also planning a left-turn lane for westbound traffic on Hillside Avenue to turn south onto 127th Street near PS 54.

Because the presentation was done before the public forum, Butler was unable to speak on the topic earlier. Several members of the board went up to him and inquired about his opposition.

“I’m telling you we will fight this plan,” Butler told CB 9 member Clark Whitsett, who pulled him aside to speak. “We’ll shut down traffic if we have to. They’re lying and this is wrong.”

After speaking to Butler, Whitsett asked for a final vote on the plan to be tabled pending a public hearing.

But Wilson, the transportation chairman, who had brought a motion from the Transportation Committee to the full board to approve the plan, warned that any delay would push a vote on the plan until September with the possibility of no action on the changes until next year.

“What ends up happening is it’ll be OK’d in November and December, but then it’s too cold to do any work there,” he said. “It may be seven more months before anything is done.”

Wilson motioned for a public hearing with the full board present to be held on June 23 so that a final vote can be taken then, but the board voted that down as well as several members said they couldn’t attend a meeting that day, pushing the issue to September.

CB 9 member Jim Coccovillo said the board should have approved the plan, or at the very least worked out a public hearing date for the summer.

“Now this issue is going to get pushed to the fall and this intersection is going to remain the dangerous place it is for that much longer,” he said.

“If it makes you feel any better, Jim, they’re going to do whatever they want anyway,” he said.

"But board member Dr. Stephen Sofer half-jokingly reminded Coccovillo that the community board’s vote is purely advisory.
“If it makes you feel any better, Jim, they’re going to do whatever they want anyway,” he said."

If only that were the case, but it is not true. Safer street plans have been upended by community boards all over the city. And the death toll has continued as a result.