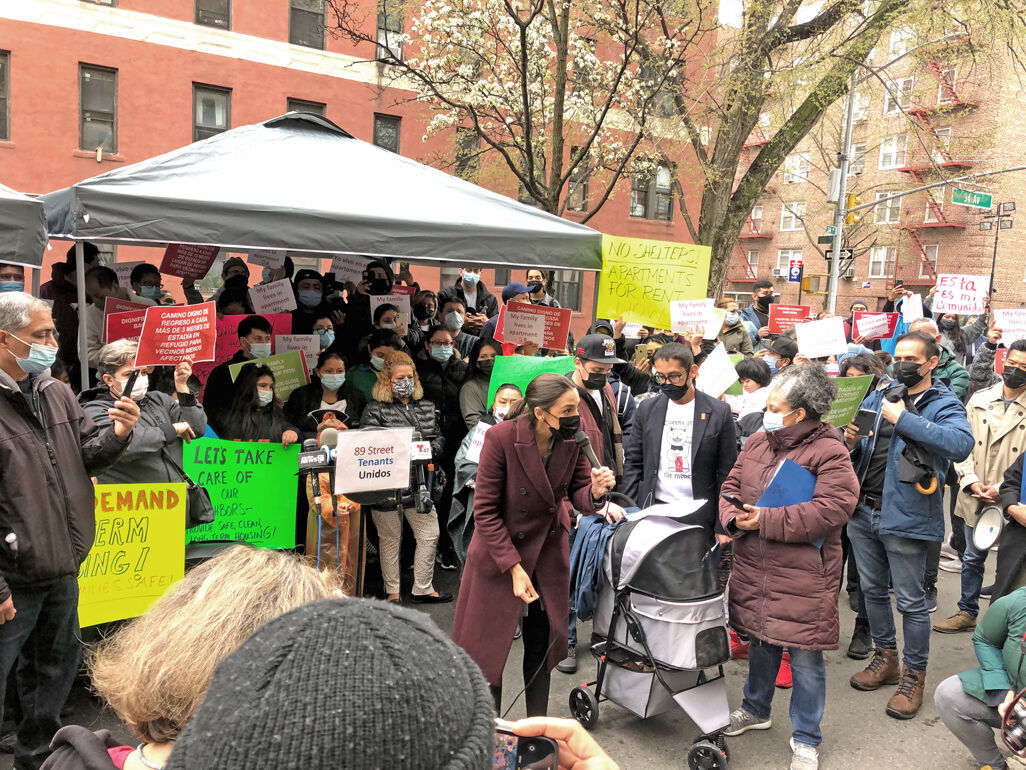 Dozens of people affected by the April 6 fire at 89-01 34 Ave. in Jackson Heights and their supporters turned out Monday for a press event on the efforts being made to help them. The Red Cross has been vital and a GoFundMe page had raised nearly $330,000 for the 89th Street Tenant Association by Wednesday afternoon. Rep. Alexandria Ocasio-Cortez was among those who spoke at the press conference. 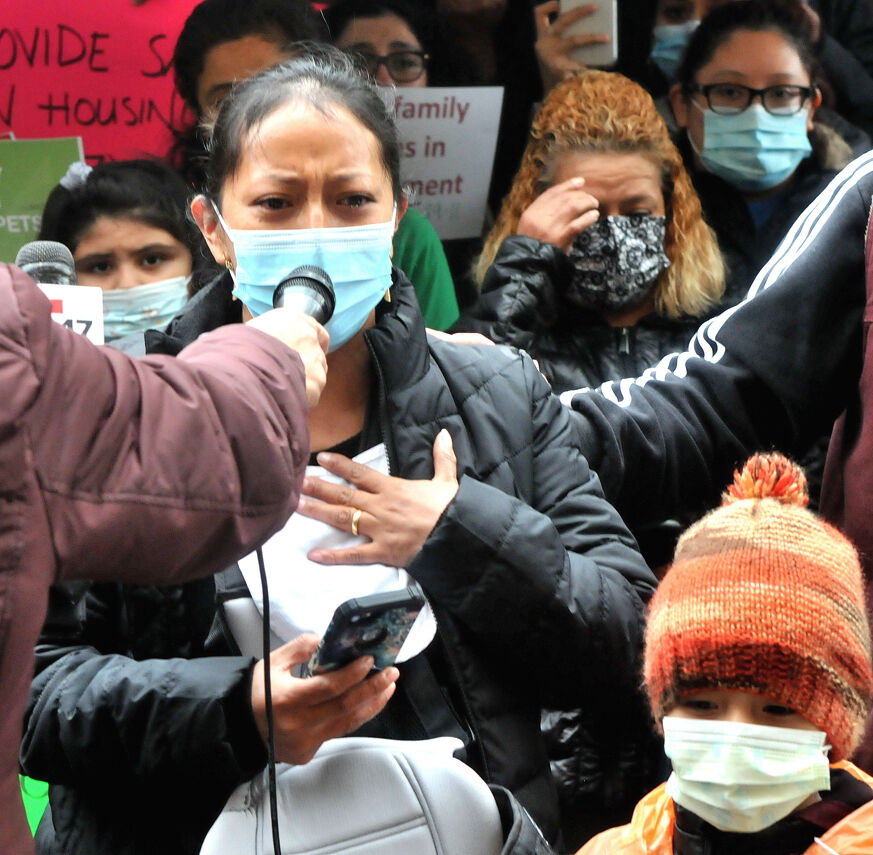 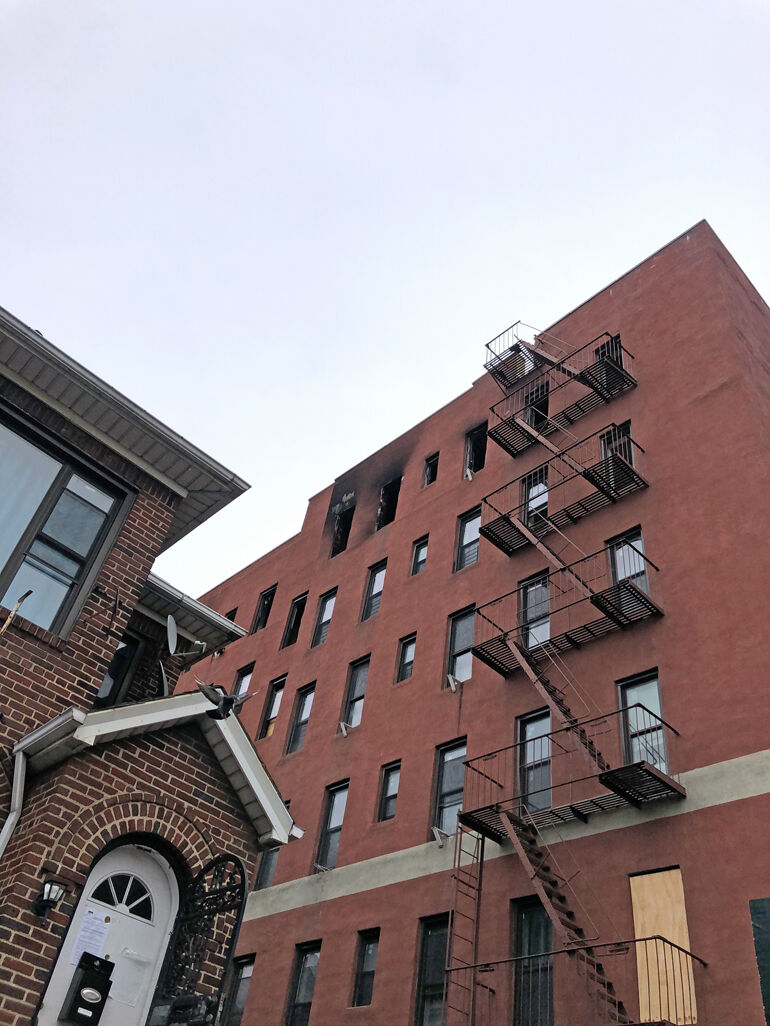 The burnt out portion of Mayfair Court. 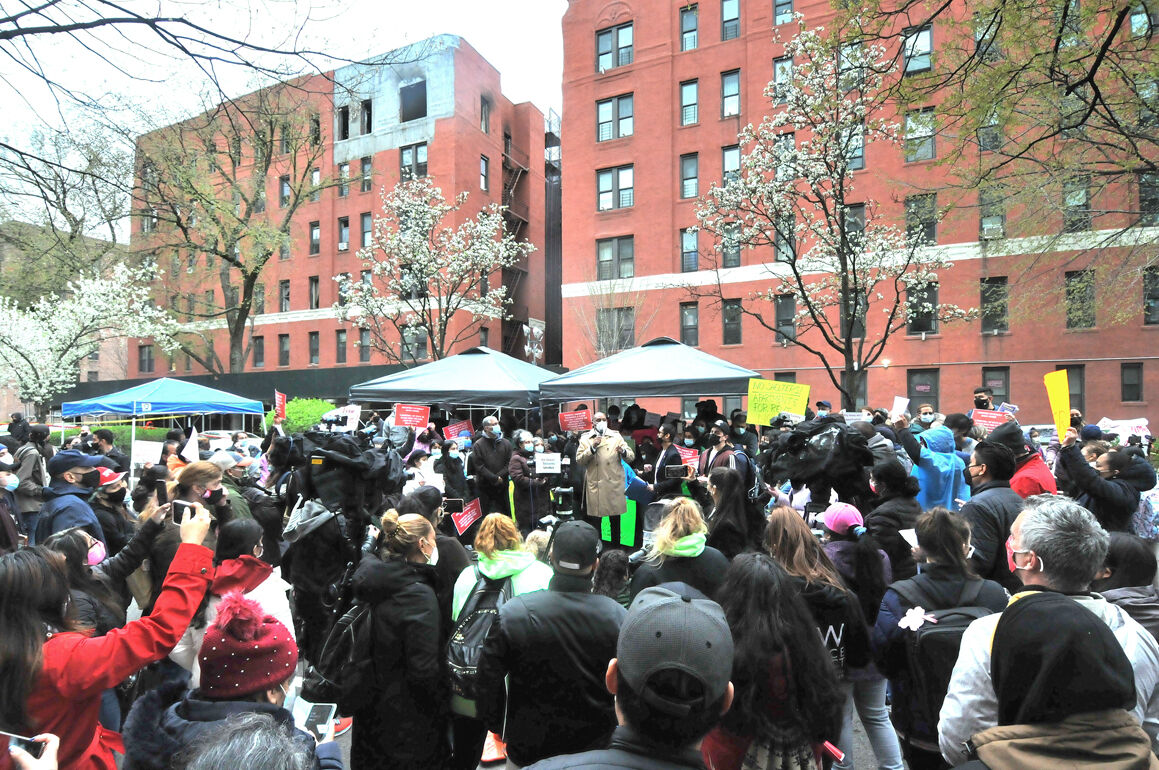 Tenants of 89-01 34 Ave. in Jackson Heights, known as Mayfair Court, gather with supporters outside their burned-out building on Monday. Borough President Donovan Richards was one of several speakers.

Dozens of people affected by the April 6 fire at 89-01 34 Ave. in Jackson Heights and their supporters turned out Monday for a press event on the efforts being made to help them. The Red Cross has been vital and a GoFundMe page had raised nearly $330,000 for the 89th Street Tenant Association by Wednesday afternoon. Rep. Alexandria Ocasio-Cortez was among those who spoke at the press conference.

The burnt out portion of Mayfair Court.

Tenants of 89-01 34 Ave. in Jackson Heights, known as Mayfair Court, gather with supporters outside their burned-out building on Monday. Borough President Donovan Richards was one of several speakers.

As the dust settles, the scope of the disaster at 89th Street becomes more apparent. Every single apartment in the 133-unit building at 89-01 34 Ave. sustained damage.

“The fire that occurred last week has caused tremendous losses for the residents of the building,” City Councilmember Danny Dromm (D-Jackson Heights) said of the extent of the damage.

The Red Cross reports that since last Tuesday afternoon, 134 households had registered for emergency services, totaling 472 residents. Many families lost everything, and those whose apartments were not completely destroyed have no timeline for when they will be allowed to return home.

In the face of this immense loss and heartbreak, the Queens community — and people all over the world — have pulled together to support their neighbors during their time of need, in an incredible display of strength and resilience.

A GoFundMe fundraiser to benefit the 89th Street Tenant Association, organized by Jesus Puerto, has raised more than $328,000 dollars since last Tuesday, with over 4,000 people donating. Since hitting its initial goal of $250,000 on April 9, the fundraiser’s goal had been raised to $450,000, in the hopes of raising an additional $1,500 per apartment damaged.

The Red Cross has been a critical component of the massive relief effort, working tirelessly to provide housing, meals and financial assistance for families that have been displaced because of the fire. Of the 134 households that the Red Cross has registered for emergency services, 102 have been provided lodging by the organization, with the rest opting to stay with friends or family.

Beyond providing for basic needs like food and housing, Red Cross health service volunteers are also addressing the physical and mental health needs of residents, like helping to secure lost prescription medication and helping families to cope with trauma that they may be facing as a result of such a sudden and devastating disaster.

Red Cross caseworkers are working with families one-on-one to address their needs on a more personal level, providing them with any additional assistance they may need and connecting them to other valuable community resources. As part of the casework process, many families have already been referred to the city Department of Housing Preservation and Development for longer-term housing, to ensure that they will continue to be taken care of.

The biggest question on the mind of many residents is where they are going to sleep next week, and a big problem that they have is that when they are referred to the HPD, they are just being told to go into shelters, while what they need is more permanent housing.

At a press conference outside the scene of the fire on Monday, Rep. Alexandria Ocasio-Cortez (D-Bronx, Queens) announced that temporary lodging in hotels for residents had just been extended an extra week until April 20, which means that now residents will not have to worry about being homeless for another week, at which point they will again be faced with it.

Two additional issues that residents have with the HPD is that they are not being allowed to stay with their pets, forcing them to put their companions into animal shelters; and they are being provided lodging on the other side of Queens near Kennedy Airport, effectively uprooting their lives. Kids would have to change schools according to zoning requirements and elderly people who are not as mobile, or who had developed a sense of security in the neighborhood, would not be able to get around as easily, they say.

Elvira Suarez was one such resident who spoke at the press conference and expressed her discontent with the HPD. She told of how she has lived in apartment 2U with her husband for 45 years and how 89th Street is their home, and the place where they want to stay.

She explained how in the rush of evacuating for the fire, she only had time to grab her dog, meaning that two of her cats died in the fire. She expressed discontent with the HPD for its strict no-pets policy, which means that her surviving cats are being forced to stay at an animal shelter in Manhattan.

“It hurts because I don’t know if they are being treated correctly,” Suarez said.

She also spoke about the difficulties she and her husband face because of their older age, saying, “I’m 73 years old and my husband is 78 years old; how do you expect us to commute on public transportation — or go to doctors’ appointments?”

The struggle of being a pet owner or of having limited mobility, both of which the Suarezes face, may not be something that all residents of the building called Mayfair Court are dealing with right now, but the struggle of having to face the unknown, of not knowing if they will have a roof over their head next week, is something all the families are grappling with right now.

Ocasio-Cortez spoke to residents about their fears of having their lives uprooted any further, issuing a call to action.

“Now we need to make sure families can get their homes back — and their lives back — keep kids in schools, making sure that our workers can continue to live in this community, that this is not used as a cover for displacement,” she said. She assured residents that she will be doing what she can to make sure they are not just going to be provided for in the short term, but will ultimately be returned to the community that they call home.

State Sen. Jessica Ramos (D-Jackson Heights) also spoke to the residents on Monday, saying, “We have to prevent another catastrophe like this from happening again.” She raised the issue of infrastructure and how poor infrastructure could have played a role in the cause or the scale of the fire. She even drew parallels with her own life, saying, “Even at my apartment building on 79th Street, our wires are still covered in cloth, and so we need urgent upgrades to our infrastructure in order to save our lives as well.”

On 89th Street, the fire spread through the building’s cockloft, the open space between the top floor’s ceiling and the roof, a feature of many older buildings. The Fire Department has not yet determined a cause of the blaze.

Sergio Melo, who lived in apartment 1C for 22 years, retold his account of what happened on the day of the fire, saying that he wasn’t sure what was going on and was only alerted to the blaze because his neighbor from the sixth floor knocked on his door to alert him.

Melo said there was no fire alarm in his apartment, “and I know this is true for many of my neighbors.” He also went on to criticize the HPD, saying that residents are not being treated with kindness and are being pressured to go into shelters when they do not want to go.