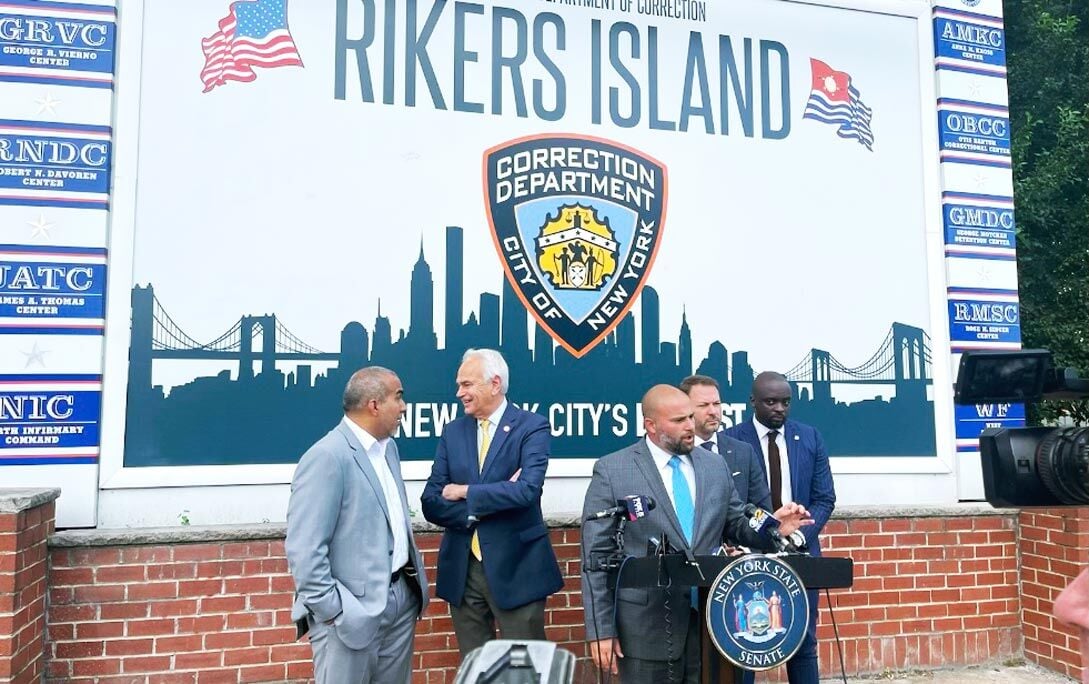 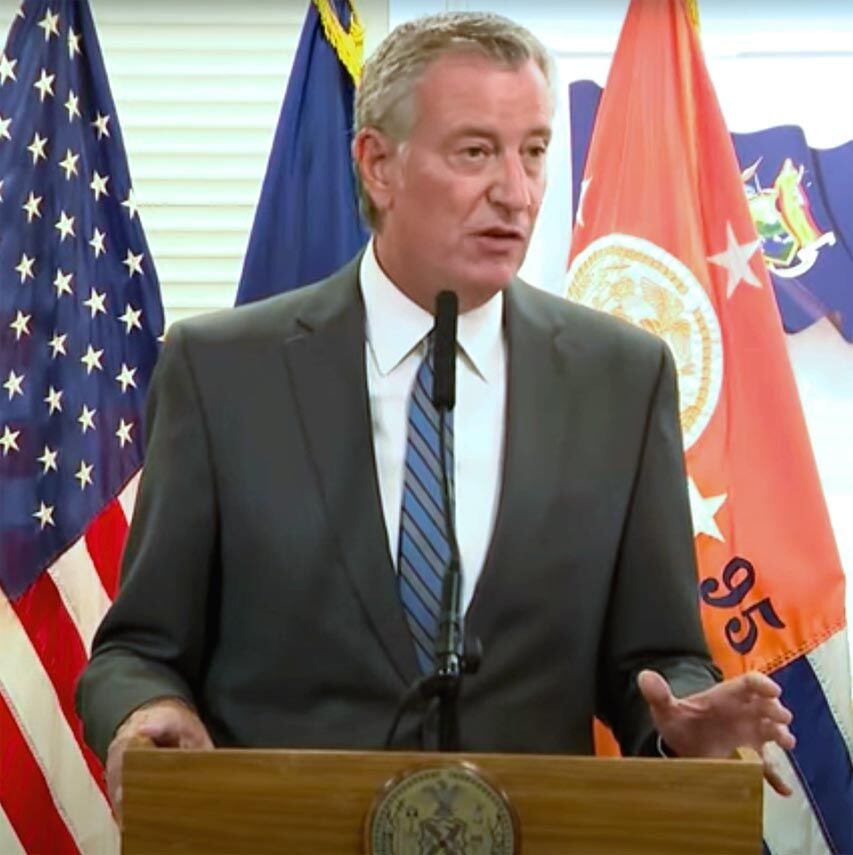 Mayor de Blasio at a press conference after what COBA President Benny Boscio called a “watered-down” tour of Rikers Island.

Mayor de Blasio at a press conference after what COBA President Benny Boscio called a “watered-down” tour of Rikers Island.

“He did not go see any housing areas where inmates are housed,” said Benny Boscio, the president of the city’s Correction Officers’ Benevolent Association, via Twitter. “You could smell the paint.”

De Blasio was more concerned with his agenda to reduce the detainee population for borough jails, according to COBA.

“So, I was looking at the places where that reduction is happening, what it is causing in terms of improving the situation for officers and inmates alike,” said de Blasio. “We have a lot of additional actions we’re going to take in the next few days. As I said, our goal is to get the overall population down under 5,000 for the jail system very, very quickly.”

Holden, who toured Rikers on Sept. 23, had a different experience.

“The situation on Rikers Island is a full-blown humanitarian crisis, and Mayor de Blasio has been asleep at the wheel,” said Holden in reference to bail reform, initiatives to close Rikers Island and most recently the Big Apple leader encouraging the Empire State’s newly appointed governor to sign the Less is More Act.

The Less is More Act, signed by Gov. Hochul on Sept. 17, is a parole bill that was introduced in 2018 with the purpose of restricting the use of incarceration as punishment for noncriminal technical violations; bolstering due process so that instead of automatic detainment in jails, people accused of a noncriminal violation will be issued a notice of violation to appear at hearings that are accessible to the public; and requiring speedy hearings that are completed within 55 days instead of 105.

“I dare you find someone at Rikers that is there for noncriminal stuff,” said Holden. “They are in there for felonies and these people are violent — most of them are violent and they have been accused of violent crime. For the other elected politicians that went there, I agree, this is not a place you want to be, but you don’t just let people out ... They agreed to show up to their parole officer ... whatever it was and they were remanded back into jail. There’s got to be some accountability. You can’t let everybody out of jail who are violent offenders.”

The Less is More Act also provides “earned time credits” to reduce parolees’ community supervision time for every 30-day period in which they do not violate a condition of their parole, according to the Less Is More NY Coalition, the advocacy group that pushed for the bill.

In 2019, the state Legislature passed bail reform that removed or limited the use of cash bail against defendants who were accused of misdemeanors and many violent felonies. In 2017, the city committed to closing all jails on Rikers Island and creating smaller borough-based jails.

Holden said it’s time for de Blasio to reform how Rikers is staffed.

Boscio accused the mayor of remaining focused on his own agenda via a five-point Emergency Rikers Relief Plan instead of talking with prisoners or staff.

Part of the plan includes adjusting staffing by shifting some NYPD officers to help operate courts to allow some Department of Correction staff to shift to duty on Rikers and toughen accountability for AWOL staffers with 30-day suspensions for correction officers who do not show up to a post.

Queens has approximately 2,490 parolees who are managed by 48 parole officers and senior parole officers, according to the state Department of Corrections and Community Supervision. There are approximately 831 parolees on Rikers Island. Of that number, 638 were arrested for new criminal charges — 188 on absconder warrants for violating the conditions of their parole and five were technical violators, each with pending felony holds for new crimes. Via the Less Is More Act, 301 parolees have been processed for release as of Sept. 29, 201 have been released and the remaining have legal issues preventing their release. To date, 128 have been transferred.

On Sept. 24 Holden and Borelli issued a joint statement about the conditions on Rikers Island.

“After years of negligence and lack of investment at Rikers Island by Mayor Bill de Blasio, elected officials of every political stripe can agree that the facilities and conditions at Rikers are unacceptable by any civilized standards, for correction officers and inmates alike,” said the councilmen. “Despite having to wait a very long time and some back and forth with the Mayor’s Office, we persevered long enough to enter the jail and see the nightmarish environment for ourselves. Yesterday’s unannounced visit of several jail facilities on the island revealed conditions resembling a third world country that no one should have to endure.”

Holden and Borelli waited 45 minutes before they were allowed to tour the jails of Rikers.

“The mayor’s people tried to keep us out ... we couldn’t take our staff,” said Holden. “It was worse than I could ever imagine. It was very stressful on everyone.”

At the Otis Bantum intake center there were 15 men to a holding pen, according to the councilman. Many of the prisoners were sleeping on a wet floor while other inmates were screaming.

“There were several holding pens that were like large jail cells with a lot of people packed in them and they were saying they were in there for several days,” said Holden. “There was one partition behind a toilet and there was a sink, and that was it. No beds, just some seats that people are sitting in. Those who couldn’t sit are on the floor ... it was just chaotic.”

There were separate holding pens for other men who were causing fights, according to Holden.

“Mayor de Blasio and his administration have shown disdain for inmates, correction officers, and staff. What we saw yesterday was criminal and should be investigated by federal authorities. Someone must be held criminally responsible for the humanitarian crisis at Rikers Island. A modern facility should be built on the island, rather than community jails. Letting violent inmates out onto the streets is certainly not the answer. We thank COBA and all of the hardworking men and women who accompanied us on our tour.”

The remainder of de Blasio’s emergency plans addresses some of the problems that Holden witnessed at the jail and others that prison workers have complained about for years.

Since joining the City Council in 2018, Holden has called for a commission to study the cost of rejuvenating Rikers Island, which runs counter to de Blasio’s initiative to spend nearly $9 billion on borough jails in Manhattan, Brooklyn, the Bronx and Queens, which won’t reach its initial target fall 2026 date because of Covid-19 and most likely would be completed in 2027, according to the City Planning Commission.

“If we’re going to have taxpayers foot the bill for the city’s jail facilities, we should be able to show them the facts and figures,” said Holden in a statement.