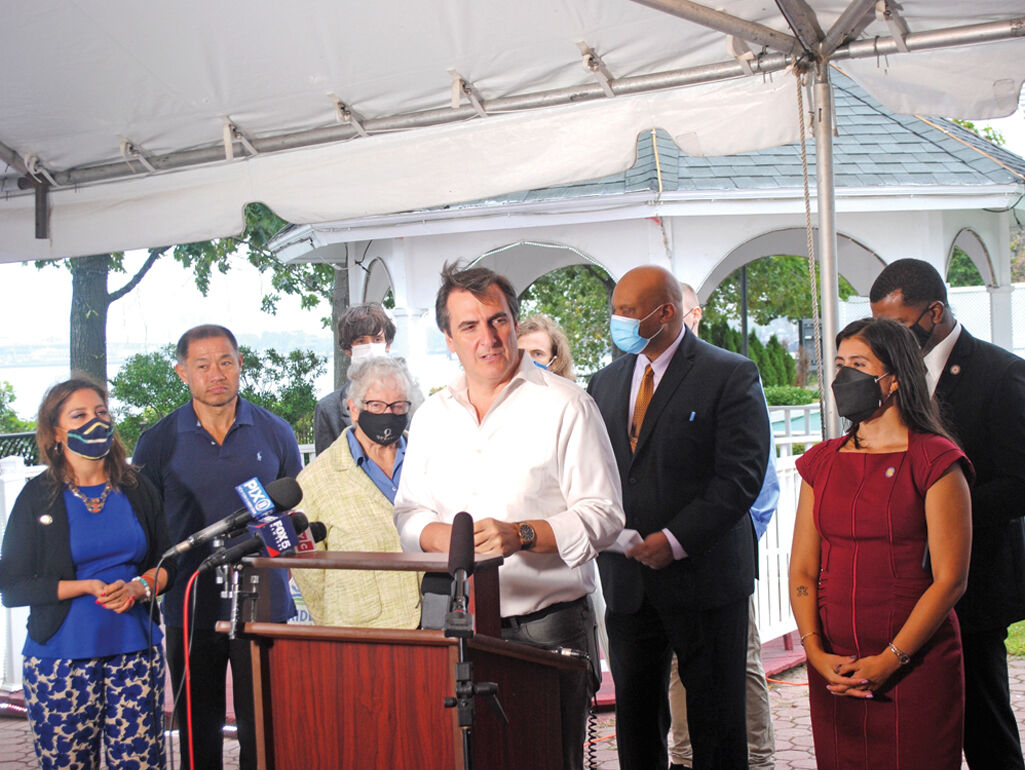 Just as more elected offi cials such as state Sen. Mike Gianaris, at mic, were pressing their opposition to former Gov. Cuomo’s plan for an AirTrain from Flushing to LaGuardia Airport last week, Gov. Hochul said she wants to see alternative options for getting people to and from LGA. The move gave a boost to opponents including politicians no longer under Cuomo’s shadow and environmental and civic groups that opposed the plan to run a train along a scenic promenade from the start. 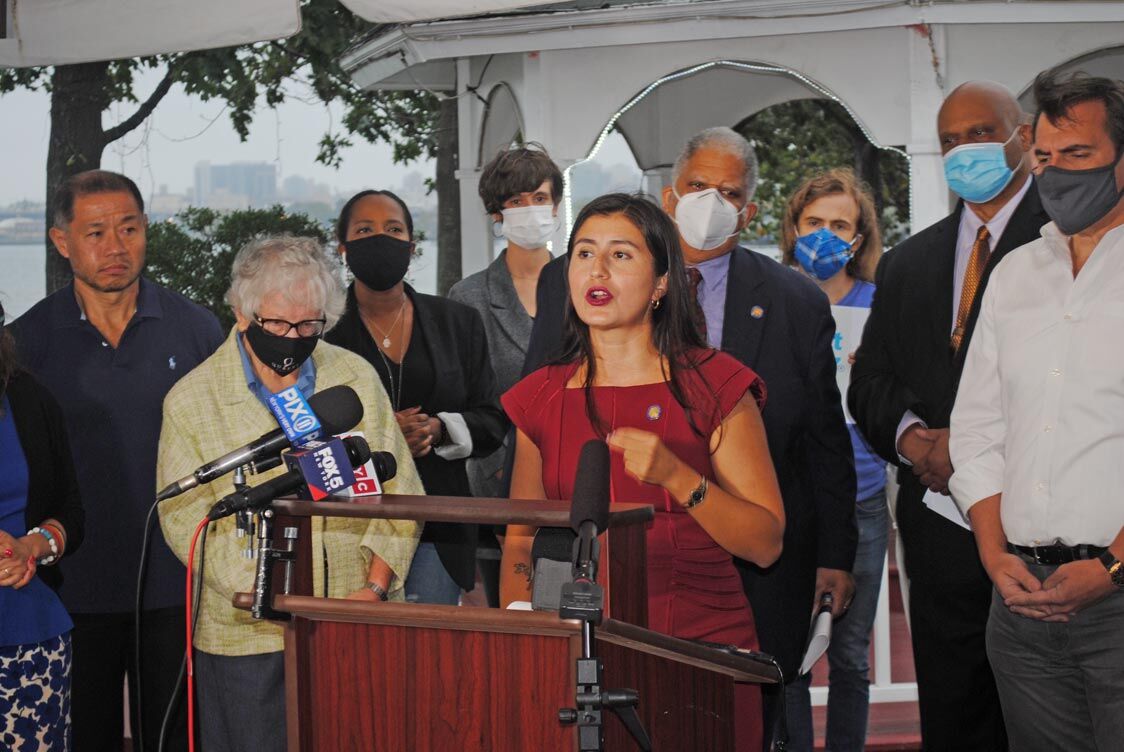 State Sen. Jessica Ramos on Monday led a chorus calling on Gov. Hochul to stop the LaGuardia AirTrain rather than just study alternatives.

Just as more elected offi cials such as state Sen. Mike Gianaris, at mic, were pressing their opposition to former Gov. Cuomo’s plan for an AirTrain from Flushing to LaGuardia Airport last week, Gov. Hochul said she wants to see alternative options for getting people to and from LGA. The move gave a boost to opponents including politicians no longer under Cuomo’s shadow and environmental and civic groups that opposed the plan to run a train along a scenic promenade from the start.

State Sen. Jessica Ramos on Monday led a chorus calling on Gov. Hochul to stop the LaGuardia AirTrain rather than just study alternatives.

Just prior to a well-publicized outdoor press conference on Monday featuring opponents of the LaGuardia AirTrain, Gov. Hochul announced that she directed the Port Authority to examine alternatives that get more people to and from the airport while also getting them out of their cars and onto mass transit.

But many of the participants were just as interested in what Hochul’s statement did not say as what it did.

“New Yorkers deserve world-class transportation to world-class airports,” the governor said, according to her statement. “I have asked the Port Authority to thoroughly examine alternative mass transit solutions for reducing car traffic and increasing connectivity to LaGuardia Airport.

“We must ensure that our transportation projects are bold, visionary, and serve the needs of New Yorkers. I remain committed to working expeditiously to rebuild our infrastructure for the 21st century and to create jobs — not just at LaGuardia, but at all of our airports and transit hubs across New York.”

The $2.1 billion loop would link LaGuardia with a new station built adjacent to the Mets-Willets Point stop for the No. 7 train. The PA has said it is necessary to speed up travel between LaGuardia and Manhattan.

Critics believe options like dedicated bus service or extending the elevated N/W subway line from Astoria were deliberately ignored. Newsday has reported that the Federal Aviation Administration, which approved the plan’s environmental review in July, could take another look.

Ramos and others said simply examining other options is not enough. She called on Hochul to stop the project altogether.

Ramos and others said the community would have to bear the brunt of the construction; and fear that it would only bring more cars and traffic from people parking in the area to catch the ride to LaGuardia.

Gianaris pointed out that the $2.1 billion cost is roughly quadrupled from the initial estimate of $450 million. Speaking with the Chronicle before the press conference, Gianaris acknowledged that Hochul’s directive on alternatives could interpreted different ways.

“What’s also important is what was not said — ‘Go ahead full speed,’” he said.

Gianaris was a frequent sparring partner of Gov. Cuomo, whom several speakers have long accused of ramming the AirTrain proposal through.

Frank Taylor, president of the Ditmars Boulevard Block Association, said the project would only exacerbate environmentally caused instances of illness in the largely Black and brown community, while doing nothing to alleviate the neighborhood’s public transportation.

“We have high levels of asthma, COPD [chronic obstructive pulmonary disease] and cancer,” Taylor said. “It’s about environmental justice.” Comrie, whose Southeast Queens district is every bit the transit desert as East Elmhurst, echoed both sentiments when he spoke.

The project still has considerable backing, starting with the Port Authority, in addition to maintaining that the elevated line is needed to speed up travel between Manhattan and LaGuardia, noted that among participants in community hearings and outreach sessions approval ran at about 80 percent.

The PA is forecasting 3,000 good-paying construction jobs and more than $500 million in opportunities for minority- and women-owned businesses; and providing $50 million in upgrades for the promenade and local parks, all without taking any private property or going through any neighborhood.

Assemblyman Jeffrion Aubry (D-Corona), in a statement sent out by his office, also was standing firm.

“Unlike some of the elected officials just now speaking up about the project, I have been actively engaged with my community and with policy makers in Albany and at the Port Authority to find the best way to create a rail link to LaGuardia while protecting residents of my community who bear the brunt of airport traffic,” he said.

The assemblyman said he insisted that the line be moved from the middle of the Grand Central Parkway to increase its distance from East Elmhurst neighborhoods.

“And [traffic] only is going to get worse as air travel rebounds and the use of for-hire vehicles increases,” Aubry continued. “The only answer is to move airport traffic from roads to rails.”

A Better Way to LGA — a coalition of community members, economic development groups, construction and other labor unions and other organizations including the Queens Chamber of Commerce — stands by the AirTrain plan. The group has pointed out that LaGuardia is the only major airport on the East Coast that does not have a direct rail link.