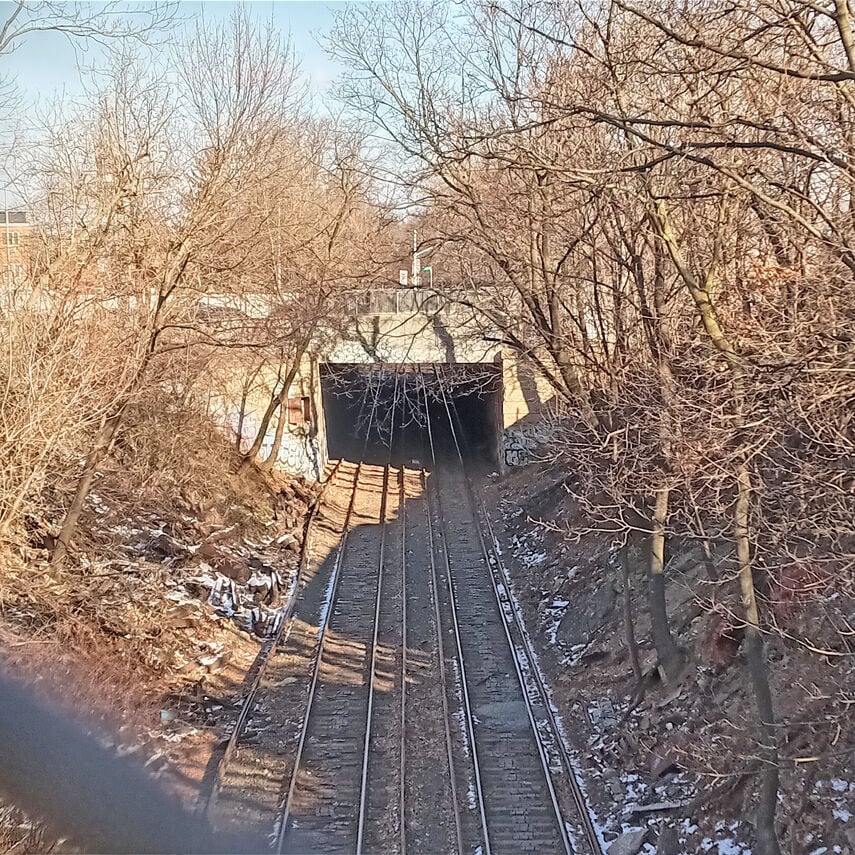 Gov. Hochul has directed the Metropolitan Transportation Authority to study the possibility of adding passenger service to a freight line that runs from Bay Ridge, Brooklyn to Jackson Heights, including this section in Middle Village, above, looking north toward Juniper Boulevard South. 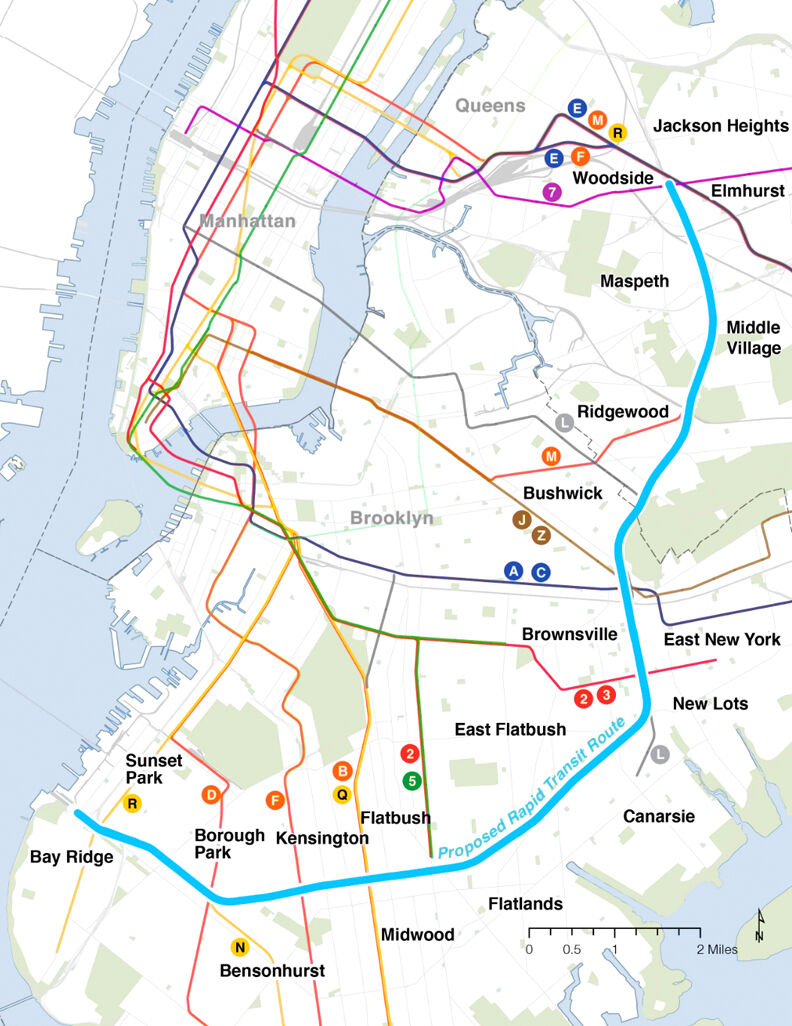 The Metropolitan Transportation Authority will study using a freight line for Queens and Brooklyn passenger trains. 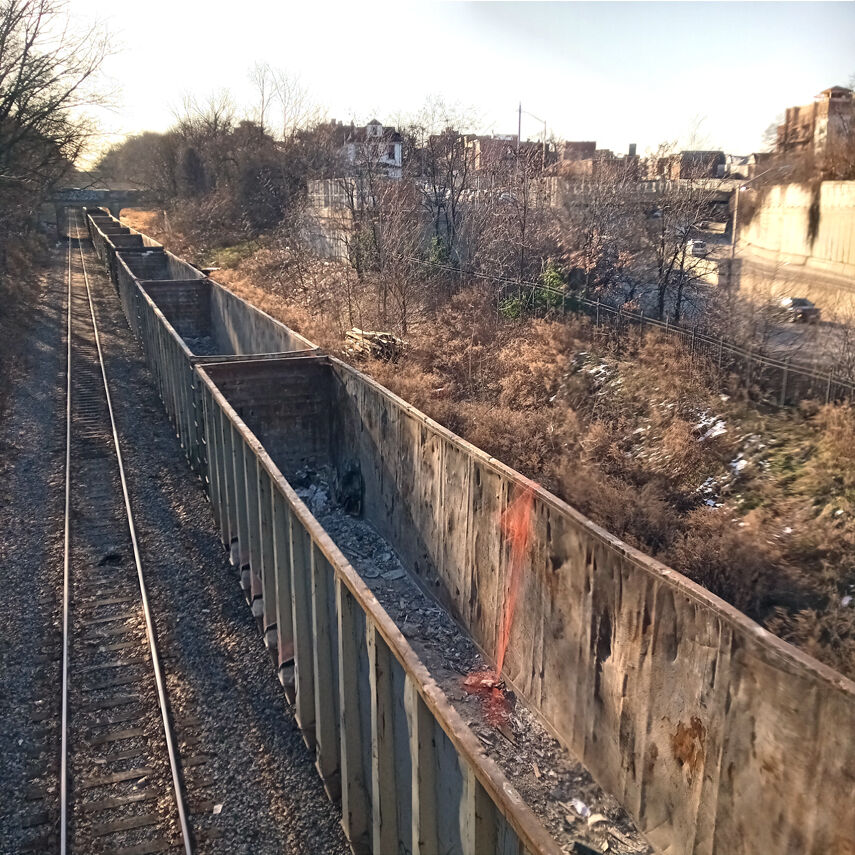 Gov. Hochul has directed the Metropolitan Transportation Authority to study the possibility of adding passenger service to a freight rail line that runs from Bay Ridge, Brooklyn, to Jackson Heights, above. Reviving an old highway name, the route would be called the Interborough Express.

Gov. Hochul has directed the Metropolitan Transportation Authority to study the possibility of adding passenger service to a freight line that runs from Bay Ridge, Brooklyn to Jackson Heights, including this section in Middle Village, above, looking north toward Juniper Boulevard South.

The Metropolitan Transportation Authority will study using a freight line for Queens and Brooklyn passenger trains.

Gov. Hochul has directed the Metropolitan Transportation Authority to study the possibility of adding passenger service to a freight rail line that runs from Bay Ridge, Brooklyn, to Jackson Heights, above. Reviving an old highway name, the route would be called the Interborough Express.

Gov. Hochul, however, is banking on the possibility of using an existing freight rail right-of-way to move up to 100,000 people a day in Queens and Brooklyn.

The governor last week directed the Metropolitan Transportation Authority to begin the environmental review process for what has been termed the Interborough Express. It would run passenger service along an existing freight line between Bay Ridge and Jackson Heights.

The aim is to use the 14-mile route — known as the Bay Ridge Branch — to connect residents with up to 17 subway lines and the Long Island Rail Road. Hochul said this could cut the time of commutes to and from Manhattan to under 40 minutes from some locations. It also would provide much-needed north-south service.

“It’s time to invest in the bold, cutting-edge infrastructure projects that will make a real difference in the lives of everyday New Yorkers,” Hochul said in a statement issued by her office. “New Yorkers deserve reliable public transit that connects them from work to home and everywhere in between. The Interborough Express would be a transformational addition to Brooklyn and Queens, cutting down on travel time and helping neighborhoods and communities become cleaner, greener and more equitable.”

Janno Lieber, acting chairman and CEO of the MTA, is on board.

“This project would smartly repurpose existing infrastructure to add mass transit and create access to jobs, education, and opportunity for so many residents of Queens and Brooklyn,” Lieber said. He did say it would take state and federal collaboration.

The MTA, in an email, said the tracks in the southern two-thirds of the route are owned by the LIRR, while the northernmost portion is owned by CSX Corp.

Borough President Donovan Richards, in an email from his office, said he wants more details, but is encouraged by the proposal.

“The overall health of any urban community, especially one as large and diverse as Queens, is heavily dependent on the reliability of its public transportation system,” Richards said. “But for far too many Queens families, and the communities they call home, the inability to travel between boroughs in a quick and efficient manner has been an unnecessary detriment to their economic vitality.”

Richards, who representd the Laurelton area while serving on the City Council, often spoke of his own commuting horror stories between home and City Hall when advocating for better mass transit in Queens.

“By transforming the existing freight line running between Bay Ridge and Jackson Heights into a public transit option, we can connect thousands of Queens and Brooklyn families to new employment opportunities in each borough, while dramatically cutting commute times in the process,” he said.

Councilman Bob Holden (D-Middle Village) said in a tweet last week that he likes what he sees.

“Since much of our district is a virtual public transit desert, it’s exciting to revisit this idea. More transportation would be very helpful,” he said.

Holden, however, like Richards, said, “We need a thorough study.”

Transportation, business and rider advocacy groups also are saying so far, so good.

The Permanent Citizens Advisory Committee for the MTA said the project will make a difference in people’s lives.

“With miles of underutilized existing rail infrastructure throughout Brooklyn, Queens and the Bronx, connecting the outer boroughs through a rail line will be transformative in increasing the mobility and equity of our region,” the group said in a press release.”

In a joint statement, Tom Grech, president and CEO of the Queens Chamber of Commerce, and his Brooklyn counterpart, Randy Peers, said everybody in the two boroughs wins.

“The plan is a critically important opportunity that will create efficient and safe transit modes to connect neighborhoods and business districts that for far too long have been isolated by transportation deserts, while at the same time making New Yorkers less reliant on congestion causing cars, equally benefitting our economy and environment,” they said.

Danny Pearlstein of the Riders Alliance said the move would cover a few of his organization’s bases.

“Governor Hochul’s proposed Interborough Express would dramatically improve access to the city for millions of people in Brooklyn and Queens,” he said in an email. “It’s a major advance toward transit equity and a critical tool in the fight against climate change.”

He said Hochul should maximize its value to New Yorkers with frequent and affordable service and connections to high-speed, high-capacity bus routes to neighborhoods far from the subway.

“The city and state are both working hard to expand access in transit deserts, which is mission critical for ensuring a more equitable transportation network,” Reynolds said. “We look forward to seeing how the Interborough Express will integrate with the commuter rail and freight network, especially with the MTA’s Penn Station Access project and Port Authority’s Cross Harbor Freight Project. Together, these projects could be a game-changer for regional accessibility, curbing emissions from cars and trucks, and reducing congestion on our crowded streets.”

What the LIRR Rockaway line ? It just sits there like a sleeping giant waiting to be called back to duty. You can see it from space. Tracks, and Stations and "Right Of way" are still there !