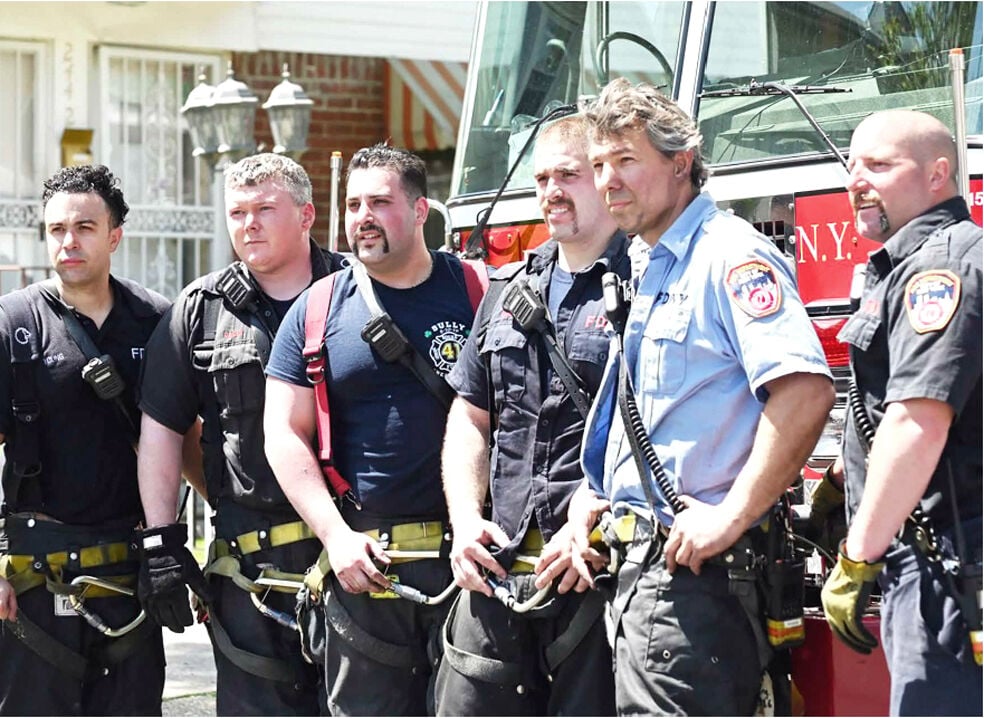 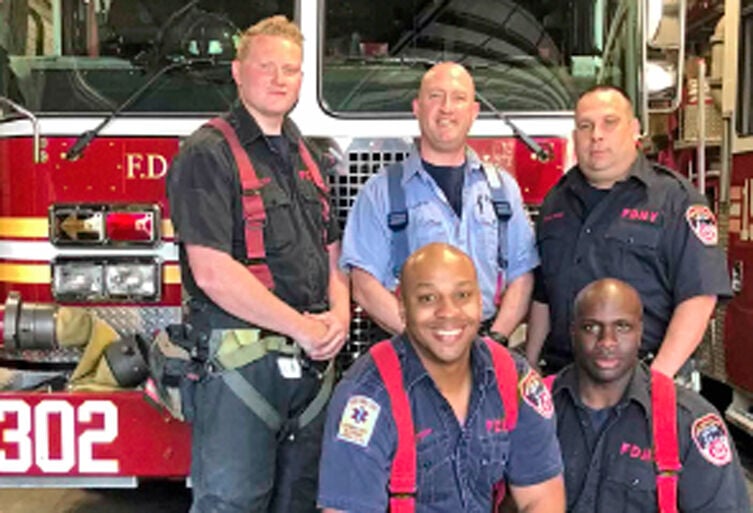 The FDNY gathered at Arthur Ashe Stadium in Flushing Meadows Corona Park on June 2 to honor the bravest of New York’s Bravest on Medal Day.

Twenty-one who work or live in Queens were among those decorated. Photos and information on citations were published in the FDNY’s Medal Day Book.

The men of Engine Co. 316 in East Elmhurst knew they would be the first squad to a house fire on the afternoon of May 17, 2020, as any other unit would have had to pass their station to come that far north.

Capt. Thomas Sussman had just called in that flames were pouring from windows on the second story when he was told an elderly woman and her son were trapped there.

Sussman entered and climbed the stairs as Firefighter Daniel Casey manned the front door and FFs Brett Grill and Robert Landon connected their pumper to a fire hydrant while FFs Lawrence Young II and Steven Guida began stretching a hose to the house.

Reaching a door at the top of the stairs, Sussman encountered heavy smoke and massive amounts of clutter. The pent-up heat in the apartment rendered his thermal imaging camera useless.

He located the woman and dragged her outside, handing her off to Casey, who took her to the sidewalk and began administering medical treatment. Regaining consciousness, she said her son was still inside.

With no ladder company or backup engine yet on scene and 316’s hose line not yet ready, Sussman went back in. He radioed that he had found the son deep in the rear of the second floor. As he tried to lift the man with fire lapping at his back, both fell, temporarily dislocating Sussman’s breathing mask. Grill and Guida charged inside. They banged on the floor to guide Sussman toward them. Just as the room lit up, Young, working alone, arrived with a hose to offer Sussman, Guida and Grill cover as they carried the man out.

Just when things couldn’t get worse ...

Firefighters heading to a house fire just after midnight last July 24 were getting unsettling reports over the radio — first floor fully engulfed and in danger of failing; people trapped on the second floor.

And finally, “no hydrant, no positive water source.”

There still was no hose protection when FF William Long of Squad 288 in Maspeth fought his way to the floor above the inferno. Searching through furniture in one room, Long, a Rockaway Beach resident, felt an arm wedged between a mattress and a wall. Prying the bed from the wall, he freed a woman and kept her low while navigating through a maze of furniture.

The blaze had blown out the first-floor windows as Rescue 4 of Woodside arrived. FF Richard Schmidt headed to the rear of the house when someone approached him and confirmed that people were trapped upstairs. On arrival he braced a portable ladder while FF Daniel Hickey forced his way through window bars on the second floor before following him up.

Schmidt checked the rear bedroom and headed to a hallway, inching his way through clutter to a room at the front of the building. Opening a closet he found a female victim slumped over and covered with clothing and debris. He carried her outside, performing CPR on her until medical units arrived.

Still with no hoses charged, FF Antonio Tarabocchia, also of Rescue 4, had only a colleague’s handheld extinguisher for protection as he headed up to the second floor, though the heat and lack of water forced him to the floor to continue searching for victims and a place where he and anyone he found might be able to take refuge as conditions deteriorated.

In a room filed with furniture and a tangle of bicycles, he heard a faint gasp. Heading toward it he found a woman on her knees covering a child. Hickey arrived to assist with the woman’s rescue. Tarabocchia then crawled back for the little girl, carrying her out on his shoulder to EMS personnel.

Long received the Thomas A. Kenny Memorial Medal. Schmidt was awarded the Emerald Society Pipes and Drums Medal for an outstanding act of heroism. Tarabocchia received the Emily Trevor/Mary B. Warren Medal for heroic endeavor in the face danger.

Waiting not an option

Capt. James Ellson of Jackson Heights led the inside team from Ladder Co. 176 to the seventh floor of a Brooklyn low-rise on March 12, 2020, when they encountered a resident in the hallway who told them a woman still was inside the apartment where the fire began. Then his team learned that scaffolding around the building was slowing operations to get a hose to the seventh floor from the outside.

Crawling through burning debris in the hallway, Ellson and FF Dominick Prince made it to the apartment. Reaching a rear bedroom, Ellson heard moaning from behind a closed door that had begun to ignite. He found a semiconscious woman and got her out of the apartment, giving her to Engine Co. 233 before continuing to search.

Ladder Co. 152 of Fresh Meadows had an unpleasant greeting last June 21 when members arrived at a three-story house in the early morning hours. A heavy fire outside the front entrance was being fueled by exploding propane tanks, gasoline containers and paint cans. The fire along the front of the building was expanding as FF Joseph Ambrosio forced his way through the front door.

Piles of debris and clutter slowed them down, stalled the process of getting a hose line inside and hampered the search for victims. Hearing a groaning noise, Ambrosio groped his way to a kitchen area, where he found a victim at the foot of a staircase.

Still without a hose line, Lt. Peter Dolan cleared debris between Ambrosio and the front door while FF Richard Kuntzler kept the fire at bay on the path with a hand extinguisher.

Man with a knife

Last Aug. 11, EMTs Timothy Nimal and Samson Shakarian, a Bayside resident, of the Queens Tactical Response Group were dispatched to a call of a man with a knife wanting to harm himself.

According to their citation for the Chief James Scullion Medal, “Both EMTs took heroic action, using their training and compassionate hearts to calm the patient and remove the danger.”

Both then provided the man with pre-hospital care and took him to a hospital for further evaluation and the appropriate assistance.

The medal is awarded to EMS personnel for dedication and commitment to excellence.

FF Michael Murray of Astoria was assigned to the inside team for Ladder Co. 34 in Manhattan when the unit responded to a fire in a high rise last Sept. 5.

Lt. George Diaz, Murray and FF Gerardo Urena immediately made their way to the 30th floor, where 911 calls said people were trapped. They found several people in the hallway who were in the process of evacuating, and had to assist a woman who was crouched over and gasping for air.

Forcing their way into the burning apartment, they found not only clutter but signs that multiple fires had been deliberately set.

Hoses still had not arrived when the three heard cries for help from beyond what was described as a wall of fire. Murray’s handheld extinguisher would have appeared to be no match for the flames, but he enabled all three to get through. Diaz found an unconscious girl and Murray found an unconscious woman. Shielding them from the fire, the three retraced their steps back to the door and followed the voice of FF Glenn Perry about 50 feet to a stairwell. Murray and Diaz carried the victims down to the 28th floor, where they were met by EMS personnel.

Murray received the Edith B. Goldman medal for “His courage, tenacity and brute strength” that saved the woman’s life. Diaz and Urena also received medals for their actions.

When Covid-19 struck New York City, the National Ambulance Contract, under the auspices of the Federal Emergency Management Agency, brought desperately needed help in the form of 120 ambulances and more than 240 paramedics and EMTs ready to join the FDNY’s Emergency Medical Services in the fight.

The challenge arose to incorporate the new units — some staffed by people who had never been to New York City — into the 911 system.

EMT Edward Pearce, a Queens Village resident and FDNY dispatcher, was given the Lt. Kirby McElhearn Medal for his efforts to work with and support the reinforcements. McElhearn was a pioneer in EMS field telecommunications.

Many NAC members sought Pearce out after their shifts to thank him. He also received accolades from NAC supervisors.

On May 31, 2020, Engine Co. 298 and Ladder Co. 127 of Jamaica responded to a series of rubbish fires. All were small nuisance fires — until one extended to a home with residents, including a 3-month-old infant, inside.

In examining the evidence, Fire Marshals Christopher Lucarelli and John Manning determined that the incidents could be related to a series of similar fires in the previous weeks. Lucarelli asked Engine 298 and Ladder 127 to apprise him of any similar incidents.

He was canvassing the neighborhood for surveillance videos when Engine 298 informed him the NYPD was holding a man suspected of trying to set fire to a tire store. After a number of interviews, Lucarelli confronted the suspect with multiple surveillance videos implicating him for setting numerous fires, and eliciting a confession.

Checking further, Lucarelli discovered the man had been interviewed in 2006 during the investigation of a fatal fire in the Bronx. He subsequently was charged with murder for that fire as well as multiple counts of arson, criminal mischief and reckless endangerment in Queens. Lucarelli was awarded the Deputy Commissioner Christine R. Godek Medal for distinguished work in the investigation of arson.

Upon arrival, the fire was so intense it prevented firefighters from entering until Engine 302 could ready its hoses; and had already burned through the exterior walls of the second story.

And a frantic woman told firefighters that children were inside on the second floor.

While connecting to a hydrant, FF Christopher Cavalcante of Engine 302 provided his hose team with booster water from engine’s tank, allowing them to spray the front of the house and force their way in to clear a path for Ladder 155. Lt. Gregory Damato of Engine 302 felt the ladder company’s inside team pass him and go upstairs as he and his crew pushed deeper into the ground floor.

The nozzle team, led by FF Kerron Ware, fought flames in the rear of the house before dropping back to make sure no pockets of fire would spring up behind them.

Firefighters had begun rescue operations and Damato sent FFs James Terry and Christopher Armstrong upstairs to assist 155 in evacuating two victims. As Damato reached the second floor, fire was spreading rapidly from the front room into the hallway. His team helped free and evacuate a third victim.

Ware brought the hose line to the second floor to extinguish the front room. When heavy black smoke was being forced outside from the top floor under pressure, orders came from Battalion 51 to abandon the attic — where a member of Ladder 155 already had gone. They advanced through heavy fire to cover his retreat.