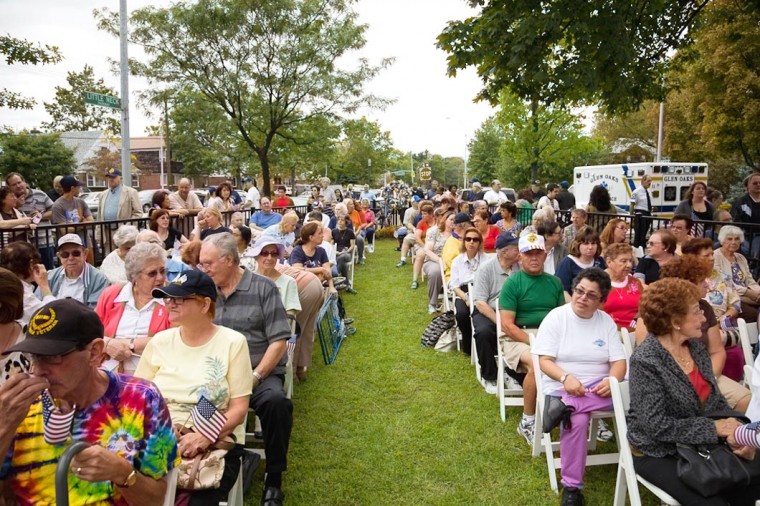 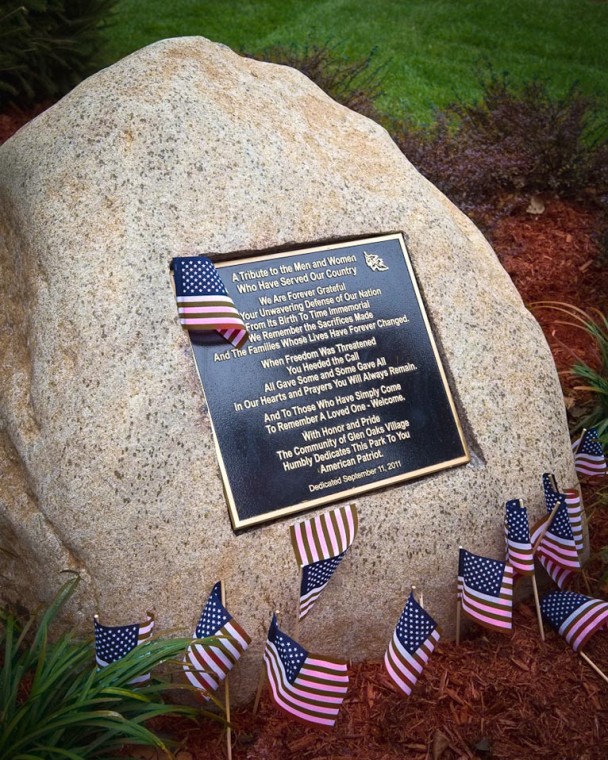 The monument with a bronze plaque in Glen Oaks that honors the armed services.

The monument with a bronze plaque in Glen Oaks that honors the armed services.

Residents of the Glen Oaks Village co-op, who built their own mini-park on Little Neck Parkway and 75th Avenue, dedicated it Sunday to members of the armed forces and those who lost their lives on 9/11.

Co-op President Bob Friedrich got the idea to establish the site and several residents recently labored for days creating the area known as Tribute Triangle Park. It features a 30-foot-high lighted flagpole, benches, landscaping, brickwork, fencing and a bronze plaque affixed to a boulder paying tribute to the armed forces.

The project cost $25,000 and Friedrich said he was indebted to the businesses that provided free labor, plants, the plaque and other assistance. They include DeBenedettis Landscaping, Keil Brothers Nursery, Trinchese Iron Works and East Meadow Sign-A-Rama.

“Ourtribute was unprecedented in that it was done without politicians or taxpayer funds,” Friedrich said.“Although it sits on Glen Oaks property, it is our gift to the community-at-large in which I and so many of my fellow civic leaders have worked hard improving the quality of life.”

An estimated crowd of 450, who were given small American flags, gathered in the park and spilled out onto the sidewalk. Invocations were given by religious leaders from area churches, a synagogue, an Islamic center and a Sikh Gurdwara.

One of the memorial organizers, Roseann Ciaccio, did a special reading of “The Star Spangled Banner.”

Area firefighters observed the event as did members of the Glen Oaks EMS. All were in uniform.

Friedrich talked about Andrew Brunn, who grew up in Glen Oaks and was a Fire Department trainee killed in the WTC disaster. A former police sergeant, Brunn, 28, was last seen helping a woman in a wheelchair down from the 35th floor of the north tower. They had made it to the 5th floor when the tower collapsed.

At the end of the ceremony, those in attendance were asked to plant their small flags in the ground near the memorial boulder.

Following the ceremony, Friedrich received numerous compliments about the new park, which the co-op will maintain.

Christine Bergen called the triangle beautiful. “I had tears in my eyes with the emotion I felt,” Bergen said.

Justin Conklin said he was “blown away” by the ceremony. “The park is beautiful and shows how much work went into putting all the pieces together.”

Richard Hellenbrecht, of nearby Bellerose, who is a member of Community Board 13, said the event “made us all very proud.” Hellenbrecht called the monument “gorgeous” and a great way to honor those who have fallen and military veterans.