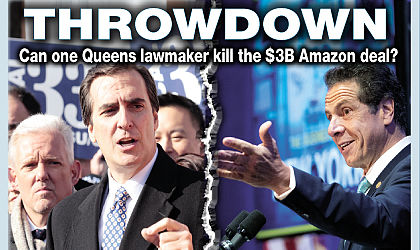 Gov. Cuomo, right, is suddenly in an awkard spot. State Sen. Mike Gianaris, near left, the most prominent anti-Amazon politician in the state, got the leverage this week to veto it singlehandedly. He is joined here by Councilman Jimmy Van Bramer, also an Amazon opponent. 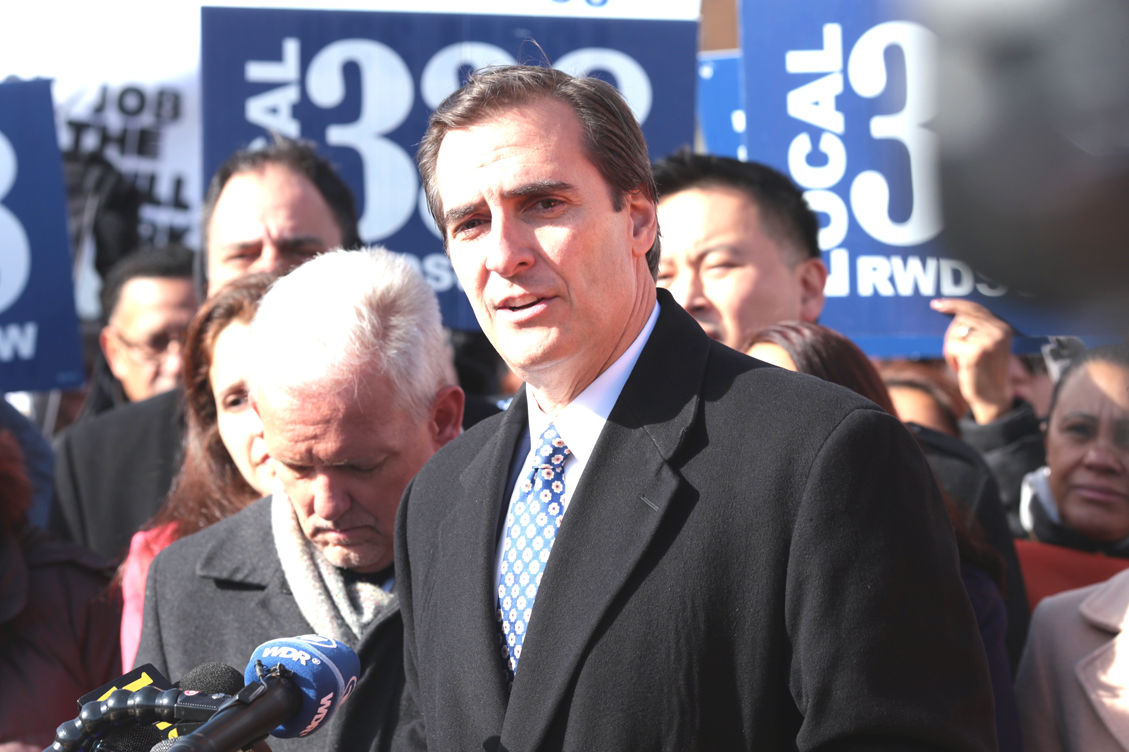 State Sen. Michael Gianaris is at the center of a political fight with huge consequences for the HQ2 deal.

Gov. Cuomo, right, is suddenly in an awkard spot. State Sen. Mike Gianaris, near left, the most prominent anti-Amazon politician in the state, got the leverage this week to veto it singlehandedly. He is joined here by Councilman Jimmy Van Bramer, also an Amazon opponent.

State Sen. Michael Gianaris is at the center of a political fight with huge consequences for the HQ2 deal.

A political battle brewing in Albany threatens to derail the HQ2 plan.

State Sen. Michael Gianaris (D-Astoria), one of the most vocal critics of New York’s deal to bring Amazon to Long Island City, was recommended by his chamber to represent it with a voting position on the Public Authorities Control Board, a state panel that could potentially kill the plan.

And Cuomo, who negotiated the HQ2 deal with Mayor de Blasio, now must decide to approve or deny the appointment.

The conflict represents a rift between the Democratic governor and the party’s new majority in the state Senate, where Gianaris is deputy leader.

History shows why Cuomo would worry.

More than a decade ago, the PACB stopped Mayor Michael Bloomberg’s plan to build a football stadium on the West Side of Manhattan. All of its voting members must decide in favor for a project to be approved.

Grassroots progressive groups like Make the Road New York, the New York City chapter of the Democratic Socialists of America and New York Communities for Change are calling on the governor to allow Gianaris the position.

Cuomo, asked during two radio interviews on Tuesday how he would decide on the PACB appointment, did not give a yes-or-no answer.

But he did make amply clear that he is not happy with Albany’s upper chamber recommending him to the panel.

Speaking to WNYC’s Brian Lehrer, the governor accused Gianaris of political expediency and the Senate of “playing politics here.” Cuomo pointed to the jobs HQ2 would create — at least 25,000 — and $27 billion in tax revenue it is expected to bring the city and state over 25 years.

In November, he was talking about HQ2 with Lehrer and said, “The state, through Empire Development Corp., will do a project plan that will be approved by” the PACB.

In his Tuesday interview with the WNYC host, though, Cuomo had a different take.

“I don’t even know, depending on the exact design of the transaction will depend on the approvals we need,” the governor said.

Despite the pressure from the state’s top Democrat, Gianaris shows no signs of caving.

“What I have said is this deal is so bad that I don’t want to use this deal as the subject of a negotiation that we can tweak or amend and end up with a final product,” the senator said in a Tuesday interview with Cheddar TV.

He and other HQ2 foes blast the $3 billion in incentives New York used to lure Amazon, whose CEO is the richest man in the world.

They also have concerns about how the project would impact affordable housing and the already-overburdened subway system. Critics also bring up Amazon’s relationship with Immigration and Customs Enforcement and the company’s history of staunch opposition to its workers organizing.

“What we’re saying to them is an anti-union pro-ICE corporation isn’t welcome here,” said City Councilman Jimmy Van Bramer (D-Sunnyside), one of the leaders opposing the deal.

Amazon has not publicly shown openness to budging on major points invoked by critics.

And the critics show no signs of slowing down. Queens Neighborhoods United, Jews for Racial and Economic Justice and other activist groups are planning to canvass and distribute flyers throughout western Queens “No Amazon Day of Outreach” action on Saturday.

The HQ2 deal has a long list of backers, too. Supporters include the Queens Chamber of Commerce, the Real Estate Board of New York, the nonprofit group Tech:NYC and CUNY Board of Trustees Chairman William Thompson Jr. Area businesses like Silvercup Studios and the Manducatis Rustica restaurant are also in favor.

“It totally changes the landscape of tech for the East Coast, New York City and in particular, Queens County,” Queens Chamber of Commerce President and CEO Thomas Grech told the Chronicle. “And I truly hope that our elected officials can look past the initial rollout of the Amazon announcement and come together and support this job creation opportunity.”

In response to criticism of Amazon’s record of fighting attempts by employees to organize, Grech pointed to how some other major corporations do not allow their tech workers in New York City to unionize. Plus, he added, the e-commerce behemoth is expected to use union workers for the HQ2 construction.

In its quest to win hearts and minds for HQ2, the company has started a program to hire NYCHA residents. Additionally, more than 130 high schools in the city have signed onto its Amazon Future Engineer program, which teaches computer science skills.

It also sent fliers to residents all over Queens that urged them to tell their representatives they support HQ2. The senator was specifically mentioned on some of them.

In 2017, Gianaris, Van Bramer and dozens of other elected officials signed a letter urging Amazon to set up its second headquarters in Long Island City.

But the two western Queens lawmakers have since said they put their names on the missive in support of the potential new jobs Amazon could bring, not to invite the kind of deal that Cuomo and de Blasio would ultimately negotiate with the company.

Despite Cuomo’s charge of Gianaris being politically expedient, a Quinnipiac University poll published in December found that 60 percent of Queens voters approve of the e-retail giant establishing part of its second headquarters in Long Island City and 26 percent disapprove it. For the city in general, the poll found that 57 percent of voters support it and 26 percent do not.

On Tuesday, an Amazon-commissioned poll by market research company HarrisX was released. It said 69 percent of voters in the city support Amazon “locating one of its new headquarters” in the western Queens neighborhood and 19 percent disapprove it.

One hundred and seventy voters in Gianaris’ district were also polled for the latest survey. Of that group, 77 percent were found to approve of HQ2 being established in Long Island City and 19 percent to disapprove of it.

Council Speaker and Acting Public Advocate Corey Johnson (D-Manhattan), a critic of the deal, blasted the new poll on Twitter.

Van Bramer’s district largely overlaps with Gianaris’. And despite the polling numbers’ message, the councilman said his constituents seem to be sending a different one.

“Seventy-four percent of those 277 people who have actually contacted my office on this issue are against the deal,” he said.

Three percent of the constituents who reached out said they were unsure about the plan and 23 percent were in support of it, according to the councilman.

Van Bramer called the new survey a “joke.” He charged Amazon “paid for a poll that would come back with the result that they wanted.”

The company declined to comment in his response to his remarks. The Chronicle could not get a statement from HarrisX before deadline.