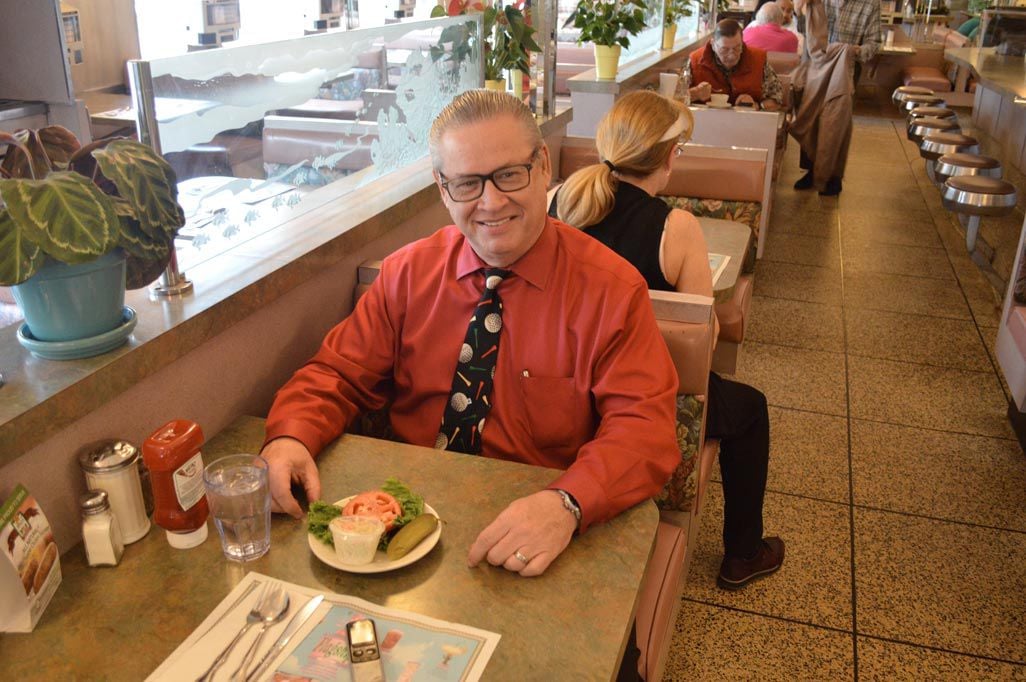 Vincent Pupplo is co-owner of the Flagship Diner in Briarwood, one of the borough’s best places to order some classic American food, like a cheeseburger and a milkshake. 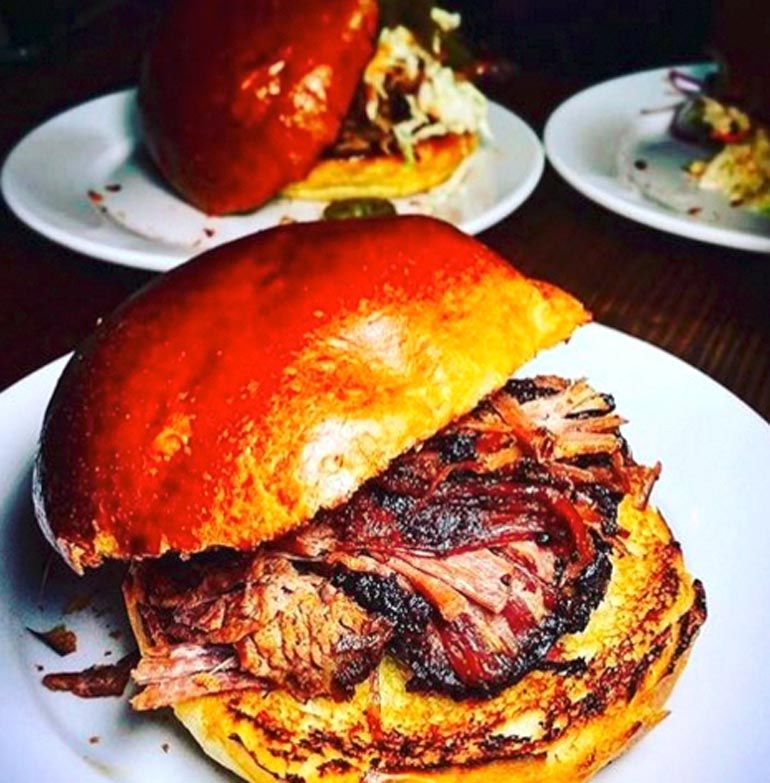 Queens is full of fine American food. The beef burnt end sandwich at Butcher Bar in Astoria is a great version of the Kansas City barbecue dish.

Vincent Pupplo is co-owner of the Flagship Diner in Briarwood, one of the borough’s best places to order some classic American food, like a cheeseburger and a milkshake.

Queens is full of fine American food. The beef burnt end sandwich at Butcher Bar in Astoria is a great version of the Kansas City barbecue dish.

It’s easy to forget when you’re in its most insular enclaves. But from Long Island City to Little Neck, Queens is loaded with high-caliber American food. And though around half of the people here are foreign-born, no matter which of the myriad variations of U.S.-bred food you love — soul food, Kansas City barbecue, New England seafood — it’s never too far.

The Flagship Diner in Briarwood is a great point of departure. “A cheeseburger deluxe and a chocolate shake,” Flagship co-owner Vincent Pupplo told the Chronicle, “is about as American as you can get.”

The diner has a sinful strawberry cheesecake and a terrific version of another classic American treat, the popover, which essentially is a U.S. version of Yorkshire pudding.

To truly replicate great diner food is a tall order. But according to Pupplo, amateur chefs interested in making the best American food don’t have to go too far: Just head to your traditional supermarket.

“The same ingredients you’re using at home is what we’re using here,” the diner-runner said. “It’s just knowing how to do it.”

Cooking experience cannot be bought. But excellent meat for diner-style food and another great food tradition in America, barbecues, can. One name on a very long list of top-notch meat stores, Astoria’s International Meat Market, sells great ground beef and steak for you to grill on July 4.

Those on the western side of south Queens don’t have to go far for a great diner. Another beloved bastion of U.S.-bred grub operates in Howard Beach: The Cross Bay Diner. Open around the clock, it offers plenty of stellar options for breakfast, lunch and dinner.

If you’re a foodie who likes your burger with a little more than just cheese, lettuce and tomatoes, Cross Bay Burger might be your speed: It has a splendid mix of mushrooms, peppers, sauteed onions and mozzarella cheese. The grilled cheese is also a great choice.

Eggs Benedict, also on the menu at the Cross Bay Diner, is one of New York City’s greatest concoctions. And though its Manhattan origin is widely accepted, a 2007 New York Times investigation found competing theories of provenance. In a popular one, a hungover Wall Street broker unwittingly authored the dish when he ordered buttered toast, two poached eggs, a hollandaise sauce pitcher, bacon and an eggs-based sauce with vinegar, lemon and butter flavoring in 1894.

Between Queens in 2017 and the time that humans started living in what is the United States today, the style of food in this land has irrevocably changed. According to a summary of the history of American food by Karen Carr of Portland State University, Native Americans mostly ate squash, corn, beans, wild berries and nuts along with whatever meat they could get their hands on before they were colonized.

European conquerors, Carr said, introduced cows, sheep, pigs and chickens and also ate the indigenous population’s cuisine. In the centuries since then, immigrants from all over the world have brought foods with them that have been incorporated into what is called American cuisine today.

Many of the world’s finest foods were born in the United States. Its origins in the American South, soul food is a tradition that blacks brought with them up north during the Great Migration. To many African Americans, soul food like fried chicken and collard greens are synonymous with community and togetherness.

Southeast Queens has no shortage of the stuff. At the Burgandy Cafe in Jamaica, you can get Southern fried wings, collard greens and macaroni and cheese. Another solid choice is the whiting sandwich on coco bread.

If you’d rather get some good barbecue food at a restaurant in Queens than fire up the grill on Independence Day, it would be a good idea to check out Butcher Bar’s location in Astoria.

According to its owner, Matthew Katakis, Butcher Bar’s food is a deliciously unique blend of regional barbecue comfort food styles. “It’s a mix of Texas and Kansas City,” he said. “We call it ‘New York City barbecue.’”

He recommends the “meat candy” beef burnt end sandwich, a version of a Kansas City staple that uses meat from a smoked brisket. Other delicious American fare at the restaurant, which only uses grass-fed meat sourced locally from sustainable farms, includes the smoked and pulled pork dish and its excellent New York steak strip. Many mouth-watering pictures of Butcher Bar’s food are posted on its Facebook page.

Beyond barbecue, the Astoria restaurant has some great eats in the tradition of American comfort food, like creamy mac and cheese and cornbread with honey butter. It also does a terrific take on the Philadelphia cheesesteak, one of the most celebrated U.S.-bred foods.

Katakis believes the kind of American restaurants one can eat at in Queens has seriously changed in recent years. While it used to be mostly just simple diners where you could order a cheeseburger, he said, “American food is being taken more seriously” with the market for it growing as the borough becomes more of a food destination.

Restaurants like Butcher Bar, which “evolved not only comfort food and barbecue” but developed a unique style combining the cuisines to carve out its own niche food genre, Katakis said, are on the rise. “It’s a kind of American food that’s up and coming,” the eatery chief said.

The U.S.-style Astoria eatery is far from the only place to get a great bite to eat on the Fourth of July: the Smoke BBQ Pit in Jamaica is also a great choice. If you don’t mind messy grub, order some ribs from the Southeast Queens eatery, which also has some great pulled pork on the menu and a terrific burger.

Those looking for a quick bite of Americana would do well to go to Arby’s, which has locations in Middle Village and Fresh Meadows. The smokehouse brisket is a highly recommended choice at the restaurant, as are the milkshake and fries.

An outstanding beef brisket can be found at the John Brown Smokehouse on 44th Drive in Long Island City. The eatery’s barbecue options include rib tips and pork belly.

Unlike the Eggs Benedict’s creation, the Queensian genesis of Little Neck clams is a clear tale. While they were native to the area, the Queens Library says a Danish sailor in the 1860s planted additional clam beds at Little Neck Bay to rapidly increase yield.

They were served in fine restaurants in the five boroughs and major European cities. But in the 1890s, pollution from the city decimated the business.

More than a century later, though, the name has stuck. Little Neck clams — small ones that, in groups or seven or 10, make a pound — are a seafood staple. You can order them at places such as the CrabHouse Restaurant in Long Island City. The eatery, which is near the waterfront, also sells classic American seafoods like crabcakes and oyster Rockefeller, a dish named in 1899 for its richness; the monopolist was America’s wealthiest man then.

London Lennie’s in Middle Village is another fine location for food from the sea. Among its great U.S.-bred dinner options are the housemade Maryland crabcakes, the Alaskan red king crab and the fresh shelled New England lobster salad.

No article about food in the U.S. would be worth its salt without giving some ink to that most iconic of American foods, apple pie. And there may be no better place to get a taste of it than Martha’s Country Bakery, which has locations in Astoria, Bayside and Forest Hills. Martha’s variations of the treat — apple crumb, sour cream apple and apple blueberry — also come highly recommended.

Although synonymous with the United States, apple pie is not indigenous to it. And the only apples native to America are the crab variety, according to the blog Today I Found Out. European cultures, the website said, that relished the dessert brought it to America during the 17th and 18th centuries, taking the seeds with them.