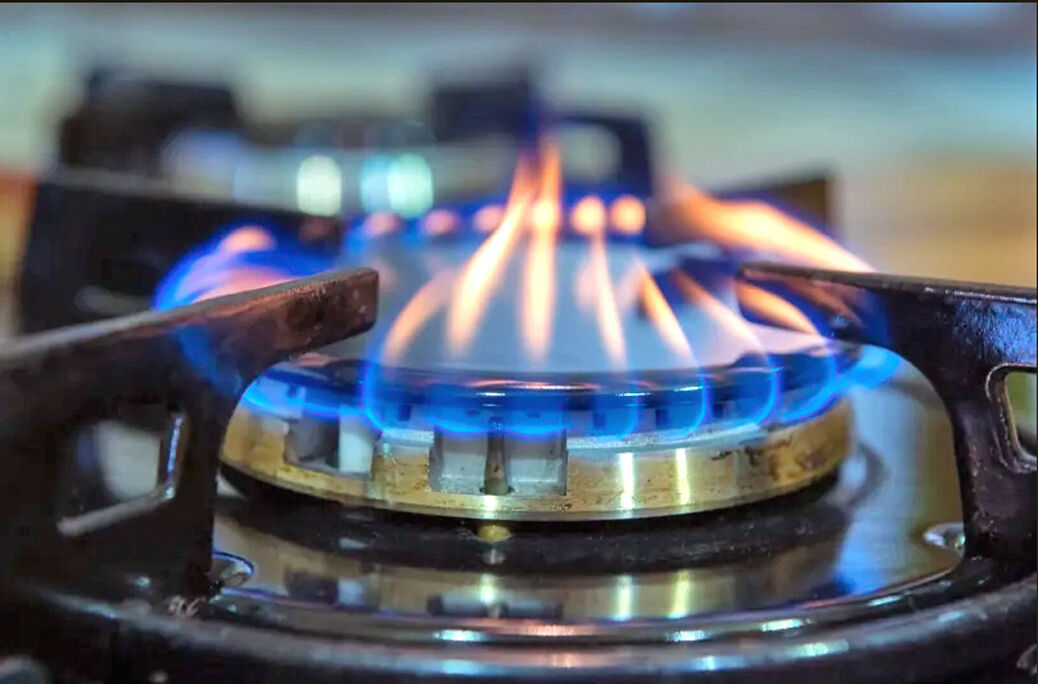 The City Council banned gas in many new buildings in New York City starting in 2024. 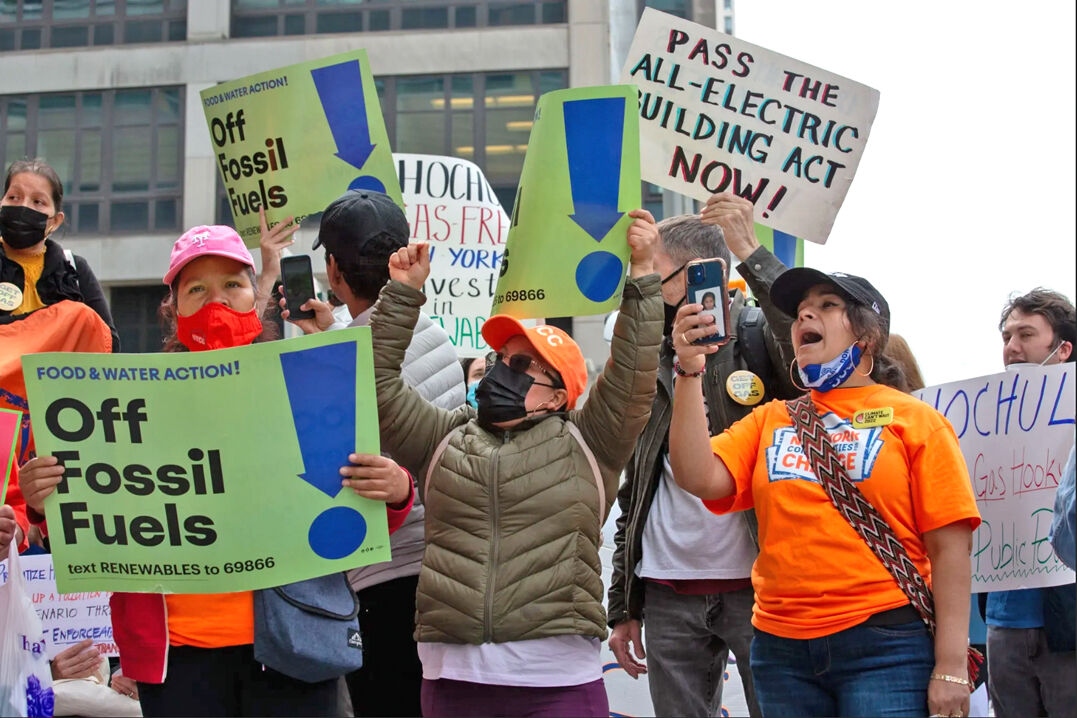 Environmental activists rally in Downtown Brooklyn in support of limiting gas in the state’s climate plan, May 3, 2022.

The City Council banned gas in many new buildings in New York City starting in 2024.

Environmental activists rally in Downtown Brooklyn in support of limiting gas in the state’s climate plan, May 3, 2022.

A simmering debate over gas stoves boiled over recently.

A federal agency suggested last week that the use of gas appliances should be cut off, and the response got superheated across the country. But in New York, the idea isn’t new.

Two years ago, the City Council moved to prohibit installation of gas stoves in new buildings. Earlier this week, the governor proposed more regulations as part of efforts to fight climate change.

Here’s what you need to know about the issue — and how to ditch your gas stove, if you choose:

Gas stoves can pollute a home’s indoor air by releasing high levels of nitrogen dioxide, plus particulate matter and carbon monoxide. Even when turned off, gas stoves have been found to leak methane, a potent greenhouse gas that warms the planet.

Exposure to such pollutants can lead to negative respiratory and cardiovascular health outcomes. One 2013 study estimated that kids who grow up in homes with gas stoves are 42 percent more likely to experience symptoms of asthma than kids in homes with electric stoves.

In New York, 18.8 percent of childhood asthma cases might be prevented if households didn’t have gas stoves, according to a study published in December.

Given these health impacts, the U.S. Consumer Product Safety Commission is interested in reducing “indoor air quality hazards,” including those that come from gas stoves, according to a statement from the commission chair. The CPSC does not currently regulate gas stoves, and there is certainly no ban in the works.

What’s the latest on gas stove

And can I keep my existing one?

In a few years, new buildings in New York City won’t be allowed to feature gas stoves in kitchens, or any other appliances powered by fossil fuel.

The City Council in 2021 passed a bill that effectively bans gas in new buildings, starting in 2024 for those under seven stories and in 2027 for anything taller. It’s an effort to slash greenhouse gas emissions, which exacerbate climate change.

But there’s nothing in the law that would rip gas stoves out of the kitchens where they’re already installed.

At the state level, Gov. Kathy Hochul recently backed a similar ban on fossil fuels in new construction, as outlined in the annual State of the State address on Tuesday. Beginning in 2025 for smaller buildings and 2028 for larger ones, it is an effort to zero out greenhouse gas emissions in that sector, Hochul said.

The governor also wants to prohibit the sale of heating equipment that burns fossil fuels — by 2030 for smaller buildings and 2035 for larger buildings. But that proposal does not apply to gas stoves, according to Hochul spokesperson Katy Zielinski. That means restaurants that pride themselves on flame broiling don’t need to immediately worry, according to reporting by Eater NY.

I have a gas stove now,

but I’d like to try something else. What can I do?

If you own your home or apartment, you can replace your gas stove with an electric one or an induction stove, which uses a magnetic current to produce heat.

Seth Frader-Thompson, president of the tech company EnergyHub, converted his entire Fort Greene townhouse to electric, from the stove to the home’s heating. He and his wife cook a lot, Frader-Thompson said, so he worried he wouldn’t like the experience of using an induction stove, but now he’s sold.

“Your ventilation needs for your range hoods are much lower. The amount of heat that you feel as you’re cooking is much less. The cleanup is much easier,” he said. “In the end, it really feels like there was no downside whatsoever to switch.”

Frader-Thompson recommended going to appliance showrooms to get a feel for induction stoves in person. Some salespeople will let you boil a pot of water to test it out.

There is a learning curve when it comes to cooking food. Everything heats up a lot faster compared to gas, for example.

NYCHA tenant Shavon Marino last year received an induction stove in her Bronx apartment as part of an experiment to test indoor air quality, as THE CITY previously reported. She had to get used to cooking with it, but now she’s a pro.

“Since the stove has been in my life, I’ve been so much happier coming home. I can cook better,” said Marino, who made Thanksgiving dinner for eight people. “It’s so easy. I love it. I never want to go back to a gas stove.”

How do I actually swap a range out?

If you have not worked with electricity and gas before, definitely call a professional to remove your stove and install a new one. Check to see what options the appliance store has for delivery and disposal of your old stove.

Be aware that you may need to upgrade your home’s electrical system to be able to handle a new electric range. This may be more complicated in a multifamily building, and the effort may require getting the support of your neighbors or co-op board.

You can start by making sure you have a 220/240-volt outlet that can support an electric stove. An electrician can do this easily. You may have to hire an electrician to increase the capacity from the U.S. standard 110/120-volt outlet. You also may want to call your gas utility company to shut off gas service after the stove is installed — though Frader-Thompson, who used a contractor, didn’t do this.

“Just in case we hated the induction stove, we ran a gas line behind the stove,” he said. But he doesn’t think his family will ever use it.

But I’m a renter.

What are my options?

Though renters can’t necessarily just haul out the gas stove from their unit without permission from the landlord, tenants can always request an electric replacement if a gas stove dies.

And renters can buy an electric or induction plug-in cooktop to use instead of relying on a gas stove — though you may have to keep an eye on your electricity use.

Take Shay O’Reilly, an organizer for the environmental nonprofit Sierra Club who lives in Flatbush, Brooklyn with his husband and daughter. His pre-war apartment has a gas stove, but he hasn’t used it for months. This past summer, he bought a two-burner induction range and a toaster oven that fits a 9-by-13-inch pan. He turned off the valve connected to the gas stove and set a counter slab over the burners.

“The one annoying thing about our setup is that we can’t have on the electric kettle and the toaster oven at the same time. It’ll short the circuit,” O’Reilly said.

But he has no other complaints. Making the switch, which cost about $200, hasn’t stopped him from baking whole roast chicken, birthday cake, peach pie and batches of muffins and brownies, he said.

He noticed the kitchen doesn’t get as hot when he’s cooking, and feels better about his toddler getting involved in food prep.

“Not having the fire there makes it a lot safer to have her help us out,” he said.

Andres Salomon, a stay-at-home parent and former computer programmer, swapped out his gas stove for an induction stove when his family bought a home in Forest Hills about two years ago. He suggested purchasing a smaller induction burner, like O’Reilly’s, to get a feel for the difference if you’re not sure you want to dump your gas stove.

“You can just try it out and you won’t have to change the wiring or anything. Just put it on your countertop and plug it in,” Saloman said. “It’s kind of like a hot plate. You can test out your pots and pans to make sure they work.”

How much will this cost me?

The cheapest induction stoves can cost around $1,000. One survey of 90 people found the average price to be about $2,200.

A new electric or induction stove could become much cheaper with the $433 billion federal Inflation Reduction Act, passed last year. The legislation includes $4.5 billion for states to give rebates when buying electric appliances, so you could qualify for up to $840 on a new stove. More tax credits are available for upgrading a breaker box or electrical wiring. A calculator at rewiringamerica.org/app/ira-calculator can give you a sense of what you may qualify for.

The New York State Energy and Research Development Authority said it will distribute those funds once the federal Department of Energy allocates them.

Jeffrey Weber, a property manager at Weber Realty Management, which has a portfolio of 40 buildings in Manhattan and Brooklyn, told THE CITY it’s often cheaper and faster to upgrade the electrical system than to upgrade gas lines when they fail the required inspections. Because of that, he’s been encouraging the multifamily complexes he works with to get off gas.

Weber said he tells condo and co-op boards that “the regulations concerning gas are getting stricter and stricter, and the upkeep for the gas lines will be prohibitively expensive, so it’s best to bite the bullet now.”

“THE CITY (www.thecity.nyc) is an independent, nonprofit news organization dedicated to hard-hitting reporting that serves the people of New York.”