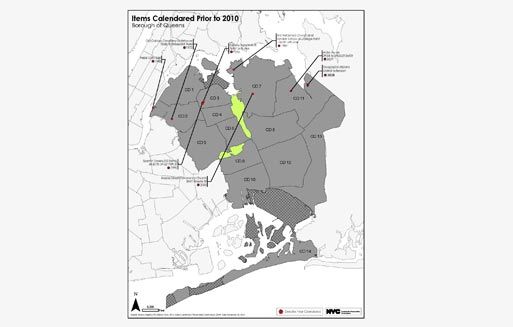 This map shows the eight sites in Queens that were on the docket for protection by the city Landmarks Preservation Commission, including the Bowne Street Community Church in Flushing and the Ahles house in Bayside. The LPC plans to wipe out the list on Tuesday. 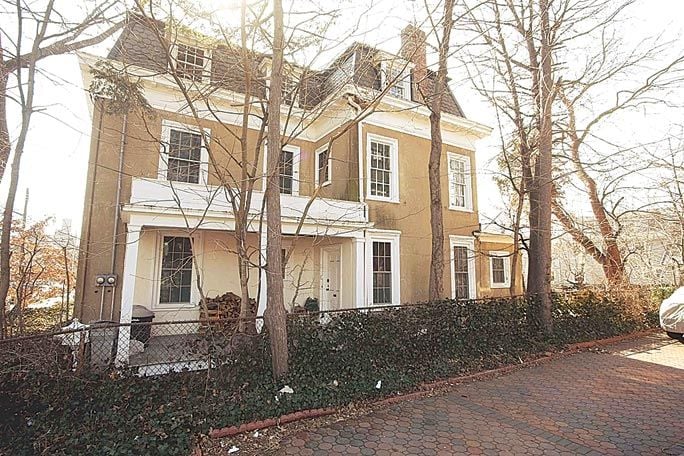 The Ahles house, built in 1873 in Bayside, has been ready for landmarking since 2009. The Landmarks Preservation Commission will vote Tuesday to eliminate it and other sites.

This map shows the eight sites in Queens that were on the docket for protection by the city Landmarks Preservation Commission, including the Bowne Street Community Church in Flushing and the Ahles house in Bayside. The LPC plans to wipe out the list on Tuesday.

The Ahles house, built in 1873 in Bayside, has been ready for landmarking since 2009. The Landmarks Preservation Commission will vote Tuesday to eliminate it and other sites.

Preservationists are worried that the city’s plan to eliminate nearly 100 historic buildings and districts — including eight in Queens — from the landmarking process will be a major setback for saving many of the locations.

Landmarks Preservation Commission Chairwoman Meenakshi Srinivasan indicated last week that the commission will vote on the proposal next Tuesday. There will be no hearing.

The goal, according to published reports, is to clear the decks of sites that have been languishing at the LPC for five years or more. Those opposing the plan say it will leave vulnerable sites open for development.

The 94 buildings and two historic districts have all been calendared, which means the LPC has looked at the requests and deemed them worthy enough to be placed on the agenda for future action.

While calendared, a property receives some protection since it cannot be altered or razed until the changes are reviewed by the LPC. If no decision is made following a hearing, the site is still deemed worthwhile.

However, sometimes due to political pressure, the locations remain on hold for decades. Paul Graziano, a zoning and historic building consultant from Flushing, said that was the case with former City Councilman Dan Halloran (R-Whitestone), who did not support two sites in his district.

The locations in Queens to be decalendared include six buildings, an iconic sign and a district. They are:

• Ahles house, built in 1873 by Bayside pioneer Robert Bell as a wedding present for his daughter. It’s been on the LPC docket since 2009 and wasn’t supported by Halloran;

• Douglaston Historic District Extension with 20 buildings including a school, a church and 17 private homes, some dating back to the mid-1800s. It’s been on the calendar since 2008 and wasn’t supported by Halloran;

• First Reformed Church of College Point, which was built in 1873 and has been on the calendar since 1980;

• Bowne Street Community Church in Flushing, which was built in 1892 and features Tiffany stained-glass windows. It’s been calendared since 2003;

• Fairway Apartments in Jackson Heights, built in 1937 in the Tudor Revival style. They’ve been calendared since 1990;

• Spanish Towers in Jackson Heights, made up of five three- and four-story attached- and semi-detached homes with covered terraces and terra-cotta roofs. Built in 1927, they’ve been calendared since 1990;

• The Pepsi-Cola sign on the Long Island City waterfront, which was erected in 1936 by the soda company, which had a plant there. It’s now part of the Queens West development. Calendared since 1988; and

• Old Calvary Cemetery Gatehouse, a large brick structure in Maspeth, built in 1892 and calendared since 1973.

Kevin Wolfe, a founder and board member of the Douglaston and Little Neck Historical Society, called the LPC’s proposed action “tragic,” saying, “People spent time researching sites all over the city. It’s really bad for Queens and the rest of the city.”

He doesn’t know how the LPC will proceed in the future, but he fears the sites in jeopardy “will never be considered again.”

State Sen. Tony Avella (D-Bayside), who has four of the locations in his district and fought in the past for landmarking the Ahles house and the Douglaston district extension while a city councilman, said the LPC’s decision “is outrageous,” in a letter to Srinivasan and the mayor.

He wants the city to suspend its plan and allow the public to give input on the sites. “Many of these landmarked applications remained dormant because the applicants lacked support from the previous administration,” he wrote.

Graziano said that although it would be possible for the LPC to recalendar a location, “It’s not an easy thing to do and it’s so hard to get anything landmarked.”

The most at-risk locations in the city, according to Graziano, are the residences and the Douglaston District extension.

He noted that the Ahles house in Bayside is located in an R4-A zone and if not designated, the owner could tear it down and put up two two-family homes.

Cash-strapped churches often balk at landmarking because members fear it will raise the cost of renovations due to LPC requirements for exterior work, and it also forbids them from redeveloping.

Developers also oppose landmarking because it limits their expansion plans. Graziano pointed out that two years ago the Real Estate Board of New York favored several proposals that would limit the calendar time for landmarking. Though they were not approved, some of the measures mirror the LPC’s plan, he said.

Graziano and other preservationists are hoping the city will back down on its decision and are appalled that the LPC is making the decision without holding a public hearing. “It’s 50 years of policy thrown out the window,” he said.

Simeon Bankoff, executive director of the Historic Districts Council, which advocates for the city’s historic neighborhoods, called the proposal “a terrible plan.”

Bankoff is outraged that the city would consider taking such a move when it took years for preservationists to get sites on the list. “We want a transparent process and what they are proposing is ridiculous,” he added.

He believes the LPC should have an open conversation to determine if sites should continue on the list and then proceed with public hearings.

Bankoff also questions the logic of eliminating the list. “Why take the locations off the calendaring? They have all to be voted on by the LPC and they should move forward with the process.”

Calls and emails to staff members at the LPC were not answered, but a statement on its website said that the items could be recalendared by the agency in the future.