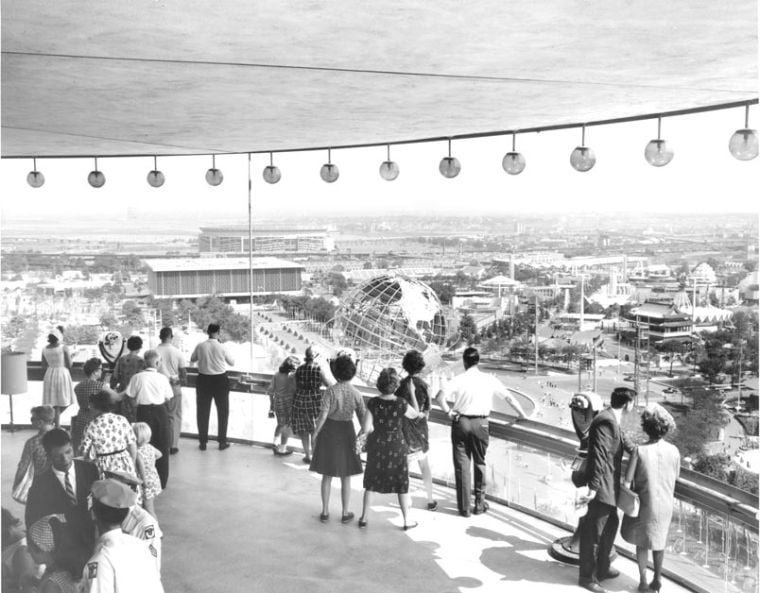 The tallest observation tower at the New York State Pavilion offered a view of the World’s Fair as well as New Jersey, Connecticut and most of Long Island. 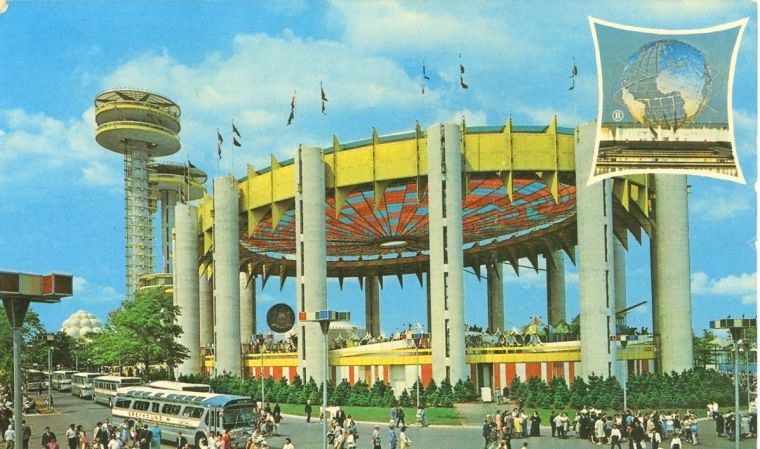 The New York State Pavilion in all its glory during the 1964-65 World’s Fair in Flushing Meadows, with the Unisphere inset.

The tallest observation tower at the New York State Pavilion offered a view of the World’s Fair as well as New Jersey, Connecticut and most of Long Island.

The New York State Pavilion in all its glory during the 1964-65 World’s Fair in Flushing Meadows, with the Unisphere inset.

One of the most highly acclaimed structures of the 1964-65 World’s Fair — the New York State Pavilion — tragically has been allowed to badly deteriorate, but the 50th anniversary of the extravaganza has brought renewed hope that things are about to change.

With the active support of Borough President Melinda Katz, a task force has been created to come up with ideas on how to raise funds to stabilize the pavilion, estimated to cost around $40 million, followed by possible reuse plans for the facility.

The pavilion, which cost $12 million to build, was designed by noted architect Philip Johnson. It includes three observation towers, the Tent of Tomorrow and the Theaterama, now the Queens Theatre.

They were among several buildings that were to be permanent structures after the fair closed and were acclaimed by the New York Times architectural critic Ada Louise Huxtable.

She went on to label the Tent of Tomorrow as “a carnival with class.” It was supported by 16 concrete columns that were 100 feet high.

The roof of the elliptical Tent of Tomorrow was made up of colorful Plexiglas tiles for the roof and was the biggest suspension roof in the world. A $1 million terrazzo floor featured a 9,000-square-foot map of the state showing every Texaco station in New York. Each of the 567 panels weighs 400 pounds.

Performances from various groups and bands were held in the Tent of Tomorrow, which also included an exhibit by the New York State Power Authority, a fine arts museum, fashion shows and a restaurant.

On the mezzanine level, visitors could meet with state legislators or stroll along a miniature highway lined with views representing the state, including a rose garden, small industries and exhibits from regional museums.

The exterior of the circular Theaterama boasted art pieces from the world’s most famous Pop artists. One by Andy Warhol showing mug shots of most wanted criminals was too controversial for Gov. Nelson Rockefeller, who had it removed before the fair opened. It was an election year and he feared a loss of votes from Italians.

Inside the theater, movies were projected onto a 360-degree screen, showing popular state sights such as Niagara Falls and Jones Beach.

The literal high spot of the fair was atop the tallest of the pavilion’s three observation towers. Its height at 226 feet was set by federal aviation officials because of the fairground’s proximity to LaGuardia Airport.

“Sky-Streak” capsule elevators brought visitors up the sides of two of the towers from which New Jersey, Connecticut and most of Long Island could be seen. The middle tower featured refreshment stands, while the shortest was used as a lounge for visiting dignitaries.

After the fair closed, the Tent of Tomorrow was used for public concerts and featured such performers as The Grateful Dead, Led Zeppelin and Steppenwolf. An estimated 5,000 fans attended the Grateful Dead show.

From 1972 to 1974 the facility was used as a roller skating rink. By the mid-1970s, the tent’s panels started to fall and posed a safety risk. Instead of fixing the unique roof, the city removed the Plexiglas, starting a major deterioration of the terrazzo floor.

The pavilion has been closed to the public since 1976, and the weather has taken its toll on the floor map. Some areas are totally obliterated while others are crumbling.

In 2007, a project to restore and preserve parts of the floor was undertaken by the Parks Department and the University of Pennsylvania’s Architectural Conservation Lab under a grant from the National Endowment for the Arts. Thirteen panels were selected. Five were restored and the rest kept in storage for future work.

The remaining flooring has been covered for protection.

Some of the restoration panels were on display last month when the city opened the pavilion to the public as part of the 50th anniversary celebration. Crowds totaling an estimated 2,500 people waited on line for hours to get a glimpse inside the structure.Most were enthusiastic about finding a reuse for the building.

Since 2009, a group of volunteers known as the Pavilion Paint Project has been painting the exterior base and mezzanine of the pavilion to keep it looking good. John Piro, who helped organize the supporters, worked with the city to open the pavilion last month and was thrilled with the reception.

“I am very encouraged by the support,” Piro said. “Everyone loves the pavilion and they don’t want it to go away.”

He would next like to restore one of the rooms in the base that originally served as a cafeteria or one that was an art museum.

Another more recent group is also helping to plan for the pavilion’s future. Salmaan Khan, one of the organizers of People for the Pavilion, is a member of the borough president’s task force and believes that restoring the pavilion “is just a matter of time.

“It will happen and Katz’s support is very valuable with her office providing $1 million,” Khan said.

Raising additional funds from the state and federal governments is being investigated as well as private donations.

Another bit of encouragement was announced last month by the National Trust for Historic Preservation, which named the pavilion “a national treasure,” hopefully bringing more awareness to the pavilion and opening up avenues of funding.

Earlier this year, the Parks Department held listening sessions to gather ideas from the public on what people want for the pavilion’s future. The overwhelming reaction was to preserve it.

Parks spokesman Zach Feder said his agency posted the presentation shown at the sessions on its website and received nearly 800 responses as part of an online survey. “We have also been meeting with Queens’ elected officials about funding and will hold a public meeting to follow up on the listening sessions in the near future,” Feder added.

After years of neglect, it now looks like the state pavilion may have a future after all.

This is the seventh in a series of stories commemorating the 50th anniversary of the World’s Fair at Flushing Meadows.