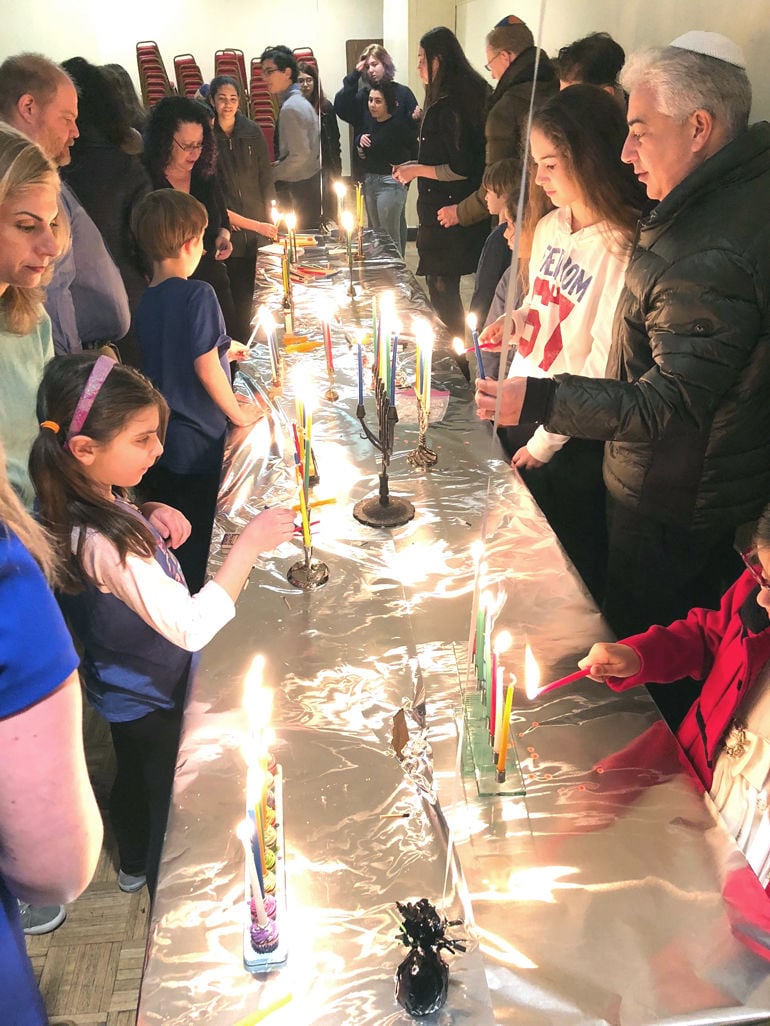 A group of people light menorahs at the Free Synagogue of Flushing, the oldest Reform congregation in the borough. 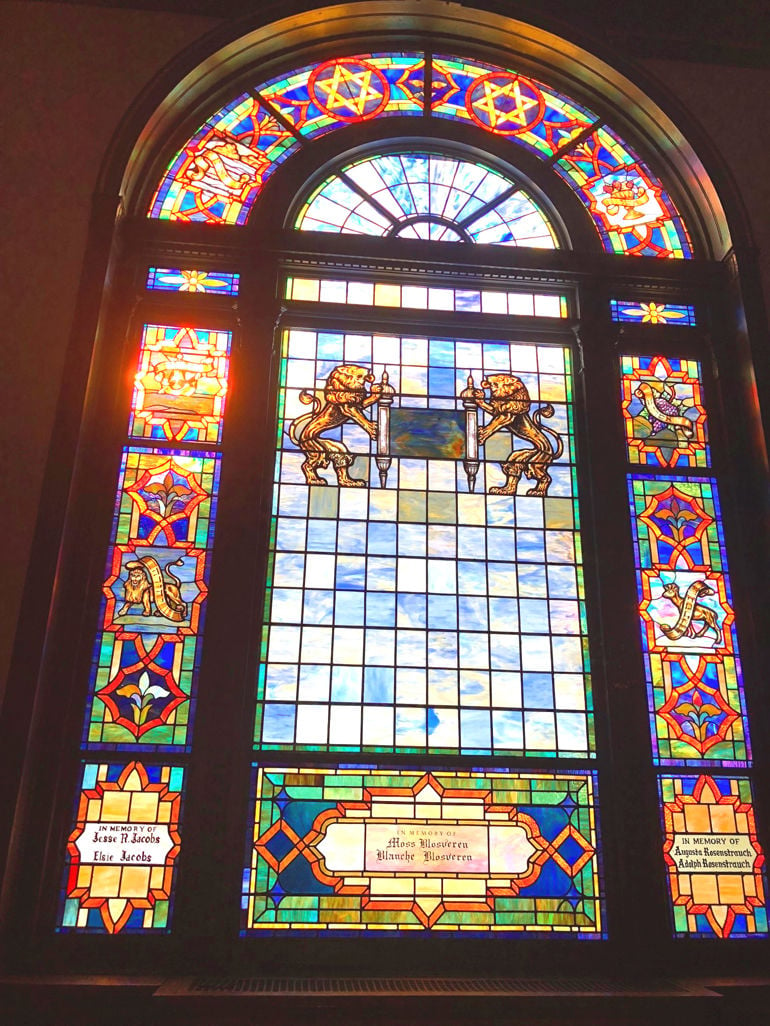 A stained glass window at the Free Synagogue of Flushing.

A group of people light menorahs at the Free Synagogue of Flushing, the oldest Reform congregation in the borough.

A stained glass window at the Free Synagogue of Flushing.

As demographics in Queens have changed in recent decades, many synagogues have been forced to permanently shut their doors. But not all.

Today, Flushing is known for its large and bustling Chinatown and Koreatown. But through the years that would see the Asian population increase and ultimately become the neighborhood’s majority group, the Free Synagogue of Flushing has been serving the community

Established in 1917, it’s been around longer than any other Reform congregation in Queens. The Hebrew Women’s Aid Society established the synagogue, whose house of worship is on the state and national registers of historic places. According to FSF Director of Community Relations Souksavat Soukhaseum, the society hadn’t originally set out to create it: It aimed to raise $500 to start a religious school. But after collecting $1,500, they opened both the school and the synagogue.

And having celebrated its centennial last year, the FSF’s leadership is confident about thriving through the next hundred years.

“Most synagogues are either merging with one another to survive, much like churches are doing, or even worse, completely going out of existence,” FSF Executive Director Alan Brava told the Chronicle. “But the Free Synagogue has had a renaissance and it’s really poised for a second century.”

The congregation, which has 75 families, is as lively as ever. More than 40 children attend its religious school.

It’s also become a vibrant cultural institution. In February, internationally known Israeli singer Achinoam “Noa” Nini performed at the synagogue for a concert commemorating its centennial. And earlier this month, it hosted a Chinese New Year Shabbat with a dragon and lion dance performance by the Wan Chi Ming Gun Har Institute.

On May 23, the New York Cantors will have a concert at the temple celebrating its 100th anniversary.

Earlier this year, the FSF had a “bubble tea shabbat.” After services were held in the sanctuary, the congregation had a reception at which people could drink different flavors of the Taiwanese drink. According to Brava, a recent macaroni and cheese shabbat was also a big hit.

A list of upcoming events at the temple is available on freesynagogueflushing.org.

Staying active in the neighborhood community, the synagogue is a member of the Flushing Interfaith Council. And the synagogue works with the Queens Jewish Project, a group that has programming for young Jews in the borough’s western neighborhoods.

Residents from a variety of areas are congregants. Brava estimates that “perhaps 30 percent” of them live in parts of Flushing, while others reside in Jackson Heights, Woodside, Little Neck, Hollis Hills, Astoria and Long Island City.

“You hop on the 7 train, you’re here in 10 minutes,” the executive director said. The Long Island Rail Road, he added, is also an option for those traveling to the house of worship.

Keeping with the liberal Reform tradition, the temple is open to LGBTQ people. The congregation includes interracial and interfaith families.

According to Soukhaseum, an openly gay man, some of the congregants come from different Jewish sects.

“Some individuals grow up conservative or Orthodox and they find later that it’s much more convenient and accommodating to be in the Reform movement,” said Soukhaseum, who is from the Asian country Laos and was raised as a Buddhist.

Unlike some temples, service at the FSF on High Holy Days is free of charge: a policy known as “don’t pay to pray.”

Ed Schauder, a Flushing resident who married his wife at the synagogue, is its president. He works at Steiner Sports, a sports marketing firm, as general counsel and executive vice president of licensing, and told the Chronicle that he’s planning on bringing Yankees manager Aaron Boone to visit the FSF.

“What were trying to do is draw people in just to get a sense of what a Jewish experience in a synagogue is but we’re also going to turn it into a cultural hub,” said Schauder, who was recently appointed to the board of the Queens Jewish Community Council.

In terms of the big picture, he has a vision of the role he wants the synagogue to play in the borough.

“With doing programming and cultural events and concerts; the game plan is to become the 92nd Street Y of Queens,” he said, referring to the Upper East Side community center that hosts artistic events and other programs that make it one of the city’s leading cultural institutions.

And at the same time, Schauder wants the synagogue to “allow people to still have ... a spiritual Jewish experience.”

While the temple president speaks with an excited and joyful tone about the many events that the synagogue has, he remembers a time when its existence was threatened.

For years, the Windsor School had rented a building owned by the FSF. When it moved out, the synagogue took a major financial hit.

“I got called to an emergency meeting,” recalled Schauder, who did not have the title of president at that time. “It went something like: ‘Windsor left. We don’t have any money. We don’t know what to do.’”

The Flushing resident — who has professional experience as a banking and corporate lawyer — proposed a solution that involved the building that the school rented.

“I came up with this idea to do a bond offering,” he said. “We sold notes at the time secured by the building that was eventually sold.”

After the deal was approved by the office of New York Attorney General Eric Schneiderman, the building was sold last August.

Brava said the money from the sale has been extremely good for the synagogue’s finances.

“We’ve invested the money wisely to guarantee another century at least,” the executive director said.

Along with other ways of securing revenue, Schauder said, there is a creative fundraising campaign for its hundredth anniversary: “to get people in the community to make a contribution of $100 or more to be listed in the records of the synagogue as a benefactor.”

The synagogue president is also excited about a young cantor named Laura Stein who will start performing there later this year.

“We got a young superstar cantor in Laura Stein,” he said, adding that she “has a way with kids” and plays the guitar.

Overall, he says that you can count on the Free Synagogue thriving for at least another century.

“We’re laying a foundation so this place will be even more relevant than it was the first hundred years,” he said.