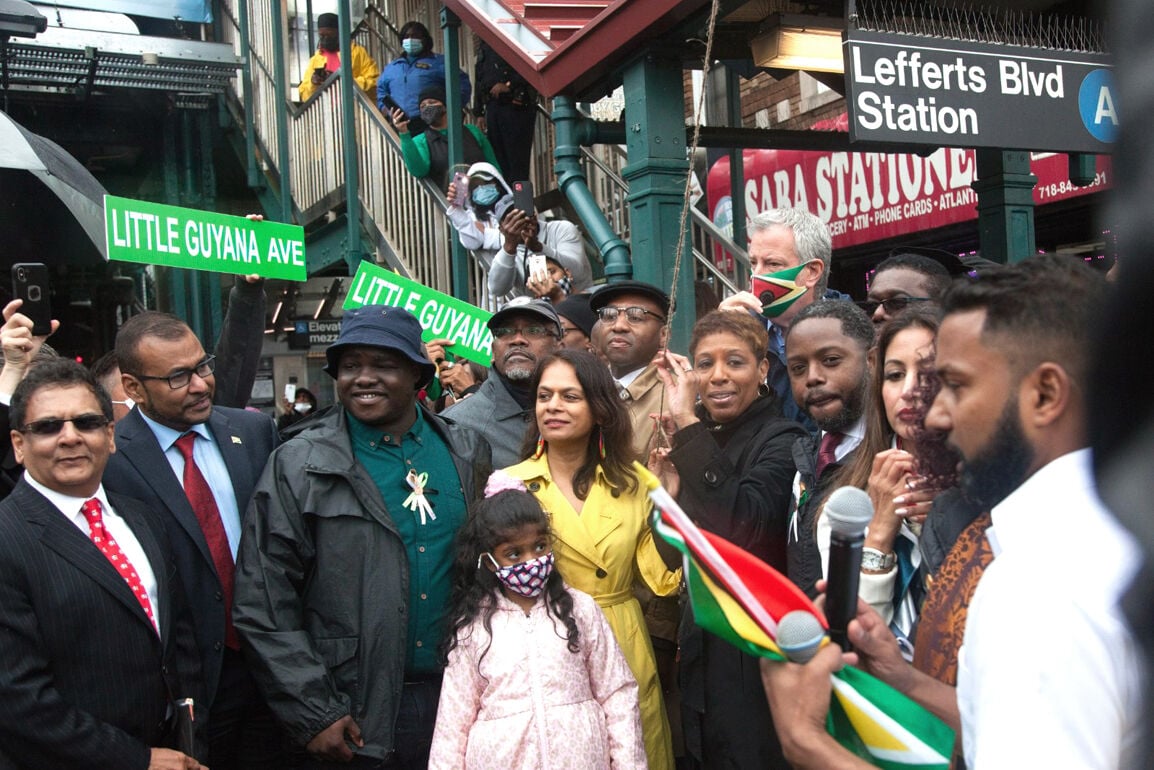 Electeds joined hundreds of Guyanese residents who poured into the intersection of Lefferts Boulevard and Liberty Avenue last Saturday to celebrate the co-naming of Little Guyana Avenue. 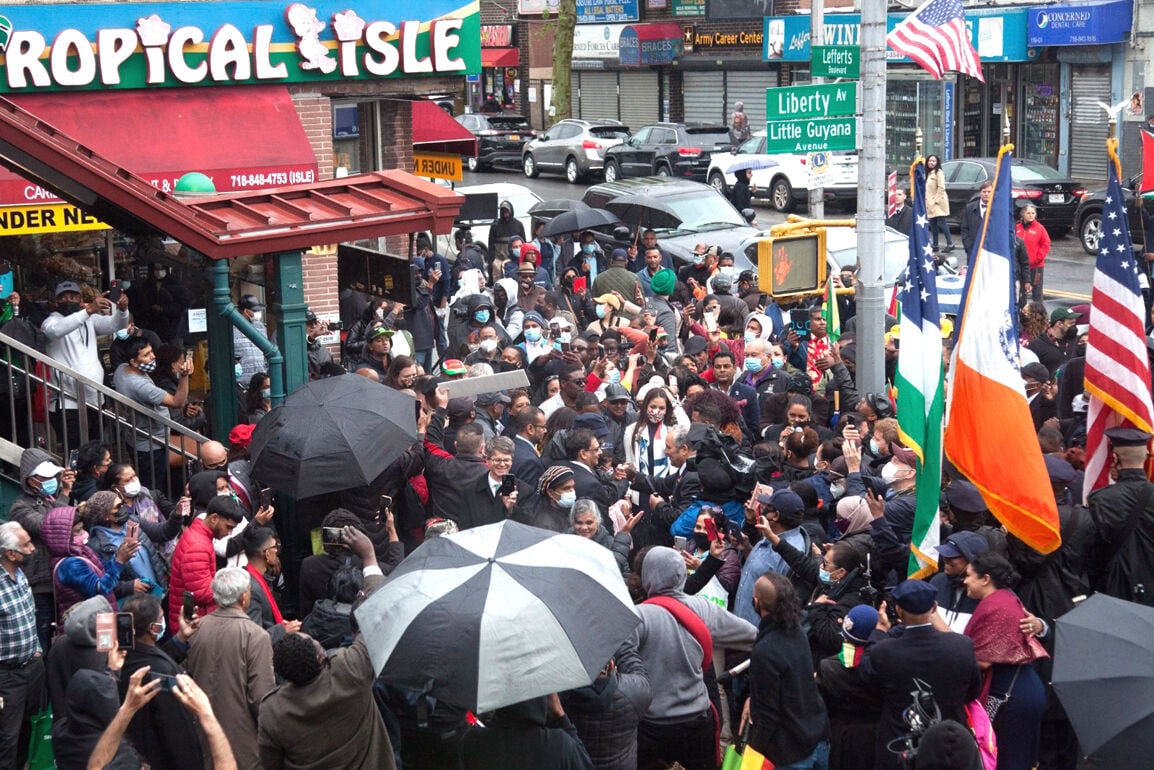 Hundreds of Richmond Hill residents streamed into the intersection of Lefferts Boulevard and Liberty Avenue last Saturday to celebrate the co-naming of “Little Guyana Avenue.” 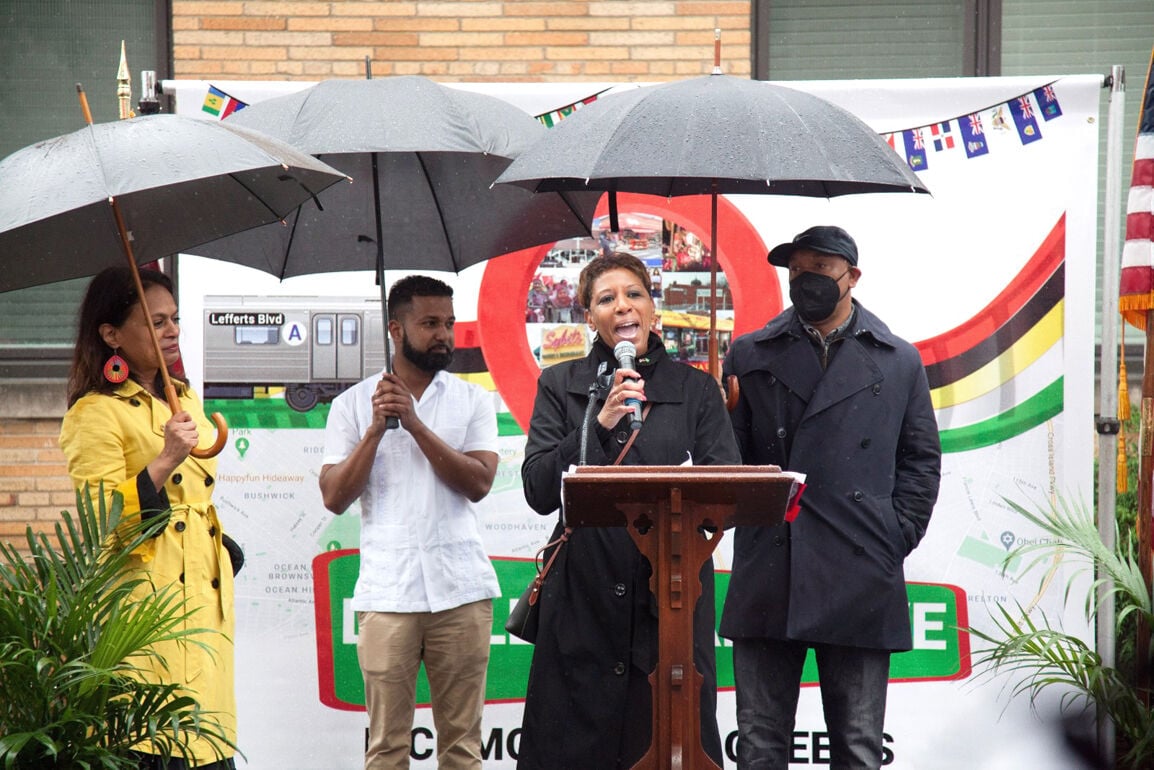 Electeds joined hundreds of Guyanese residents who poured into the intersection of Lefferts Boulevard and Liberty Avenue last Saturday to celebrate the co-naming of Little Guyana Avenue.

Hundreds of Richmond Hill residents streamed into the intersection of Lefferts Boulevard and Liberty Avenue last Saturday to celebrate the co-naming of “Little Guyana Avenue.”

New York City formally recognized the contributions of the Guyanese community in Queens last Saturday with the long-requested co-naming of the intersection of Lefferts Boulevard and Liberty Avenue as Little Guyana Avenue.

The stretch of Liberty Avenue from Woodhaven Boulevard to the Van Wyck Expressway has been known as Little Guyana for decades. At the ultimate stop of the elevated A train at the Lefferts Boulevard station, where the new street sign is located, the neighborhood abounds in Indo-Caribbean bakeries, outdoor produce markets and many other Guyanese businesses.

The co-naming was introduced to the Council by Councilmember Adrienne Adams (D-Jamaica) after Democratic District Leader Richard David and other commnuity activists advocated for it.

It’s the third of Adams’ efforts this year to honor the area’s South Asian and Indo-Caribbean populations through street renamings. Adams also introduced legislation to co-name the stretch of 101st Avenue between 111th and 123rd streets “Punjab Way” and that of 97th Avenue between Lefferts Boulevard and 117th Street “Gurdwara Street,” after a Sikh place of worship.

“Richmond Hill means so much to me that I wanted to make an invisible community visible,” said Adams, who celebrated having a Guyanese mother-in-law at the event.

“You will never be invisible. You will always have a seat at the table as long as I am fighting for you.”

The event coincides with Adams’ run for re-election against opponents in District 28, which extends over parts of Jamaica, Rochdale Village, Richmond Hill, and South Ozone Park. Her remarks, introduced by emcees David and Annetta Seecharran, executive director of Chhaya CDC, were received with enthusiasm.

Despite consistent rain throughout the celebration, Saturday’s event drew hundreds of neighbors as well as a bevy of Guyanese community advocates and Queens electeds. It also brought out the Guyanese foreign secretary, Mayor de Blasio and a Guyanese dancehall artist named Terry Gajraj, whose performance had them all dancing on stage together in the rain.

“I want to say I see you, I respect you, I appreciate you,” said de Blasio. “Guyana has not only done so much for New York City but represents such possibilities — people of different faiths, ethnicities coming together as one.”

Since the 1960s, hundreds of thousands of Guyanese have immigrated to New York to make it their home. Prominent Guyanese-American New Yorkers include former Congresswoman Shirley Chisholm and Queens Borough President Helen Marshall.

The Guyanese are the second-largest foreign-born population immigrant group in Queens, based on the 2010 Census. New York City boasts the largest population of Guyanese people outside the country itself.

Guyanese Foreign Secretary Robert Persaud, a former minister of the People’s Progressive Party/Civic government, pointed out how the event came three days after the country marked its 55th anniversary of independence from Britain.

The symbolic moment comes after years of lobbying from Guyanese advocates to get more recognition and resources from the city. Last January, David raised the idea of a community center aimed at serving the Indo-Caribbean community, something that he said has been appearing on the Queens Community Board 9 statement of needs for years.

He also proposed investments, both into marketing and beautification efforts on Liberty Avenue, to help turn the area into a cultural district on par with Manhattan’s Chinatown.

Ashook Ramsaran, president of Indian Diaspora Council International, who gave a speech vaunting the Guyanese “strong roots” in New York City and celebrating the diaspora’s economic success in Richmond Hill, told the Chronicle that a task such as a cultural district would take time because of the many ethnic groups that call the neighborhood home.