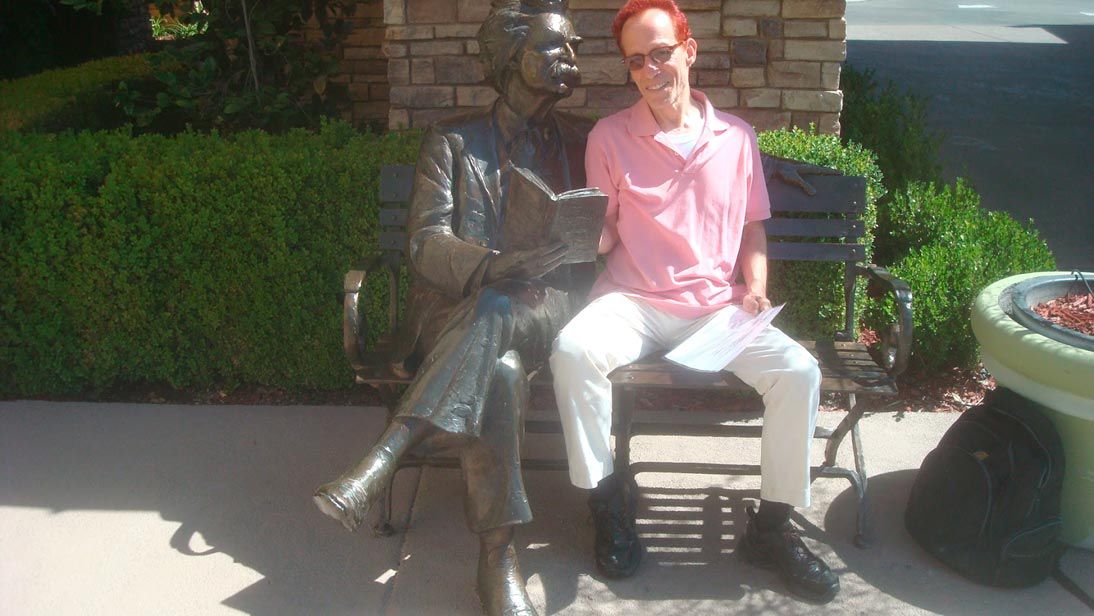 The Italian town of Monterosso Calabro will be honoring Flushing poet Vincent Tomeo, here with Mark Twain, by unveiling a marble inscription of his piece, “A View from a Tower in Calabria.” 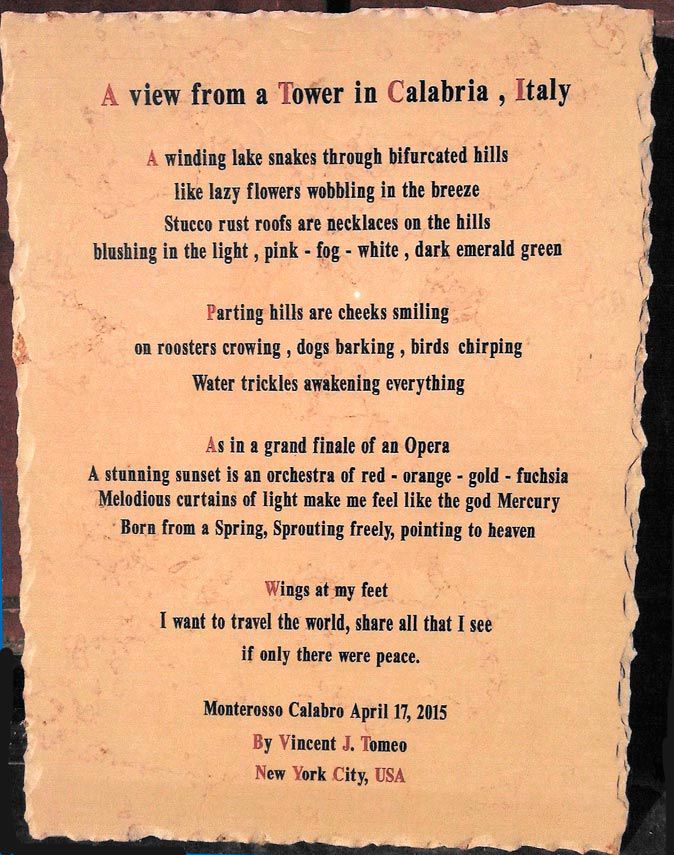 The text of Tomeo’s award-winning “A View from a Tower in Calabria” piece.

The Italian town of Monterosso Calabro will be honoring Flushing poet Vincent Tomeo, here with Mark Twain, by unveiling a marble inscription of his piece, “A View from a Tower in Calabria.”

The text of Tomeo’s award-winning “A View from a Tower in Calabria” piece.

Words can move people, something this accomplished Queens poet can attest to.

Published Flushing writer Vincent Tomeo will be honored by the town of Monterosso Calabro in Calabria, Italy on April 6 for “A View from a Tower in Calabria,” his 2015 poem about the rustic city’s beauty.

At the ceremony, which Tomeo will attend, town officials will unveil a marble sculpture featuring the poem before throwing a celebration in the writer’s name.

The finished product will be mounted at Agriturismo Villa Velia.

Antonio Parisi, the owner of the villa, arranged for the poem to be sculpted in marble — with architect Antonio Lore being given the job — one year after Tomeo read it to him in 2015, the artist citing the piece as his reason for being late to dinner.

Parisi was touched by the poem and, as a patron of the arts, took it upon himself to find a way to have it be recognized. After keeping in touch with Tomeo via email for two years, Parisi did just that.

“What I can’t fathom is how a man, a complete stranger, would do that for someone,” Tomeo said in an interview with the Chronicle. “It’s just remarkable.”

“A View from a Tower in Calabria” is Tomeo’s most acclaimed work among his other 747 poems and essays that have been published in various magazines, newspapers and anthologies.

The 69-year-old was recognized in “Poets Without Borders” by the Alabama State Poetry Society as a premier international poet. He has also won 99 poetry awards and has recited 66 public readings in the United States, as well as Turkey, Australia and New Zealand.

“Poetry is an intricate part of my life,” Tomeo said, “I love to write.”

In the “Calabria” poem, he describes, “A winding lake snakes through bifurcated hills like lazy flowers wobbling in the breeze, Stucco rust roofs are necklaces on the hills blushing in the light, pink-fog-white, dark emerald green.”

In the final stanza, Tomeo wishes to travel the world and share what he sees but, “if only there were peace.”

“To be cast in marble, only an Italian would do something like that,” he said. “Their appreciation for aesthetics, love, life, art, food, music, opera — they just love life, and this man saw something that touched him and he wanted to share.”

What Tomeo hopes for all poets to know is that, “You never know who you’re going to touch.”

His road to poetry was not a typical one.

In 1988 he was diagnosed with multiple sclerosis optic neuritis, causing him to lose his sight.

A teacher at Francis Lewis High School at the time, he took a leave of absence and went to poetry therapy for the blind, where he was taught how to record his feelings through writing.

“In the dark, in my rage, I recorded my feelings and when they were played back I thought, ‘Wow this is really good stuff,’” he said. “From that time on I saw the world in a different way, to see things most people pass by. It taught me how to see.”

Tomeo has since gained back his sight, but his focus is still on poetry.

Now, he eagerly awaits going back to Calabria for the grand unveiling of his marbled poem next month.

The only way Tomeo could think to thank Parisi was by writing him a poem called, “Marble Words, A Shrine, and This is An Ode to Antonio Parisi.”

“I don’t know how to thank him enough. I wrote a poem for him and an Italian teacher transcribed it for me,” he said. “I really want to thank him and it’s the perfect time, the two-year anniversary.