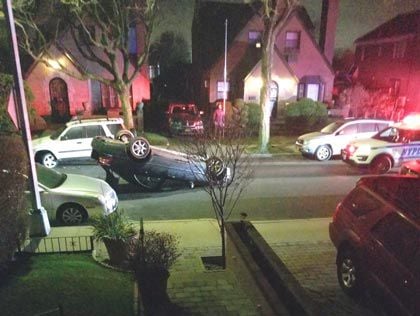 A car crash last Tuesday morning on Fitchett Street in Rego Park has renewed concerns in the community about traffic safety. Residents have reached out to area leaders for new traffic-calming measures as cars have been speeding down the street. 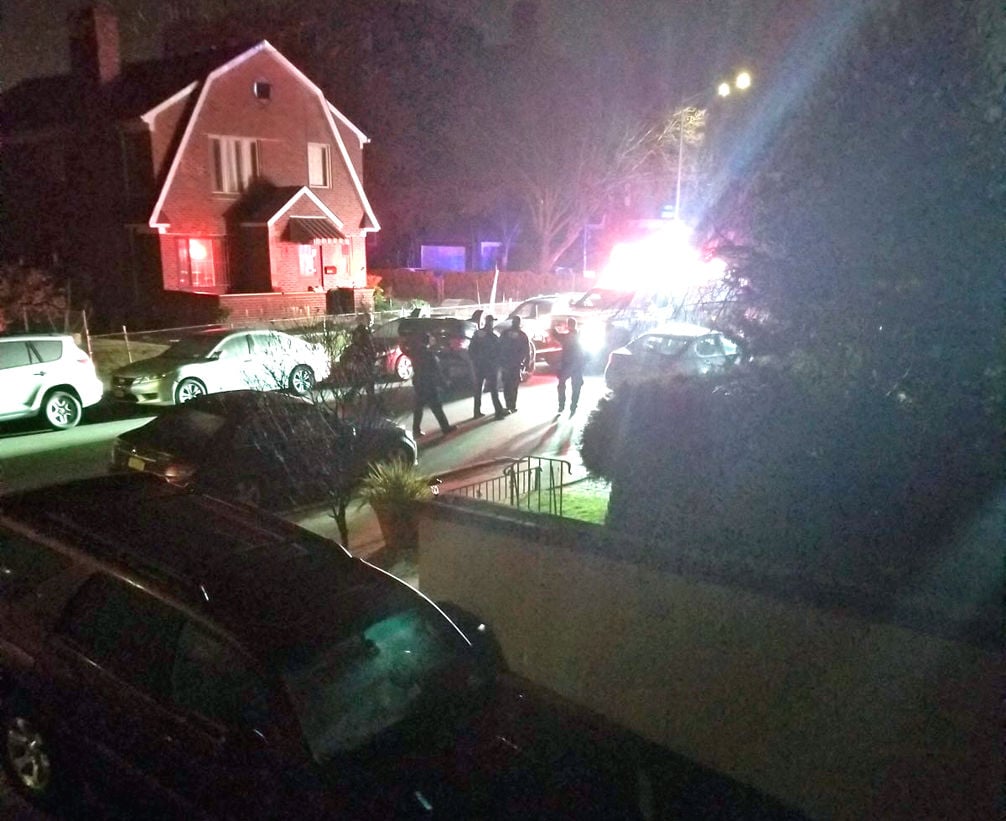 The scene on Fitchett Street after a car crash early last Tuesday. The incident renewed concerns about traffic safety in the area.

A car crash last Tuesday morning on Fitchett Street in Rego Park has renewed concerns in the community about traffic safety. Residents have reached out to area leaders for new traffic-calming measures as cars have been speeding down the street.

The scene on Fitchett Street after a car crash early last Tuesday. The incident renewed concerns about traffic safety in the area.

Some Rego Park residents were awakened last Tuesday at 1:15 a.m. when a car rolled over on Fitchett Street near 64th Road.

Nearby resident Anthony Planakis calls it the “Fitchett Street Speedway.”

The driver lost control of the car, hit a parked vehicle and flipped over. Capt. Jonathan Cermeli, commanding officer of the 112th Precinct, said it appears the driver swerved to avoid something in the road and lost control before the collision.

“What’s amazing is it didn’t hit anything else,” Grecco said.

Residents on the block have been looking for traffic-safety measures in the area for years.

“Somebody’s going to wind up getting killed and then maybe we’ll get something done,” Grecco said.

Heavy traffic on Woodhaven Boulevard has seen Fitchett become a thoroughfare for drivers who speed down the narrow street, which mostly runs parallel with the boulevard, as they avoid the congestion, residents say.

“I grew up on this block. I used to be able to play baseball out on the street,” said Grecco, who was born and raised on the block and moved back 15 years ago. “If cars came down the block, it was rare.”

Planakis and other residents said the bus lanes installed on Woodhaven Boulevard in 2017 has led to more drivers speeding down Fitchett to avoid the traffic caused by having one less lane available each way.

A retired NYPD detective who ran radar on Queens Boulevard for five years with the Queens North Task Force and developed the ability to “guesstimate” car speeds before they appeared on the radar, Planakis said vehicles are exceeding 40 and 50 miles per hour on Fitchett Street.

He noted there are only three stop signs on Fitchett from 63rd Drive to 67th Road.

“They’re picking up speed,” he said of drivers.

“Many of my constituents have contacted my office regarding this stretch of Fitchett Street in fear of their own safety and their families,” Koslowitz wrote, explaining that “the overflow traffic from Woodhaven Boulevard results in drivers often racing down Fitchett Street, far exceeding speed limits, and thus jeopardizing public safety.”

Koslowitz spokesman Michael Cohen told the Chronicle the office will be renewing its request with the precinct for officers to give attention to the area in light of last Tuesday’s incident.

Last June, a resident complained to Community Board 6 about the area and sent a petition with a handful of signatures from those in the community, according to District Manager Frank Gulluscio.

In October, CB 6 wrote a letter to Koslowitz, Cermeli and the city’s Department of Transportation requesting a device to slow down traffic. Gulluscio said the DOT responded by saying it was under study and the study should be finished by April 2021.

Some residents would like more of the street to be made one-way.

“We have active speed hump studies for Fitchett Street, but we have not received a request for a one-way conversion,” the DOT said in an email. “If we receive such a request from CB 6, we would open a study.”

Cermeli told the Chronicle there have been 118 summonses issued within a three-block radius of the corner of Fitchett and 64th Road in the past year.

Grecco said his car was hit two months ago and his wife’s car was also hit in a separate occurrence.

“All my neighbors are losing mirrors,” he said. “I don’t know how many mirrors I’ve lost.”

Grecco is one who would like to see the street turned into a one-way with speed bumps added.

“We have children on the street and there just appears to be no concern for safety,” he said.

The commanding officer said there have been complaints in the past about speeding at PS 174, a nearby school, at 65-10 Dieterle Crescent, and speed bumps have been installed near the entrances of both sides of the school.

“Summons, summons, summons,” he said. “Absolutely summons. Hit ’em and hit ’em hard. That’s what you have to do. That’s the only way you’re going to solve anything over there.”

Fitchett St. has had it with speed demons