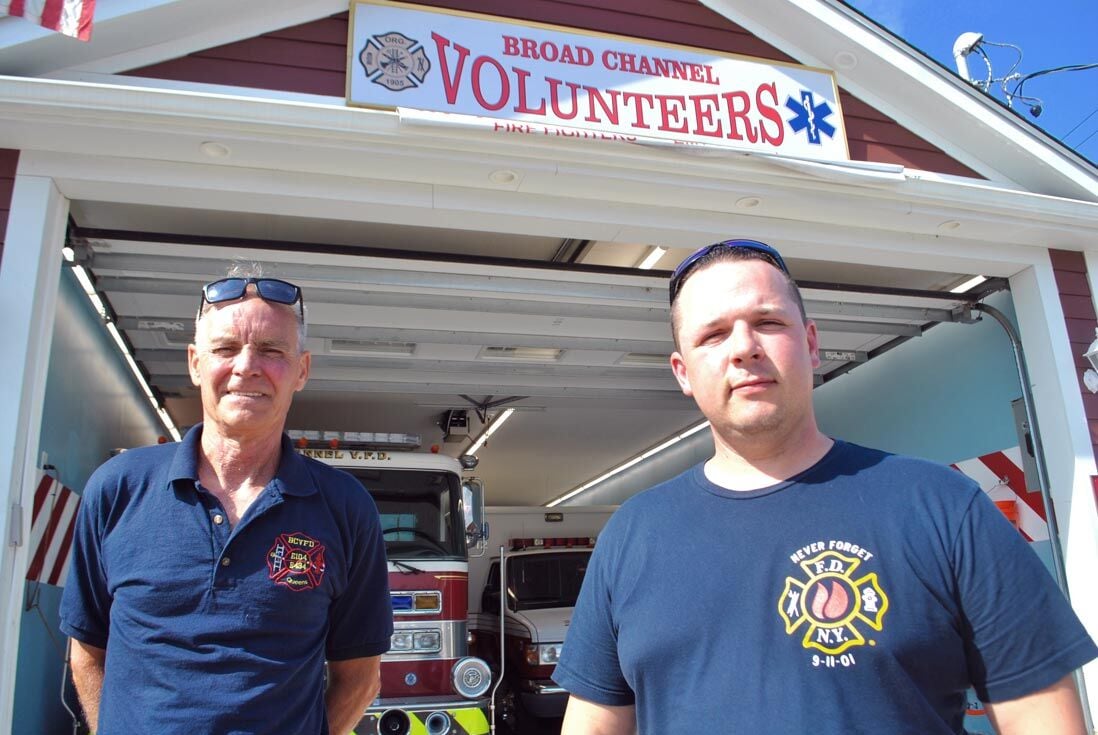 BCVFD Chief Dan Mcintyre, left, and former chief Ed Wilmarth III stand in front of the firehouse dating back to 1908. 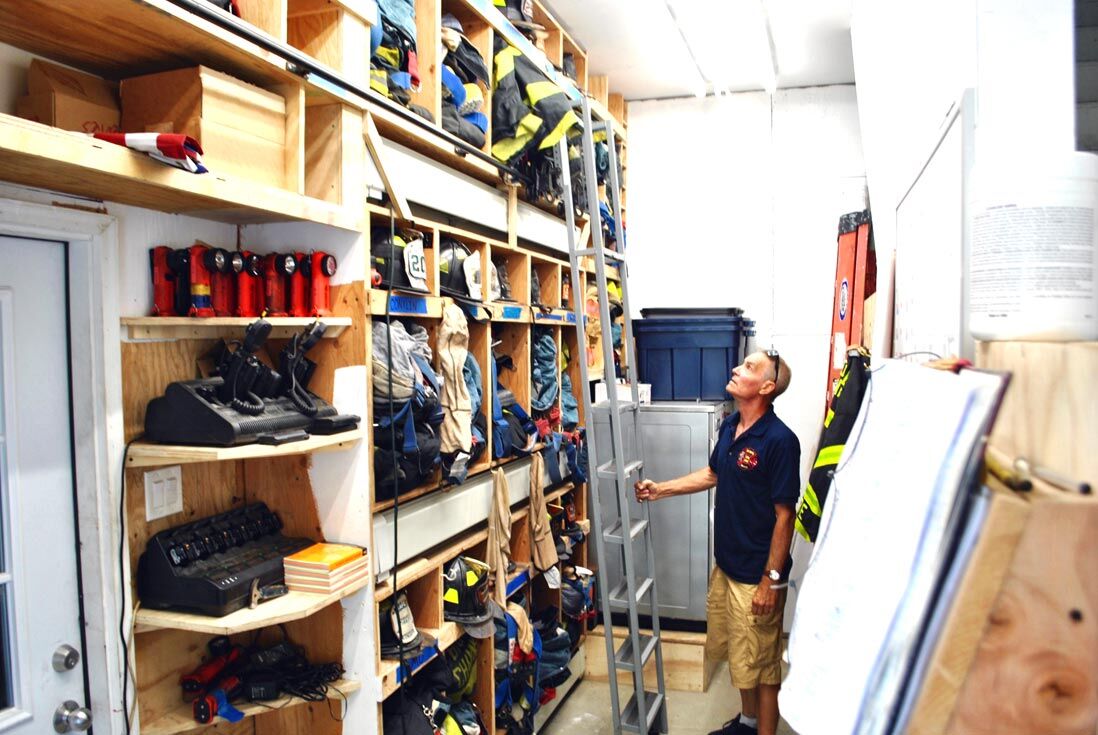 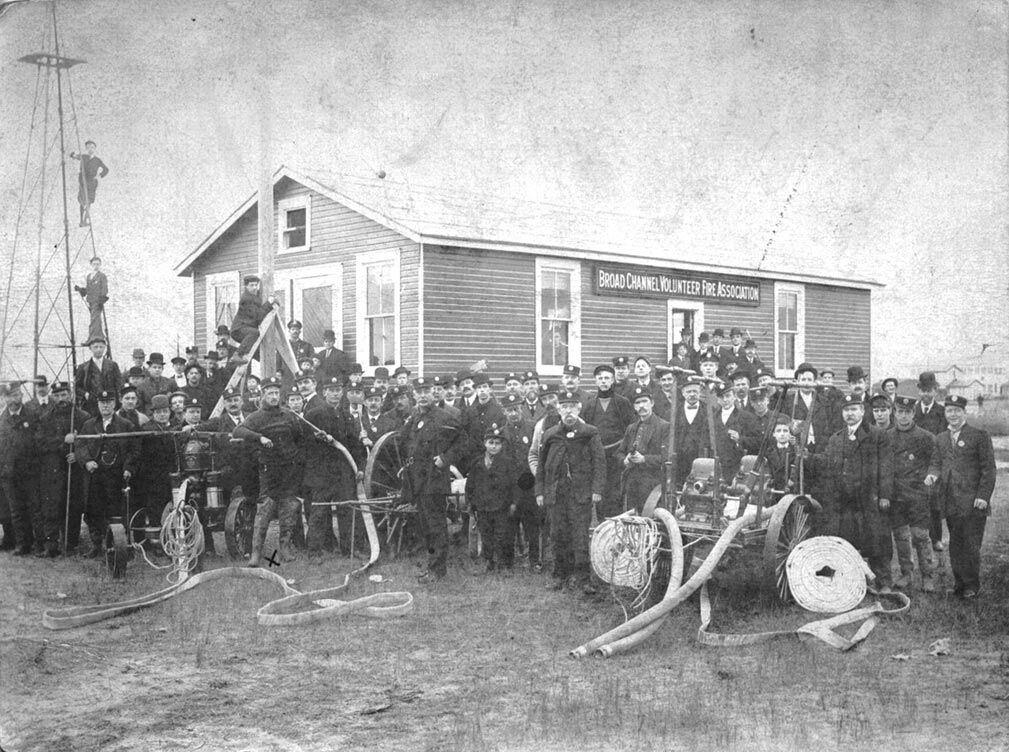 BCVFD members stand in front of the firehouse in 1909. 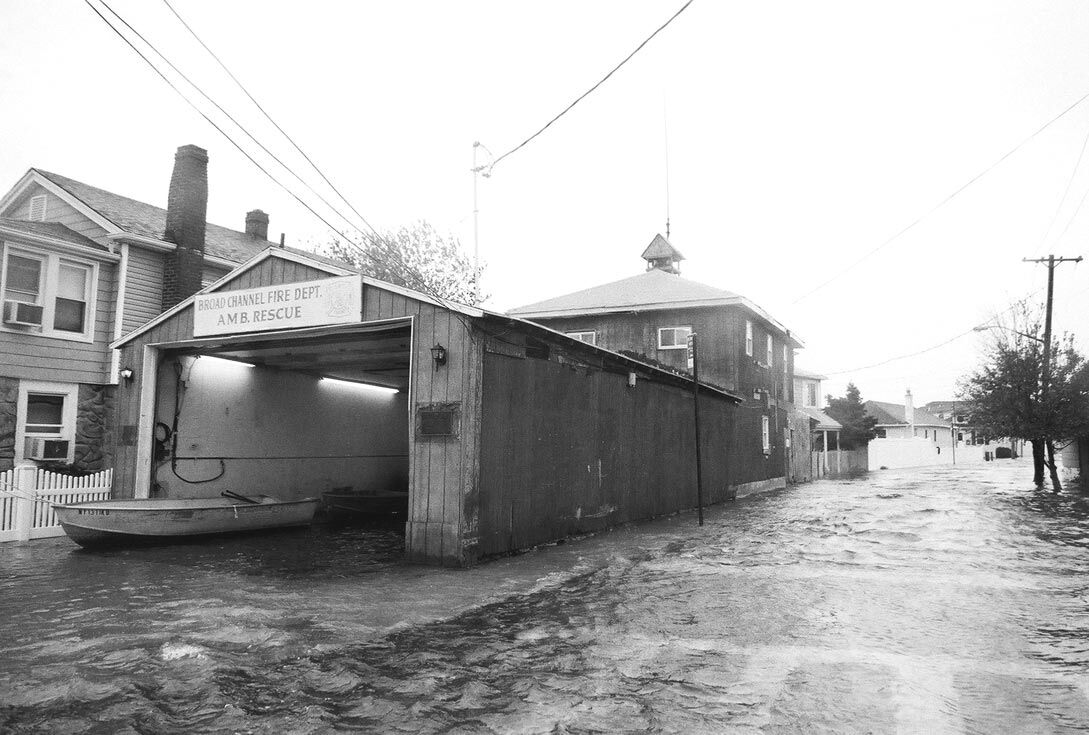 Water begins to flood the firehouse during Sandy’s early onset. 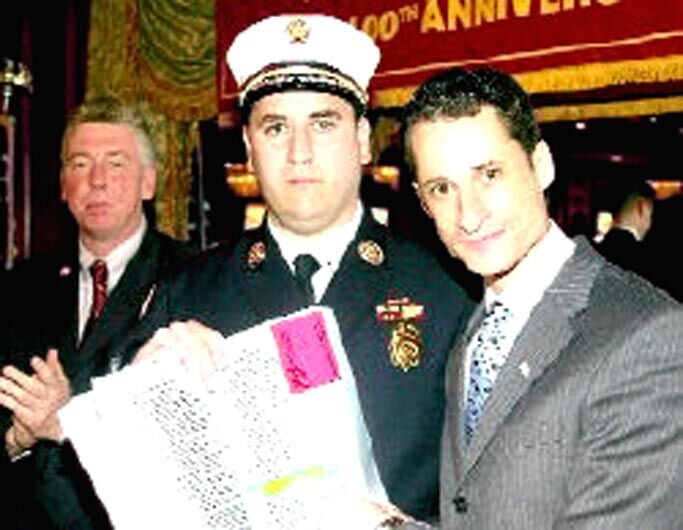 BCVFD Chief Dan Mcintyre, left, and former chief Ed Wilmarth III stand in front of the firehouse dating back to 1908.

BCVFD members stand in front of the firehouse in 1909.

Water begins to flood the firehouse during Sandy’s early onset.

It’s not lost on the Broad Channel Volunteer Fire Department that the island’s most pervasive threat is not fire, but water. In fact, it’s become the guiding principle of the neighborhood’s sole firehouse in its multidecade fight with city bureaucracy to relocate into a new building.

Broad Channel is one of the most low-lying neighborhoods in New York City. It already faces chronic flooding from high tides — a condition that is only becoming more severe over time with climate change, according to the Department of City Planning.

Though the BCFVD does play a vital role in getting to fires before any of the city fire stations in the Rockaways, Chief Dan Mcintyre is also acutely aware of the station’s capacity as the sole emergency services provider to the isolated, and frequently water-logged, land mass.

To that end, the fire department has been struggling to build a new station for its operations and meeting bureaucratic roadblocks for nearly 20 years. In 2005, it looked like it was going to come to fruition when then-Congressman Anthony Weiner and U.S. Senator Hillary Rodham Clinton earmarked $2 million in federal transportation money for the project.

But that was only the beginning for Mcintyre in the grueling endurance contest of acquiring approvals for the project from state and city agencies and then contracting out the work. Sixteen years later, the construction costs have increased, and so have the funding sources in order to make up the difference, but the department will have to pay it out before it can receive the government grants. The firehouse has the land, the designs for the now-$6 million project and even a project labor agreement that will help streamline the process of contracting the construction work. BCVFD just needs a lender to get the project off the ground.

Recently state Sen. Joe Addabbo Jr. (D-Howard Beach) and Tom Grech at the Queens Chamber of Commerce found a bank that seems amenable to acting as a lender, and Mcintyre is optimistic that he could be near to securing the project.

The journey for Mcintyre, who has been chief of the fire department since 1994 with a few breaks, has taught him many things. He’s learned how to write a solar energy proposal, how to apply for FEMA disaster assistance, how to contract a traffic light installation and how to “stalk” the city transportation commissioner for a meeting. In other words, Mcintyre has had to become an expert on the finer points of municipal design and construction to keep the plan alive.

“I think that just because of my nature and that I said I was going to do something way back in 2005, I was going to see it through until they basically told me that the money’s gone and scram,” he said.

But it’s not just for stubbornness that Mcintyre has stuck out his overseeing role in the development of the project. He argues that a new facility will play an integral role in the next superstorm to hit the island. If the planned building had been in place before Superstorm Sandy, the city would have had a fully functional storm center of operations for the department and any city, state or federal agency.

As it was, Sandy put the firehouse under five and a half feet of water, and totaled its fire and EMS trucks, but it didn’t stop the volunteers from using generators to get the house up and running to be a hub for donations and a place where their neighbors could go to wash off the oil that had mixed in with the floodwater in the storm.

The new location, on the other hand, which sits next to the Broad Channel Athletic Club on Cross Bay Boulevard, and was bought by BCVFD back in 1994, has a base flood elevation of almost 13 feet. Once moved, the firehouse will donate its old building to Broad Channel’s historical society.

The building will also have a zero carbon footprint due to its solar engineering, not just for environmental reasons but for the practical goal of bill reduction as well.

Mcintyre pointed out that the firehouse, which historically has maintained a membership of between 25 and 35, has a track record of embracing new technologies out of scrappiness. It was an early adopter of systems that allowed its members to remotely take fire calls so they could maintain 24/7 operation without having a member constantly in the station itself. They adopted the Iam Responding app before it was widely accepted in city firehouses nationwide years later.

They build from a rich tradition of firefighters. Founded in 1905 as a bucket brigade, the BCVFD built the firehouse by 1908 when around 100 people lived in Broad Channel. Its history has an obstinate streak, according to former fire chief and the department’s resident historian Ed Wilmarth III. During World War II, the department was turned into a civil defense unit. When the war ended the city tried to disband the firehouse, and the members had to take the city to court to stay in existence afterward.

“And here we are. We’re still here. If they came out and told us that they were going to build a paid city firehouse on the island of Broad Channel we’d be like great then we can stop doing this s--t, but until that time we’re not going anywhere,” Wilmarth said.